it has been announced that british designer thomas heatherwick is to build a public park and performance space on manhattan’s lower west side. entitled pier55, the project will replace the dilapidated pier 54 with construction expected to start in 2016. costing in excess of $130 million USD, the scheme is being funded primarily by the diller-von furstenberg family who will work alongside the hudson river park trust in developing the site.

heatherwick studio has teamed up with landscape architect mathews nielsen in designing the pier, which will serve as a place of discovery, replete with lush lawns and pathways that offer expansive views of the manhattan skyline. a performance space will serve as one of new york city’s premier venues for music, dance, theater and public art, along with independent community events. the majority of pier55’s programming will be free and low cost, with prices set in accordance with nonprofit programming in new york city. 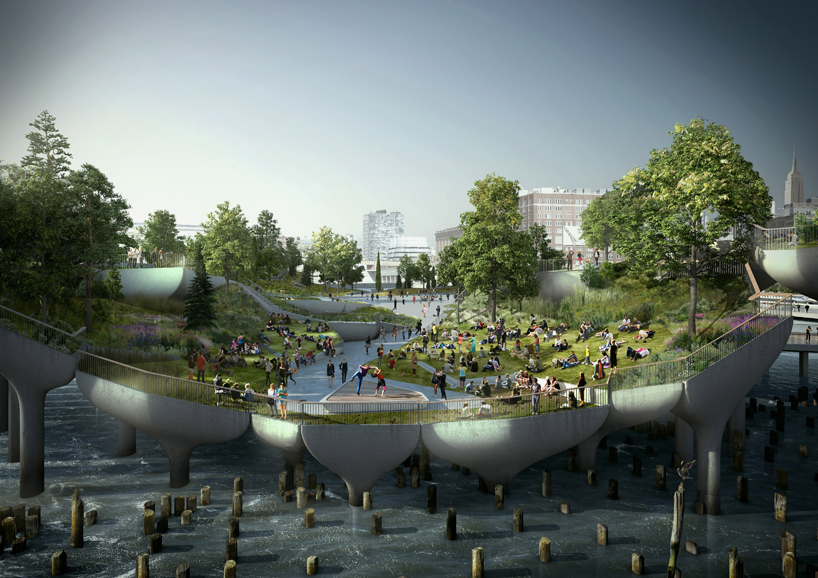 unlike the city’s other piers, the project features varying topographies and intimately crafted environments that create individual physical, visual and cultural experiences for each of the park’s users. the new pier will be will be constructed between the pile fields of piers 54 and 56, which will remain in place in order to provide a lasting fish habitat. 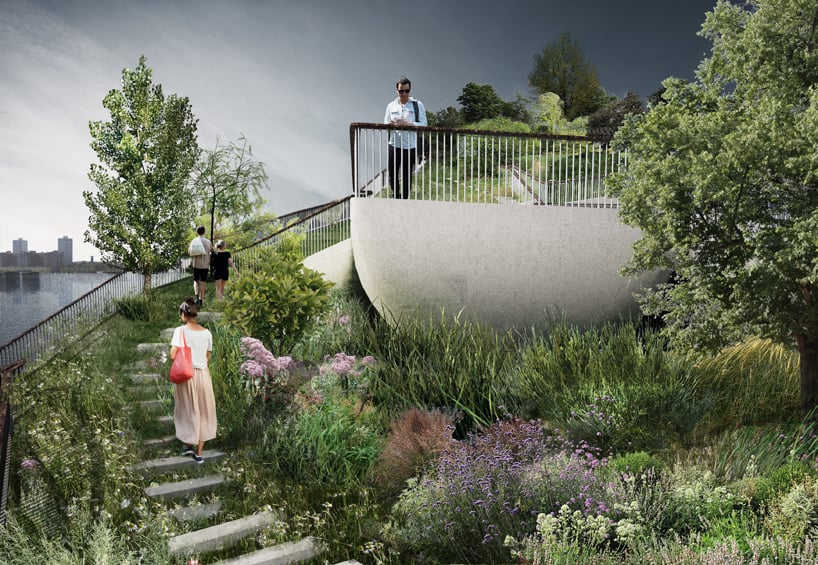 ‘when I was little I used to come to manhattan to visit my great aunt who lived here and never forgot being driven down the west side highway and seeing the fields of disused pile heads sticking out of the river,’ commented thomas heatherwick on the project’s announcement. ‘all these years later, my studio and I are honored to now be growing another set of river piles in the midst of these historic ones to hold up a new phenomenal public park with special spaces for performances. this project is a tribute to the ambition and vision of the hudson river park trust and the diller–von furstenberg family foundation.‘

‘hudson river park has become a destination for millions of new yorkers from across all five boroughs,’ said mayor bill de blasio. ‘the revitalization and transformation of this pier into a vibrant arts and community space will bring new energy and new visitors to our waterfront. we are deeply appreciative of the generosity of great new yorkers like mr. diller and ms. von furstenberg without whom this visionary project would not have been possible.’ 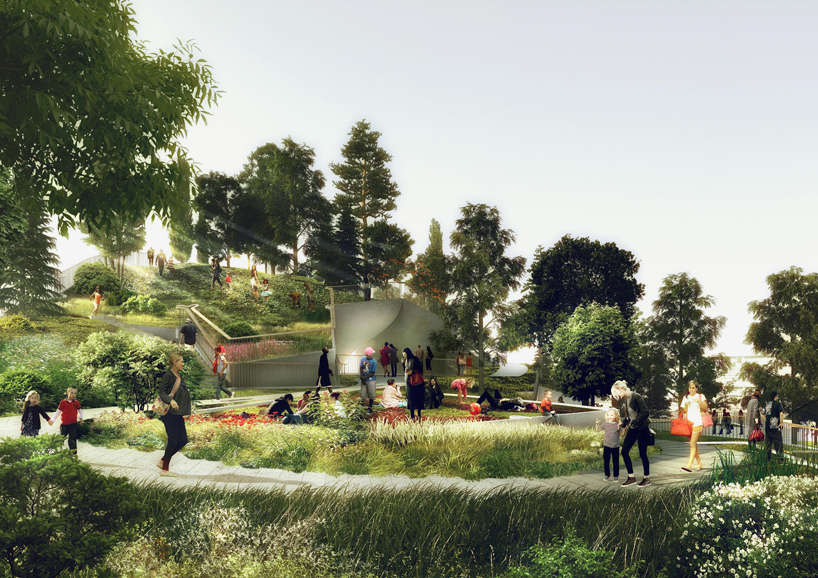 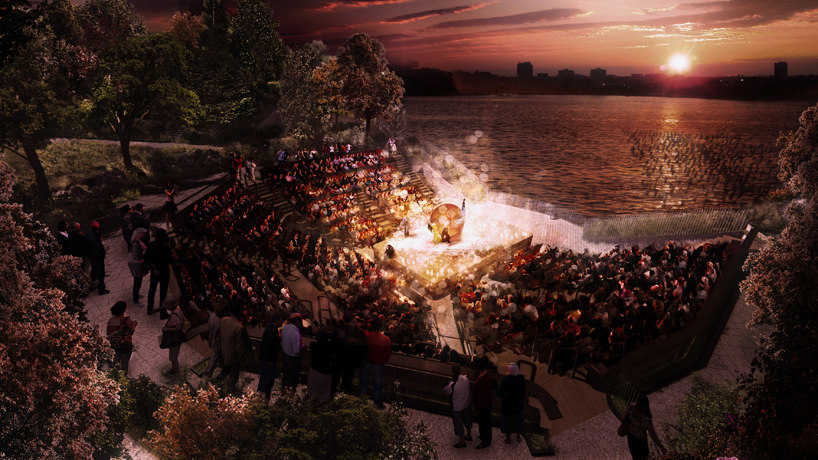 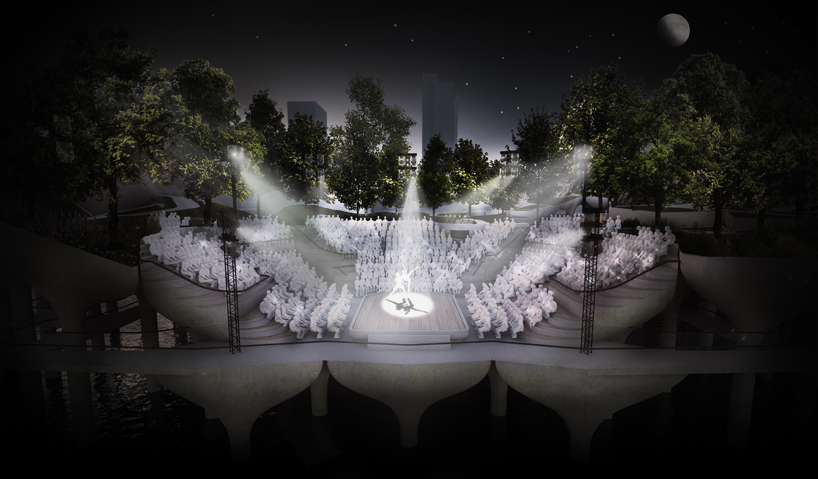 an aerial view of the site at night
image © heatherwick studio 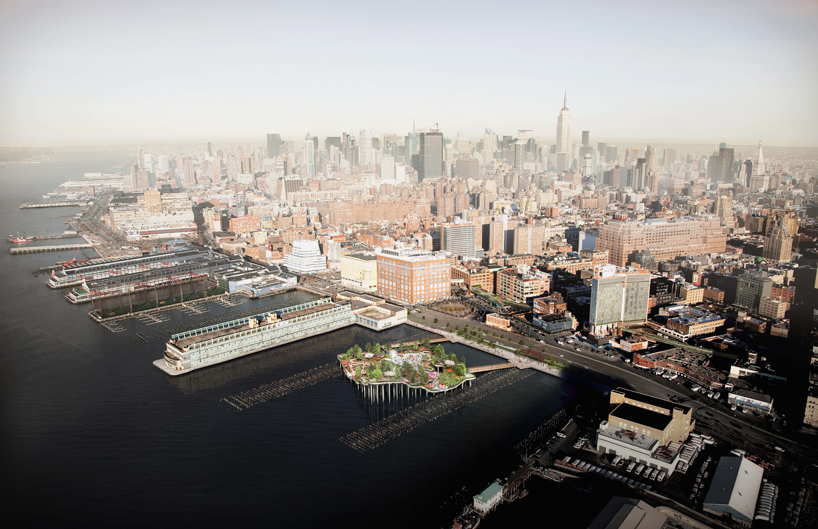