angi and neomam studios have reconstructed three unbuilt houses by american architect frank lloyd wright in 3D floor plans. a pioneer in shaping america’s architectural history, frank lloyd wright lives on through his buildings, influence, and collective imagination. remarkably, more than half of his 1,171 architectural works never took a solid form, and though some occasionally materialize on the american landscape, 660 of his building designs remain confined to paper. ‘wright’s plans are things of beauty, but it’s difficult to imagine what his unrealized sketches might have looked like in real life,’ explains angi. that’s why the team decided to bring three of his unbuilt projects to life as digital renders: mrs. david devin house (chicago, 1896); cottage studio for ayn rand (connecticut, 1946); lake tahoe lodge (lake tahoe, california, 1923). 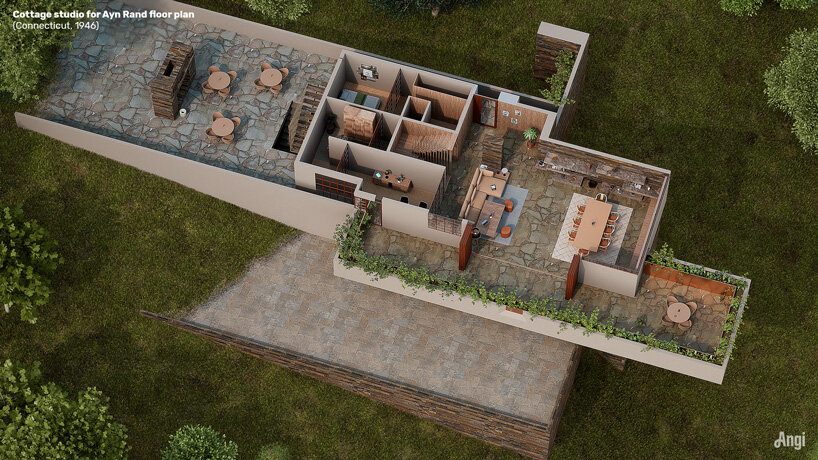 all images courtesy of angi

the angi team brought the three frank lloyd houses to life by producing an exterior render and a 3D detailed floor plan for each home, in collaboration with neomam studios. the first one, mrs. david devin house, was designed for mrs david devin in 1986. ‘there isn’t as much information for this house as some of the others, but the detail in the floor plan is exquisite,’ notes the team. ‘the structure itself looks really beautiful and quite different to some of flw’s other unbuilt houses.’

the second, cottage studio for ayn rand, was designed in 1946 for writer and philosopher ayn rand. ‘in 1937, ayn rand asks frank lloyd wright for an interview to discuss a novel she is writing. years later, she gets a house, or at least this design of a “cottage” (the writing studio on the top level sounds incredible),’  explains angi. ‘the whole story is fascinating, and for those of you who have read the fountainhead, you can guess who she modeled roark on.’ although the house was never built, a a limited number of prints of wright’s rendering were made available. the cantilevered building features asymmetric terraces of concrete or stucco, cascading vines and fountains. a writing studio was planned for the top of the tower, complete with louvered windows to capture light, air and ocean views. 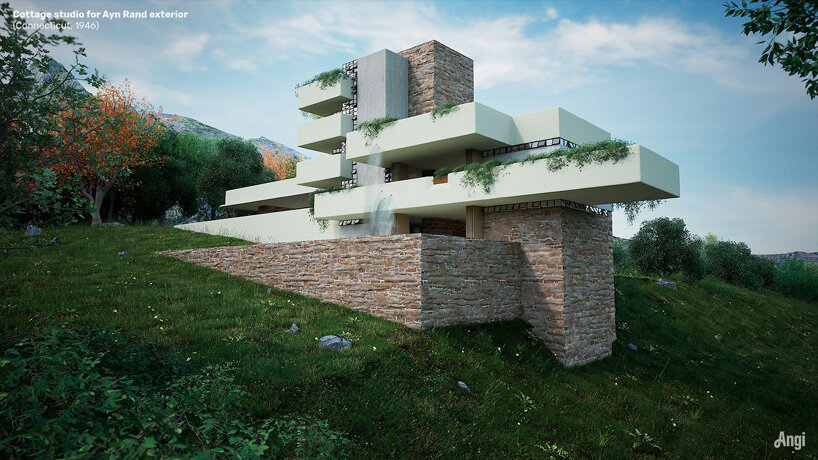 the last project reconstructed in 3D is lake tahoe lodge, which frank lloyd wright began designing in 1923 for a non-commissioned and unbuilt project, the lake tahoe summer colony. ‘here, not only does he imagine an array of cottages along the shore, but also a fleet of cabins afloat in the bay,’ angi notes. this proposal was situated on a site of some 200 acres at the lake tahoe’s southwest corner. 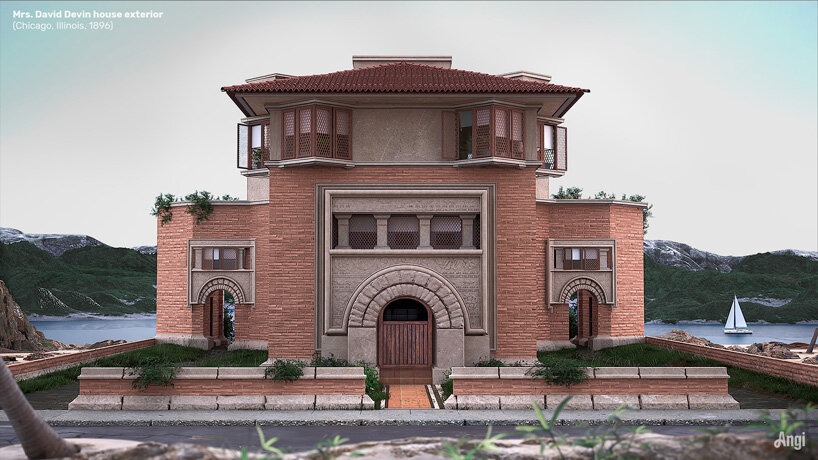 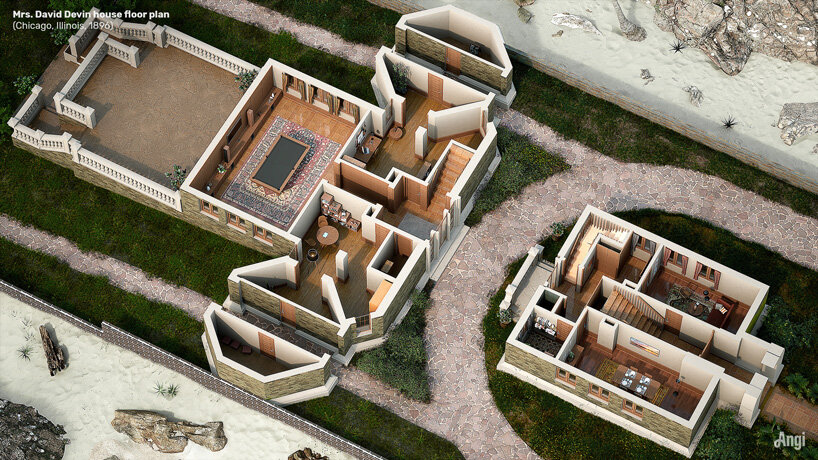 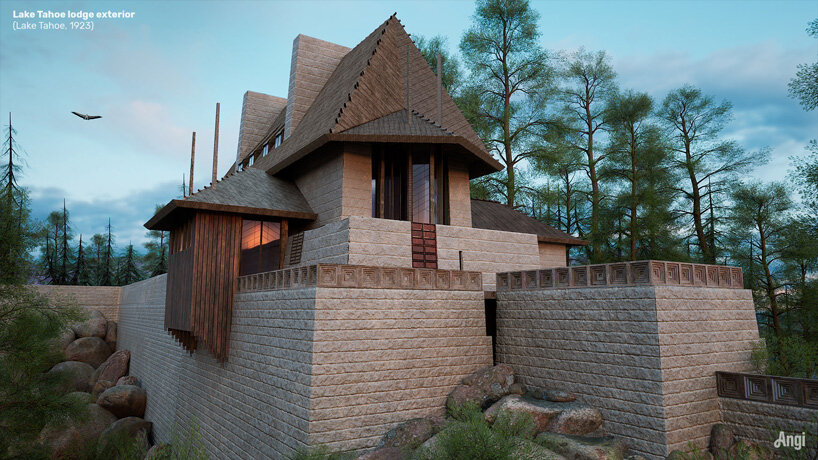 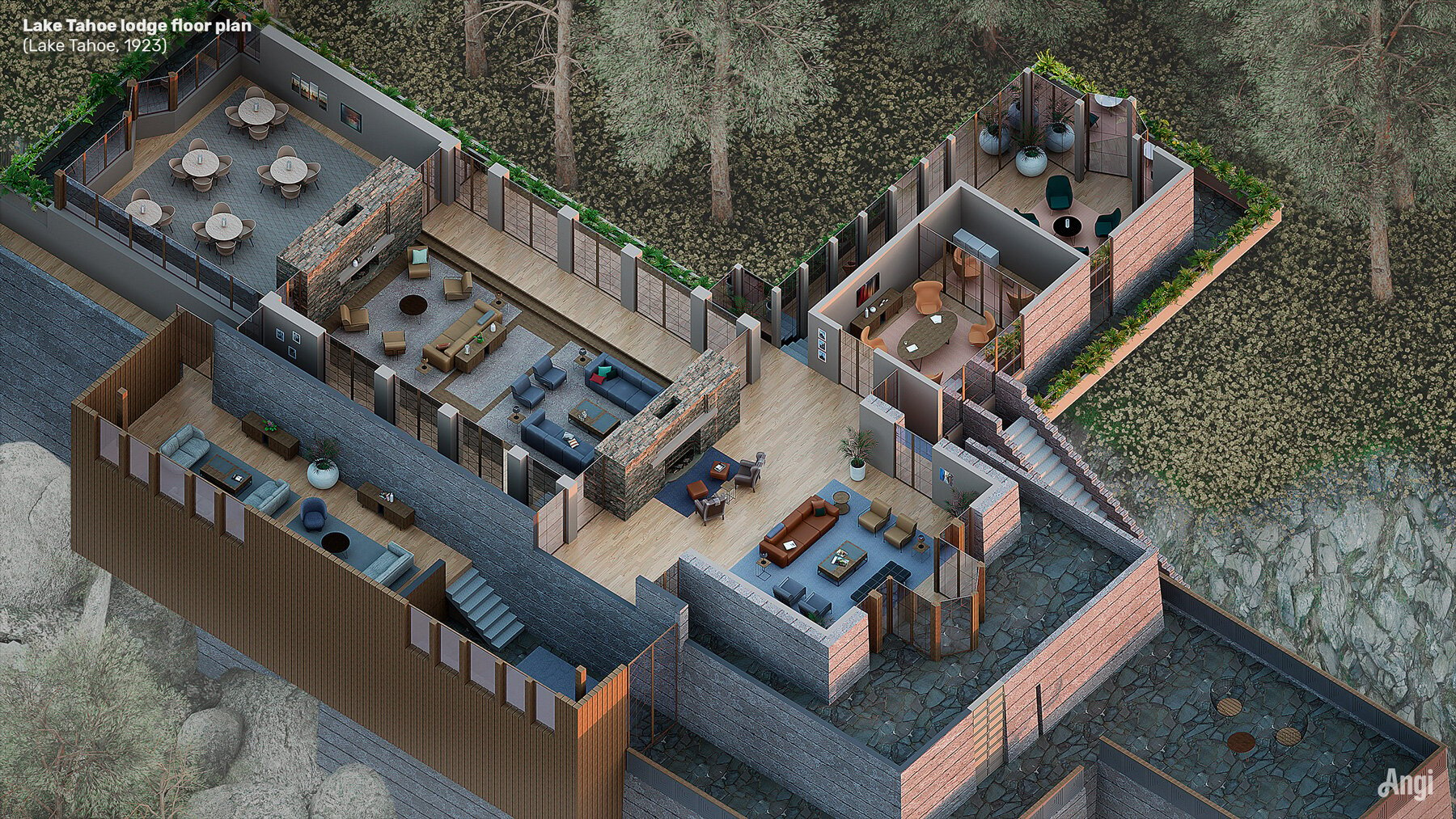