with its panoramic sky views, exquisite marble surfaces, and plush designer objects, you’d be forgiven for mistaking this dreamy penthouse in hangzhou for heaven. in fact, the lavish 430 sqm residence on the 34th floor was realized for mere mortals by luxury interior specialists T.K CHU design.

the brief was to create a multigenerational home that represents the highest living standards of ‘OPUS ONE’, the name of the residential/commercial complex. in response, the designers took inspiration from the project’s sky-high elevation to create an indoor ‘cloudscape’ articulated by light colors and a fun, playful atmosphere. 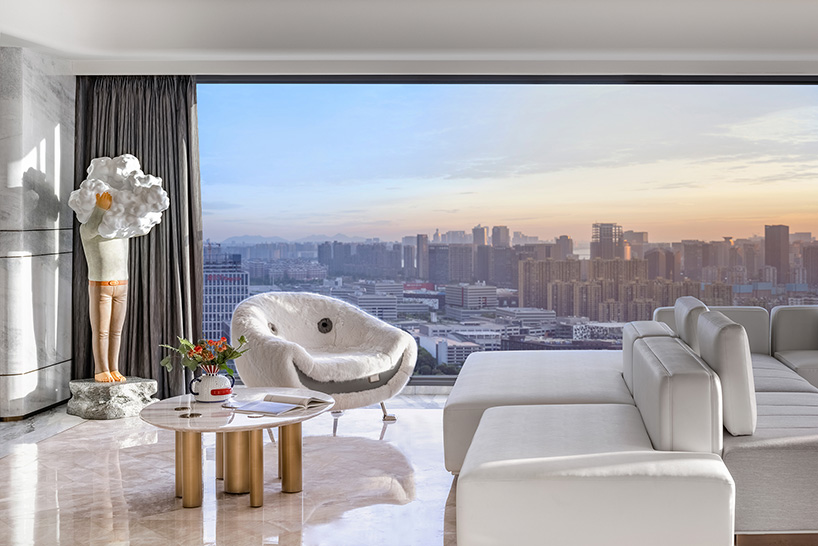 the floor plan is split evenly between public and private zones. the public program comprises an entrance space, lounge, family room, study area, and a palatial open plan kitchen, dining and living room, where the family enjoys food and parties with friends.

the private half of the scheme contains all the bedrooms. to avoid any disturbance caused by the generations’ different lifestyles, T.K CHU planned the grandparents’ suite at a distance from the children’s bedroom and the parents’ master suite. over half of the master suite is reserved for a bathroom and walk-in closet, responding to the needs of the client’s stylish way of life. 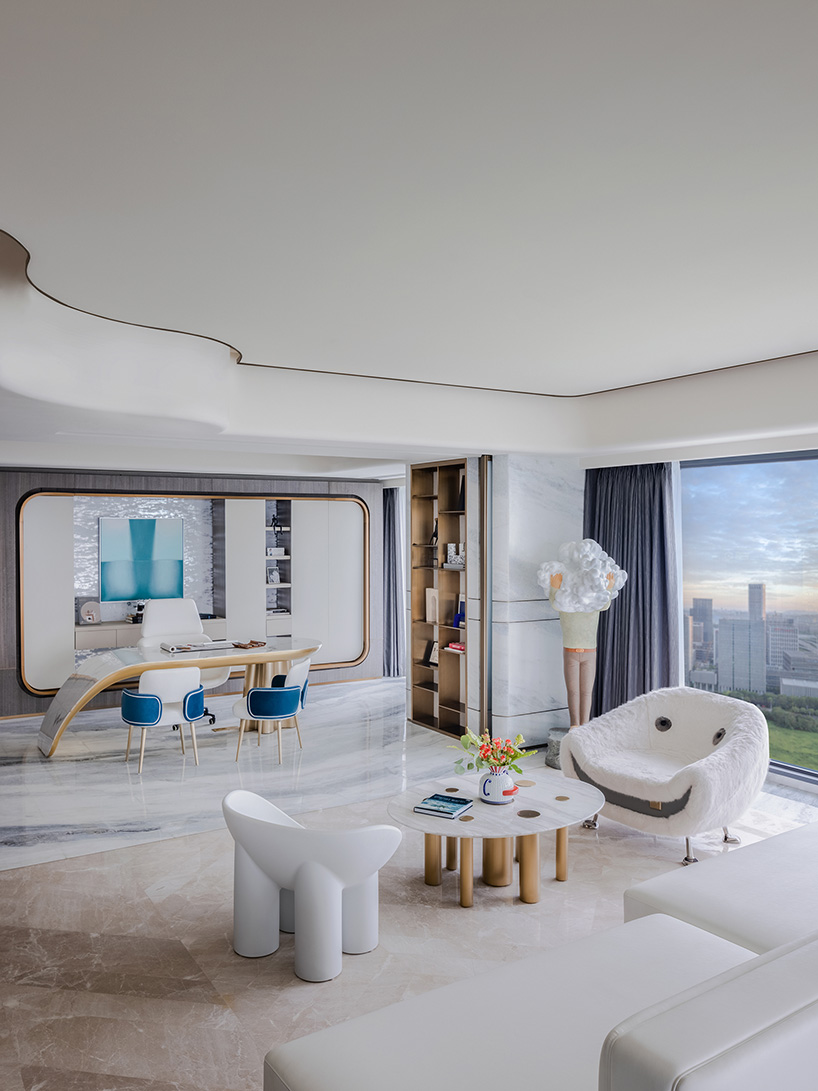 in addition to the cloudscape concept, which gives the space its light and airy aesthetic, the penthouse of OPUS ONE is shaped by the theme of ‘kidult’, which T.K CHU describes as ‘an awareness of the joy of life and the innocence of perpetual creation’. objects and artwork have been selected based on this theme. an art piece named ‘act like a child’ sits at the entrance. it’s shaped like a kid covered with clouds and was specially created by T.K CHU to convey the concept of freedom, naturalism, and ‘kidultism’.

a sculpture by tengfei yang stands by the window, next to which is a fluffy smiling chair created by T.K home — T.K CHU’s sister company — named ‘grinning & silver tooth’ that faces a vase by jamie hayon. the dining table and chairs by T.K home sit below a lotus-leaf-shaped ceiling lamp to create a dramatic dining experience. on the table is a clown-shaped corkscrew, a masterpiece of alessandro mendini. it decorates the dining table and echoes the circus-themed floor lamp and decanter by tom dixon. 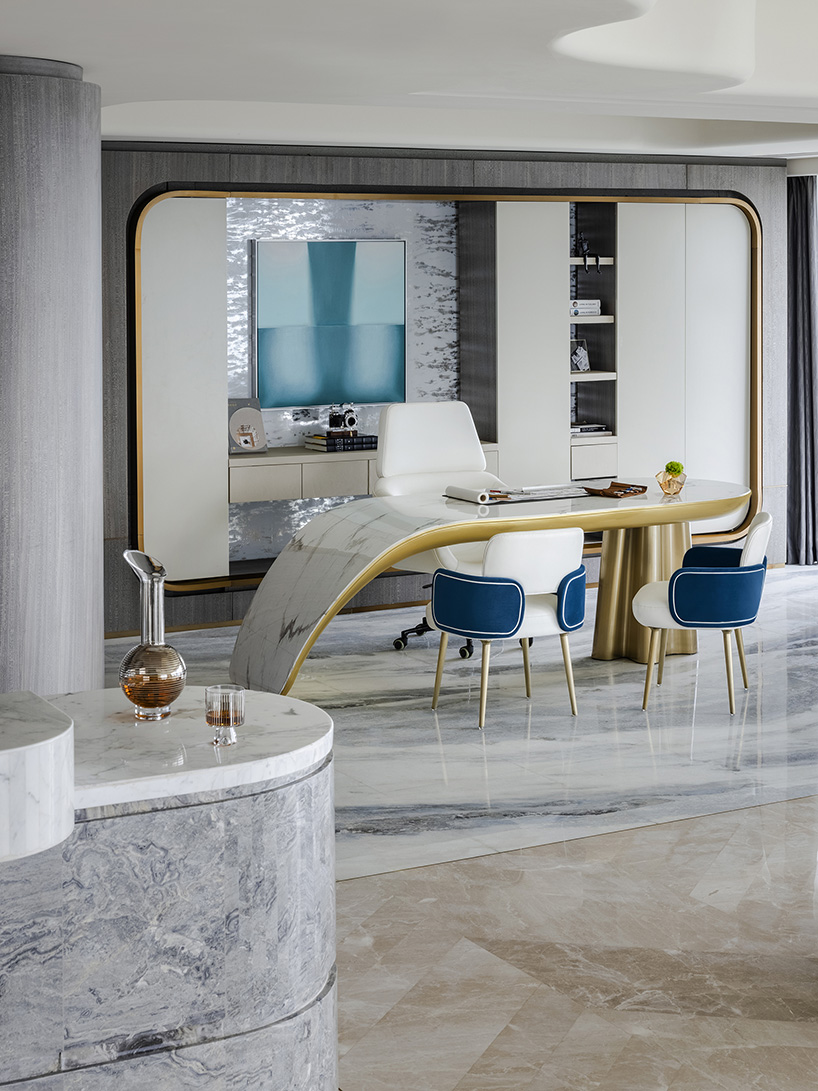 more playful pieces by T.K home include the chairs and sofa in the study area from a series called ‘gleeful dimples’. there’s also the ‘smile :p’ series, which made its first appearance for the penthouse. based on the family stories of T.K CHU, the series is a materialization of liberal art and free-thinking.

there are only two partitions in the public space. one is a removable wall of corrugated glass that closes off the study area, the other is an electric fireplace. the latter, with white-gradient glass to evoke thick clouds, distinguishes the living room from the dining room, which becomes the visual focus and sets the conceptual axis of the whole design. when turned on, the blazing fire complements the spectacular sunrise outside the window. 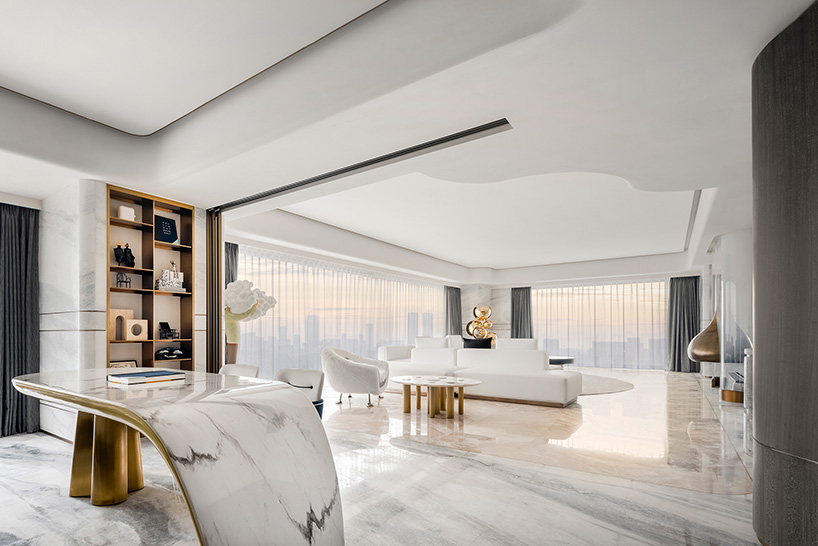 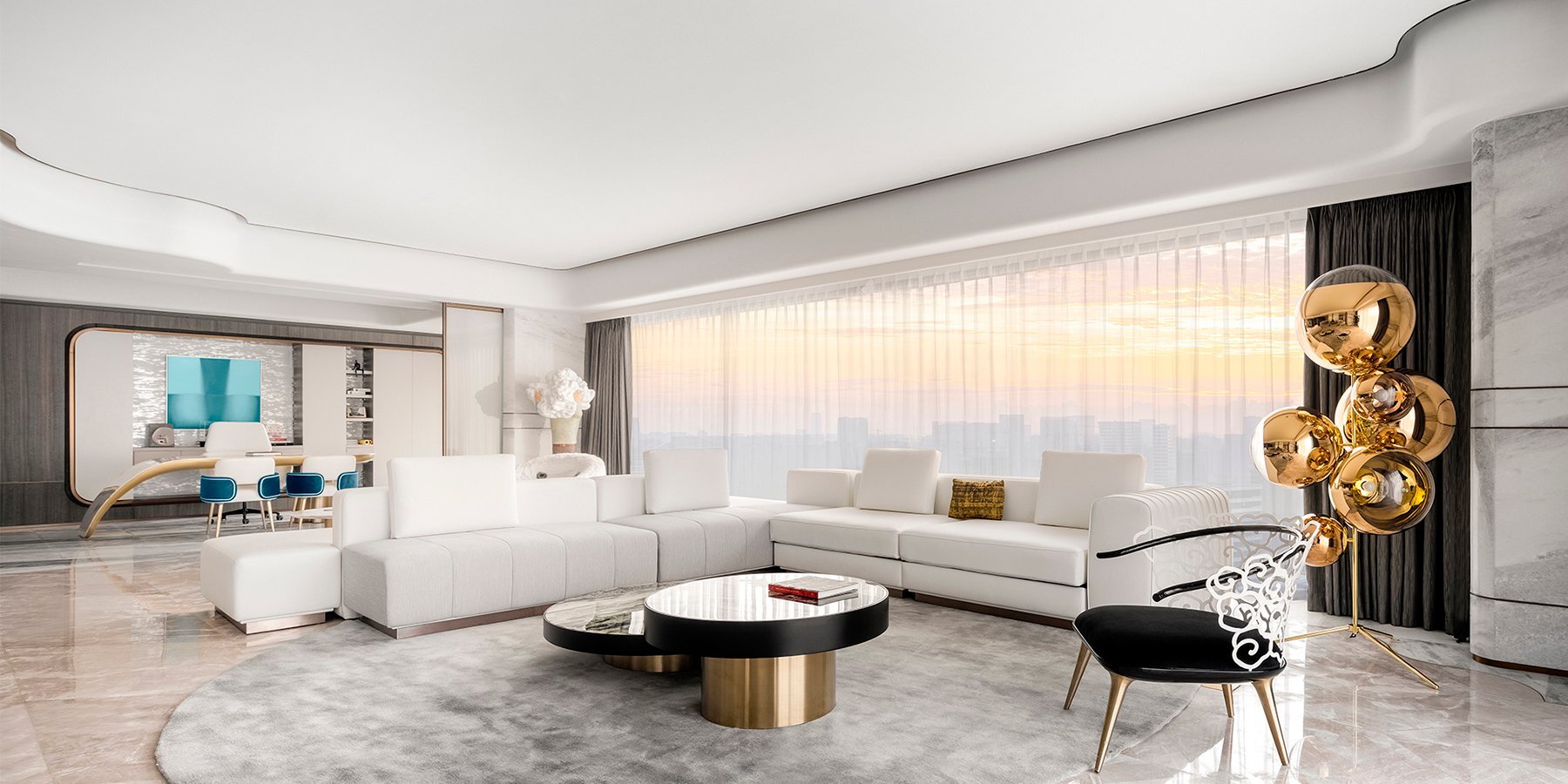 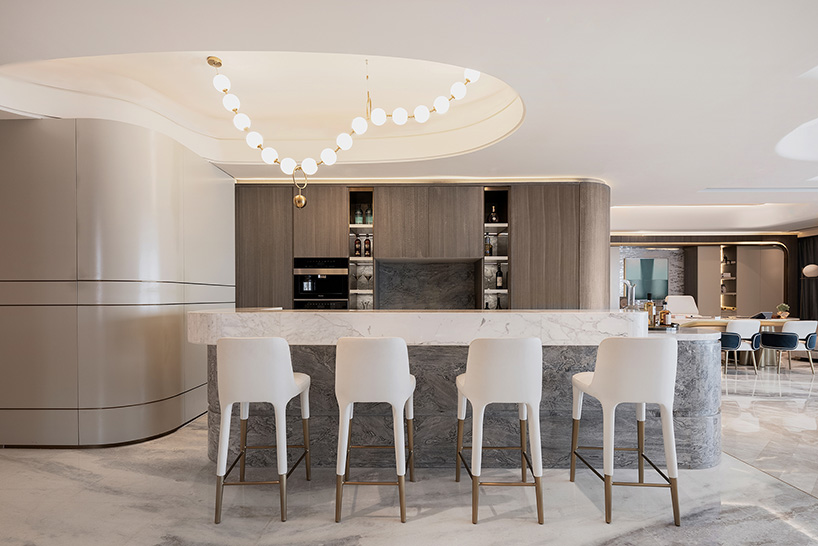 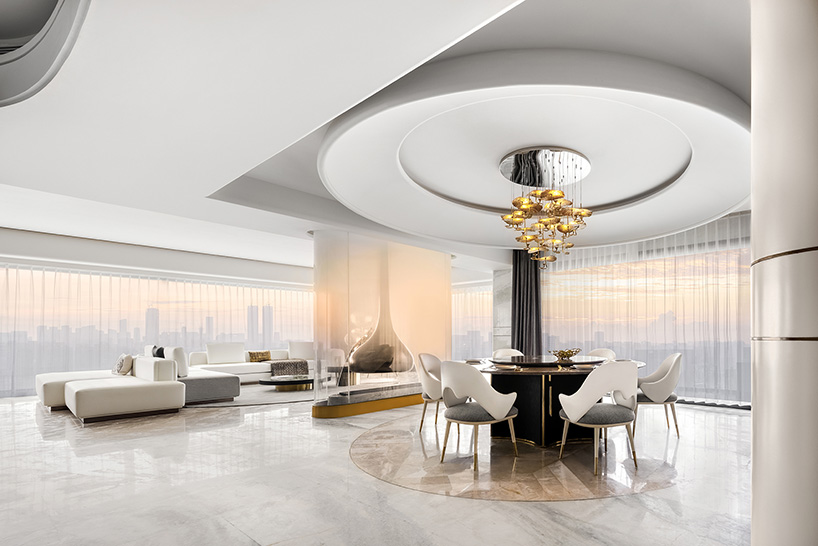 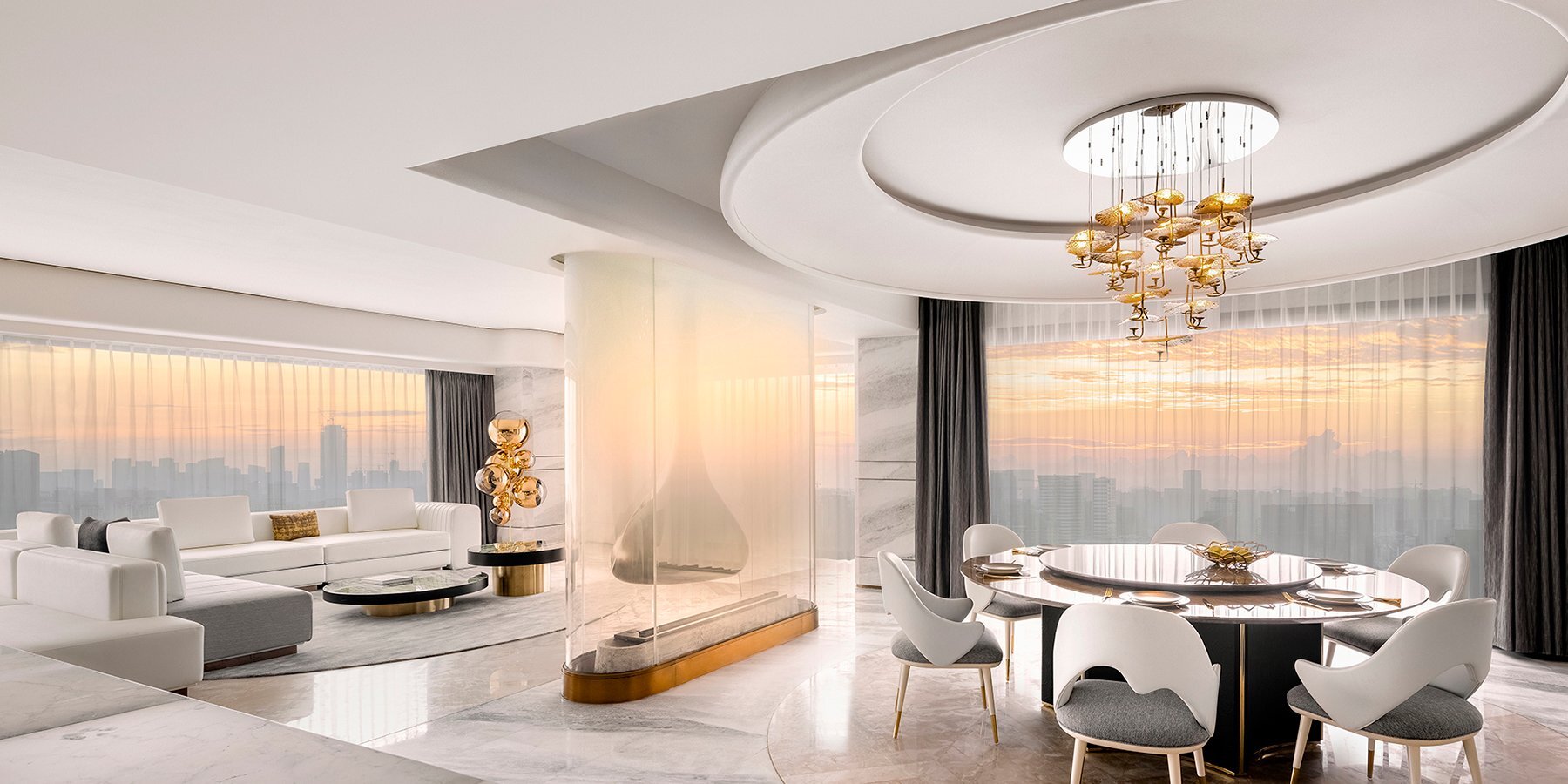 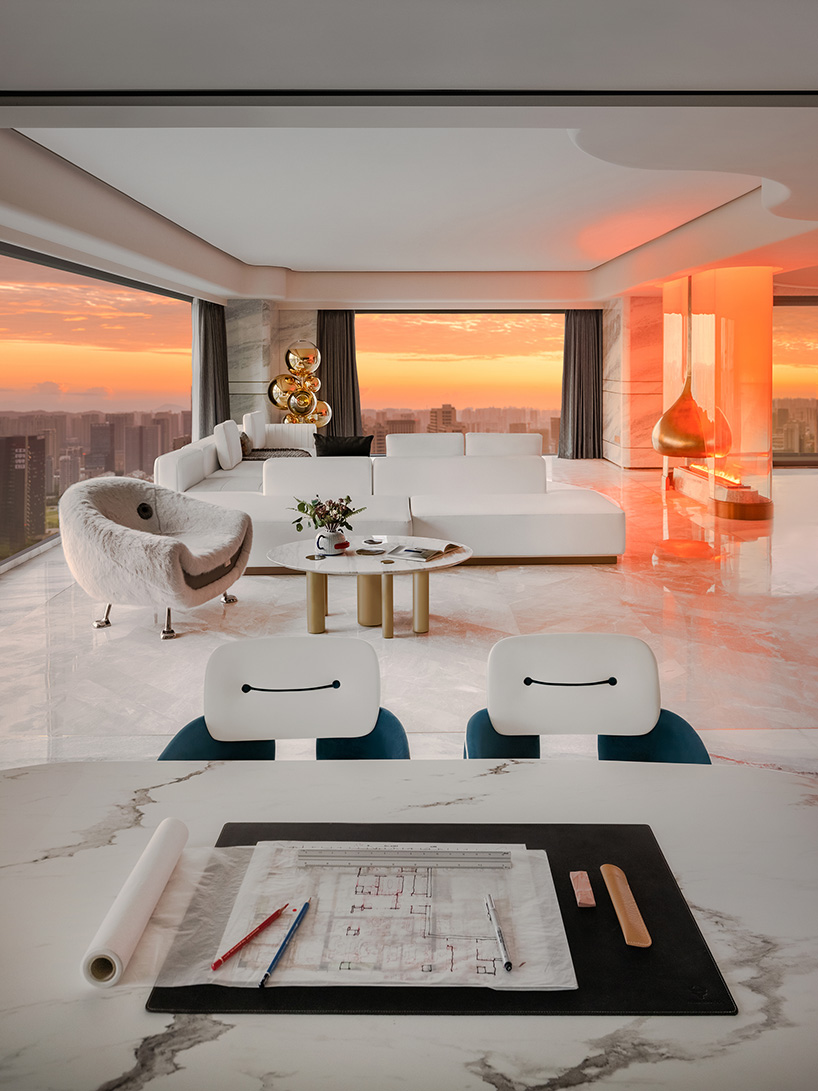 the living space features a double sided sofa, which seperates the living and study area 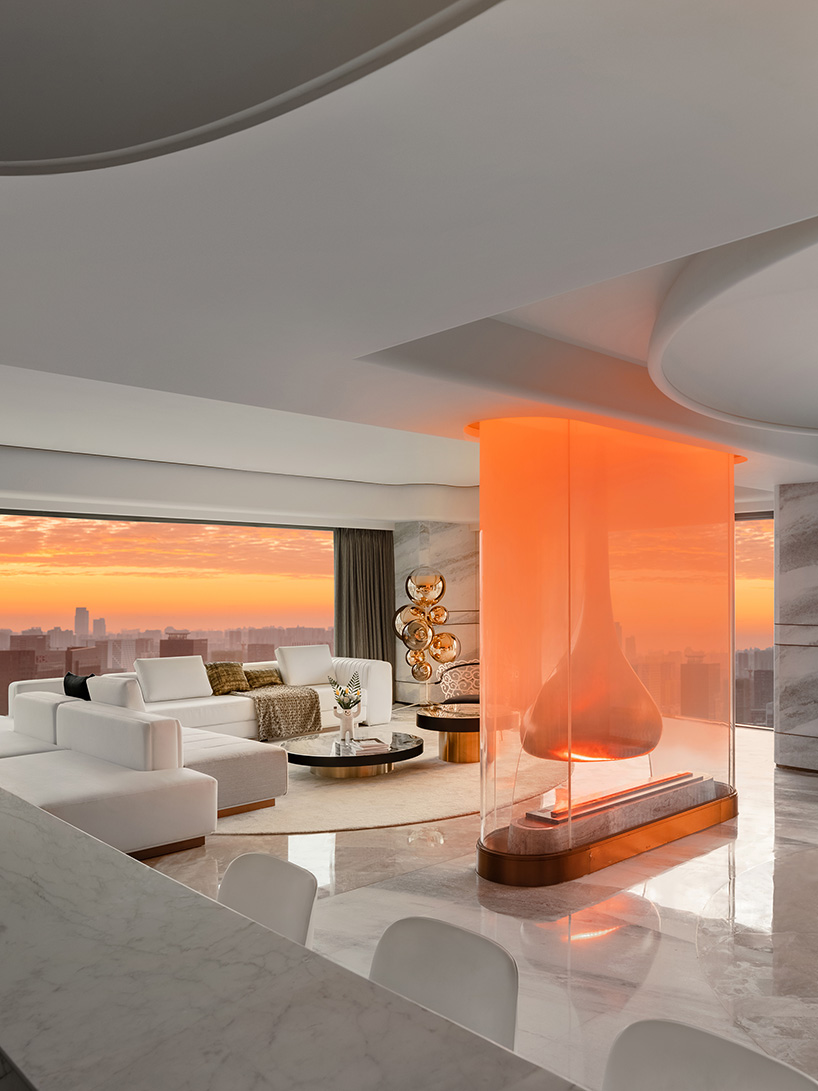 an electric fireplace subtely divides the living and dining space 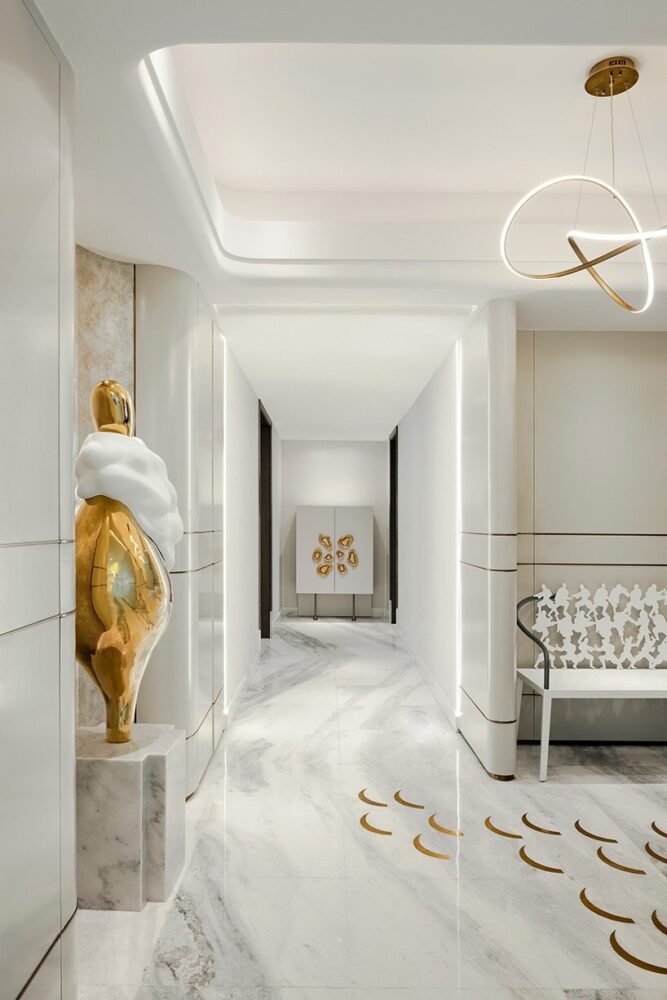 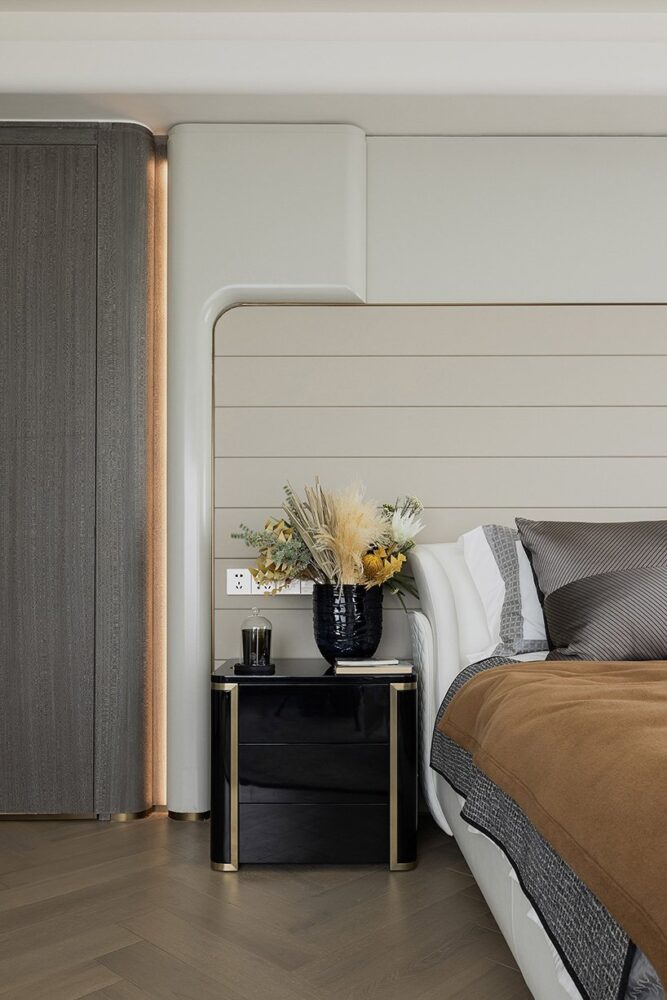 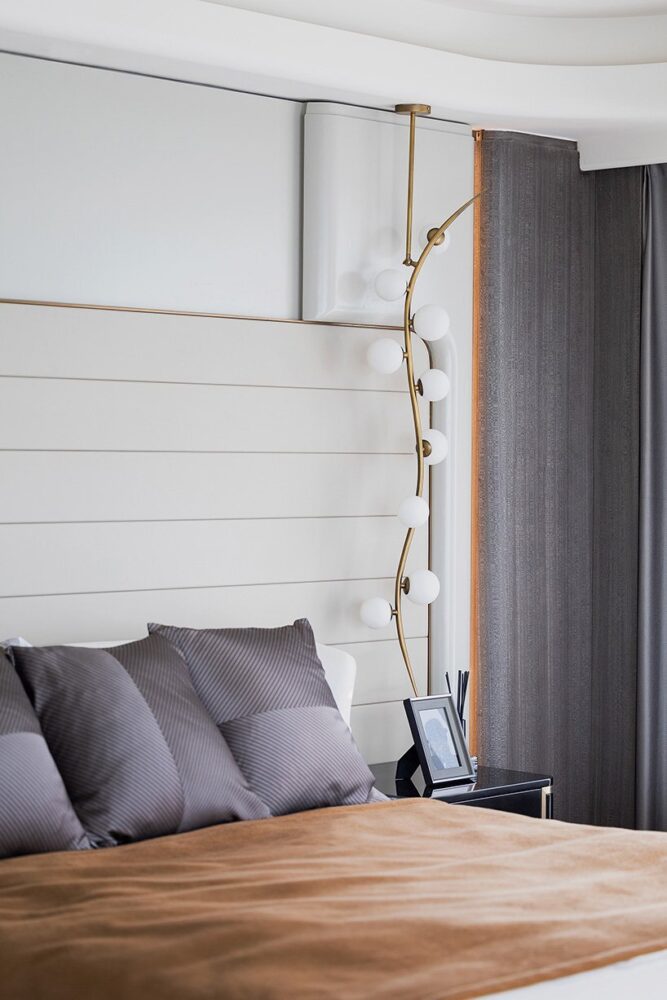 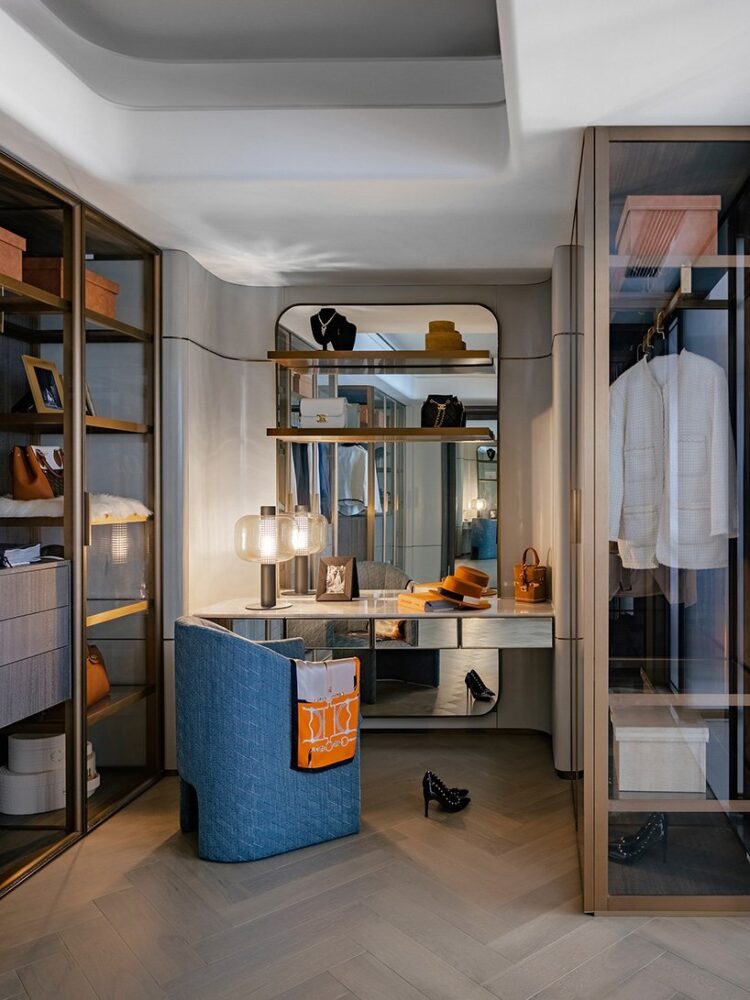 name: the penthouse of the OPUS ONE