housing is scarce — that much has become evident in the last few years. as real estate prices in big cities continue to skyrocket, conventional ideas of housing development prove unable to meet demands. the reaction to these challenges has been a silent revolution in contemporary architecture — towards collective building and living. called ‘together! the new architecture of the collective’, the vitra design museum presents an exhibition that uses models, films, and walk-in displays to showcase this global phenomenon by presenting an array of existing projects from europe, asia, and the united states. 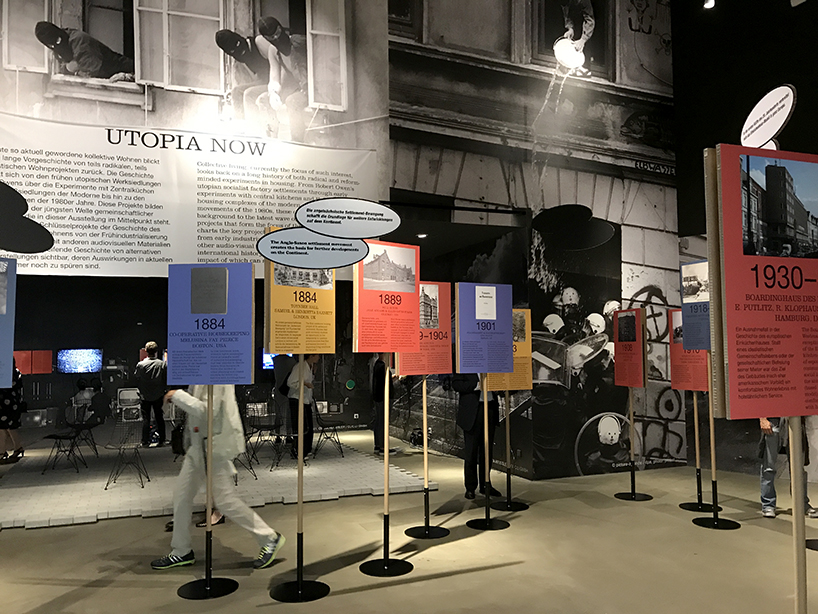 ‘together! the new architecture of the collective’ is open until september 10th, 2017 at the VITRA design museum

‘buildings are usually places for more than one person, necessarily entailing the idea of living together with other people,’ says andreas ruby, one of the curators of the exhibition. ‘the question is how is a building structured to allow different kinds of communality. the apartments that we live in are apartments for either families or single people. the housing market is made up of a certain variety of typologies and usually they cater to specific social configuration in which people live. more and more, people start to live in different configurations than the classic standard family model. many people who are single have realized that they are tired of being alone and would like to live with other people and it may not be the situation where they want to start a family themselves. so in order to get this kind of quantum of sociability that you need in order to not get bored or lonely, people are starting to live with other people with whom they’re not related, as kind of a small community.’ 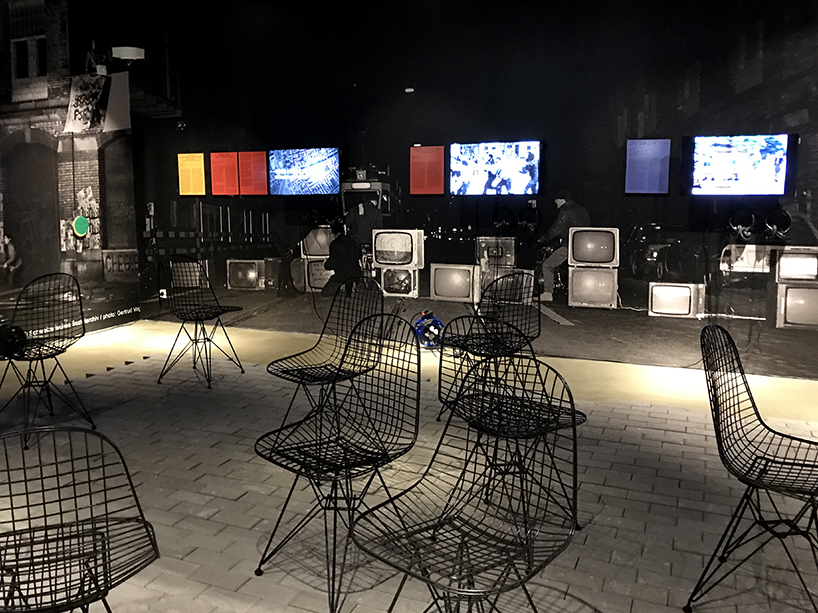 the ‘together! the new architecture of the collective’ exhibition at the vitra design museum begins with a look at the history of social housing ideals that mostly originated in a protest against the existing conditions. images and videos provide information about historical attempts to respond to these challenges. these include the phalanstères invented by charles fourier (1772-1837), the late-nineteenth-century monte verità colony in the swiss part of the ticino, the housing cooperatives of the 1920’s, the autonomous community of christiania in copenhagen, and the karthago cooperative in zurich. back then, and even today, collective living offers an affordable remedy to urban isolation. 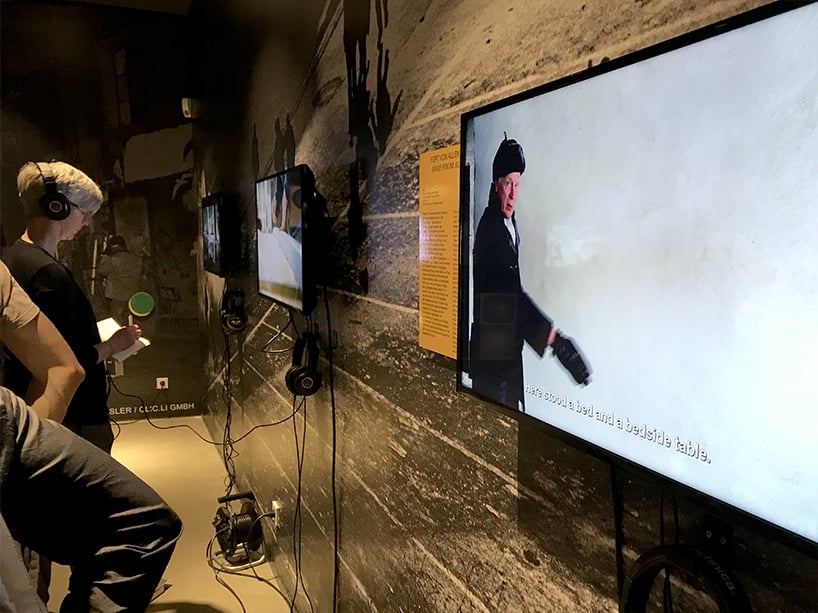 the exhibition continues with a 21 large-scale / 1:24 models of contemporary housing experiments that create a fictitious city for visitors to explore, showcasing how it would be if composed of these projects. actually located in cities as diverse as berlin, zurich, los angeles, tokyo, and vienna, a closer look to the models reveals that the innovative thrust of this new collective architecture also extends to fundamental principles such as volume, façade, and materials. the context of the imaginary city moreover shows that many of these projects blur the boundaries between living space and urban space, between private and public sphere. 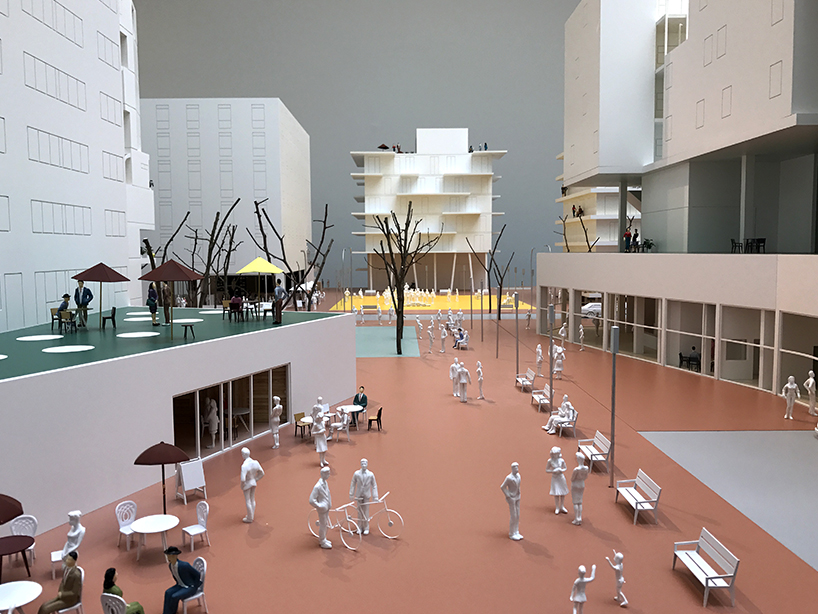 21 models in 1:24 scale of contemporary housing experiments fill the second stage of the exhibition

‘in a way you have to imagine that a situation like this — the new collective housing communities — is in a way recreating a situation that we know from multigenerational households, where three generations would live under one roof. this is a thing that we’ve lost that in the end has lots of advantages. if you are a parent and have a small child, you don’t have a lot of time to take care of your child, and then you are really grateful if your parents are near, like in traditional households. that kind of larger families we’ve lost, and that’s why we need babysitters today. you end up with single parents with one or two kinds, with even a harder task. these kind of people appreciate these situations where they can team up again in a kind of family atmosphere, just with the difference that you are not biologically related.’ 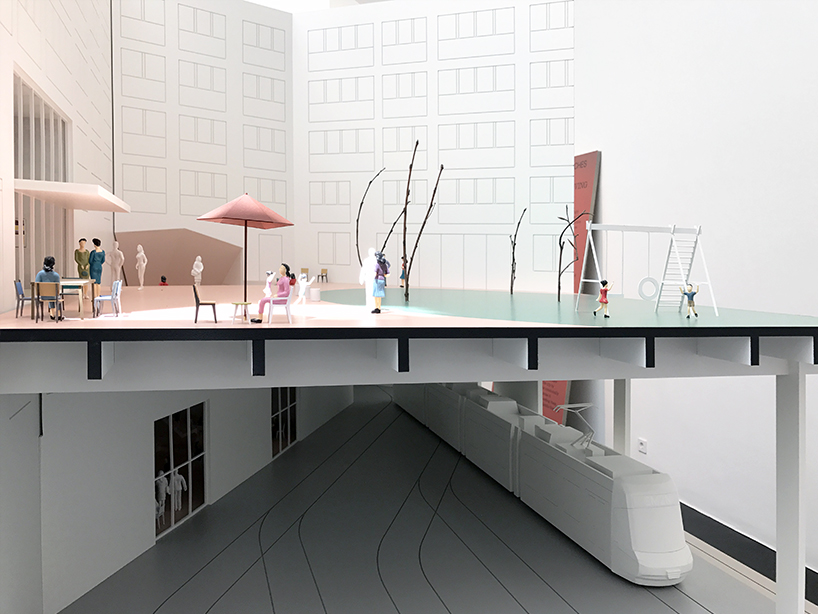 the models have been arranged all together, resulting in a fictitious city

this becomes clear in the third section, where a full-scale model of what is known as a cluster apartment, enables visitors to enter and experience the communal and private spaces that characterize this housing type. background information — including floor plans — sheds light on the many forms that new collective lifestyles can take. the installation features a series of photographs by daniel burchard made for the exhibition, proving an inside look at eight projects from a variety of nine countries, documenting scenes from everyday life in the new collectives. 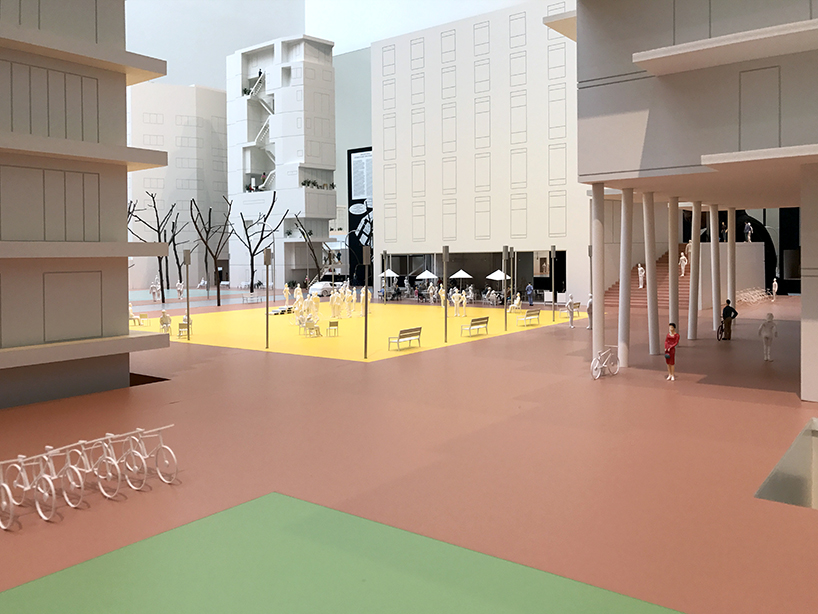 ‘as for disadvantages, let’s say that if you are interested in owning an apartment and using it as an speculative asset, this is harder to do with these projects because many of them are based on cooperative principles, meaning that you don’t own the apartment and the cooperative owns the whole thing. what you do is that you become a member of the cooperative, and to live there you have to pay a certain amount of money to become a member, but when you move out you get this money back with inflation correction. most people in these projects say that for them a flat is not a means for them to make money, but one to give a different meaning to their life. they want it for a certain type of lifestyle and for a cultural togetherness. they don’t want to come home in the evening to put a deep-fried pizza in the microwave and eat it alone, they want to come home and go to the restaurant of the project, where there is a cook who is payed by the community and meet other members and have a social exchange.’ 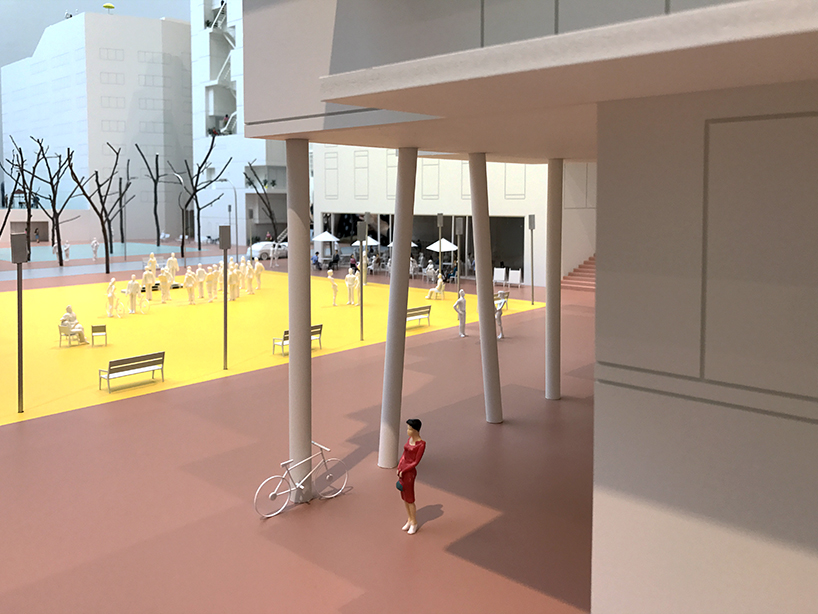 the imaginary city shows how private and public space are blended

the last stage of the show is composed of a coworking space with five desk, each one showcasing a case study. questions regarding the economical part of the projects are answered, highlighting the new funding options arising from the close integration of public and private functions. for example, at the kalkbreite in zurich, approximately half the floor area is reserved for commercial and non-residential uses including a cinema, a packaging-free supermarket, three restaurants and cafés, health consultancies, various offices, and a publicly accessible courtyard with a playground. 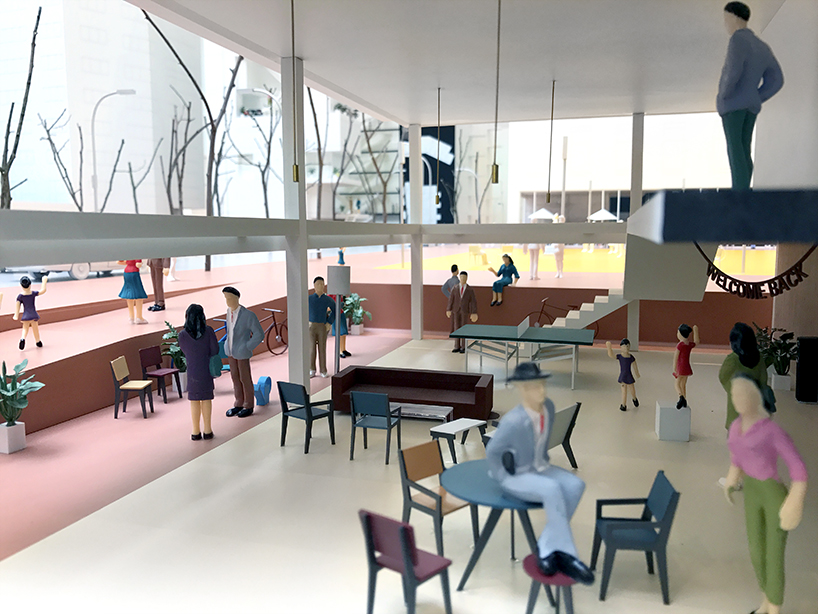 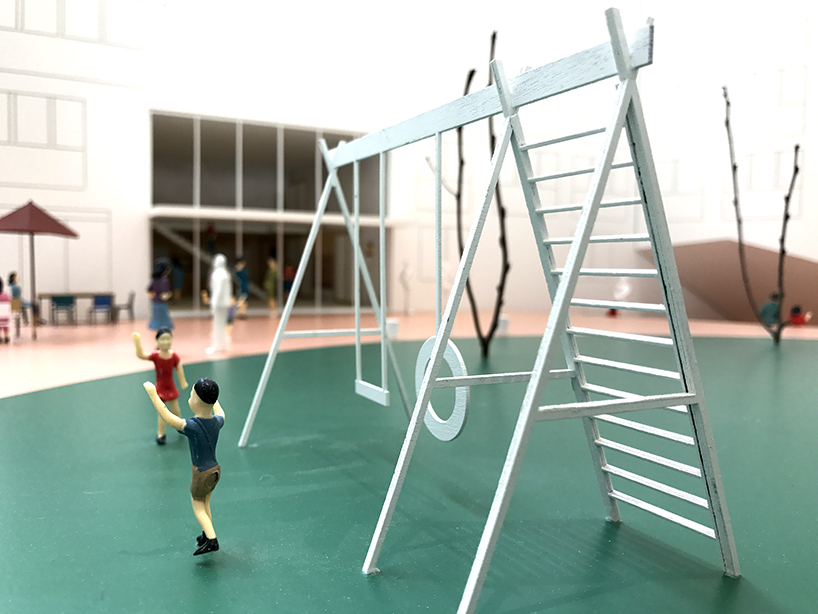 the projects are located in cities as diverse as berlin, zurich, los angeles, tokyo, and vienna

the exhibition manifests how these communal living ideas are changing the way in which inhabitants and architects together conceive new forms of living, which beyond meeting individual needs, provide an answer to a central question of our time: how do we want to live together in the future? 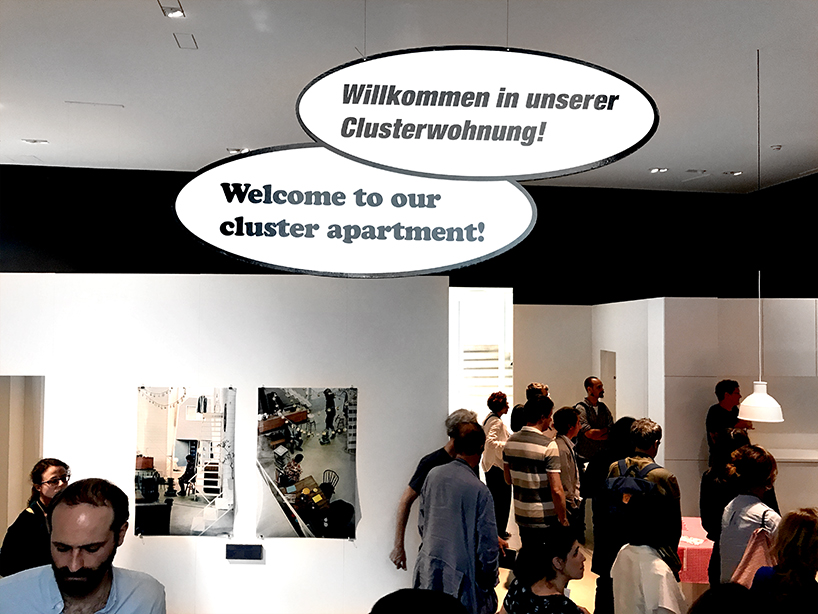 a 1:1 cluster apartment has been built, portraying communal living 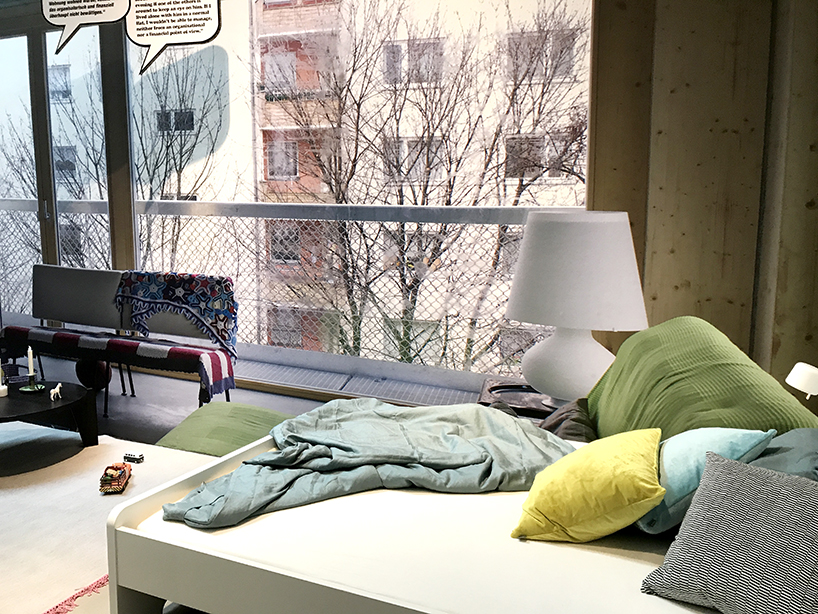 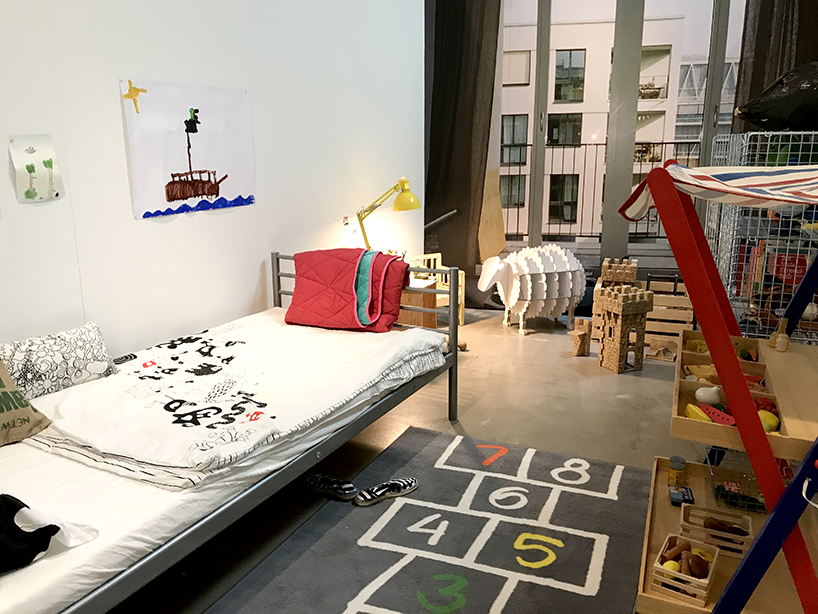 each apartment has its own rooms, bathroom and kitchenette 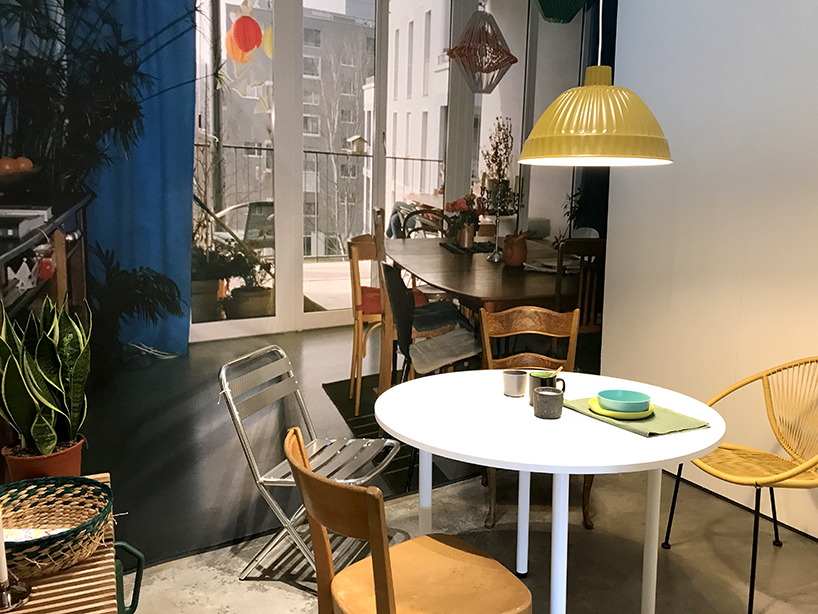 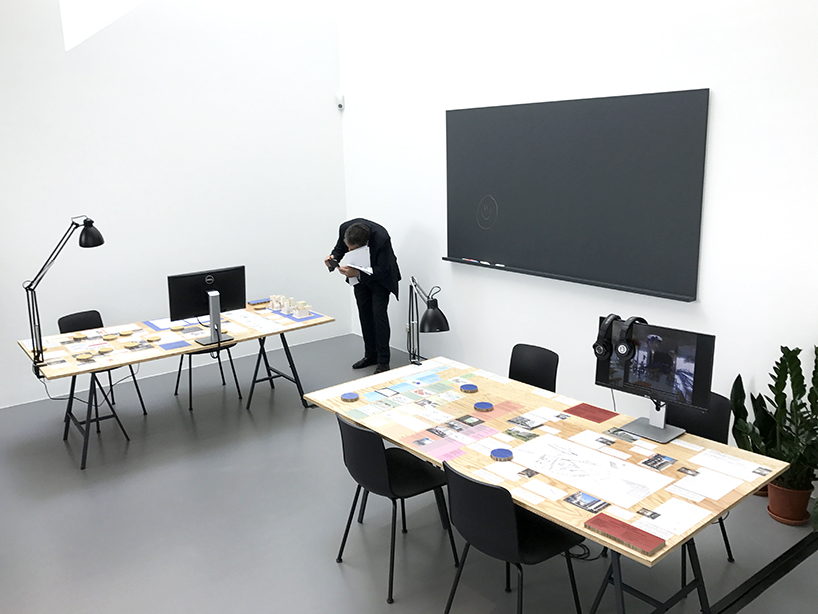 the last stage of the show is composed of a coworking space with five desk, each one showcasing a case study 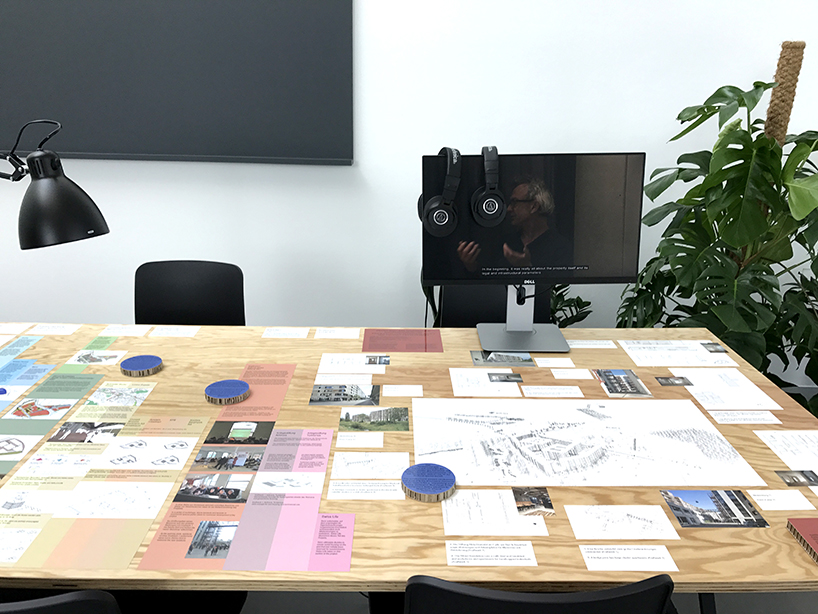 questions regarding the economical part of the projects are answered 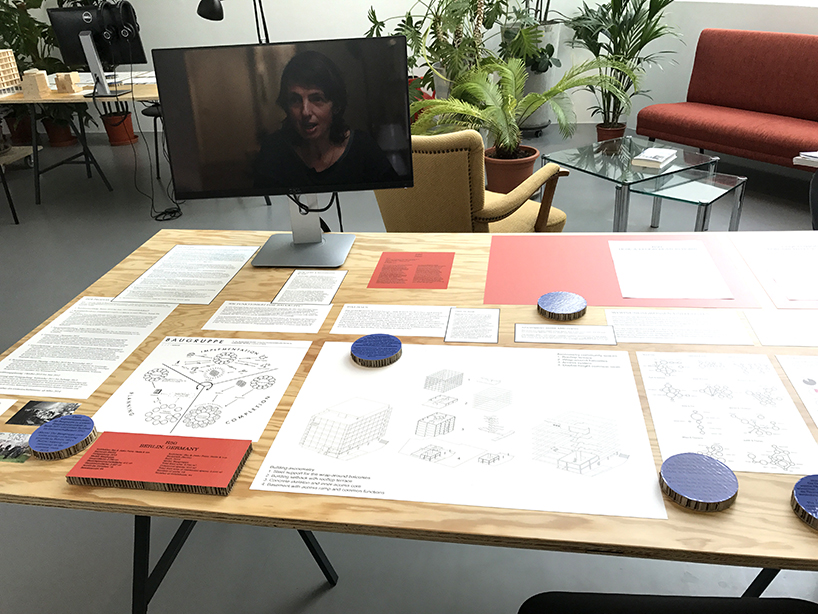 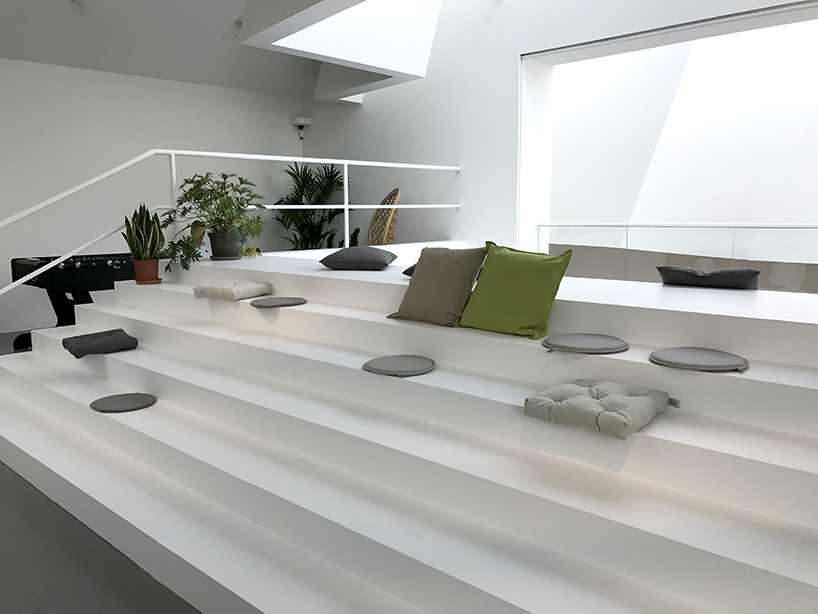