on may 22nd, 2012, the world’s second tallest tower is set to open in the eastern capital of japan. the self-supporting ‘tokyo skytree‘ stands at a height of 634-meters (2,080 feet), surpassed only by the 828-meter burj khalifa in dubai, UAE and beating out the 553-meter CN tower in toronto, canada and the 600-meter canton tower in guangzhou, china, thus making it the world’s tallest free-standing broadcasting structure.

designed by tokyo-based practice nikken sekkei and constructed by an organization led by the tobu railway group, the ‘skytree’ is built over reclaimed land and its major role will be the transmission of digital terrestrial broadcasting. this has already been in use since 2003 in the kanto area, however, due to the many skyscrapers rising over the 200-meter high mark in tokyo, it became necessary that a new high-rise be constructed that vertically measured more than 600 meters for this purpose. steel trusses form the exterior framework wrapping around a core concrete pillar that has cost more than 815 million USD (65 billion JPY) to build.

one of the big questions is how the building will survive the earthquakes which are typical in the region. because of its composition, ‘when an earthquake hits, the central concrete pillar and the outer structure of steel pipes sway in opposite directions because of the difference in weights. that means they can offset up to 50 per cent of the energy that falls on the tower,‘ says spokesman sho toyoshima. its positioning over the intersection of four tectonic plates, gives the ‘skytree’ a 50 percent chance of suffering anything exceeding a magnitude of 7.0 over the course of the next four years. 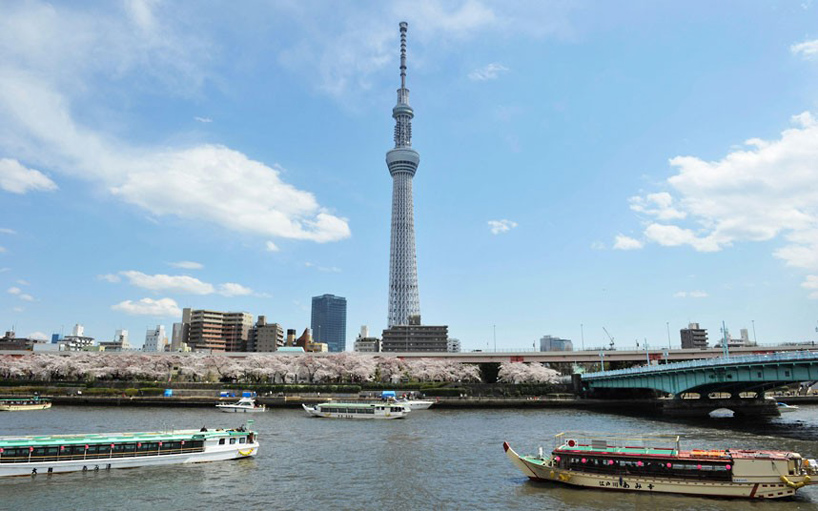 designed in the color ‘skytree white’, the tower stands in harmony with the surrounding scenery. this choice is based on ‘aijiro’, the lightest shade of traditional japanese indigo blue. the tone of the ‘skytree’ replicates the technique of indigo dyers, emitting a delicate pale azure glow, much like that of white celadon ware. it stands to represent the legacy of traditional japanese craftsmanship in a modern form, a true fusion of both the established culture and modern technology.

the ‘tokyo skytree’ will provide various commercial attractions including an aquarium, planetarium, shopping and dining experiences. its’tembo deck’ which is situated at the 350 metre mark, is covered in 5 metre-thick glass, and offers a 360-degree panoramic view of the bustling city below, allowing visitors to look-out up to 70 kilometres in distance. at 450 metres, the ‘tembo galleria’ will make you feel as if you are walking in the sky through a glass tube.

the approximate ticket price to enter is about 31USD (2500 JPY) to reach the tembo. via a high-speed elevator, it takes about 50 seconds to reach the lower observation deck, while there is an emergency staircase that has 2, 523 steps. 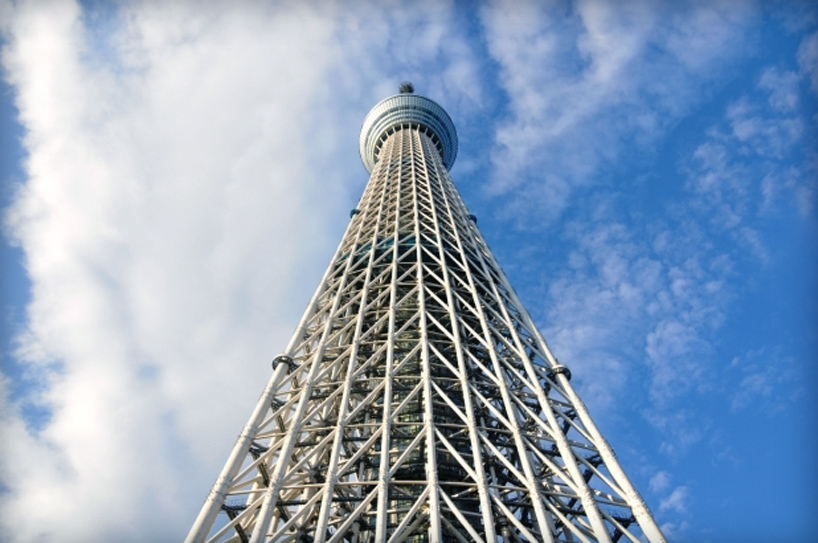 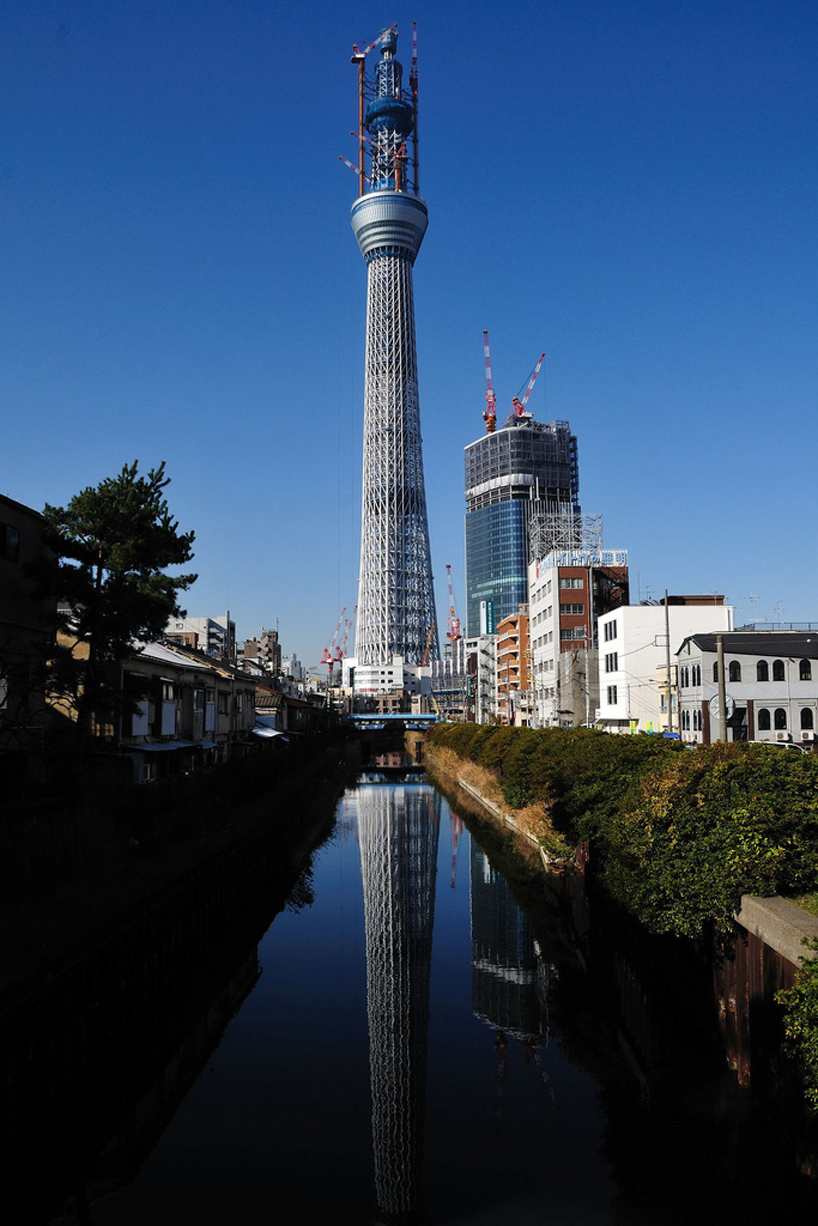 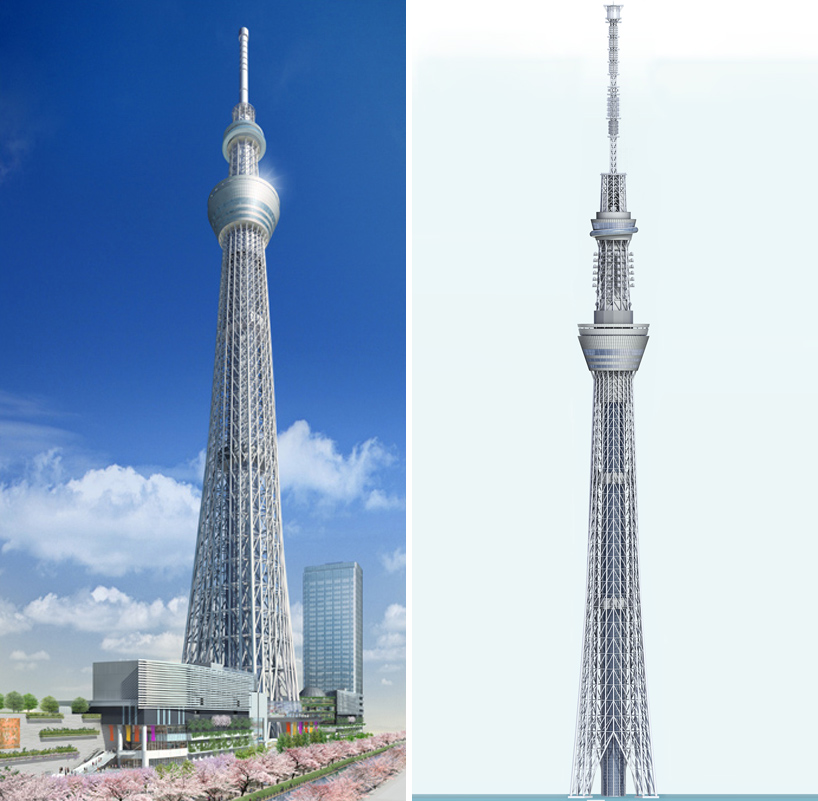 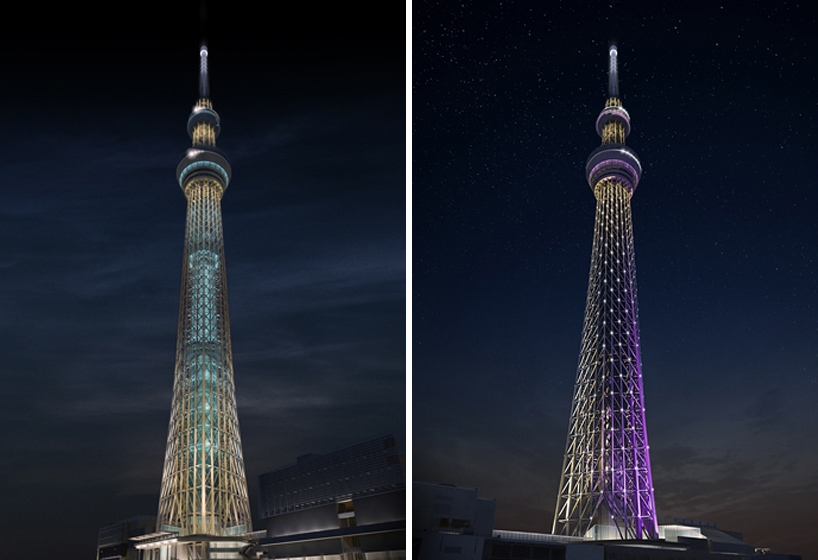 the lighting design of the tokyo skytree twoer left: ‘iki’, the essence of kokoroiki right: ‘miyabi’, the aesthetics images courtesy of tokyo skytree

two lighting styles, ‘iki’ and ‘miyami’ operate alternately, illuminating the ‘skytree’ by night. ‘iki’  is the essence of ‘kokoroiki’, the down-to-earth spirit of edo commoners, represented by a pale blue light, with the motif of the sumida river running down the center pillar. ‘miyabi’ offers an aesthetic sense which highlights the intricate steel structure of the form. the color theme is edo purple, with a well-balanced sprinkle of gold foil-like lights. 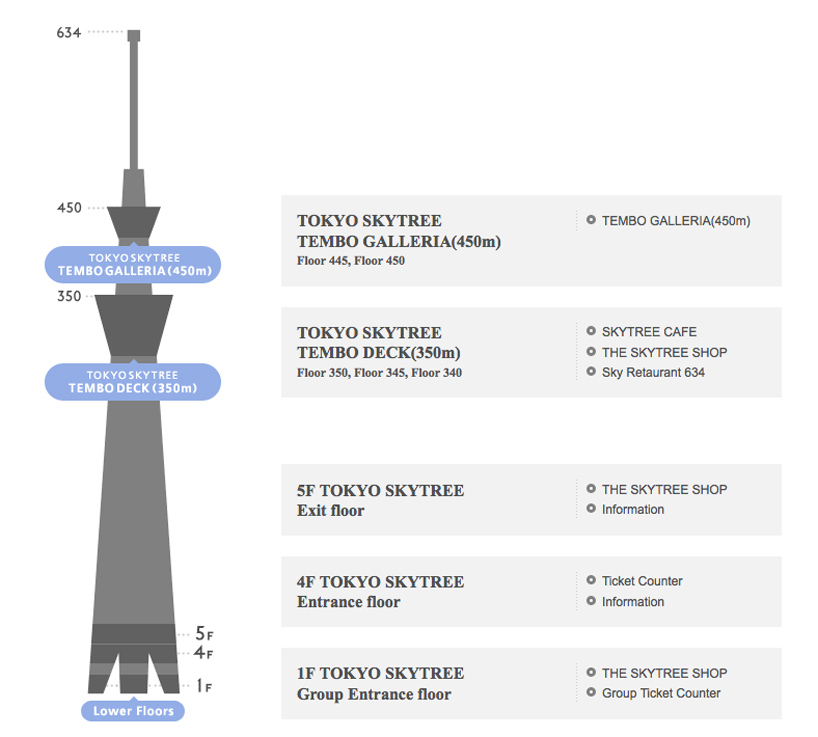 floor guide to the ‘tokyo skytree’