2016 has seen the unveiling, and ongoing construction, of many expressive and forward-thinking cultural centers. each distinctive in its own right, the vast buildings juggle between accommodating multiple programs, that include leisure, commercial and performance, in order to provide an all-inclusive hub and welcoming destination for the public. many big names in the field of architecture make up this year’s list, some more than once, all displaying technological excellence and bold design to provide a plethora of new landmarks. from tbilisi to miami beach, see our round up of the most eye-catching cultural buildings revealed in the past 12 months. 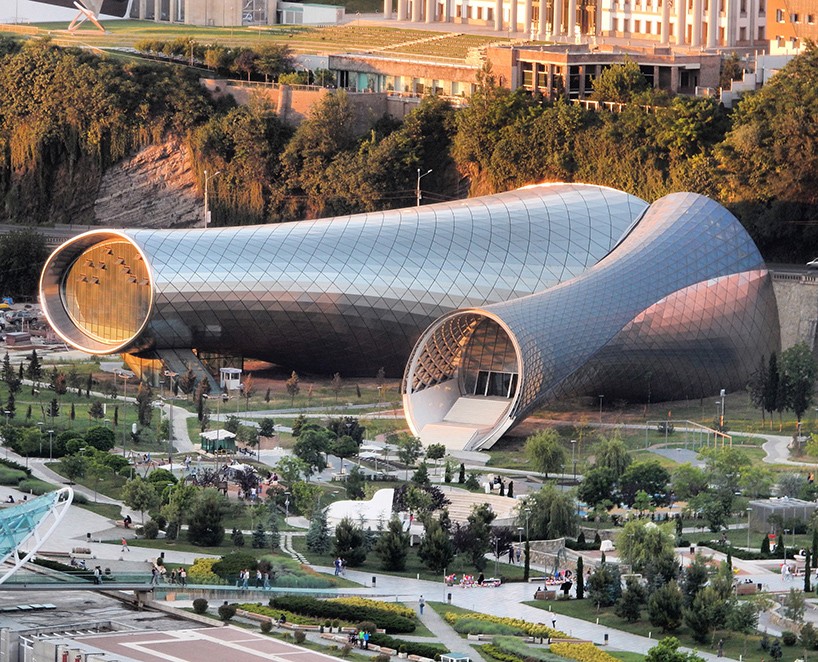 completed by italian architecture studio fuksas, this tubular structure belongs to the music theater and exhibition hall in tbilisi’s rhike park, georgia. the distinctive funneled form was conceived as ‘a periscope to the city’, framing views of the river. inside, the two volumes house a musical theater and an exhibition hall. 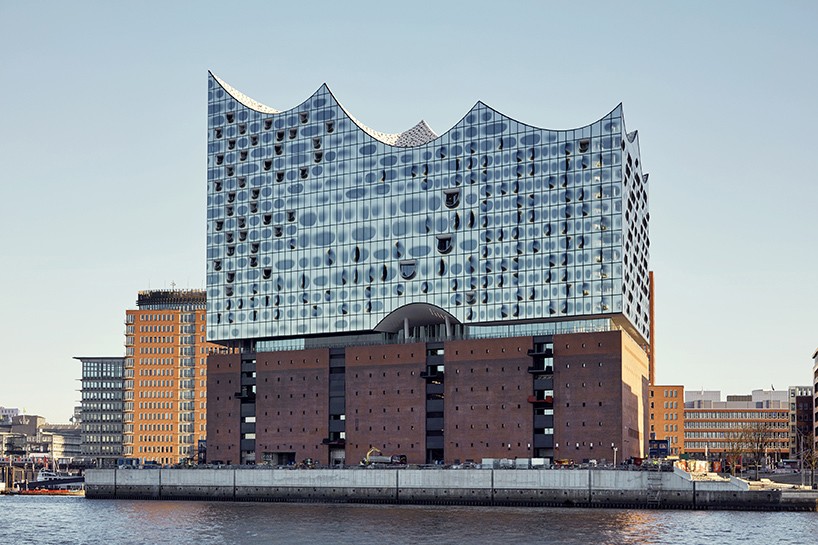 glimmering at the edge of hamburg’s hafencity quarter is herzog & de meuron’s elbphilharmonie concert hall. the bold addition sits atop a previously existing warehouse building, with the glazed façade comprising 1,100 individual mirrored planes. as well as producing a shimmering effect on the exterior, the glass panes have been separately shaped with millimeter precision and marked with small basalt grey reflective dots to prevent overheating. the scheme is scheduled to fully open at the beginning of next year, housing three concert halls, a hotel, and 45 private apartments. 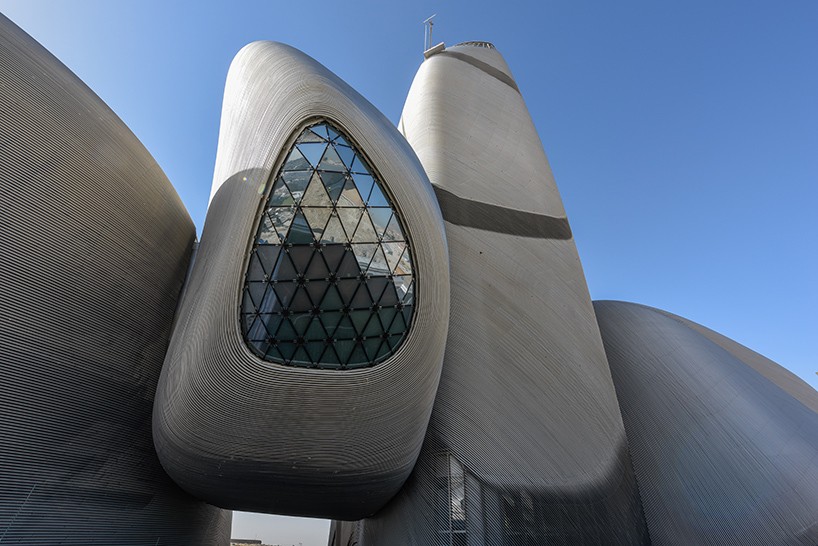 the ambitious king abdulaziz center for world culture in dhahran, saudi arabia, is a 100,000 square meter development accommodating an auditorium, cinema, library, exhibition hall, museum, and archive. designed by snøhetta, the cultural facility’s form draw from saudi arabian geology and its distinctive rock formations that preserve petroleum energy. the library will contain 200,000 books and the 930-seat auditorium will host opera and symphony performances. at the center of the design is a monolithic tower that soars above the complex. this landmark edifice flanks a series of smaller, pebble-like forms, which are similarly clad in an arrangement of stainless steel tubes. the ‘king abdulaziz center for world culture’ is expected to complete in spring 2017. 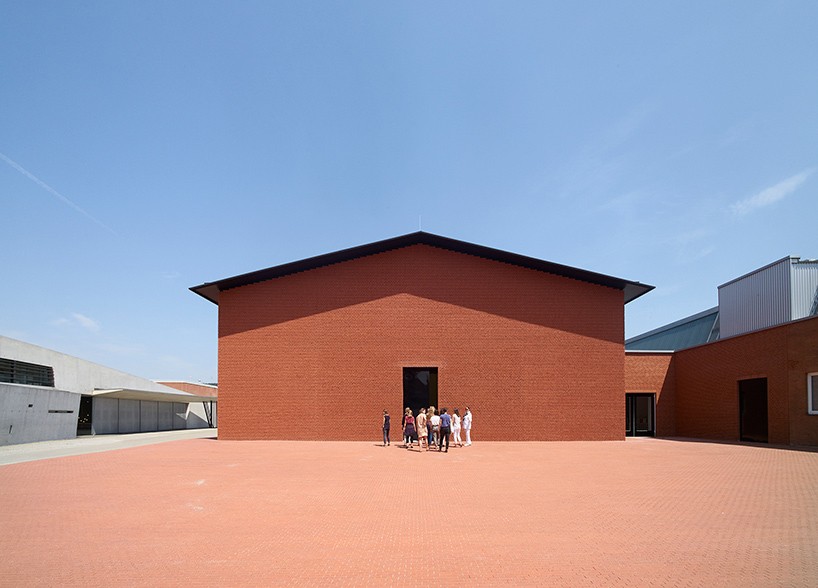 the newest architectural addition to the vitra campus in weil am rhein is the schaudepot exhibition space by herzog & de meuron. despite its simple house-shaped form and windowless façade, the building is highly detailed and is constructed from hand-broken bricks. this material expression and dignified appearance reflects the cultural worth of the historic and rare pieces of furniture that is on display within its permanent exhibition.

‘we have been able to contribute two buildings. first the vitrahaus, iconic and visible from afar, which opened in 2010, and now the schaudepot, which bears practically no traces of its makers. it was in fact originally planned as an underground warehouse, without any form of architectural expression’ – jacques herzog and pierre de meuron, founding partners of herzog & de meuron 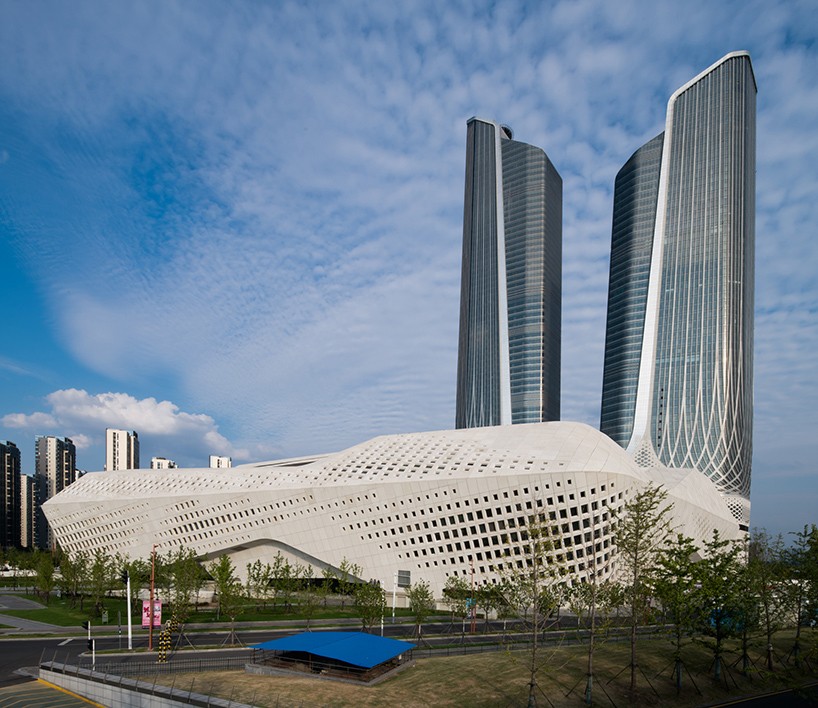 standing proudly on its 5.2 hectare of land in china’s eastern jiangsu province, is zaha hadid architect’s entry. the nanjing international youth culture centre boasts two large skyscrapers, with a design that intends to serve as a transition from the verticality of the city’s central business district to the horizontal topography of the adjacent river. the façade features a grid of rhomboid fiber-concrete panels, while the two towers extend from a five storey podium which contains a hotel, a conference center, office and administrative areas, and basement parking. 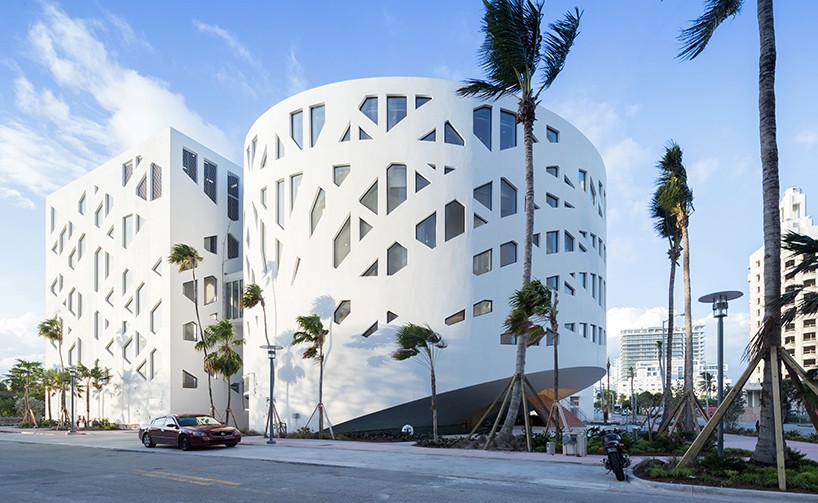 the faena forum has established itself within a new cultural district in miami beach, its functions dedicated to the development of cultural programming in the region. the OMA-designed construction is one of three designed by the firm in the same neighborhood. the building comprises two similarly sized volumes, a cylinder and a cube that can be combined or subdivided to support potential productions. meanwhile the façade of 350 windows allows for vast column-free spaces internally on the building’s two main levels.

read our interview with OMA partner shohei shigematsu where we took a private tour of the district here. 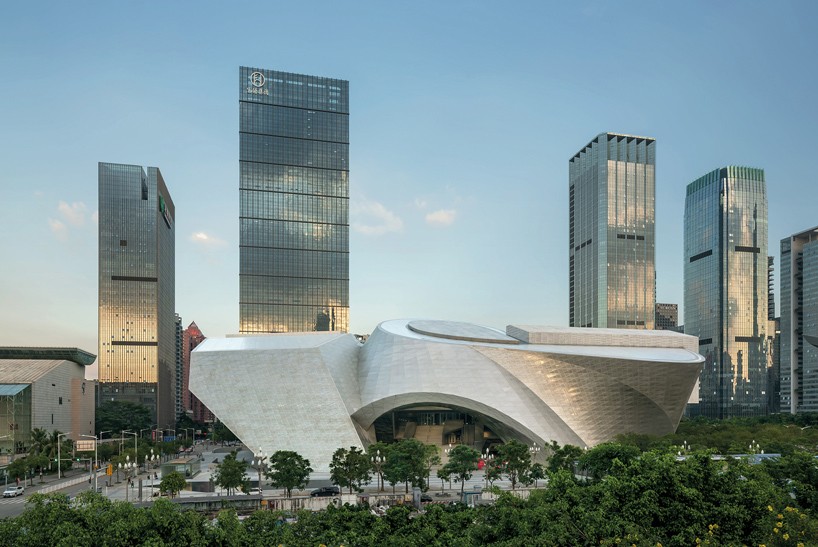 in china, coop himmelb(l)au completed MOCAPE, shenzhen’s museum of contemporary art and planning exhibition. the building combines two independent institutions — the museum of contemporary art (MOCA) and the planning exhibition (PE) — as a cultural meeting point and a venue for architectural exhibitions. the two museums are created as separate entities to emphasize their functional and artistic requirements and as a result, the scheme features a monolithic body surrounded by a multifunctional, transparent façade that allows views deep into the shared entrance 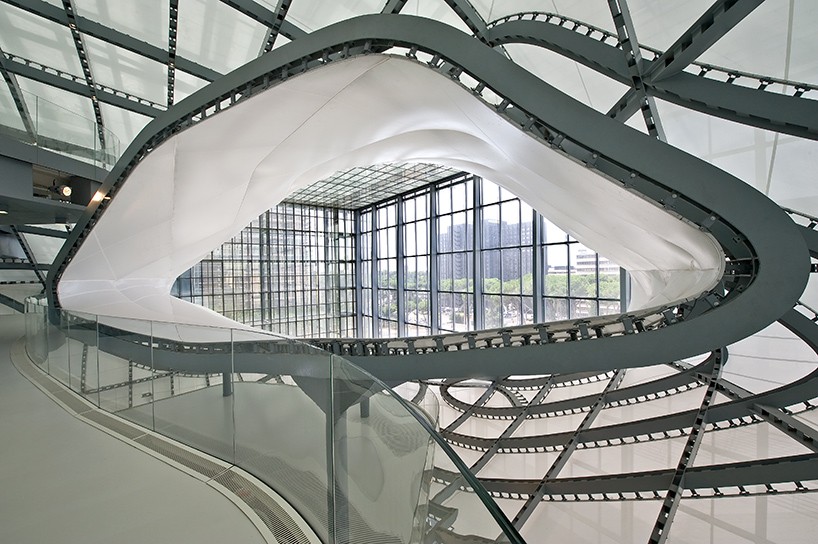 nicknamed ‘the cloud’, the new rome-EUR convention center and hotel in rome forms the city’s largest building in more than half a century. fuksas’ response follows the simple orthogonal lines of the district’s 1930s rationalist architecture. the scheme spreads across 18,000 square metres, housing auditoriums, exhibition spaces, and a hotel. it will also include seven boutique suites, a spa, and a restaurant in the hope of generating between €300-400 million each year. 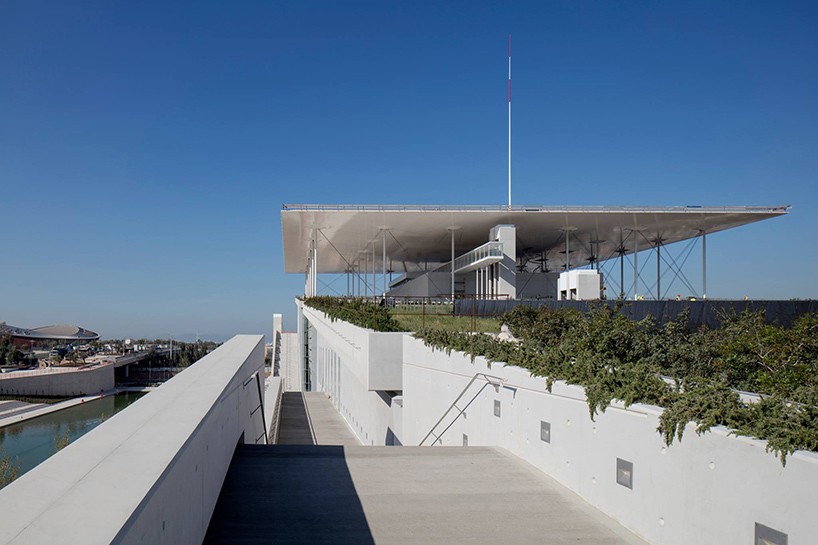 in greece, four kilometers south of central athens, renzo piano completed a major public complex set within a 170,000 square meter park. the scheme comprises the national library of greece as well as the country’s opera house. the site was previously a parking lot, which was left abandoned after the city hosted the olympic games in 2004. the large roof is topped with 10,000 square meters of photovoltaic cells, providing shade from the region’s hot sun. 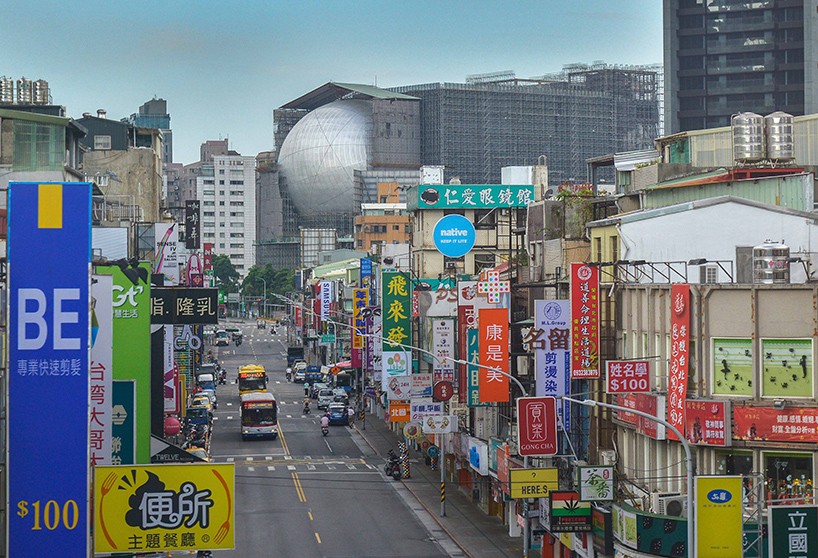 a sphere-shaped proscenium playhouse peers out of the OMA-designed performing arts center in taipei, taiwan. the international firm won the commission back in 2009, and new images revealed the scaffolding coming down to unveil the aluminum exteriors and the 800–seat multiform theatre. when complete, a total of three venues will be connected through a transparent central cube which will include a 1,500 seat grand theater. lifted off the ground, the design enables the street to extend under the building, creating a shared plaza for public activities.