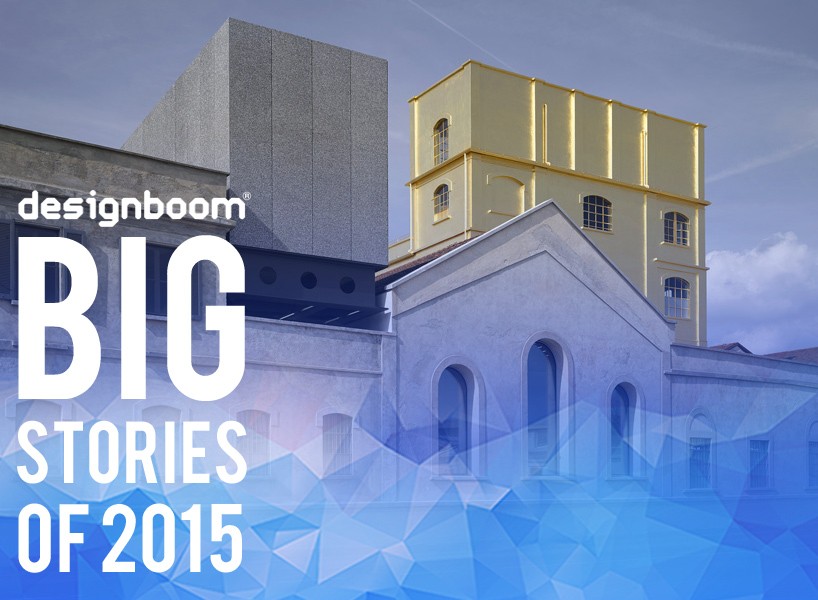 there is no doubt that 2015 has been a bumper year for museum buildings. across the globe, a host of recently completed schemes facilitate the human desire to congregate, offering areas designed for the exchange and dissemination of knowledge, inspiration, and creativity. from beirut to moscow, big names in the field of architecture were charged with the task of establishing new cultural landmarks to attract local, national, and international audiences. as we move into december, designboom kicks off its annual round up of the year’s most talked about projects with a look at ten museums that opened their doors in 2015. 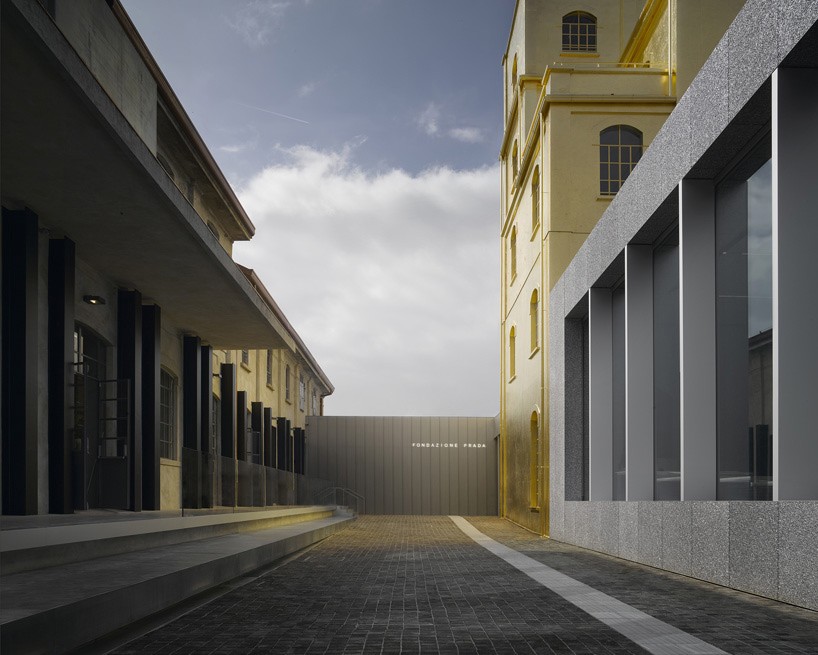 
in may, milan’s fondazione prada opened to the public. designed by OMA, the 19,000 square meter campus comprises seven existing buildings and three new ones — museum: a space for temporary exhibitions; cinema: a transformable multimedia auditorium; and torre, a ten-storey gallery tower for displaying the foundation’s permanent collections, (set to open at a later date).

‘the fondazione is not a preservation project and not a new architecture’, said rem koolhaas on the project’s opening. ‘two conditions that are usually kept separate here confront each other in a state of permanent interaction — offering an ensemble of fragments that will not congeal into a single image, or allow any part to dominate the others.’

the broad by diller scofidio + renfro 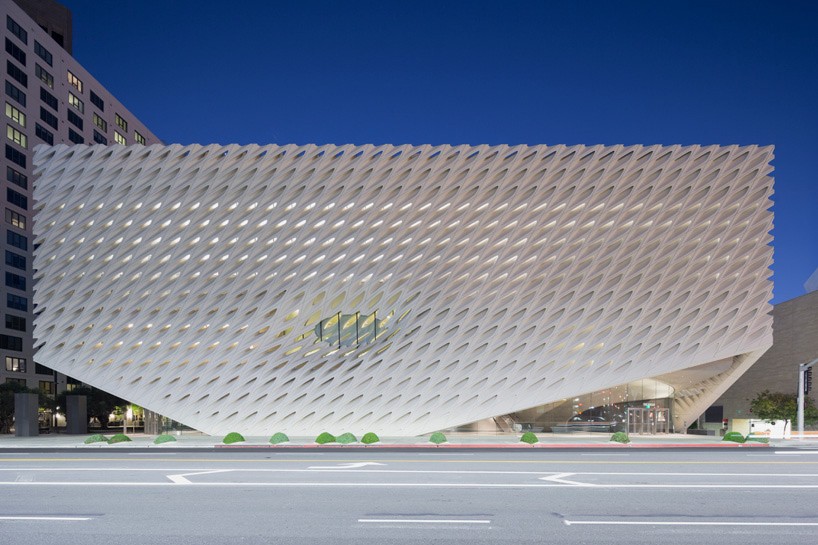 occupying a prominent plot on grand avenue in downtown los angeles, the broad contemporary art museum welcomed visitors for the first time in september. designed by diller scofidio + renfro in collaboration with gensler, the cultural institution’s architecture is defined by a ‘vault-and-veil’ concept whereby the overall design merges storage and display programs.

‘the circulation is very much part of the concept, you come from the street then you shoot through to the large gallery explains liz diller of DS+R. ‘after you’ve had your experience in the gallery on your way down, it takes you into various views of the archive, the live storage. this is very important to us that the public understand that this is basically a collector and that the work is constantly unpacked on top of this suitcase, and repacked.’ 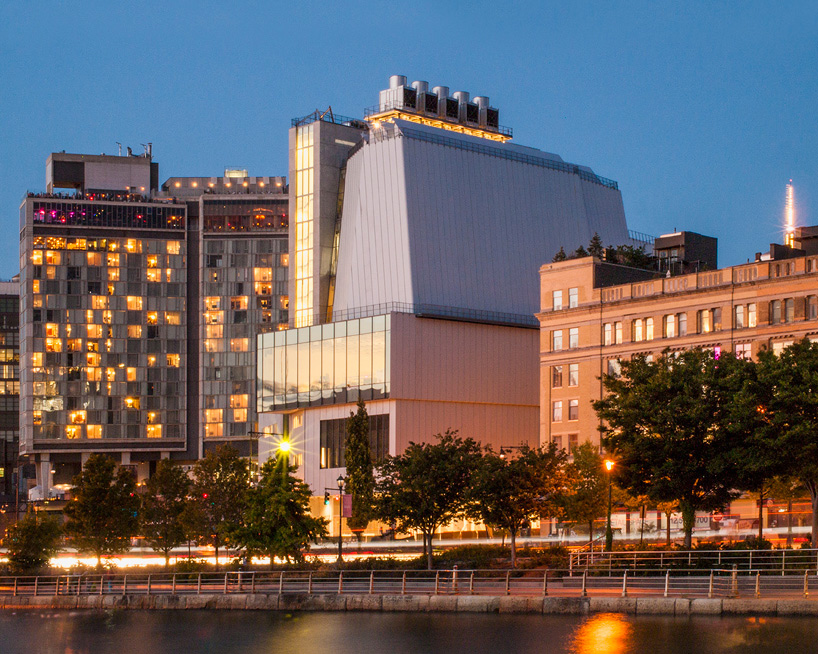 designed by italian architect renzo piano – in collaboration with cooper robertson – the new building for the whitney museum of american art opened its doors in new york. positioned between the high line and the hudson river, the much-anticipated project contains a series of indoor and outdoor galleries that double the institution’s floor space in comparison to its former home.

‘the design of this building emerged from many years of conversations with the whitney, which took us back to the museum’s origins,’ commented renzo piano. ‘we spoke about the roots of the whitney in downtown new york, and about this opportunity to enjoy the open space by the hudson river. museum experience is about art, and it also about being connected to this downtown community and to this absolutely extraordinary physical setting.’ 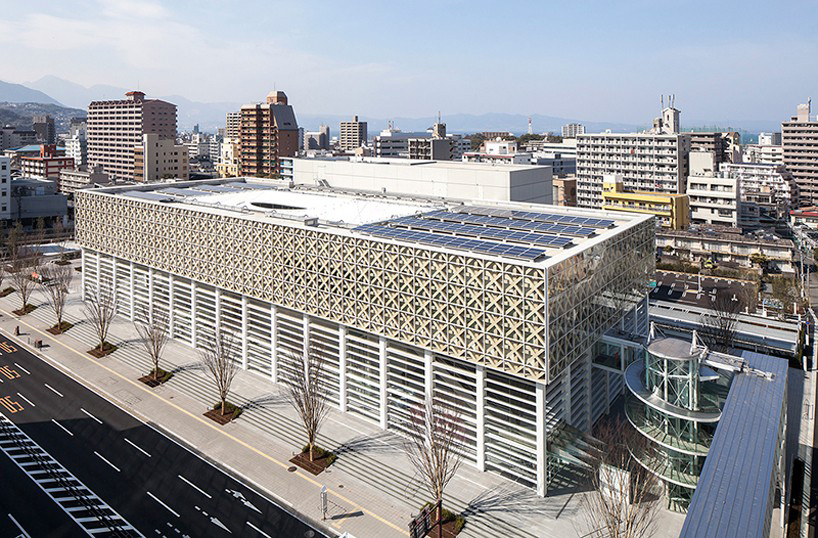 described as a museum of the five senses and encounters, shigeru ban’s oita prefectural art museum officially opened this year. combining double height spaces and large glass screens, the 80m long cubic structure has been wrapped with a woven timber façade, reminiscent of the area’s traditional bamboo crafts. acting as a cultural heart of the prefecture, the scheme encourages social and public activity where the expansive foyer acts as a gallery in itself, as well as an open public space that includes a café. 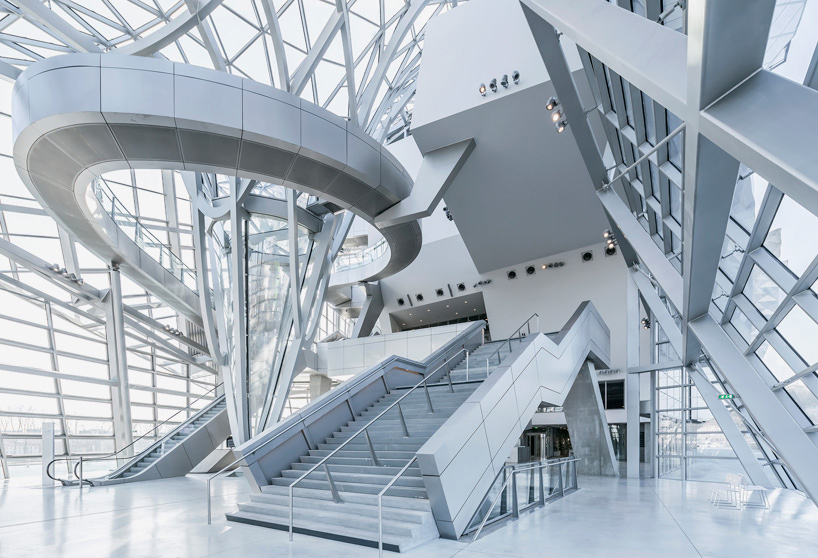 four years after construction began, coop himmelb(l)au’s musée des confluences is now complete, standing as the centerpiece of lyon’s ongoing regeneration project. located at the junction of two of the region’s main rivers, the themes of contrast and divergence are further characterized in the museum’s architecture, fusing together separate entities to form a new dynamic structure. the vast scheme, which integrates the fields of technology, biology and ethics, serves as both a museum and an urban leisure space, forming an active and lively place of public congregation 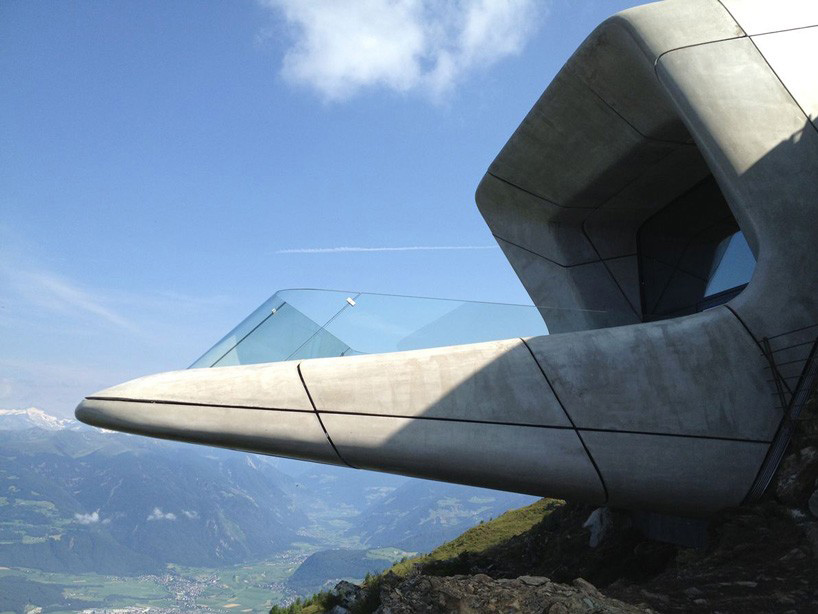 located the summit plateau of plan de corones in the italian alps, the sixth and final museum dedicated to the career of reinhold messner was completed earlier this year by zaha hadid architects. named ‘MMM corones’, the institution, which is now open to the public, explores the discipline of mountain climbing through a unique collection of photographs and various items collected by messner during his lifetime as an explorer. 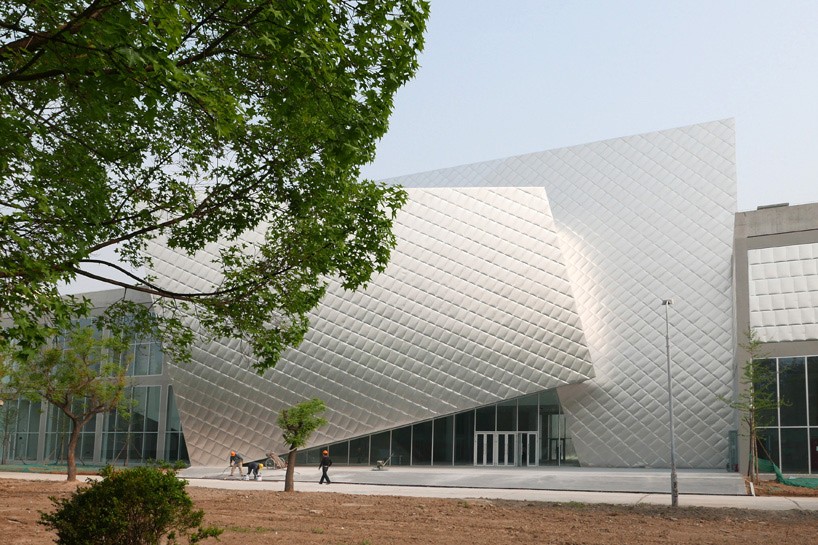 in china, the country’s largest public contemporary art space has opened inside a renovated electronics factory dating from the 1980s. designed by studio pei zhu, the minsheng contemporary art museum exists in contrast to standardized ‘white cube’ galleries, configured as a diverse series of exhibition spaces. in reusing an existing building, the design team sought to incorporate the rough industrial characteristics of the former factory with exposed textures and surfaces. 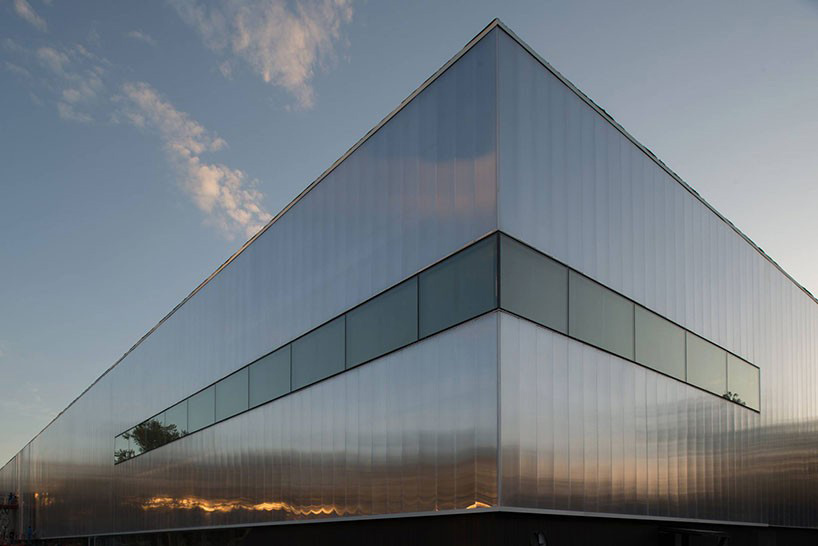 located in moscow’s gorky park, the garage museum of contemporary art hosts the gallery of russian businessperson and art collector dasha zhukova. the building, which has been designed by rem koolhaas’ international studio OMA, sees the renovation and reuse of the 1960s vremena goda pavilion, with a new program containing diverse exhibition, learning, research and event space configured to showcase the best of contemporary russian culture.

folk museum for the china academy of art by kengo kuma 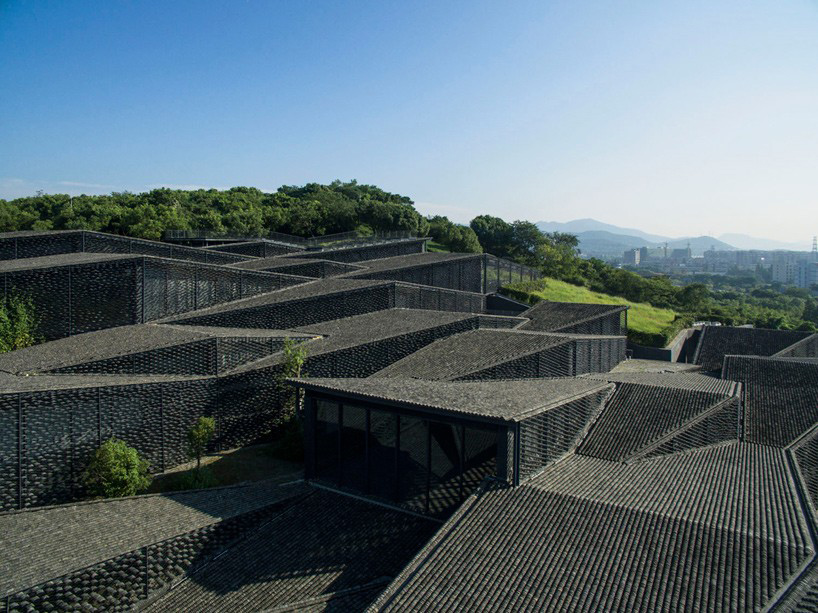 a folk art museum, designed by renowned japanese architect kengo kuma, completed in the chinese city of hangzhou. the institution, which was completed for the china academy of art, is committed to conserving, revitalizing and regenerating the country’s arts and crafts, playing a central role in the field of education. the building’s form relates to the region’s geological terrain, and seeks not to intrude on the surrounding green environment. 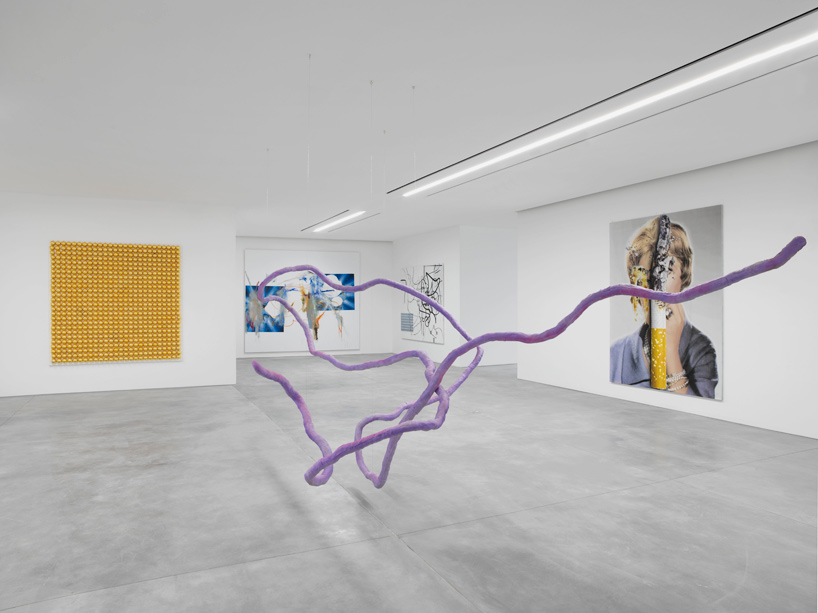 the ‘aïshti foundation’ — a mixed-use cultural center designed by renowned british architect david adjaye — was completed after three years of construction. the complex, which is located in the lebanese capital of beirut, is dedicated to presenting contemporary artwork from the private collection of tony salamé, CEO of luxury brand aïshti. alongside art galleries, the development also houses a range of retail outlets and leisure facilities.

‘having spent time in beirut as a child, it is a pleasure to return to the city to work on this project‘, said architect david adjaye. ‘I have been particularly excited to explore a new typology, by juxtaposing culture and a series of other adjacencies, from art to retail to well-being.’