2015 was a year full of architectural visions that delighted our eyes and excited our imagination. we received several thousand submissions from our readers, with designers, artists and architects from across the globe sending through a diverse range of works that we have shared with our audience over the last 12 months.

we believe that maintaining an open dialogue with creatives is extremely important, and we are happy to showcase the high level of original projects of our readership. from habitable wind turbine parks to dystopian landscapes, we highlight 10 architectural visions from our reader submissions of 2015.

high rise developments, airports, science and technology centers, universities, chain hotels, shopping malls, and museums now fill the deserts of the southern gulf region. the unprecedented financial boom of some arab states have caused the area great wealth, and with it an ever-increasing amount of cultural criticism and aversion towards examples of some of the world’s most unconsidered, pretentious architecture. to reconnect the area to the root cause of its mass-expansion, chris collaris design — along with ruben esser, sander bakker, and patrick van der gronde  — created the ‘black gold project’.

the concept involves the conversion and renovation of mega oil-tankers for land-based use. organization of interior storage volumes and tanks provide nearly infinite possibilities for adaptations and functional applications. double steel walls are able to facilitate a sustainable climate suited for either short or long visits. 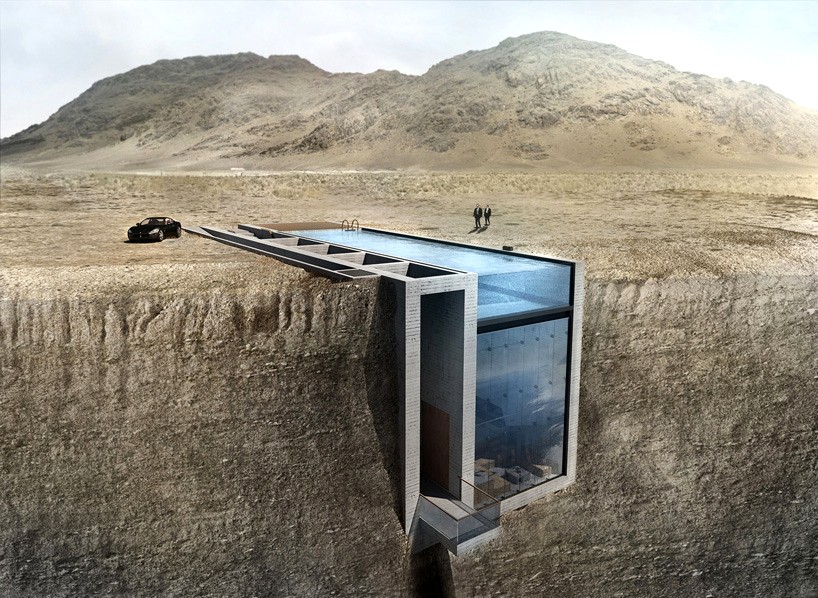 ‘casa brutale’ is an unclad statement of simplicity and harmony in contemporary architecture. the conceptual residence, by OPA (open platform for architecture), is a chameleonic living space that teeters on the high cliffs above the aegean sea. it is a study of aesthetics, structure, function and engineering, waiting hopefully to be built.

the design draws directly from adalberto libera’s italian masterpiece casa malaparte; but rather than sitting above ground, it’s encased by the tender earth surrounding. the home is constructed with simple materials like wood, glass, and raw concrete, putting the focus on the landscape and ocean. nothing extends above the ground level, and impact is limited to a single façade that separates the vertical cliff face. 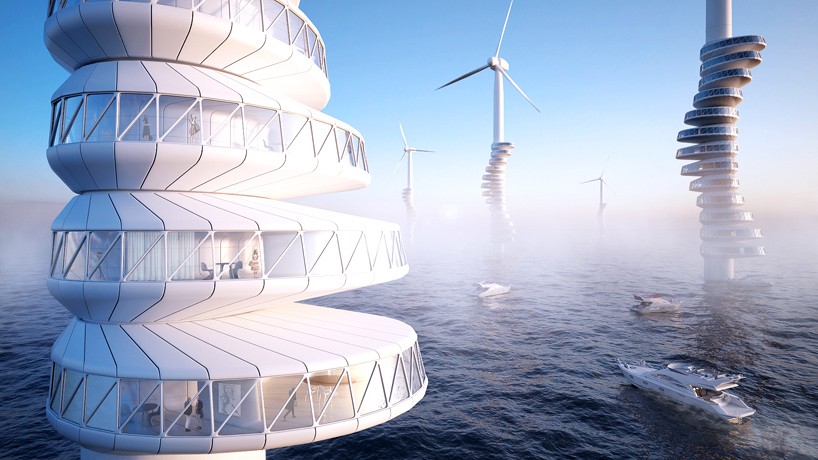 ‘wind pecker’ is a project by german designer goetz schrader that envisions the concept of inhabiting wind turbine parks. the design arose out of an increased awareness to the appearance of large wind turbine structures on both the sea and land. wanting to transform the large energy sources into something more than just functional machines, they are rendered as habitable dwellings. 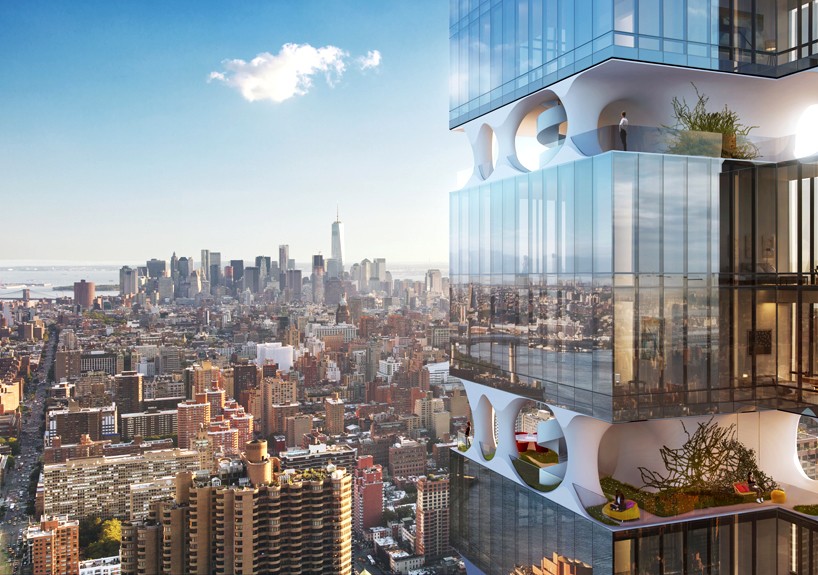 the current trend towards ultra-slender residential towers in manhattan reflects a seismic shift of global wealth towards the private sector. traditionally, NYC’s skyscrapers stood as a testament of corporate dominance, but this new typology of super tall, thin buildings heralds both a new program and function. ODA architecture responds to this phenomenon by conceiving an architectural scheme that adapts to the latest living demands.

heir concept is a tower that melds urban living with the dream of a suburban backyard. they imagined this by stretching an NYC tower vertically beyond its original program, inserting gaps of around 5 meters in height between every two floors. these voids contain full sculptural gardens equal to the floor area of the building, and that would be directly accessible from each apartment. 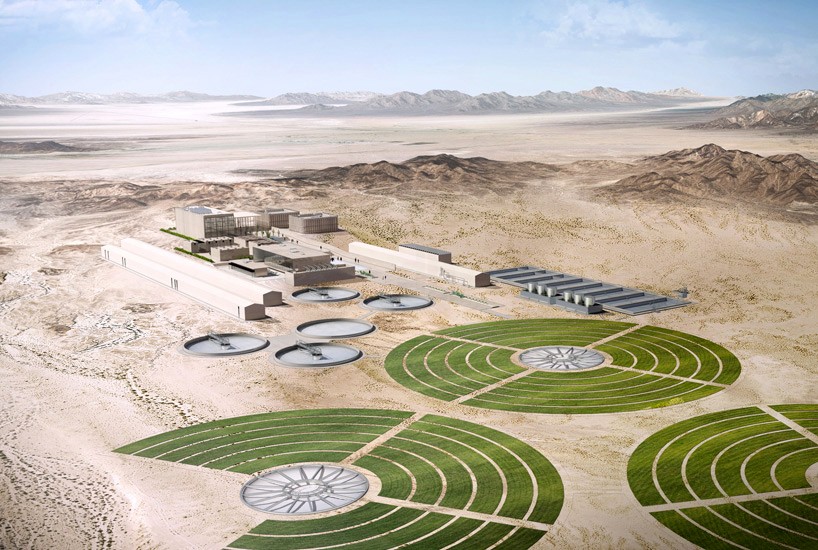 as california prepares itself for another year in drought conditions american and international professionals — of all sectors — continue their efforts to end the water crisis. online publication archinect recently held ‘dry futures’, a competition that casts architecture as a primary role in creating water-use infrastructure. the contest was split into two categories, speculative and pragmatic, the former of which was won by ali chen for her project, ‘grassroots cactivism’.

chen’s proposal reframes the situation to reach beyond the individual, and focuses on creating a higher level of organization and direction moving forward. ‘grassroots cactivism’ utilizes the nopales cactus, a drought tolerant plant that’s fit for both human and animal consumption, and remarkably, is able to effectively clean polluted water. of the plant, the cacti mucilage — or inner pulp — can be adapted to improve and revolutionize existing wastewater management systems. 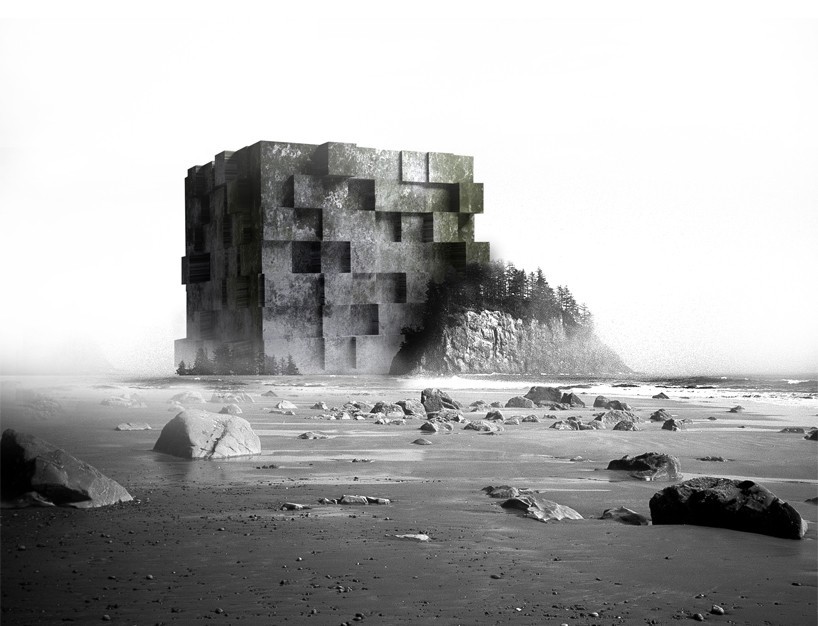 for his ‘lighthouses’ series, cuban graphic designer adrian labaut hernandez illustrates structures with a beacon of golden light on top. these buildings are presented in desolated landscapes rendered black and white, except for the illuminating detail, giving an overall melancholic sensation.

hernandez comments on his lighthouses stateting that they are, ‘destined never to be happy, isolated beings on earth, without any attachment to life, except for a few workers who hear the winds from the top and the song of the sea in what becomes their house. they don’t ask for much and don’t expect much either.’ 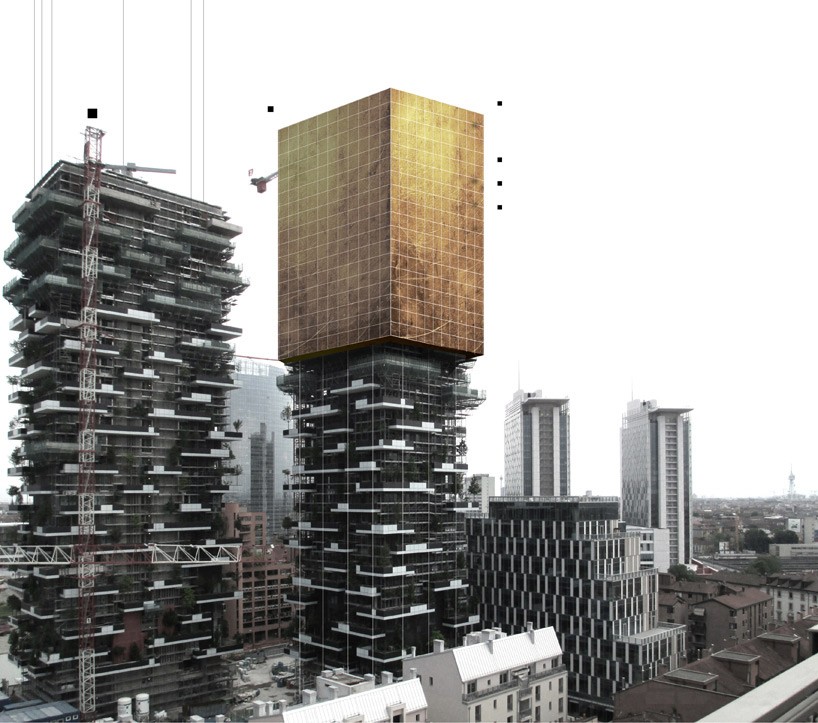 continuing his ‘alternate architectural landscape’ series — previous designboom coverage here — adrian labaut herandez pictures the future of milan. hernandez describes the work as, ‘a city absorbed in its will for development, exposed to the omission of the real values of architecture, replaced for the rapid ‘resolution’ of the present issues.’ as in the original works, each illustration is presented against a current backdrop of its setting. 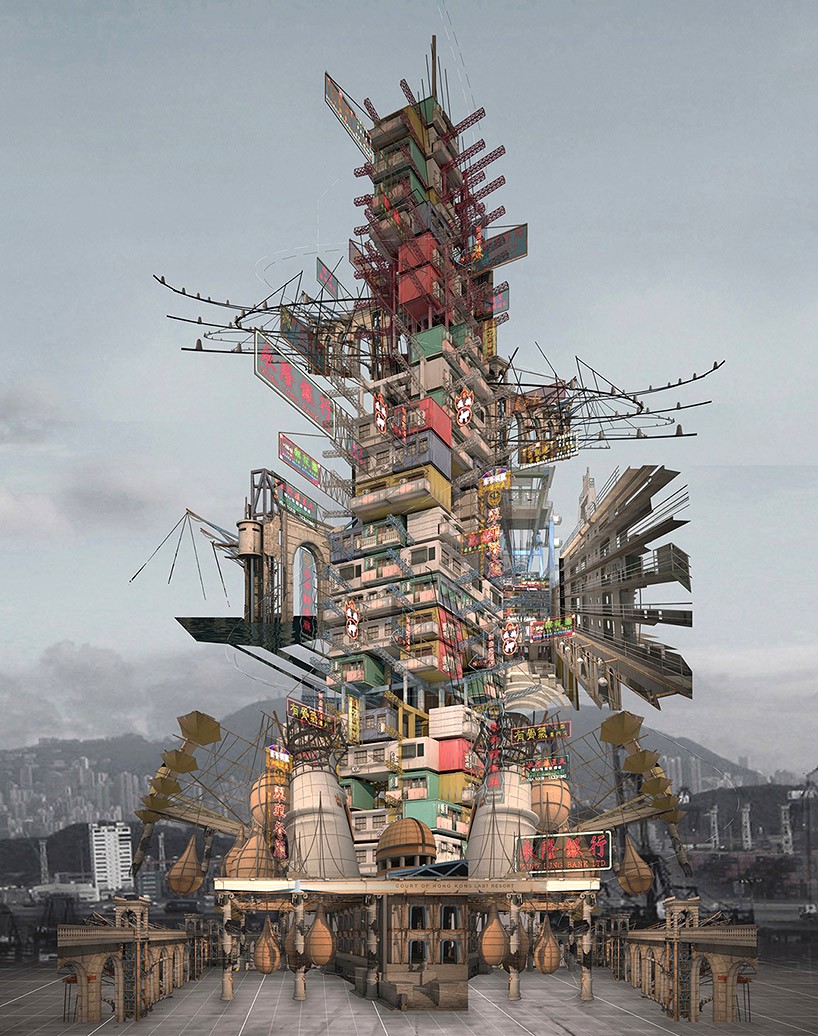 it’s 2047, and on the fringes of an overthrown hong kong lies a massive citadel; home to the deposed rebels of the fallen city. through carefully deployed urban planning, emboldened architecture, and symbolic sculptural motifs, the fictional creation by kelvin ip is a warning, and critique, of china’s trajectory. deemed the ‘last resort’, the project explores key points and critiques surrounding british colonial rule, the credibility of the one country, two systems policy, and issues raised by the pro-democracy umbrella movement.

swim or sink by mayank thammalla 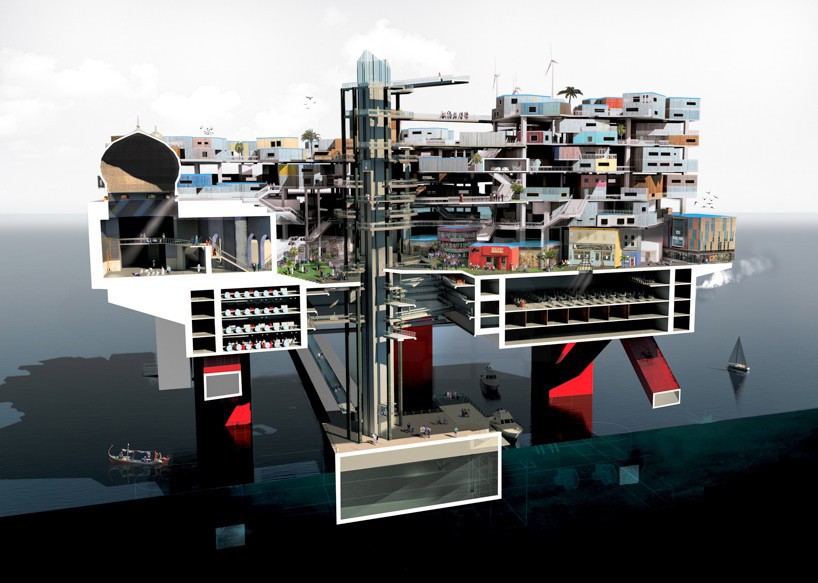 maldives is a small island nation located roughly 600 kilometers (370 miles) of the south-western tip of india. it has a population of approximately 330,000 spread amongst 192 of the areas 1,000+ islands. between the country’s near-equator locale, perfect sand, and lush blue-green water — it sounds like a paradise; and it is, for now. maldives possesses another interesting trait, it has the lowest average ground elevation in the world, sitting a mere 1.5 meters (4′ 11”) above sea level.

herein lies the republic’s problem. as oceans rise — currently about 3.5mm (0.14”) a year — the islands will continually sink deeper into the depths. by year 2100, given current trends, water will rise anywhere between 0.8 to 2 meters (2.5′ to 6.5′). asides from swamping most coastal cities worldwide, the height increase would essentially render the maldives and its people extinct. to address the inevitable relocation of the maldivian people and culture, mayank thammalla created the ‘swim or sink’ project. 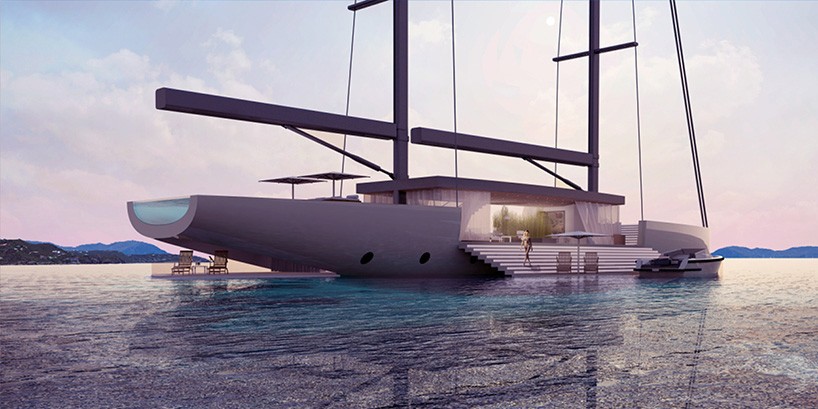 freelance architecture and yacht designer lujac desautel, well known for his nomination for the 2014 young designer of the year award by the boat international media, unveiled the luxurious ‘SALT’ yacht to follow the‘glass’ concept, envisioned in 2014. designed to provide passengers with a flexible, transparent and honest life aboard, its framework enables people to transform and engage the watercraft with the sea. its steps that fold down to the water, glass façade that slides open like a curtain, and its rear beach club, puts people at water-level and looks as if it’s built up from the ocean.