interior design is the in-depth approach to the aspects of the architectural design that create and upgrade the internal ambiance, following functional and aesthetical forms that add meaning. this year we received several thousand submissions from our readers, with designers, artists and architects from across the globe sending through a diverse range of works that we have shared with our audience over the last 12 months.

we believe that maintaining an open dialogue with creatives is extremely important, and we are happy to showcase the high level of original projects of our readership. from renovated hutongs, to floating staircases, we highlight 10 interior reader submissions of 2015. 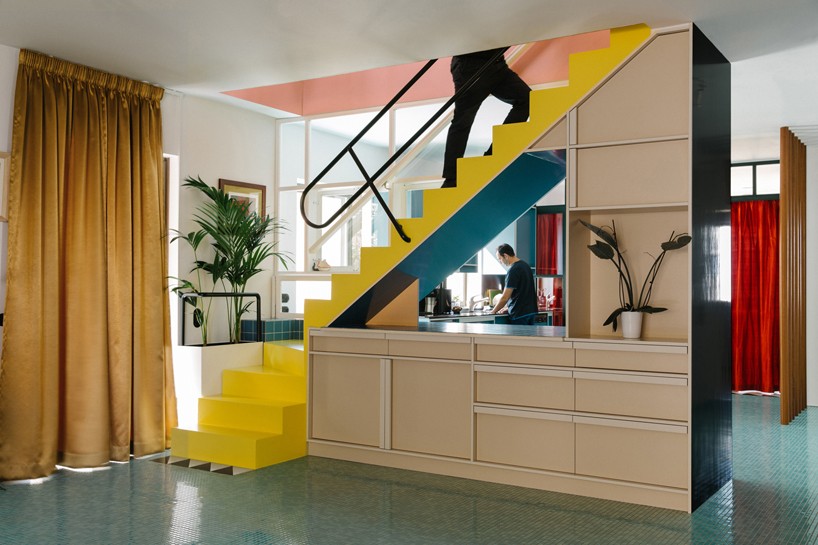 completed in 2014 by point supreme architects in athens, greece, ‘nadja’ consists of two apartments on subsequent floors that were renovated and connected with a stair in the middle. the areas throughout the family residence are flexible, all focusing on a central location rather than sectioning off. every room is furnished with custom-made constructions that double as visual connectors between spaces. cupboards, seats, stairs, shelves, and tables are mixed with numerous typologies of screens, interior partitions, curtains and other filters. 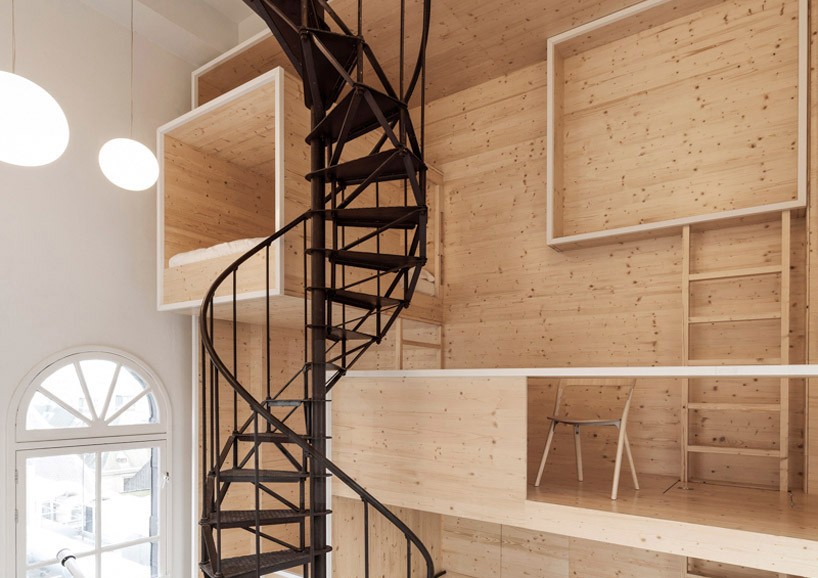 together with the rijksmuseum, de bijenkorf invited artists, writers, musicians, architects, and designers from all around the world to take part in their artist in residence program. located in a small tower in the historic heart of amsterdam, the department store wanted to reimagine the artist studio and create a unique experience and cultural haven. the installation designed by i29 interior architects brings two worlds together in one called ‘room on the roof’.

the architects like to refer to the work as ‘playing with scale and perception as in the universe of ‘alice in wonderland’. 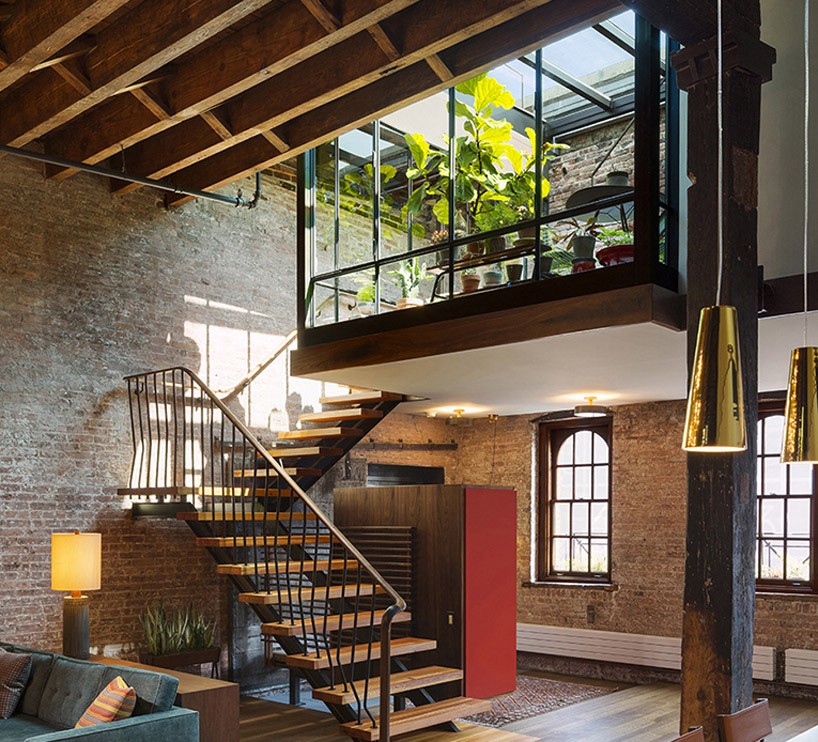 in manhattan’s landmark tribeca north area, the top floor and roof of an 1884 caviar warehouse are reconceived as a warm and open residence with a fluid connection to the outdoor environment. new york-based andrew franz architect PLLC has realized the scheme with a relocated mezzanine, where a sunken interior court comprising a retractable glass roof connects to a green roof garden above. this gesture of subtracting volume from the interior brings the outdoors into the primary living zones. the roof, peeled back, showers the spaces with natural light. when open, ample air flow enters what was once a poorly ventilated and dark loft. by night, the court acts as an internal lantern illuminating the loft below. 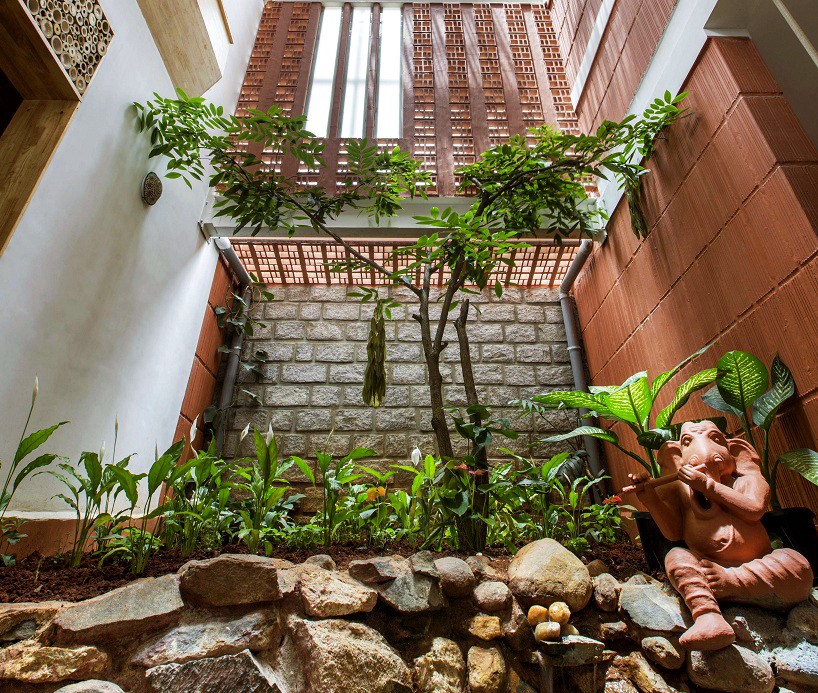 bangalore-based firm kham design designed the ‘prasanna nairs residence’ with the interest of identifying and promoting crafts. the house is a haven for traditional artistry with an additive of typical design elements, like the expression of the long-established oxide flooring, and the bamboo based furniture. it also creates a large canvas for the creation and exhibition of indian artworks. the use of indian screens of jallis, creates an avid play of light both on the walls as well as on the floors and roof. this game between light and shadow moves throughout the house and enriches the volume.

archstudio renovates hutong house into a bright and clear residence 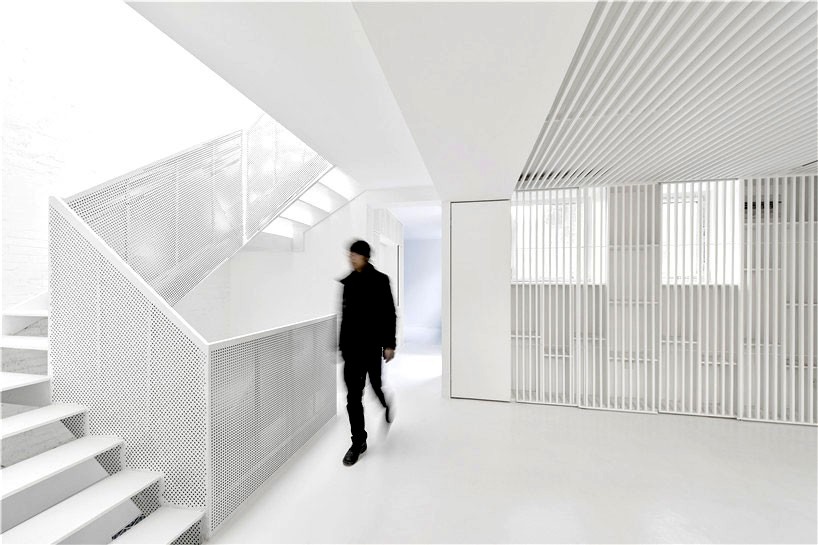 beijing-based archstudio renovated the interiors of a grey brick house for a young couple located in a hutong within the dongcheng district. the brick and concrete structured building consists of three floors, one of them underground, making the illumination of the residence the biggest concern related to the design. the project’s aim was to improve the interior based on the conditions left by the previous owner and to reshape it into a bright transparent and clean atmosphere that would create an interesting contrast with the outside. 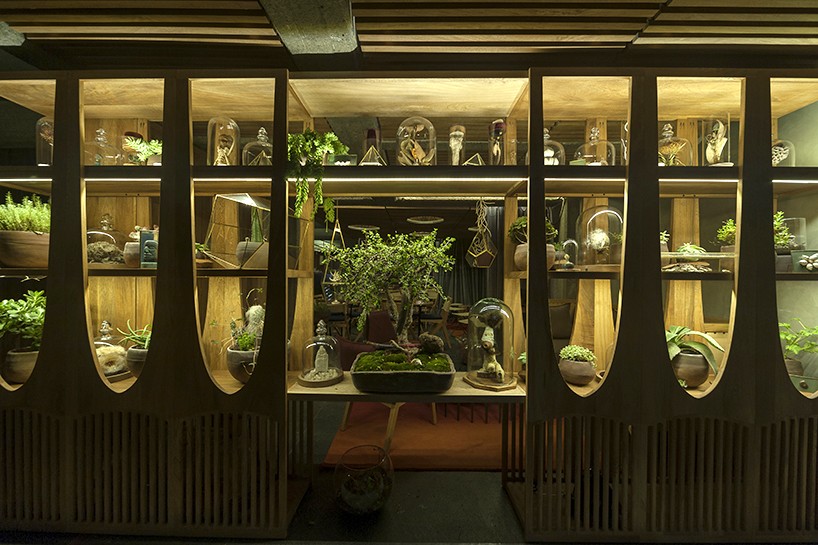 ‘xaman bar‘ designed by estudio atemporal was a project that consisted in creating a high-end cocktail bar through the intervention of a basement, in an inconspicuous building at colonia juarez in mexico city. the only sign that lets you know that there’s a bar on the area, are some signals on the floor that lead to a downward stairway that brings you to the front door. once inside, the user is received by a wooden display cabinet filled with carefully selected plants and objects curated with the shamanic concept of the bar. functioning as a first visual barrier, this cabinet also creates a hallway that leads to the bar — a monolithic and stone structure that is one of the main elements of the design. 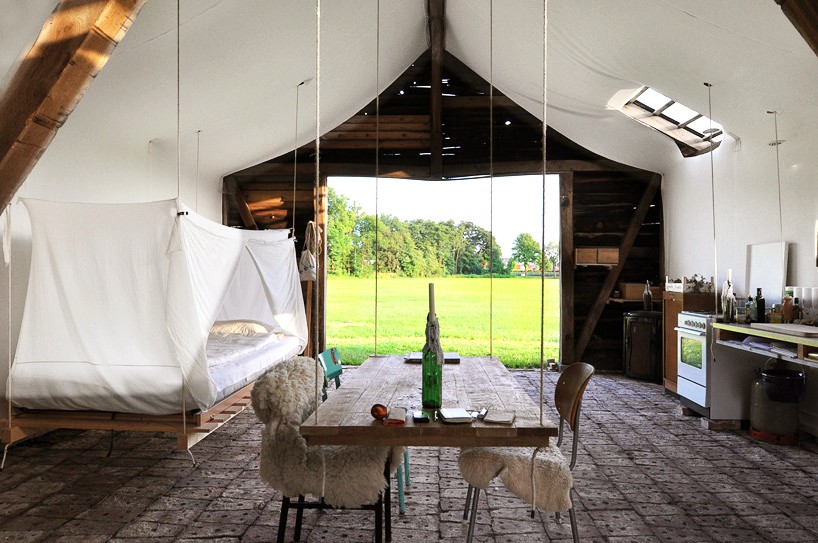 on the field, in the daytime, light enters the wooden architecture
image courtesy of uli schallenberg

designer uli schallenberg modified an old wooden barn into a living space, keeping in mind the standard definition of a ‘simple life’, and providing a home that fills life’s most basic needs. using a barn as a residence allowed schallenberg to realize new architectural possibilities, which he has integrated into the existing structural system. a tented white canopy undulates overhead, making the interior a luminous space despite the dark wooden material it is originally built in. much of the furniture in the home’s interior — including the bed, dining table top, and kitchen cooking surface — have been carefully hung from the ceiling, levitating almost all domestic items within the abode. a swing hanging towards the barn’s rear offers a relaxing space for privacy and fun. 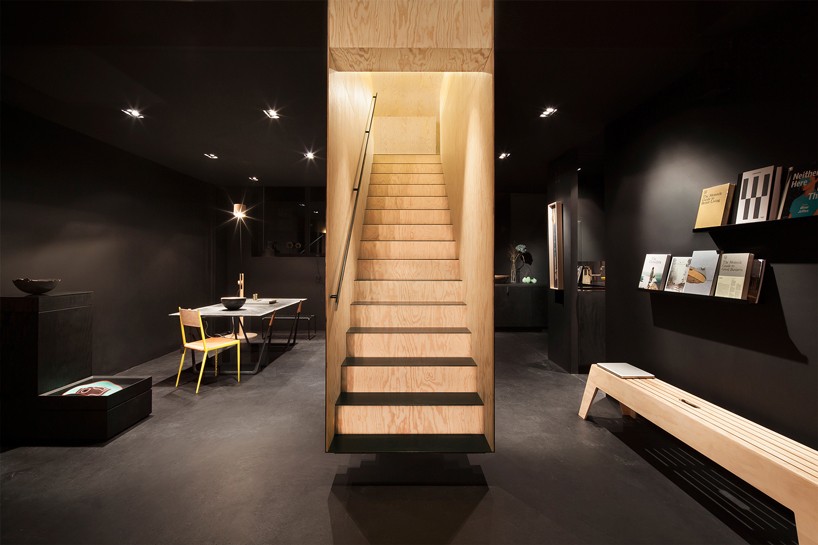 in berlin, a concept store named ‘bazar noir‘ opened its doors to the public for the first time, showcasing a  selection of hand-picked objects and interior accessories that targets lovers of design who enjoy furnishing their homes with extra-ordinary unique pieces from around the world.

hidden fortress was the studio commissioned to develop the spatial concept of ‘bazar noir’, realizing the two-floor interior. in order to allow for a constant change of exhibits (often one-off pieces), the task was to plan an extremely adaptable and flexible zone, that at the same time maintained the raw and lofty character of the building’s existing atmosphere. 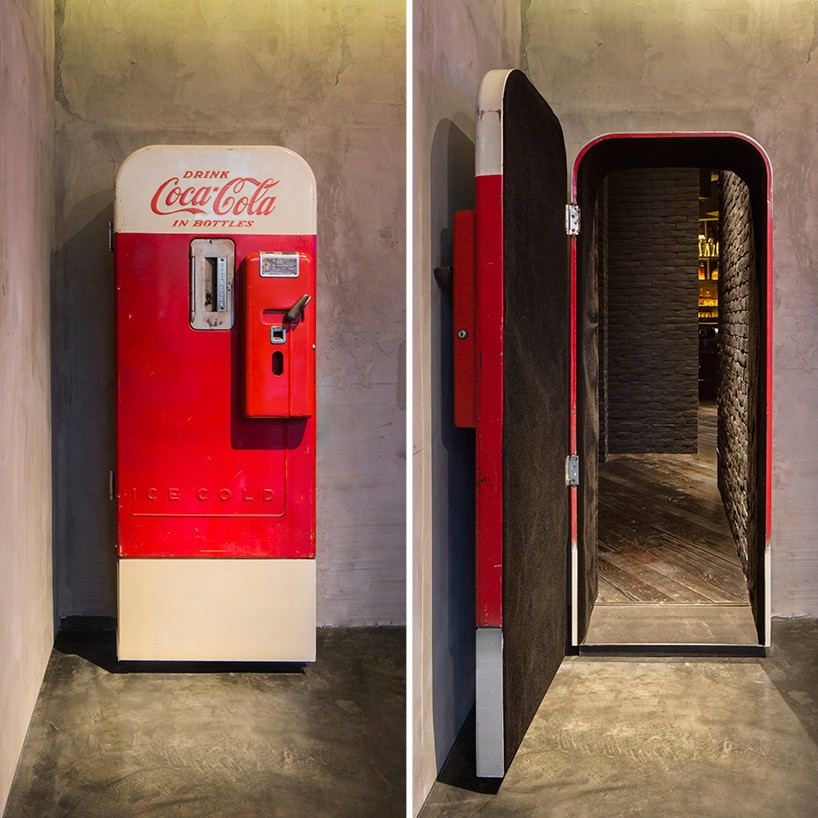 ‘flask and the press’ is an unconventional duo that upends the traditional speakeasy concept: an intimate contemporary lounge concealed behind the façade of a sandwich shop. together, they’re a juxtaposition of light and dark, elegance and funkyness, personal and playful.

aiming to launch a speakeasy in the heart of shanghai’s former french concession, mixologists and their partners commissioned alberto caiola the development of the concept, location scouting and its space design. ‘considering that shanghai has already seen its fair share of hidden speakeasy-themed bars and lounges we decided to build suspense and break it in an entirely unexpected fashion,’ says caiola. ‘in order to maximize impact, we would need to execute the project in a fundamentally different, distinct way, building expectations and genuine surprise by creating contradictory, anachronistic aesthetics. 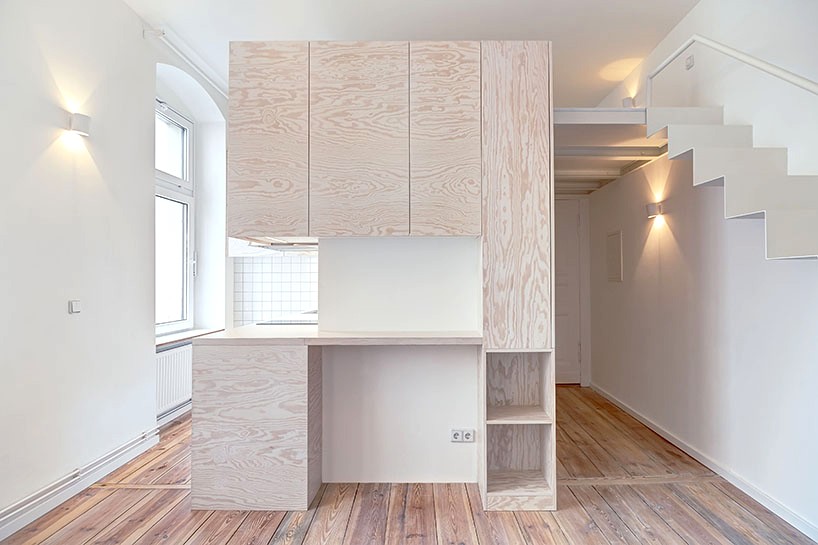 in order to give the area its own visual identity, all elements were designed to exist without touching flat’s ceiling
image © ringo paulusch

berlin-based architects spamroom and john paul coss were given the challenge of sensitively updating an art nouveau micro apartment in the german capital. dating back to the early 1900s and measuring only 21m2, the flat was in desperate need of modernization and a spatial reorganization. like many buildings of its area, the original layout split the area into two small, separate rooms — kitchen, bedroom, with shared toilet in an auxiliary area downstairs. former owners had previously altered the space by deciding to replace what was the kitchen with a private bathroom. aside from giving the inhabitants a more convenient bathroom, it exacerbated the already disproportionate floor plan.