plans have been presented for a skyscraper which, once completed, will rank as the second tallest building in new york. known as ‘tower fifth’, the building would stand at a height of 1,556 feet (474 meters). for reference, one world trade center — the city’s tallest building — tops out at 1,776 feet (541 meters).

gensler is the design architect for the project, which will be located just north of st. patrick’s cathedral, east of fifth avenue between 51st and 52nd streets. the project will also include the city’s highest observatory, which will offer a range of experiential, cultural, and entertainment spaces. 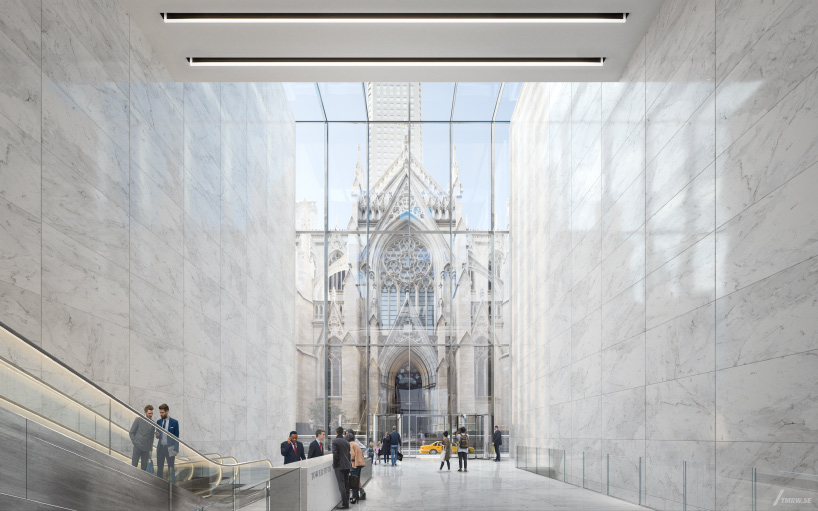 all images by TMRW, courtesy of gensler

gensler designed the tower in collaboration with harry macklowe, founder of macklowe properties. macklowe was also the development firm behind 432 park avenue, which, at 1,396 feet (426 meters) is new york’s current second tallest building. ‘climbing 1,556 feet above manhattan, the 1.3-million-gross-square-foot tower creates a new paradigm for how a supertall structure meets the street and interacts with its neighbors,’ explains gensler.

at ground level, a glass-enclosed public space spans an entire city block. according to the design team, this area extends the civic realm into the building footprint, leading visitors to shops, a food hall, and an auditorium. the office floors feature 960,000 square feet of tenant space alongside amenities focused on wellness. from an environmental standpoint, the tower will be wrapped in a pioneering closed cavity façade system which intends to reduce solar heat gain by over 70%.