fusing traditional craftsmanship with contemporary architecture, PLAYFUL design studio has realized the ‘red shine gateway’ in taipei to celebrate wu shen (general guan yu, also known as guandi, the saint of war). situated on the banks of da han river, the wu shen temple in the xinzhuang district of the city has been a local religious base for nearly three centuries, attracting a great number of worshippers. for 2020’s festive events, the organizer’s wanted to bring a revitalized touch to the old gateway, which PLAYFUL design studio was commissioned to develop. 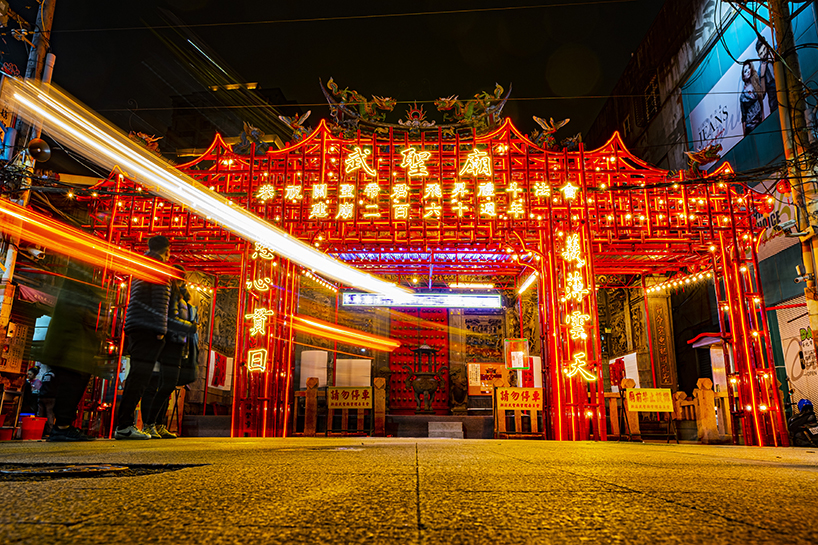 all images © my day off co.ltd. / eason chen

located at the heart of xinzhung temple street with a direct path towards the riverside, the temple has become an important local landmark. for the past three centuries, the temple has witnessed the history of taiwan, and has been expanded, renovated and reconstructed several times. the wooden structure of the two front hallways have already been replaced with reinforced concrete, however, the rest remains unchanged since the last renovation in 1868. 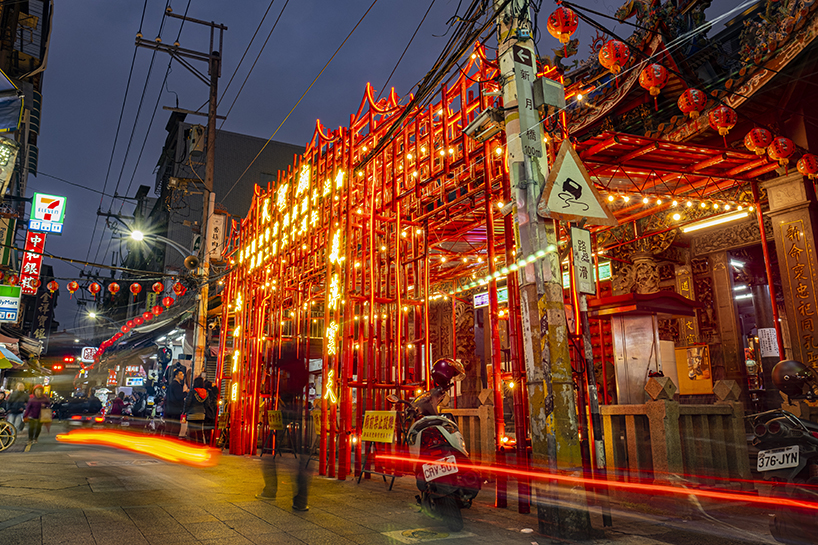 crowds coming to the night market pass by the gateway

the gateway in front of the temple is known as the dividing line between the worlds of the mortal and god, and by walking through the gateway, you are able to enter the sacred space of god. for most of the annual celebrations, the gateway is usually built using a simple temporary construction – typically bamboo scaffolding or steel poles tied together with wires and applied with printed styrofoam or wooden boards. 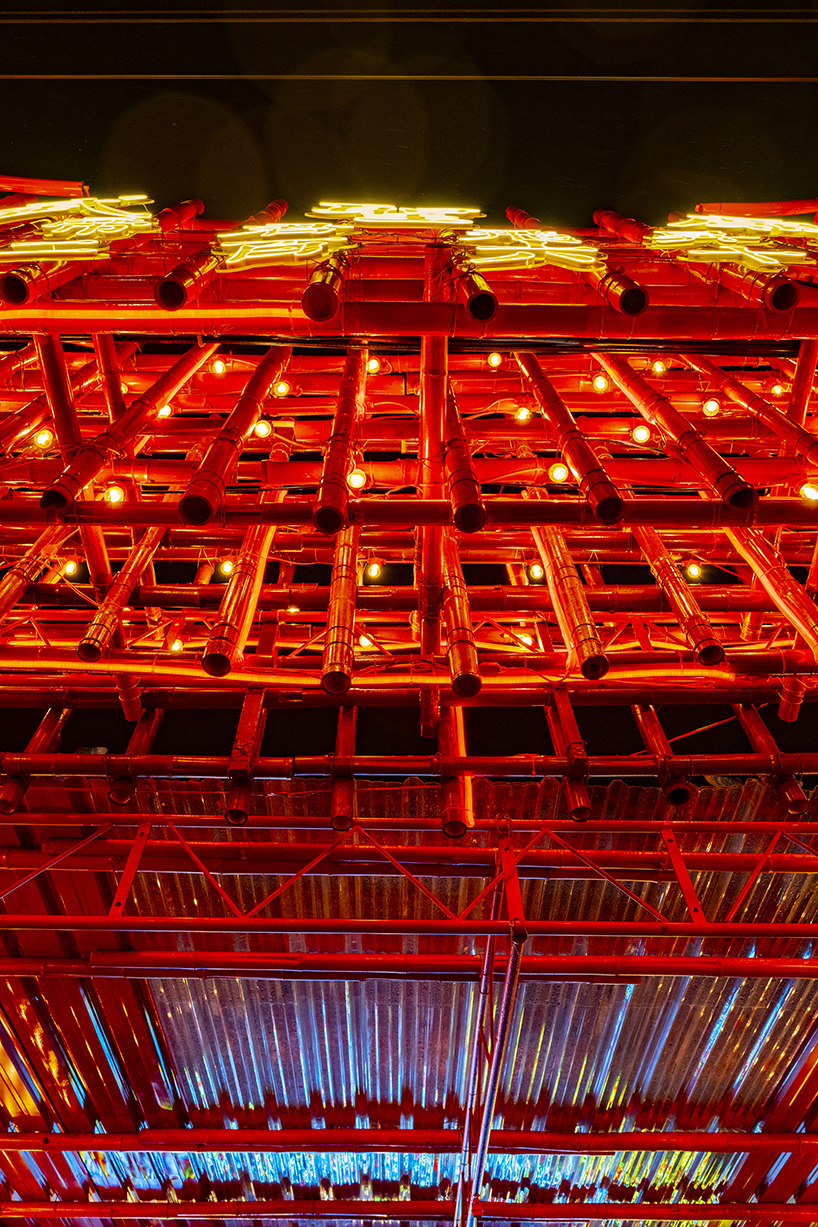 the contemporary gateway is composed of different building materials

in addition, the courtyard between the gateway and the temple is usually covered with corrugated metal plates to create a shelter from the sun and rain. it is a semi-open ground for the crowds during the ceremonial celebration. when the events are over, the structure and the plates will be removed, leaving the courtyard open again; the materials can also be re-used in other occasions, and reassembled in different shapes and sizes. 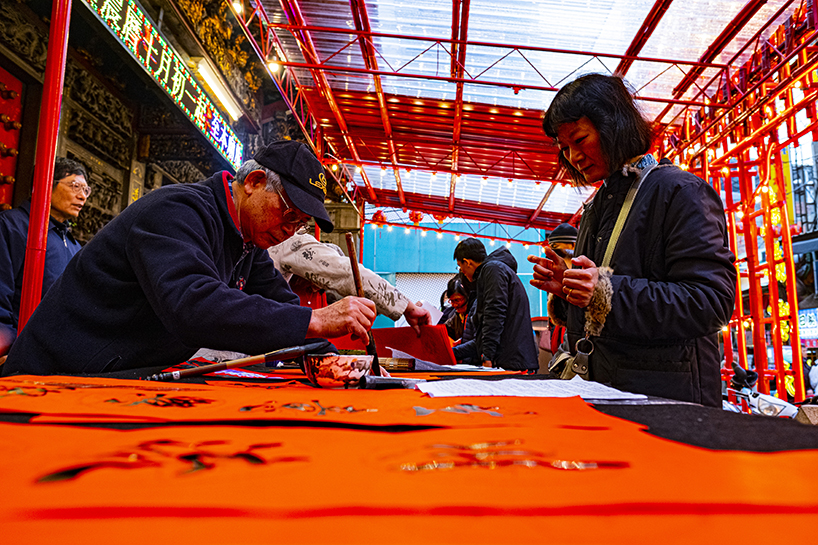 under the transparent shelter, the open space is perfect for calligraphy events during chinese new year

for the name of the new gateway, PLAYFUL design studiochose to represent the personality and noble character of guan yu. ‘red’: the color of integrity, the red-faced image of guan yu, and the different tones of red in the structure. ‘shine’: the design allows light to shine through the semi-open temple courtyard, which portrays guan yu’s bright and brilliant spirit. 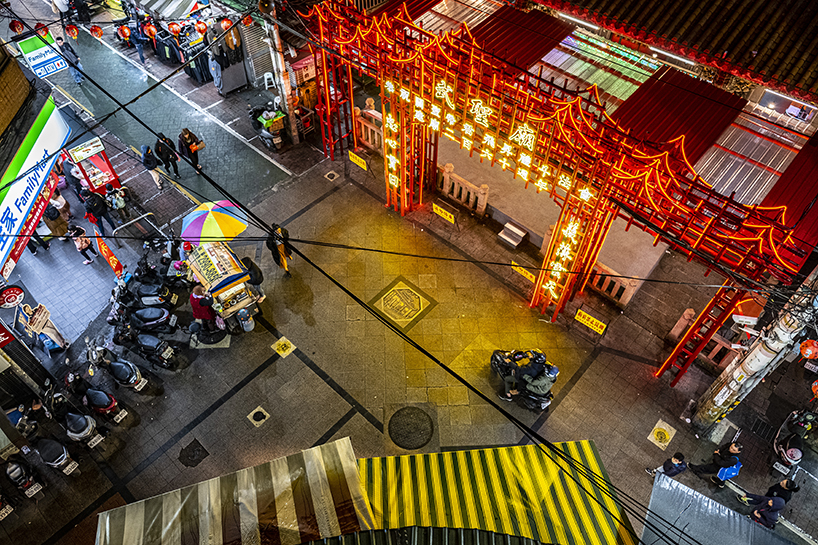 the structure of red shine gateway is built with traditional bamboo scaffolding. the xinzhuang old street was once a famous bamboo market in the ancient taipei basin, also known as the ‘bamboo town.’ as the wu shen temple stands in the center of this very street, bamboo was specially chosen to re-interpret local history. the structure is then supported by four connected arrays of bamboo layers, and each is painted with different tones of red to enhance the visual perception of the space. the red shine gateway and the wu shen temple

for an innovative approach, PLAYFUL design studio made the metal plates of the shelter over the courtyard partially transparent and partially red. through the transparent layer, natural sunlight can gently flow into the temple space, while the red layer symbolizes the red tiles that were widely used to build traditional temple roofs. at night, both vertical and horizontal LED light bars attached to the bamboo structure are lit up. the red illumination is arranged in several settings to show the heart-warming and enthusiastic character of guan yu.

erected on the busy and always crowded temple street, red shine gateway seamlessly blends into the surrounding environment. the existing electricity cables that hover over the street are also skilfully integrated into the bamboo structure, giving the nearby public area a neat and bright look. 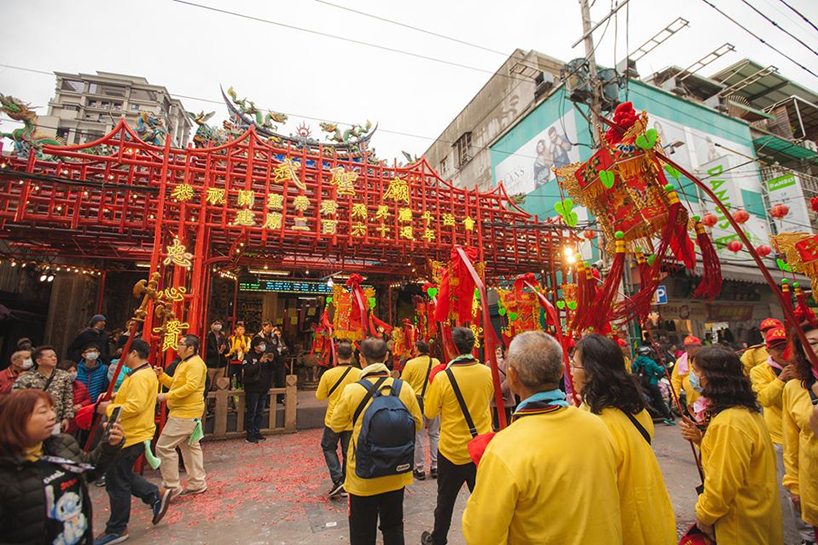 the transformation of the gateway also bridges the gap between people and the temple. the light and transparent spatial transition has successfully brought more visitors and activities into the sacred space. as the original courtyard turns into a sheltered semi open space, during the daytime, neighbors and worshippers are welcomed for praying and ritual events or other cultural activities.  different scenes take place in the quieter evenings. as the shimmering gateway lights merges with the illuminated street and the passing crowds, the wu shen temple stands as a shining light watching over the neighborhood. 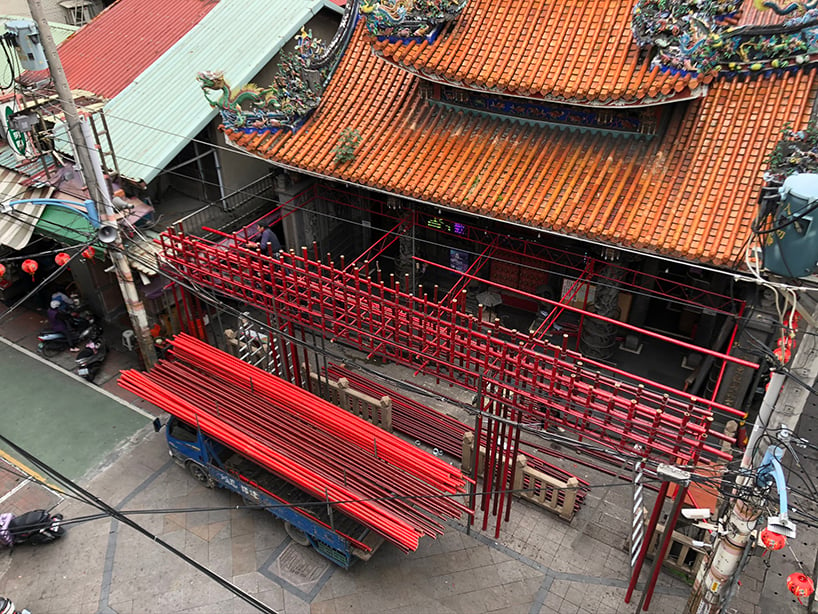 the traditional gateway in front of the temple, temporarily built for ceremonial events

wusheng temple is located on the direct path to the riverside 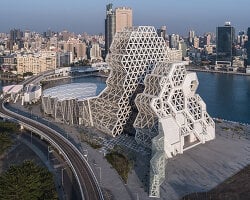 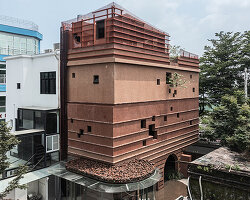 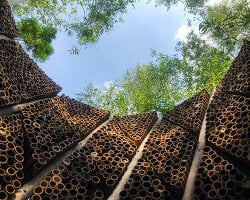