the ‘treehotel’ is set to open this weekend. located in harads, sweden about 60 km south of the arctic circle – currently consisting of four rooms: the cabin, the blue cone, the nest and the mirrorcube. the project was conceived by tree hotel co-founder kent lindvall, a former guidance counselor who came up with the concept with his wife britta. two additional structures are scheduled to open in october: the UFO and a room with a view.

designboom reported in 2009 on the ‘treehotel’ in its concept stage: ‘‘harads’ tree hotel‘. 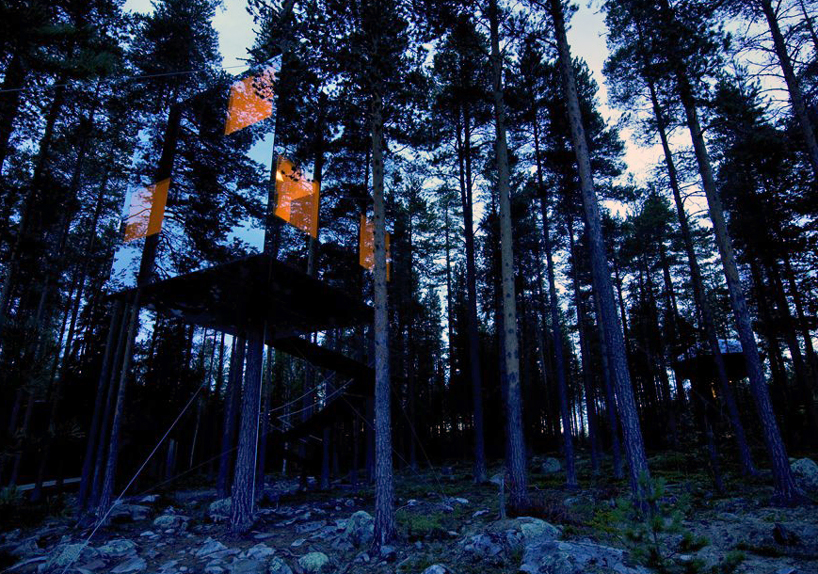 the mirrored structure appears to disappear in low light

the ‘mirrorcube’, designed by tham & videgard architects stands four meters high and four meters wide, and has drawn widespread attention as it will be attached to a single tree and is clad entirely in mirrored glass.

‘everything will reflect in this – the trees, the birds, the clouds, the sun, everything. so it should be invisible nearly in the forest.‘ – kent lindvall 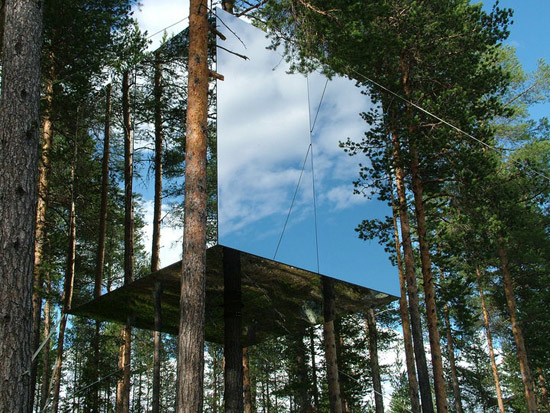 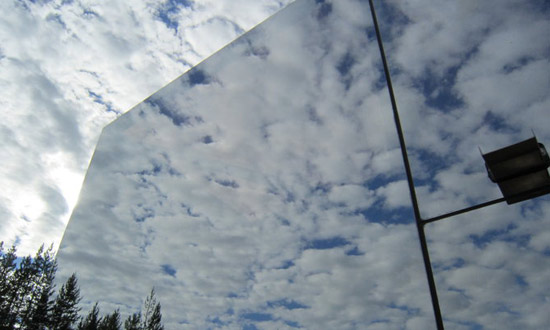 the reflection of the sky 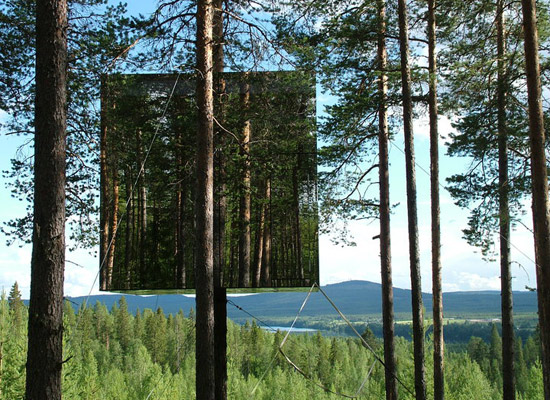 each of the rooms, vary in size from 15 to 30 square metres and are positioned in pine trees between four and six metres from the ground. they have all been constructed from wood and glass and feature an electric floor heating system, a state-of-the-art eco-friendly incineration toilet and a water-efficient hand basin.

lindvall says a special film will be applied to the glass which will be visible to birds. this is just one of the steps being taken to minimize treehotel’s impact on local wildlife says anette selberg, who is in charge of crafting an excursion program for guests.

‘this is untouched forest and we want to maintain it the same way. we decided for example to not offer snowmobile safari which is very common up here,’ says selberg. instead, wilderness walks will be offered. the vision of the treehotel is proving to be a powerful draw from enquiries coming from far and wide. ‘…mainly from europe, but I know that new zealand has been contacting us as well as australia…’ 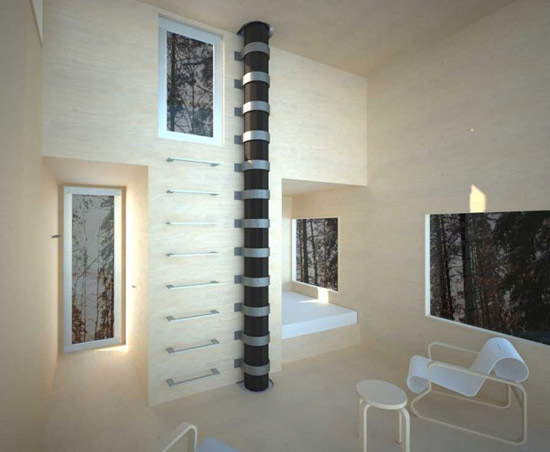 the interior of mirrorcube 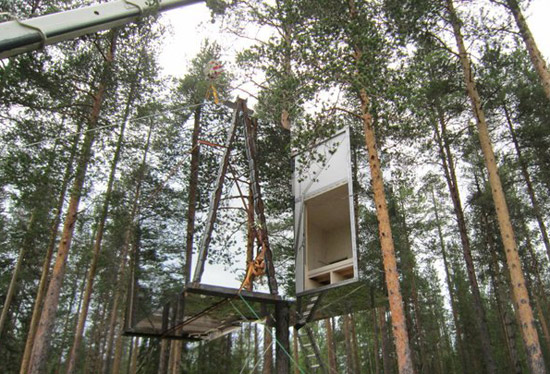 being lifted into position 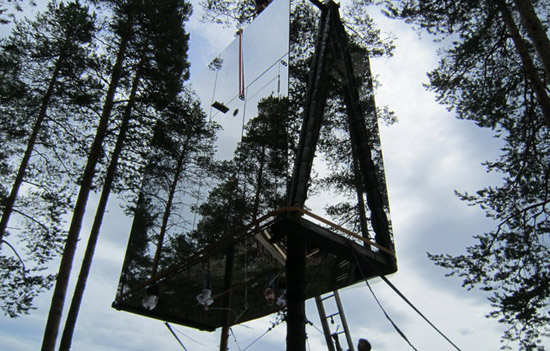 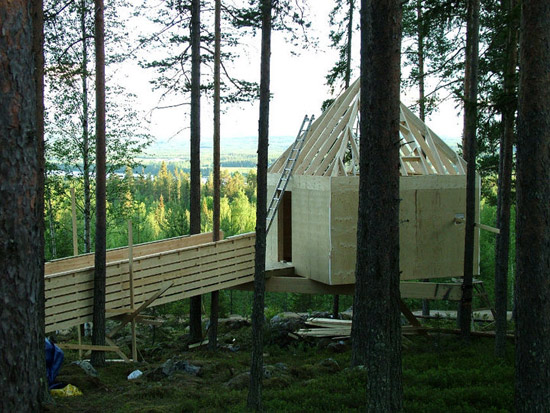 the ‘blue cone’ room is founded on three points of support. access to the tree room is by a bridge from the mountain behind. the building is a traditional wood construction with a facade of split birch. the windows and cupola are made of plastic. 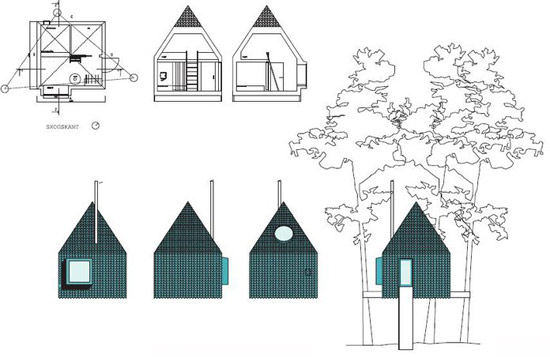 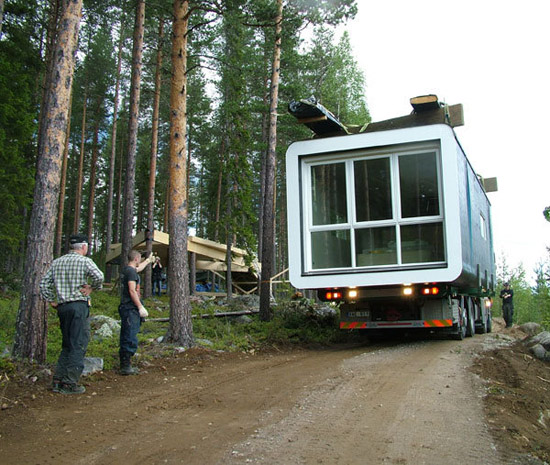 the ‘cabin room’ by cyren and cyren being positioned into place

when cyren and cyren visited harads to view possible sites, they formulated an idea around a horizontal approach: a footbridge leading to a spacious deck. it offers the potential for future expansion, with additional tree houses and footbridges (as well as viewing platforms and places to rest). the basic shape of the deck comes from the supporting trees in the slope. the actual tree house is suspended from the deck. this will hide the volume of the building to a certain degree. the deck is slightly separated from the building in order to make it appear smaller and also to allow the building its own expression. 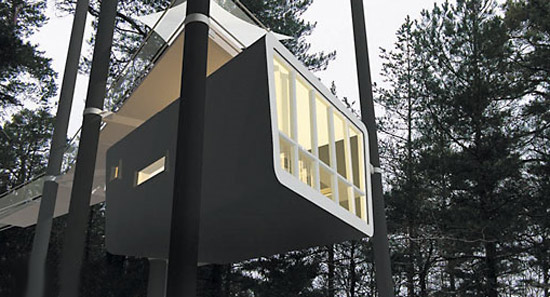 rendering of the ‘cabin room’ 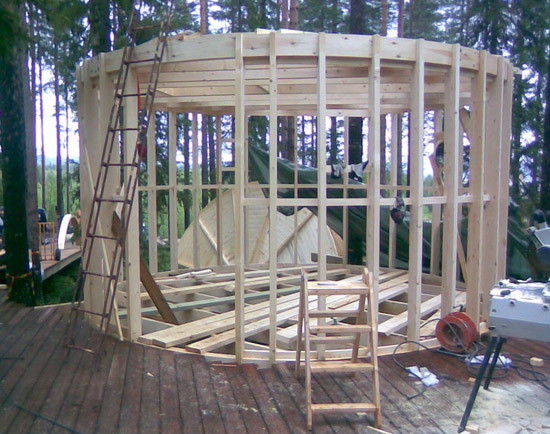 the tree sauna under construction  designed by bertil harstrom/inredningsgruppen

the sauna is intended for 12 people at the one time. 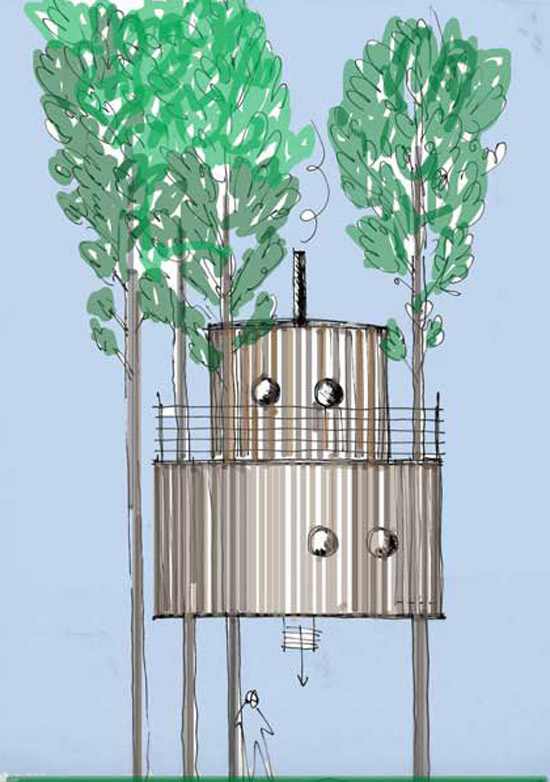 drawing of the tree sauna 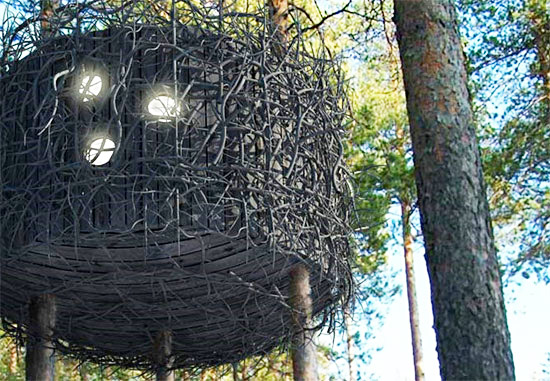 the bird’s nest concept is based upon the contrast between exterior and interior. from the outside it appears as a big nest, only the scale separating it from other nests in the vicinity. discreet windows are almost hidden by the network of branches. inside it’s a high standard room with modern design. a coachwork panel decorates the inner wall. there is space and beds for a family with two children. the bedroom is a separate room with sliding doors. you access the nest by a retractable staircase. 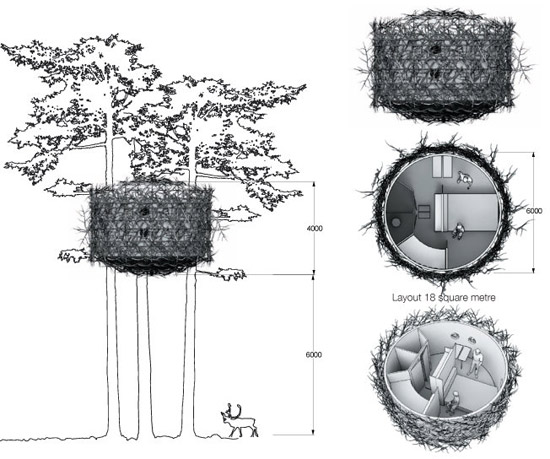 the bird’s nest by inredningsgruppen

the tree hotel will be open all year round, so guests will be able to benefit from either of hot summer or cold winters.

in five years time, the hope is that the treehotel will have 24 rooms each designed by 24 different architects. 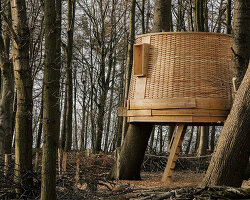 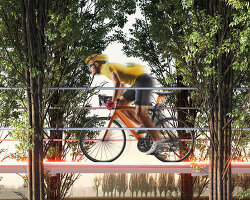