TYIN tegnestue has teamed up with rintala eggertsson architects to complete a unique workspace in northern norway. ‘fordypningsrommet fleinvaer’ is the vision of håvard lund, a jazz musician and composer who acquired the site in 2004. ‘initially it was meant as a workplace for myself, a writing lodge of sorts,’ explains lund. ‘as time went on, I felt an urge, a need, to share what I had found on fleinvær with others. I wanted to create a workspace unlike anything else in the world.’ 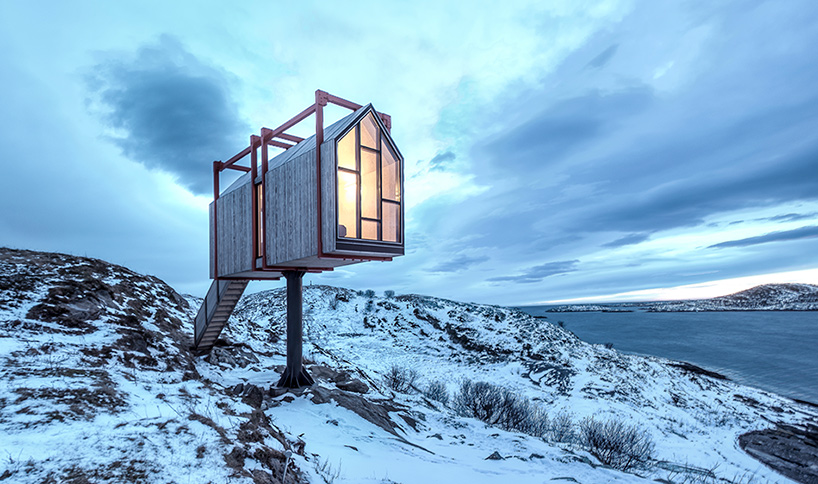 at the top of the hill, the architects created a modern interpretation of the traditional storehouse
photo: pasi aalto / pasiaalto.com (also main image)

years later, håvard lund presented his vision to TYIN tegnestue who in turn sought the expertise of sami rintala of fellow norwegian firm rintala eggertsson architects. the team then set about designing a workspace where musicians, artists, and other creatives could rent rooms for a range of different timespans. the two practices worked alongside håvard lund as well as students and volunteers who were instrumental in realizing the project. 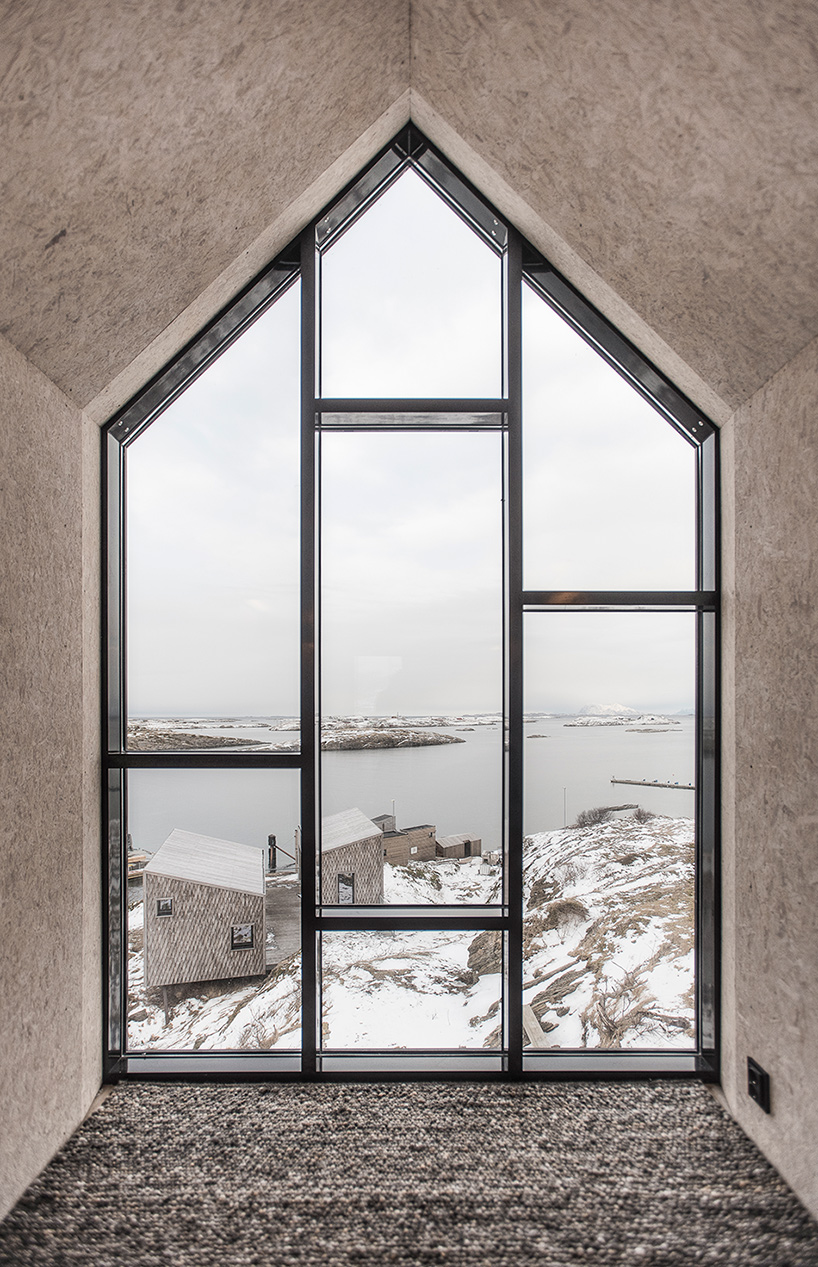 the building has been designed as a place of immersion and reflection
photo: pasi aalto / pasiaalto.com

in order to gain a full overview of the lot, the architects began by carrying out a three-dimensional scan of the site, conducted in corporation with architecture students from NTNU (norwegian university of science and technology). so as not to disturb the isle’s rugged beauty, the design team decided to construct smaller volumes elevated above above the ground. ‘we have taken care to inflict as few wounds as possible on fleinvær,’ says sami rintala. ‘we achieve this in part by making good pathways, spaces between the houses, and a common fireplace. this steers traffic away from the isles more sensitive areas.’ 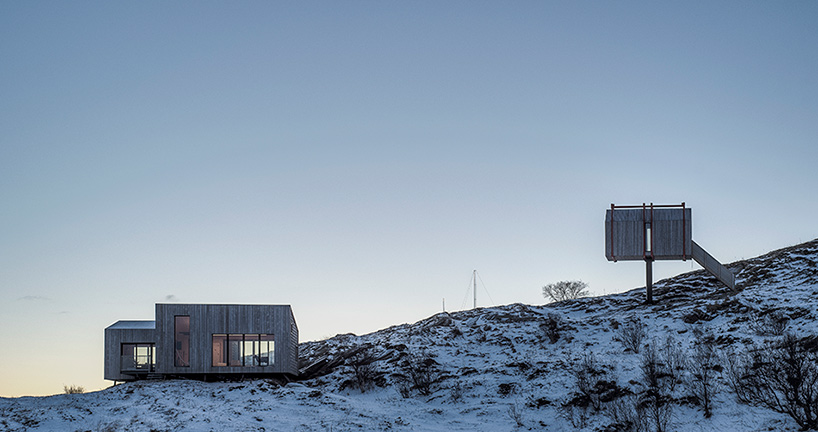 the project comprises a series of volumes, which step down the hill towards the sea
photo: pasi aalto / pasiaalto.com

the project comprises a series of volumes, which step down the hill towards the sea. visitors arriving by boat are greeted with a sauna that hovers above the water. a former waiting room in the old docks has been refurbished to accommodate overnight guests, while four small sleeping units are found further up the hillside. two of these are short and wide with twin beds, with the other two each containing two bunk beds. a pathway leads through these lodges towards the concert room and the canteen. 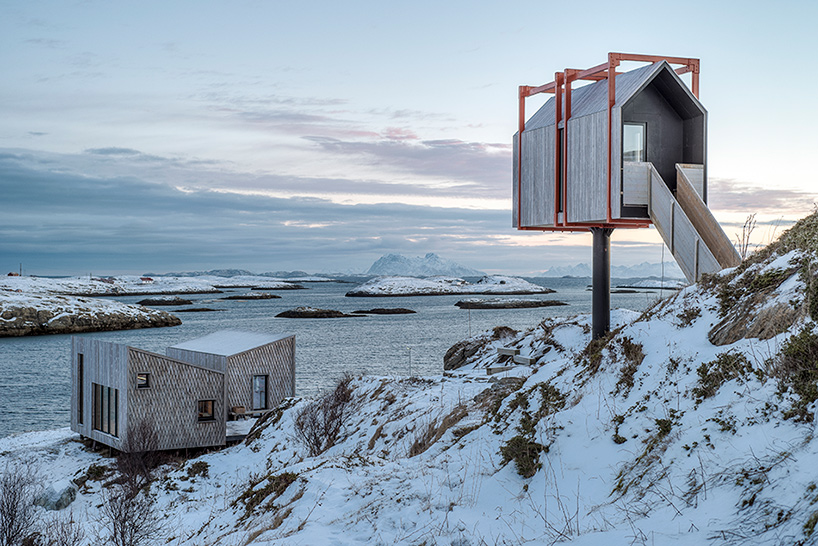 the structure at the top of the hill is enclosed in a steel skeleton
photo: pasi aalto / pasiaalto.com

‘the foundations are minimized, and consist of steel columns curved at 15 degrees angles,’ explains yashar hanstad of TYIN tegnestue. ‘we found that at this particular angle, they hit the ground well regardless, given the possibility of height-wise adaptations to the terrain. in this way we were able to achieve precise pointed foundations without major interference with the ground.’ 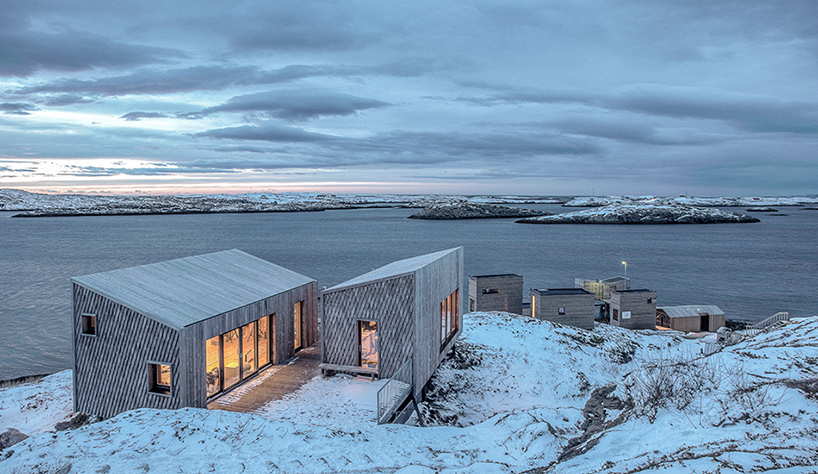 a pathway leads through the structures towards the concert room and the canteen
photo: pasi aalto / pasiaalto.com

at the top of the hill, the architects created a modern interpretation of the sami people’s traditional storehouse — the njalla. built on the trunk of a chopped tree, the structure is enclosed in a steel skeleton, which was pre-made in trondheim by arnt waaberg (an old friend of lund and the project’s practical consultant) and NTNU students. sitting atop a pillar, the building — which has been designed as a place of immersion and reflection — offers sweeping views of the site and the norwegian sea beyond. 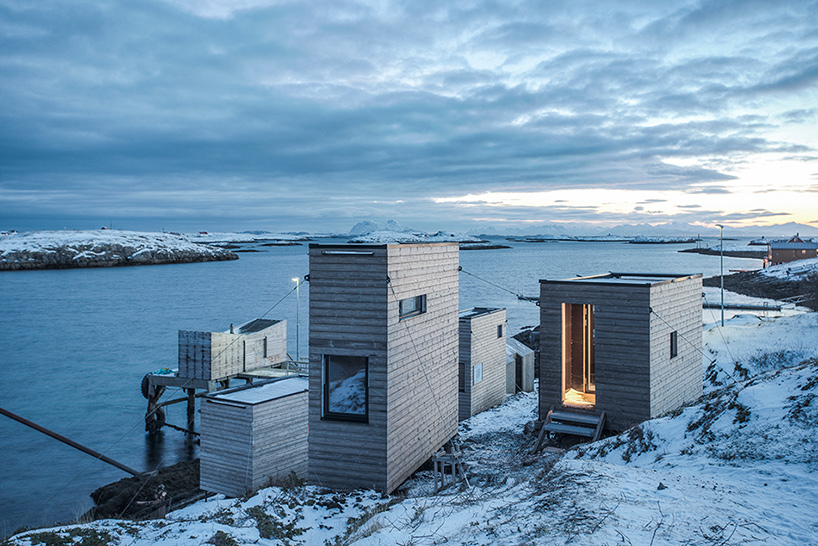 ‘the building teams hard work and dedication has been crucial in completing this project,’ says sami rintala. ‘håvard lund’s uncompromising and positive enthusiasm has also been a driving force in this. ruben stranger [artist and a childhood friend of håvard] and andy devine [australian architect who visited norway to experience the arctic winters] should be mentioned by name. these two have given it their all. these factors have made a tangible reality from our drawings.’ 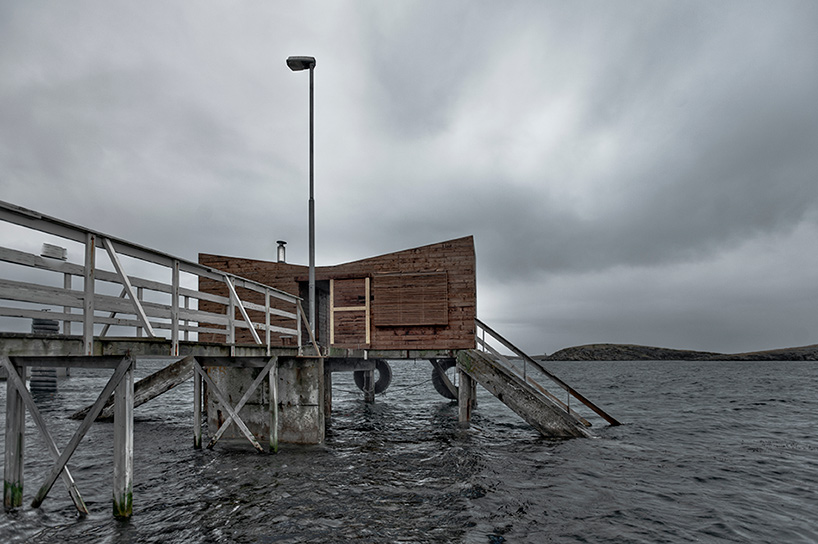 visitors arriving by boat are greeted with a sauna that hovers above the water
photo: pasi aalto / pasiaalto.com 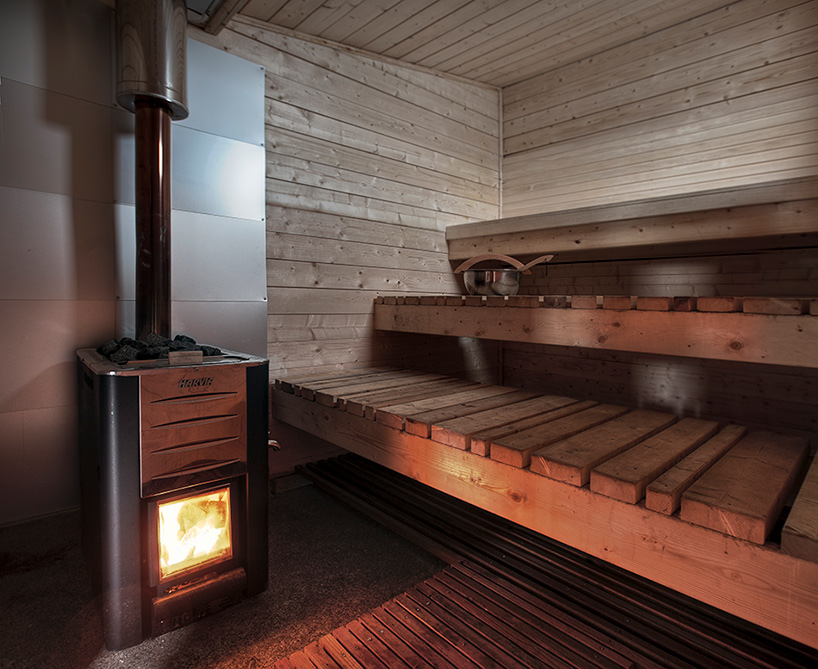 students and volunteers were instrumental in realizing the project
photo: pasi aalto / pasiaalto.com 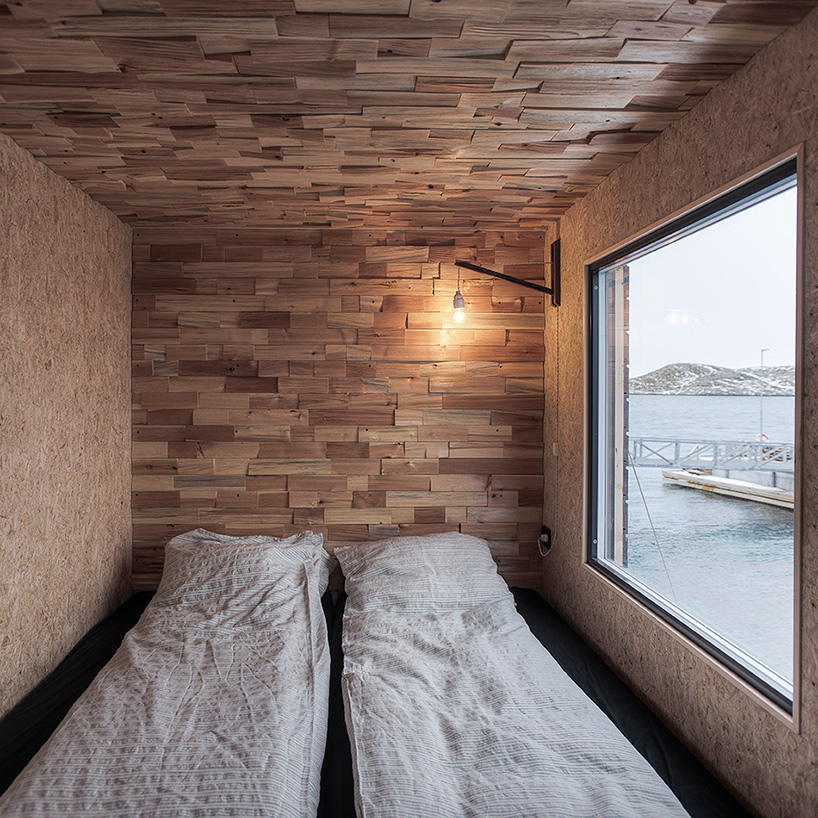 recycled materials have been used throughout the scheme
photo: pasi aalto / pasiaalto.com 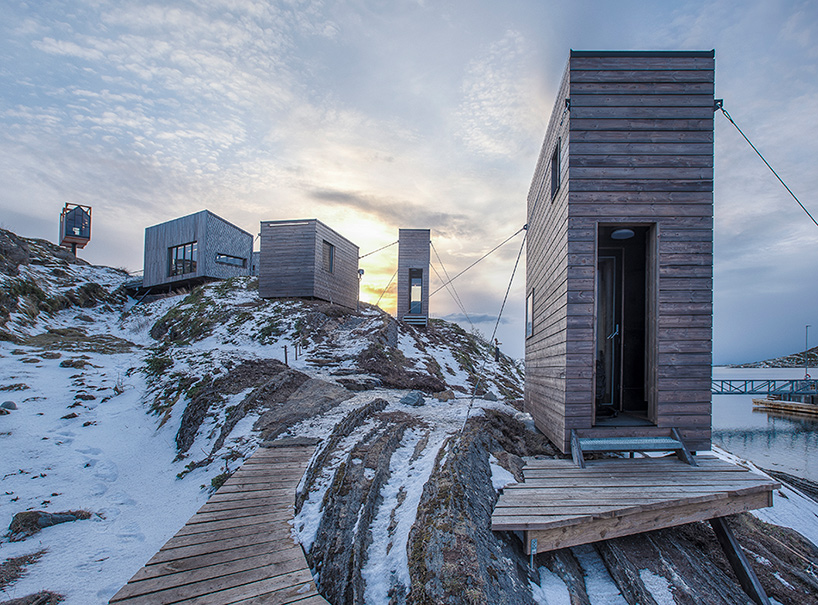 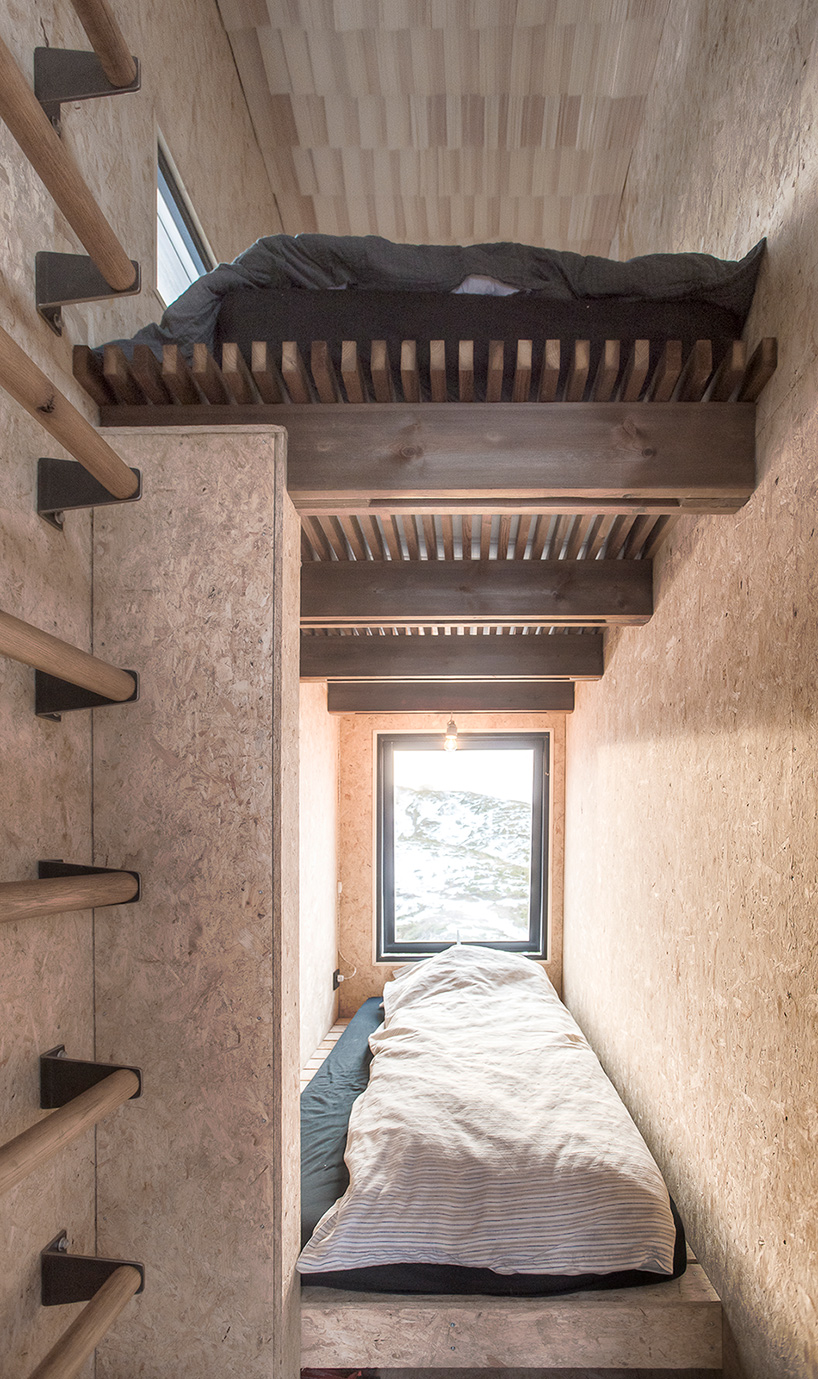 visitors can rent the spaces for a range of different timespans
photo: pasi aalto / pasiaalto.com 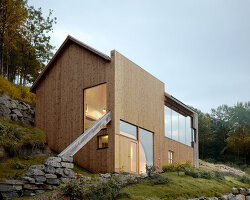 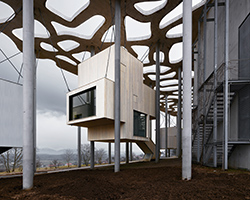 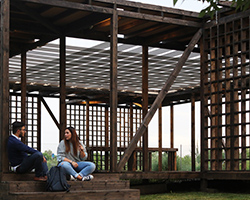 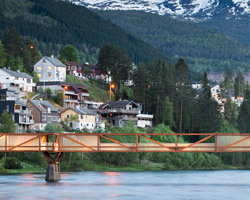 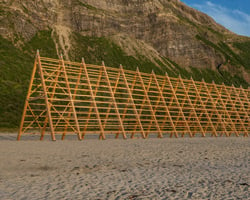 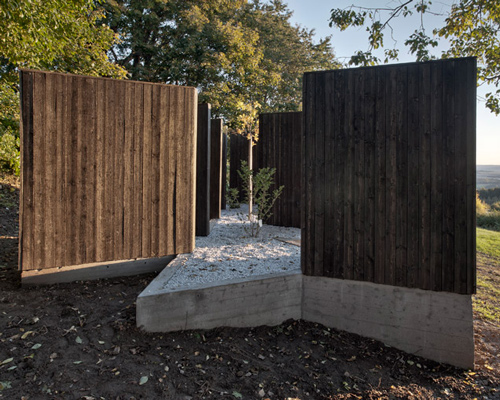 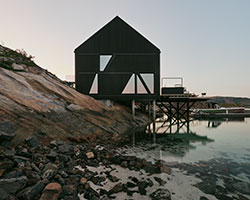 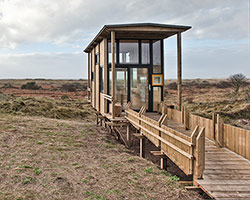 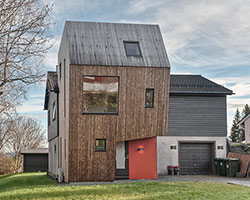 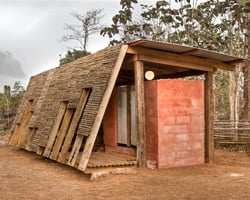