under the title ‘grown in britain’, the UK’s response to the exposition’s theme of ‘feeding the planet, energy for life’ is an immersive pavilion designed by artist wolfgang buttress and delivered by stage one. the scheme, which measures almost 2,000 square meters has been developed around the concept of the beehive, and considers how new research and technologies are helping to address food security and biodiversity.

designboom was invited to view the pavilion in its construction phase, and to meet with project manager mike goodwin, who explained some of the complexities involved in such a demanding undertaking. 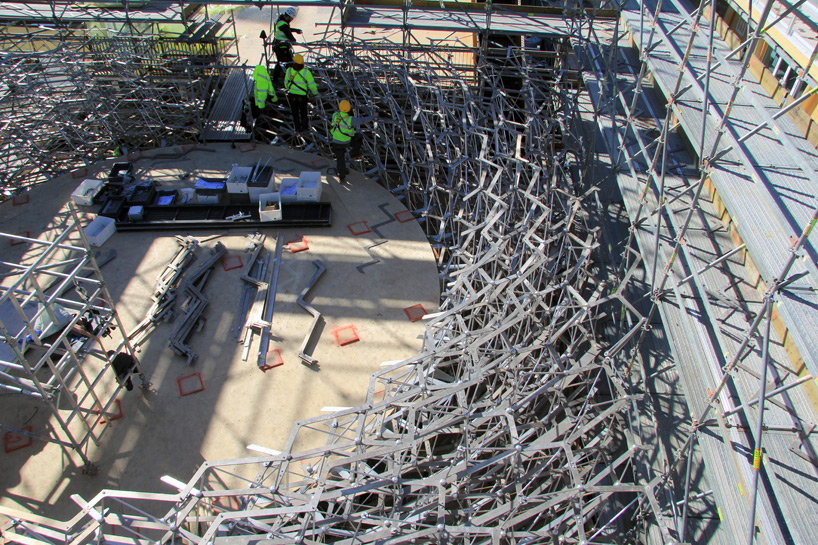 designed to attract those passing along the ‘decumanus’, the avenue that connects the entirety of the site, the pavilion consists of five experiential areas: the orchard; the meadow; the terrace; the architectural program; and the ‘hive’ – a cuboid lattice that forms the centerpiece of the design. sited upon three meter-tall columns, a spherical void is hollowed from the center of the 14x14x14 meter structure, allowing visitors to enter inside. 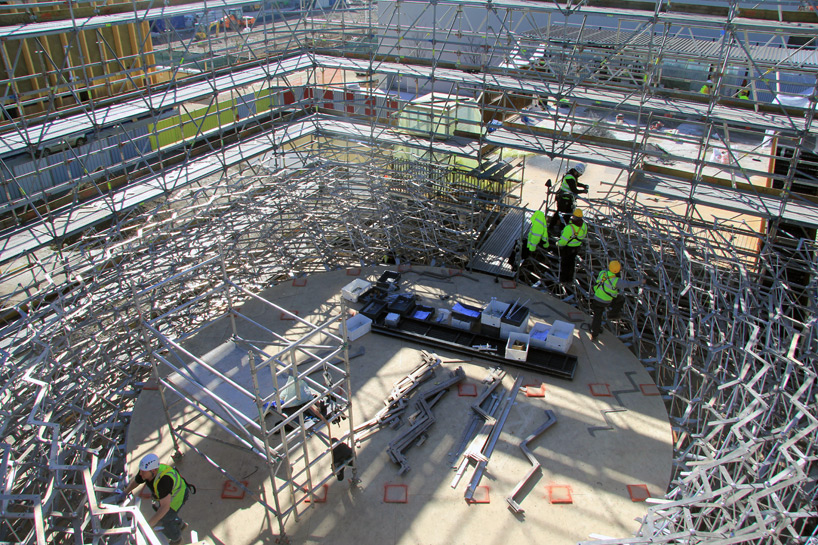 it is clear upon visiting the site that artistic renderings do not do the project’s intricate complexities justice. the hive is not a modular system, but rather a series of carefully numbered parts to be assembled methodically in order.

‘we had a prototype test unit, but it was small in scale’, explained project manager mike goodwin. ‘you can see how the elements connect together, but that doesn’t actually equate to the installation process very easily. now we’re on site, and we’ve got 40,000 component parts, we begin to appreciate the enormity of the task.’ 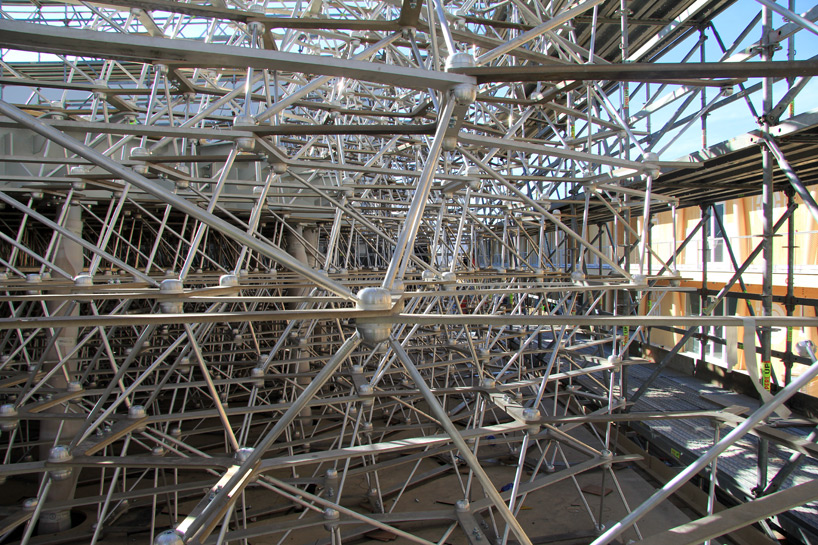 the hive is not a modular system, but rather a series of carefully ordered parts
image © designboom

audio-visual devices embedded within the structure allow it to pulse, buzz and glow according to desired effects, including live signals from a real beehive. accelerometers measure the vibrational activity of the bees and these signals are fed into an array of LED lights embedded within the sphere, generating a dynamic representation of the insects’ activity.

‘it is a learning curve,’ continues goodwin, ‘and certainly the inner six layers being the most dense and the first to install, were the most difficult. but, work rate increases as you learn and now that we’re getting into the open sphere area the process is increasing in speed.’ 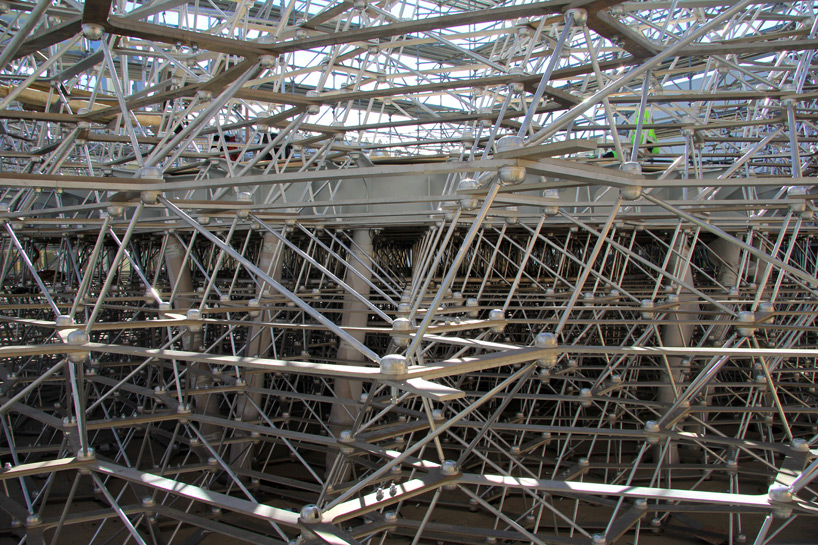 LED lights are embedded within the dense structure
image © designboom

the logistical complexities extend to the remainder of the pavilion, with a condensed time-frame testing the expertise of the project’s experienced team of architects and engineers. the long narrow plot, closely bordered by the hungarian pavilion to the left and a service building to the right, also generates its fair share of difficulties. a minimal amount of floor space means that resources and materials delivered to the site must be used as quickly as possible, as storage space is severely limited. vehicular access is also restricted, with neighboring pavilions progressing at varying stages of completion. 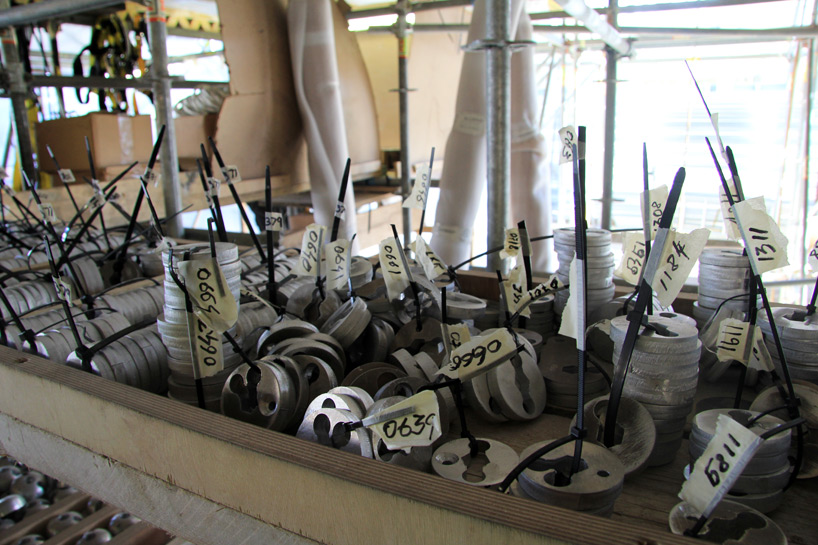 stage one’s experience in dealing with large scale events, including olympic opening ceremonies, has proved to be an important factor at all phases of the project’s development, overseeing changes in design, materials and program. as we build up to the expo’s opening later this year, stay tuned for our ongoing coverage of the event and see designboom’s previous report on the UK pavilion here. 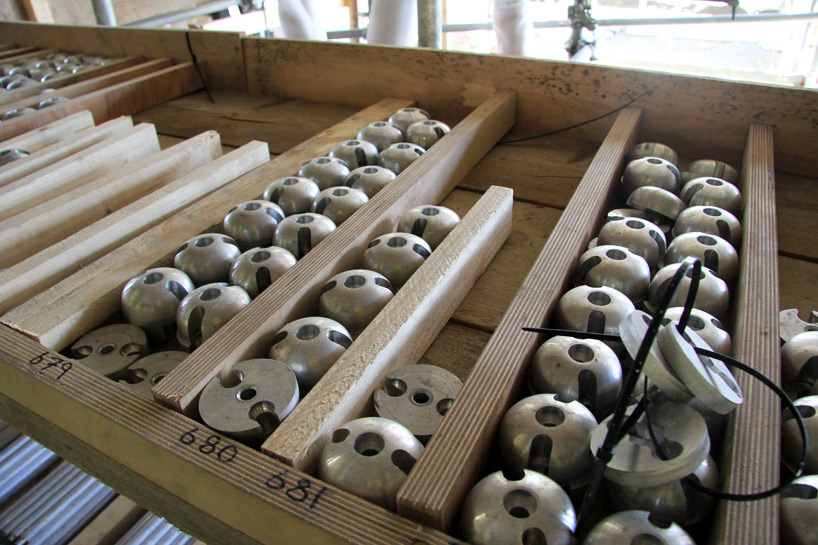 as space is limited, materials are stored beneath the hive
image © designboom 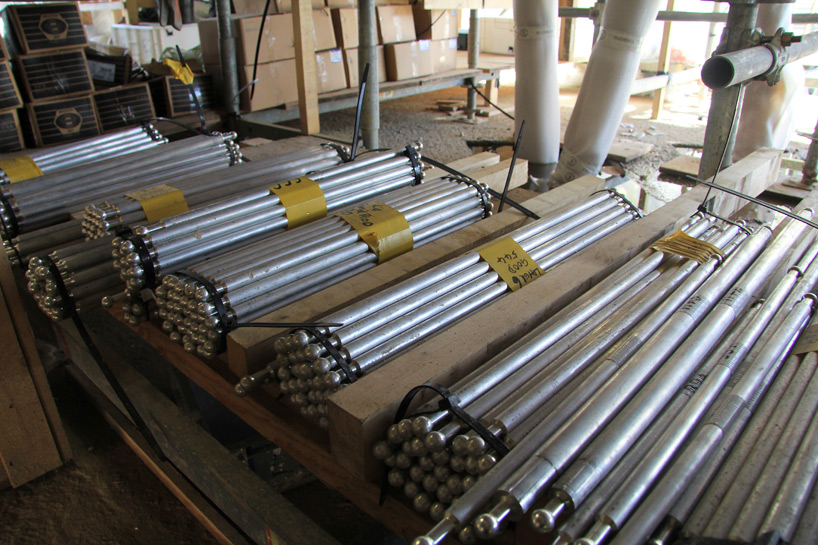 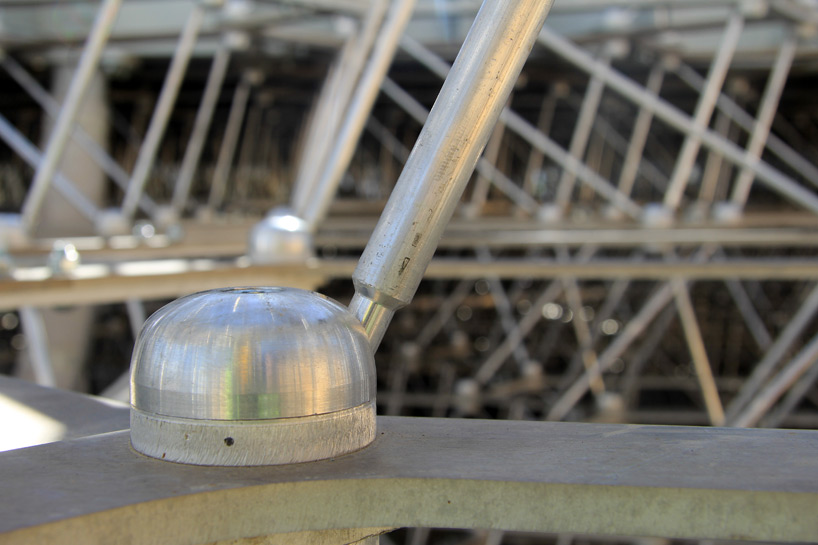 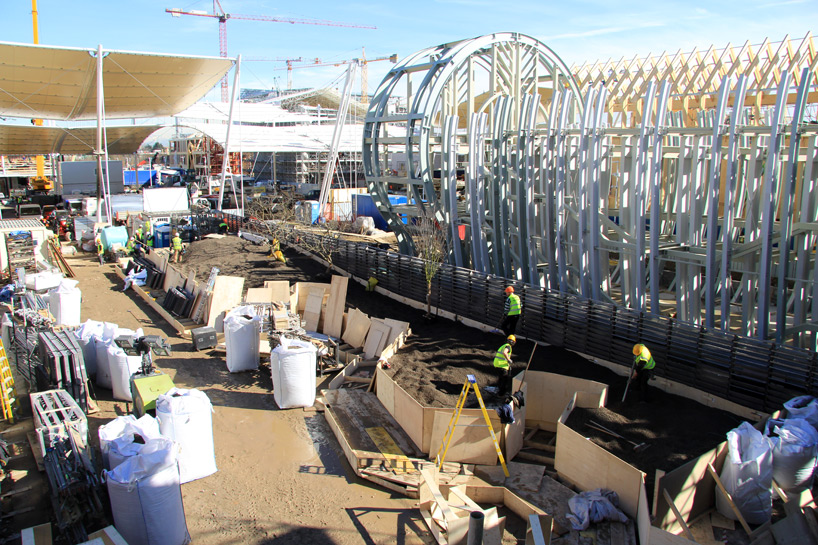 view of the approach to the pavilion, where a 40 meter meadow will be grown
image © designboom 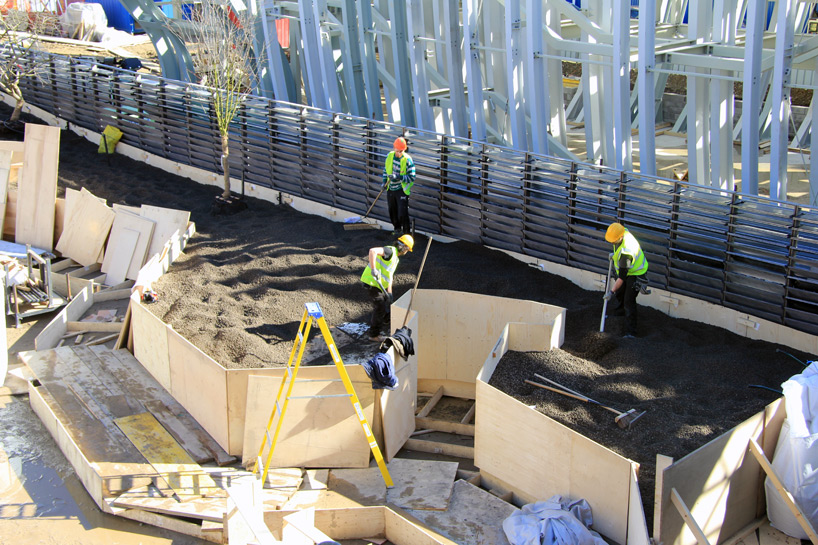 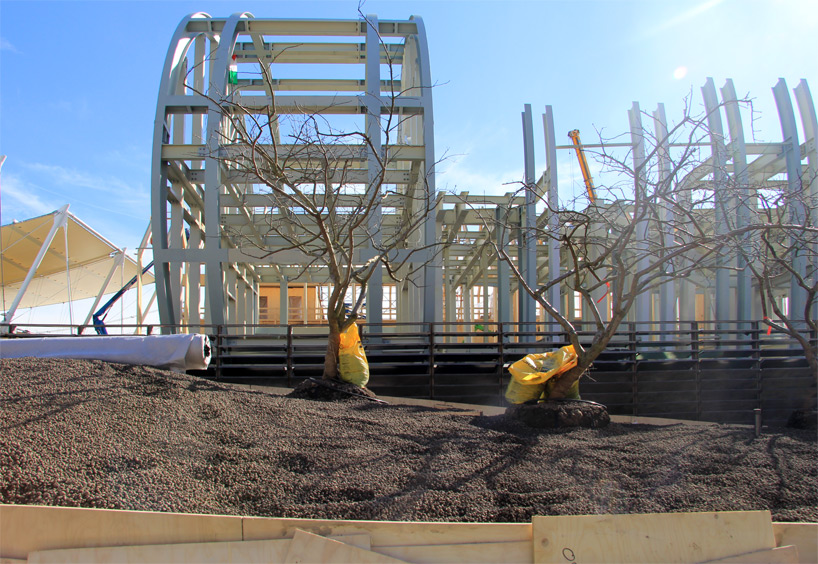 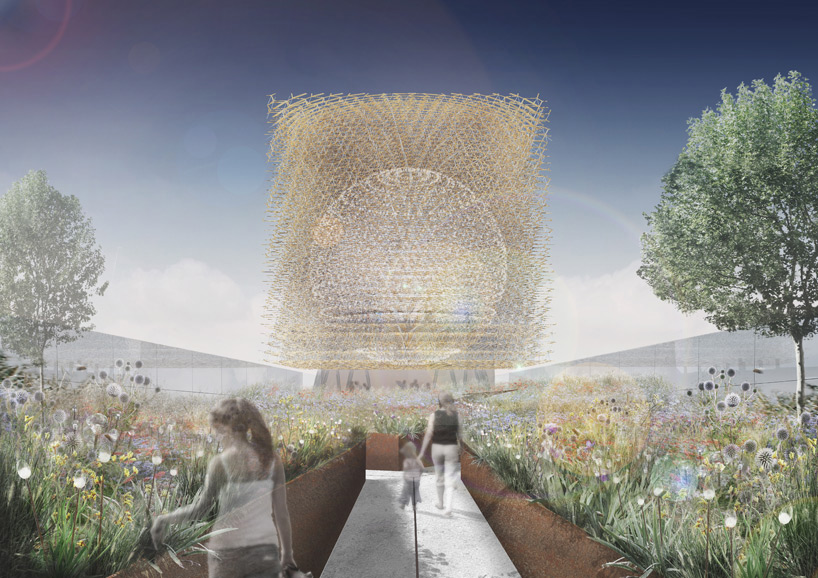 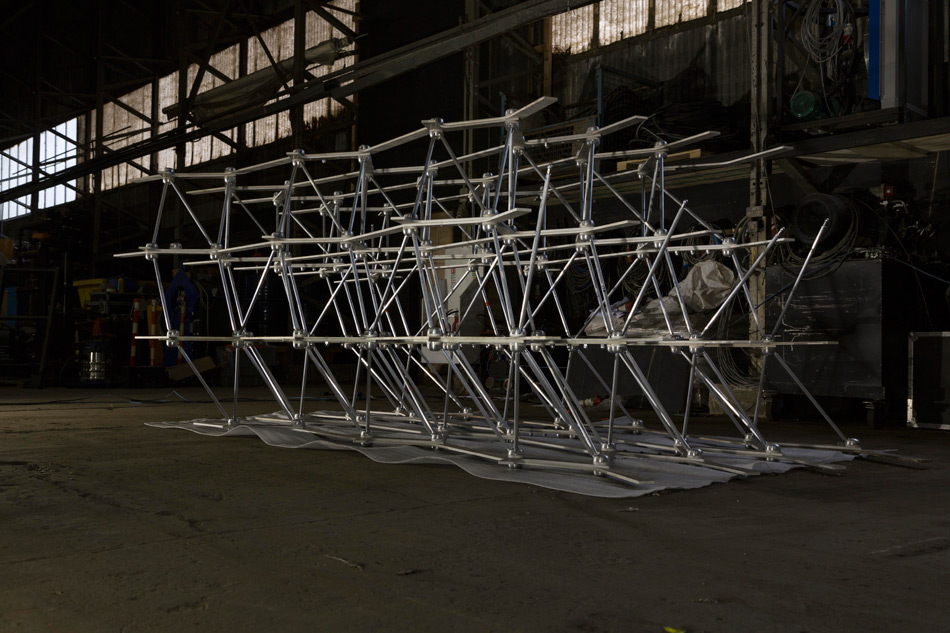 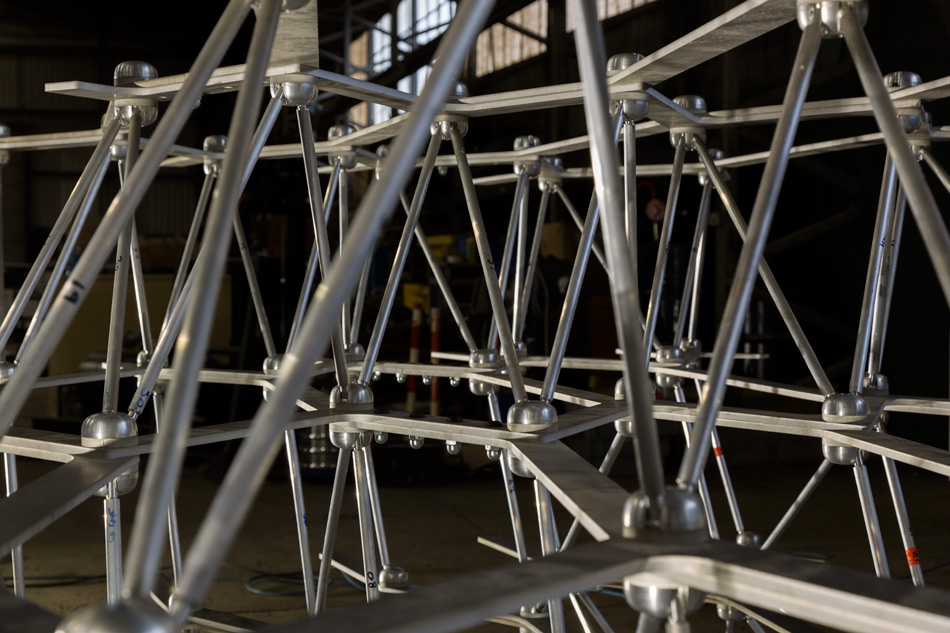 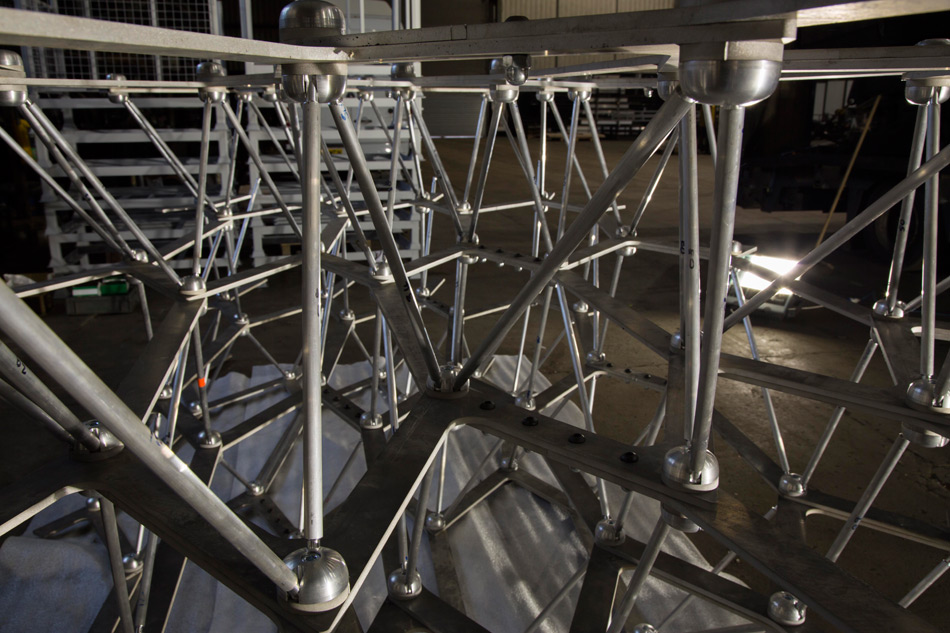 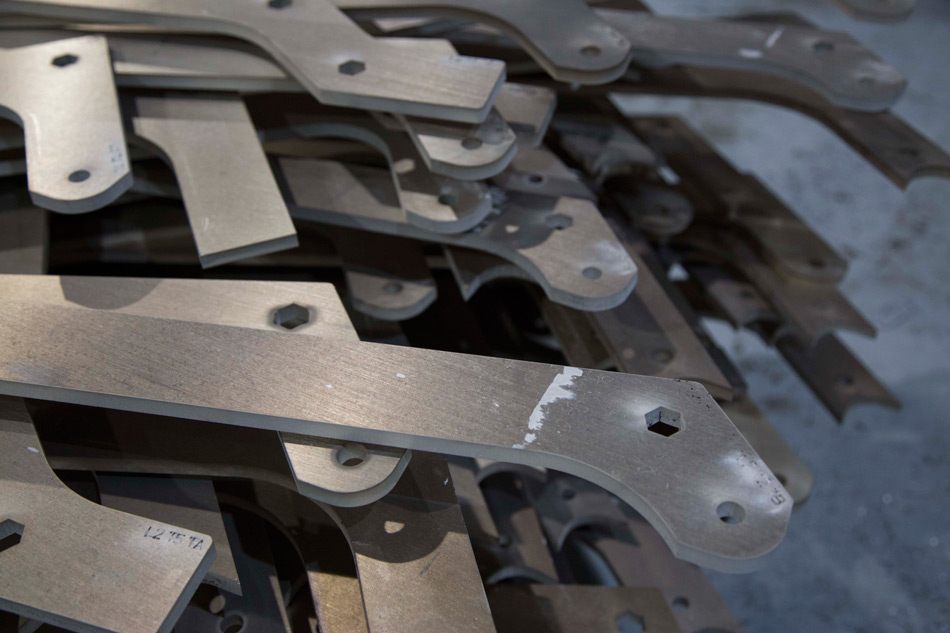 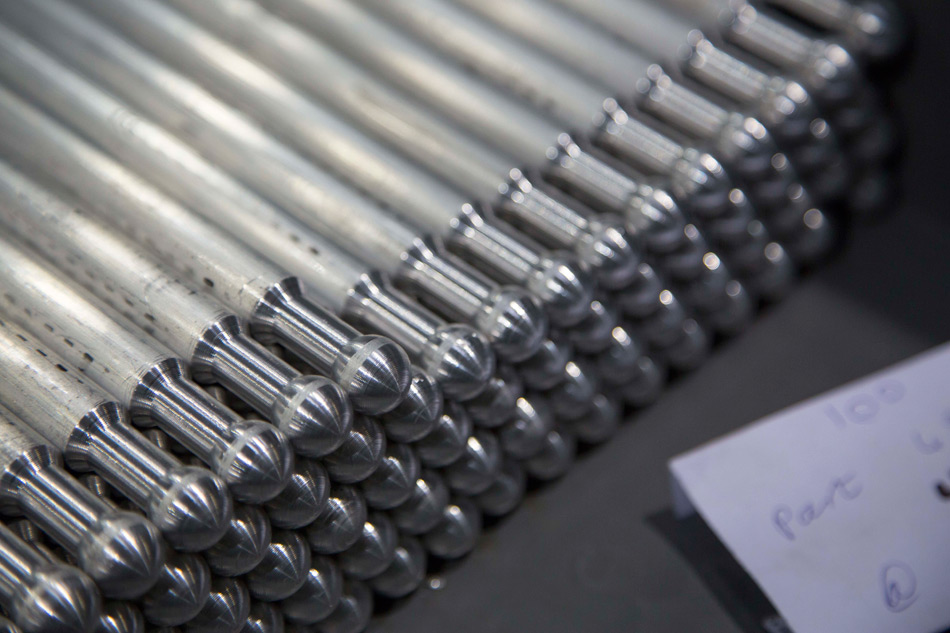 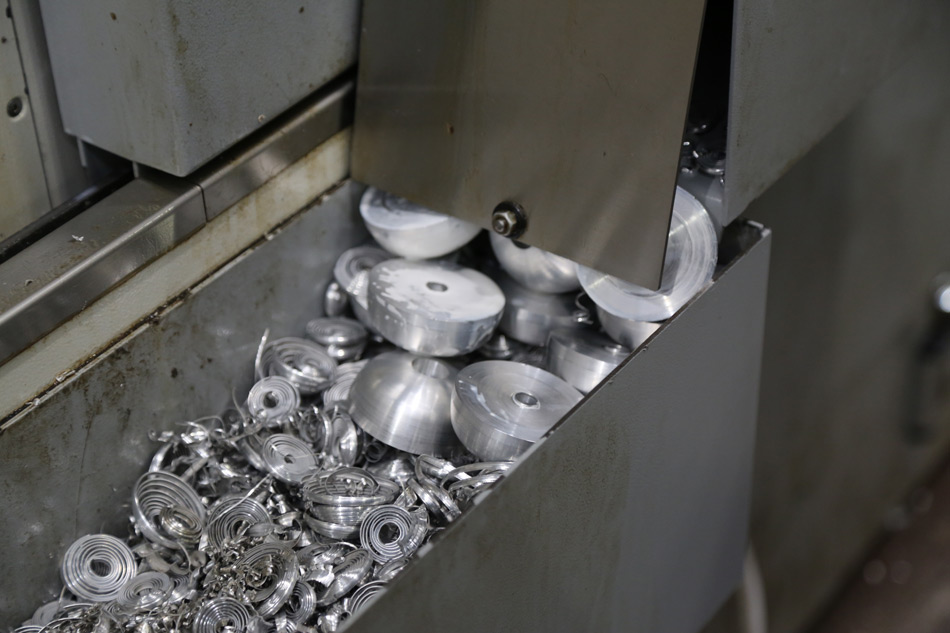 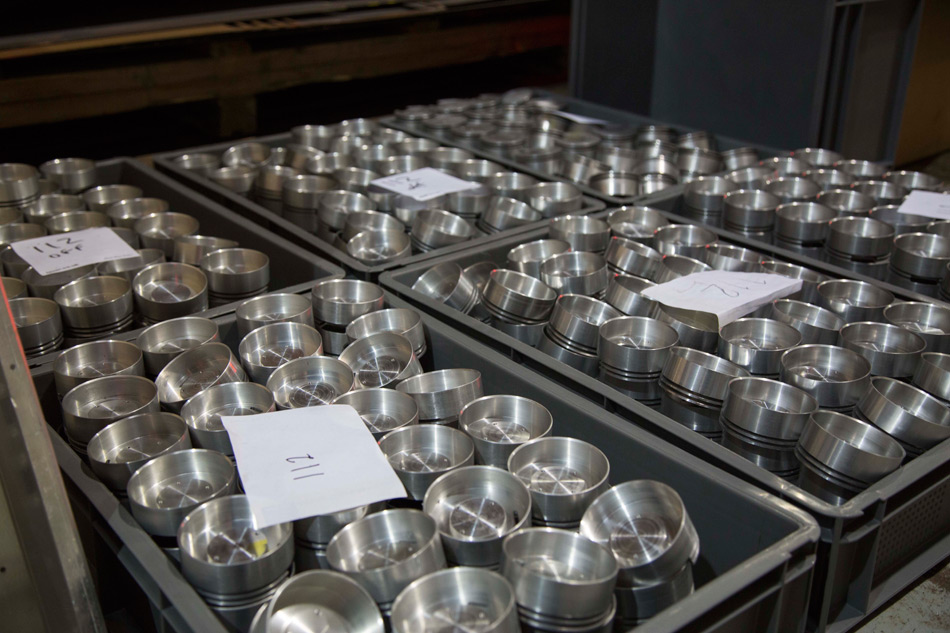 the UK participation and delivery of a stand-out pavilion at milan expo 2015 is being co-ordinated by UK trade and investment (UKTI) on behalf of the UK government. it has been designed by artist wolfgang buttress and will be developed and built with internationally-recognized UK construction expertise from stage one.