the young state of georgia in the caucasus has gone through considerable development in recent years, with growing numbers of tourists discovering the country which is rich with history. as a result, there has been an increasing demand for airlines to fly there. for its geographical advantages and close proximity to two of the eurasian country’s most important UNESCO monuments, its new parliamentary city kutaisi has been selected as the site for a new airport.

the design for the new transfer terminal and air traffic control tower for kutaisi airport has just been officially revealed by the president of georgia, mikheil saakashvili. conceived by dutch architecture firm UNStudio, it is set to serve domestic and global flights for use by international diplomats, national politicians and for tourism. the 4,000 m2 terminal building will house a number of program spaces including: arrival halls, a check-in area with lounge, café and car rental facilities; along with three gates for departure with retail, cafés, a CIP lounge area and exterior garden, an arrival area with customs and offices for the border police and an administration area with staff rooms and press conference facilities.

in georgia, public buildings and private houses employ their entrance lobbies as a means of showcasing their individual identities. through their design, UNstudio embraces this architectural concept as a means of manifesting the country’s young and dynamic democracy, along with its rapid development as a main crossing point in the region. 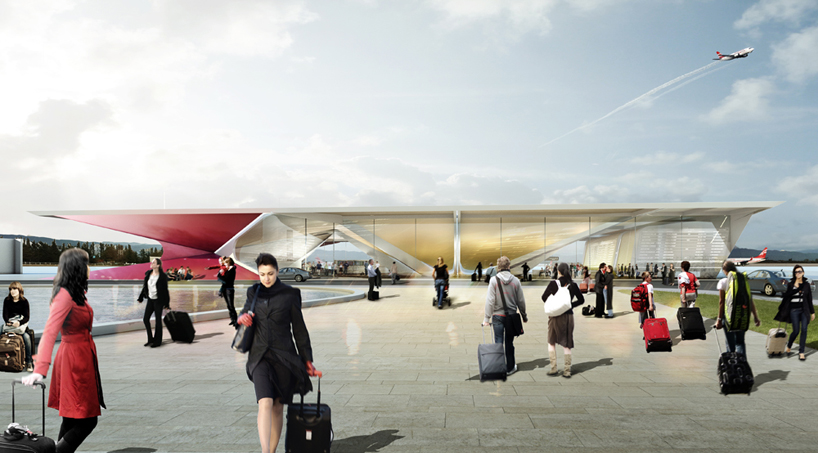 incorporating both georgia’s historic landscape and architecture into its design, the terminal refers to a pavilion, a gateway in which a clear structural layout creates an enveloping and protective volume structured around a central exterior space used by departing passengers. the transparent space around this central point is designed to ensure that the flows of passengers  are smooth and that the circulation of departures and arrivals do not coincide. the axes incorporate views from the plaza to the apron and beyond to the caucasus on the horizon.  the overall layout organizes the logistical processes, and provides optimal security and ensures that the travelling person has sufficient space to circulate comfortable. serving as a lobby to georgia, the terminal could also operate as an art gallery, displaying works by local artists, further presenting the identity of contemporary georgian culture.

the new airport aims to integrate both local and international elements of sustainability. an on-site underground source of natural water provides the basis for the reduction of energy consumption through concrete core activation. this water will be utilized in the floors of both the terminal and air traffic control tower, maintaining a regulated temperature in the two volumes. the cantilevered roofs of the terminal building provide sun shading on south and southwest zones. a hybrid low pressure ventilation system will be incorporated into the terminal’s main structure, as well as a grey water collection system located in the floor beneath. large areas of PV-cells on the roof’s surface may also be implemented to further reduce energy consumption. 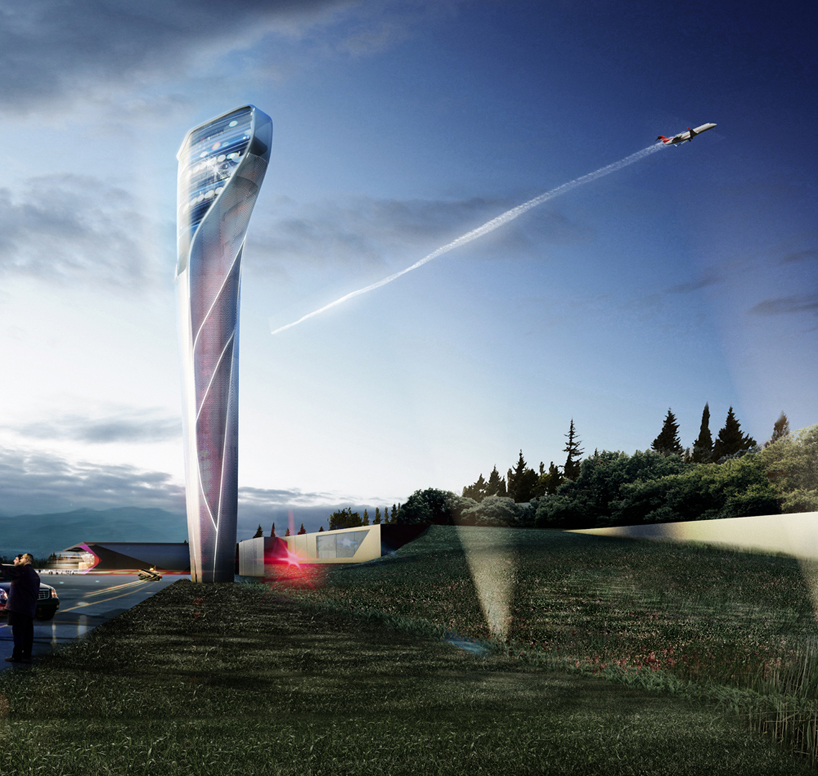 the air traffic control tower stands at 55 metres high, 300 m2 and has been designed to compliment the terminal. the traffic control cabin located on the top level of the structure, forms the focal point, offering a spacious and comfortable interior ensuring a workspace of optimal concentration. the tower’s exterior is clad with a transparent skin that has the potential to change color whenever there is a fluctuation in traffic. the centre will function as a light beacon to the sky for the airport, but also from the road to and from kutaisi. 1,500 m2 of supporting office spaces will be housed in a nearby building.

kutaisi airport will be georgia’s first to have a strict segregation of waste. the aim is to establish a recycling system which could be further implemented into new and existing projects in georgia. construction is set to begin in december 2011, and is scheduled for operation in september 2012.

‘the design for the new terminal in kutaisi focuses first and foremost on the experience of the traveller by creating an inviting, safe, transparent and user-friendly airport. the desire to provide for and communicate equally with both international visitors and the local community is paramount. it was particularly exciting for me to be able to design an airport which is not only linked to the new seat of parliament in kutaisi, but which also creates an entrance condition which functions as a port for the international community. the airport presents a symbolic infrastructural gateway to georgia and, from there, to the rest of the world. the design for the new airport embraces the traveller by embodying the circumstance of the site. moments of both leaving and returning are celebrated by the large span, open spaces and high ceiling of the terminal structure – reflecting the ways in which such gestures were employed in the great railway stations of the past.‘ – ben van berkel, UNstudio 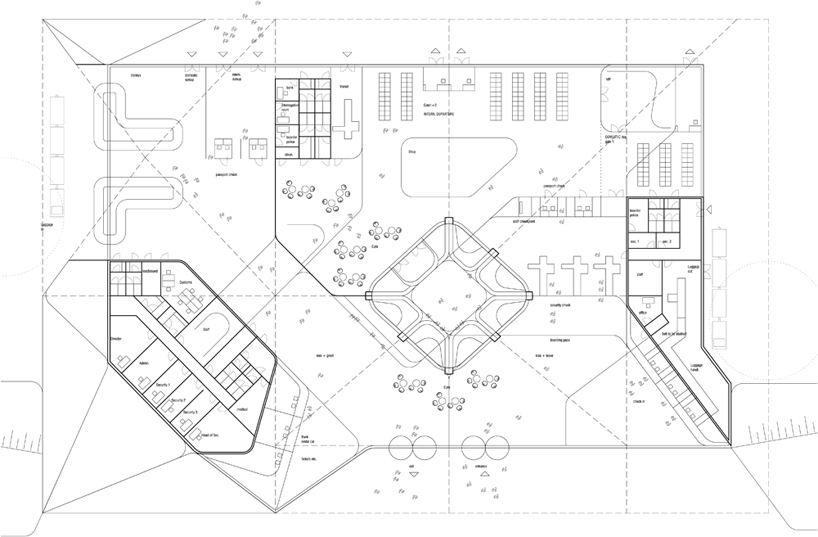 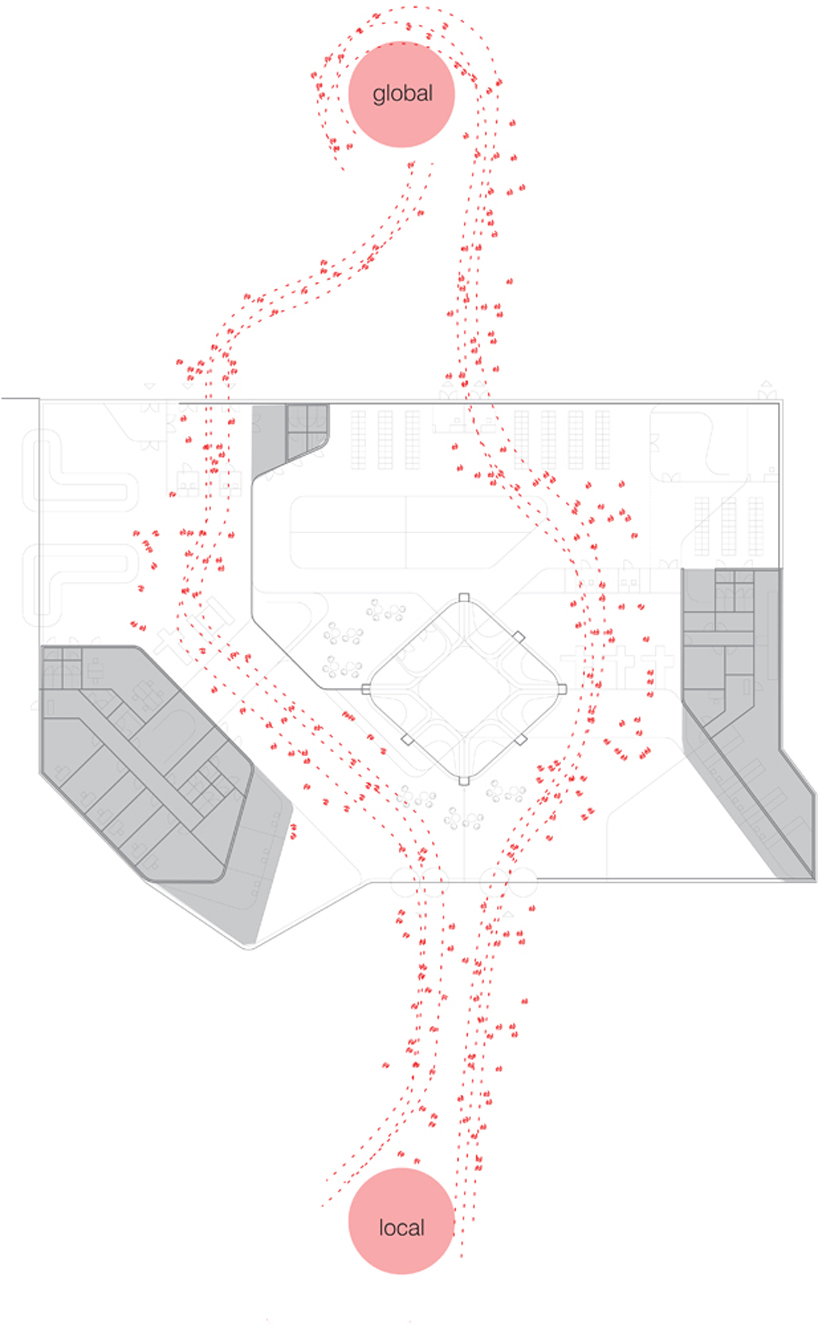 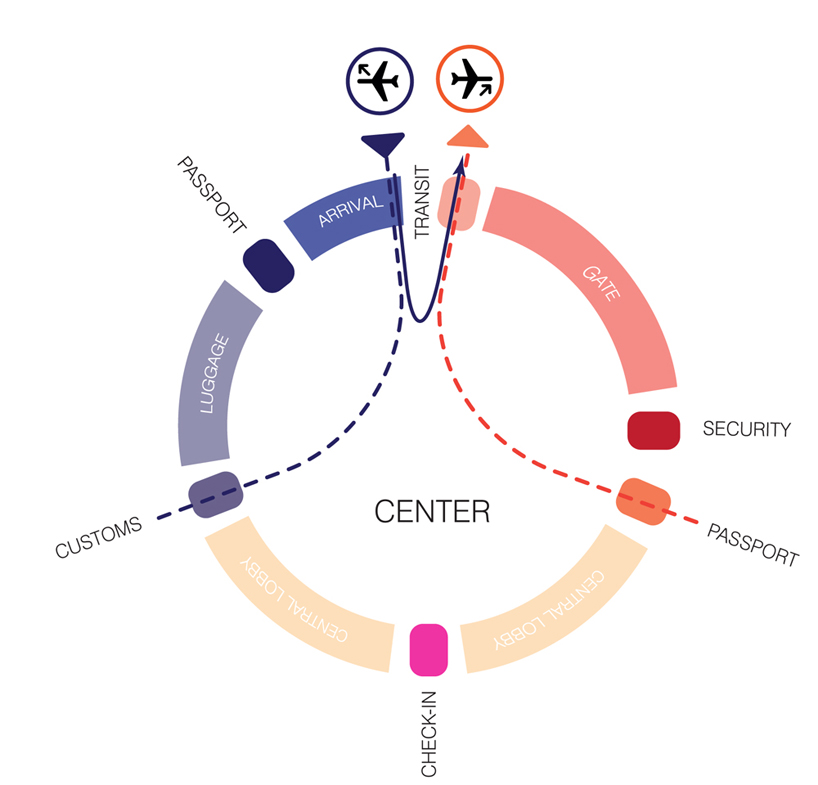 diagram of the program spaces