titled ‘spontaneous interventions: design actions for the common good,’ the united states pavilion at the 2012 venice architecture biennale is curated and commissioned by cathy lang ho with help from david van der leer and ned cramer. our economic situation is allowing a new found burst of creativity from the common citizen, shifting the role of the protagonist from the select few to the common masses. the installation investigates the future of the archetypal american city through a series of smaller-scale projects realized by individuals – rather than the economically capable elite – that intervene in the urban context.

sausalito-based design studio M-A-D has developed a graphic system of colors resembling a bar code, where the size of each strip represents the prevalence of a specific category in relation to the represented project: information (blue), accessbility (orange), community (pink), economy (light green), sustainability(dark green) and pleasure (blue). printed on suspended banners from an open scaffolding developed by freecell, each of the 124 projects hangs from a cable in an almost festival-like atmosphere where visitors can pull them down for a closer inspection, while a black square acting as a counterweight along the wall suggests a solution to the problem. every banner showcases an urban intervention which could range from guerrilla pathways to larger structures, all realized by the public on either a paid or volunteer basis. the projects address a range of issues, from functional improvements to existing infrastructure to the creation of new structures, all modifying space within diverse urban fabrics. 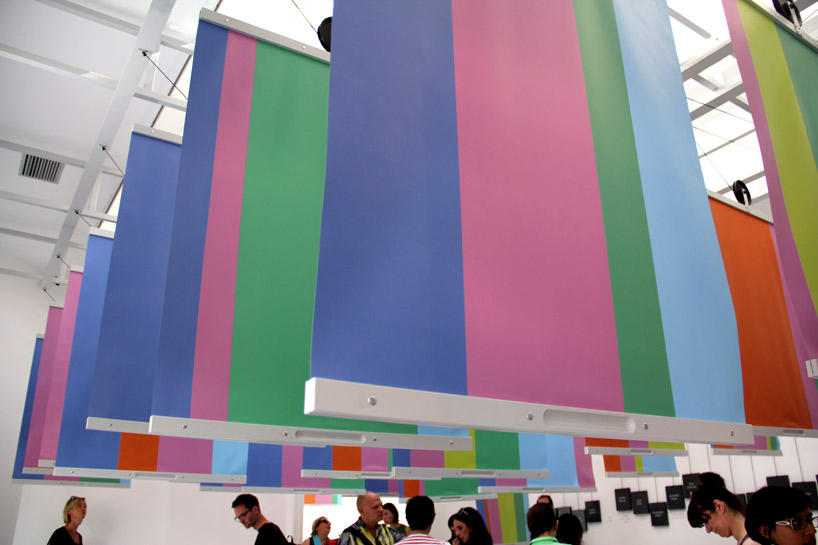 freecell created a lively system of banners suspended from an open scaffold, evoking a festival atmosphere. the banners may be pulled down for a clos- er look, triggering the movement of counterweights that are in- scribed with suggested actions to solve urban problems. image © designboom

an integrated infographic diragram on the floor, also developed by M-A-D, provides a historical timeline of the american city and urban activism, while a video directed by kelly lourdenberg shows a series of clips featuring participants sharing their hopes and dreams for the future of the city, asked to speak as if they were running for an election.

the entrance courtyard or ‘commonplace’ designed by  new york studio interboro borrowed from the venetian elevated sidewalks to design the meeting and workshop space, with a collection of portable blocks that can be arranged into any configuration. 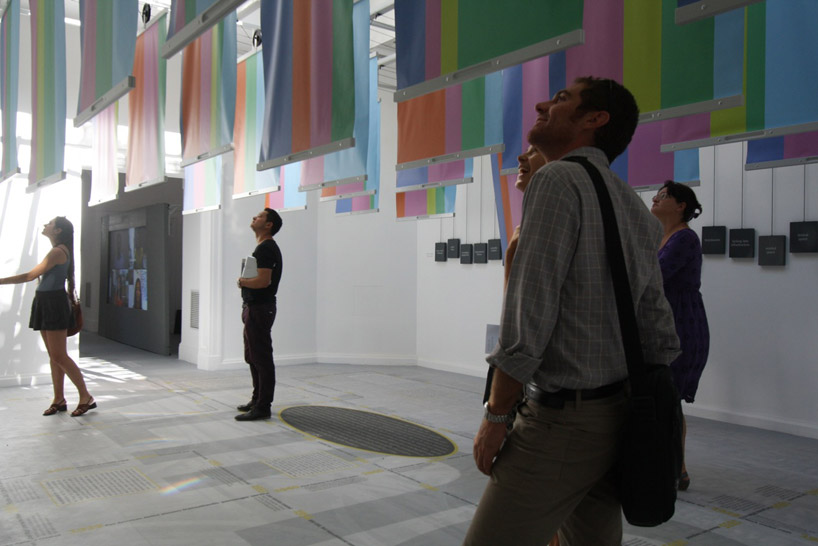 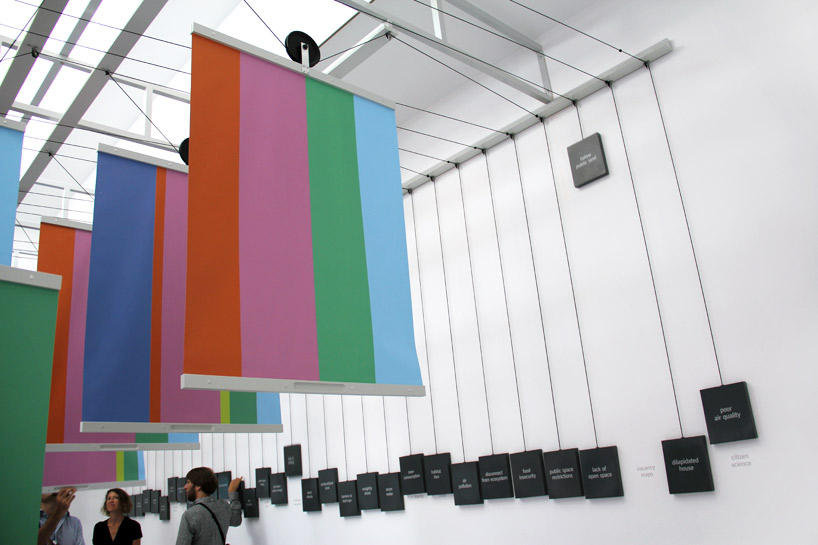 banners are connected to counterweights through a pully system image © designboom 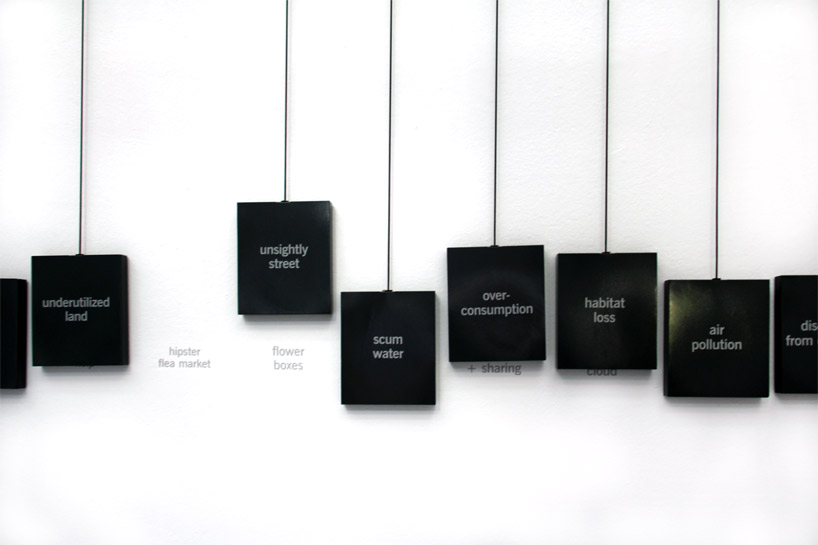 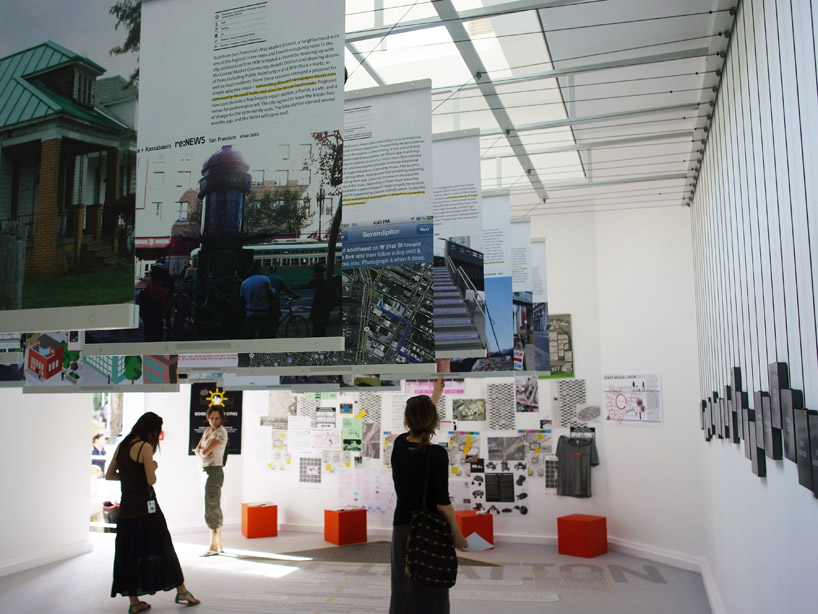 ‘in researching projects for the exhibition, we found hundreds of examples even before we issued an open call in january, which itself yielded over 450 compelling self-initiated urban improvements. we narrowed our choice to 124—the maximum number we could fit in the 4,000-square-foot permanent american pavilion in the giardini, the public gardens of venice—though we wish we could have included many more. we were expansive in our consideration of what qualifies as a ‘spontaneous intervention’, including projects that encroach on the territory of art and graffiti, well aware that some acts are more about self-expression than tactics for long-term change. our goal was to find a diversity of original projects that transform public urban space to better serve the common good, seeking those that would add up to a useful archive of actionable strategies that could be replicated in other cities facing similar problems.’ 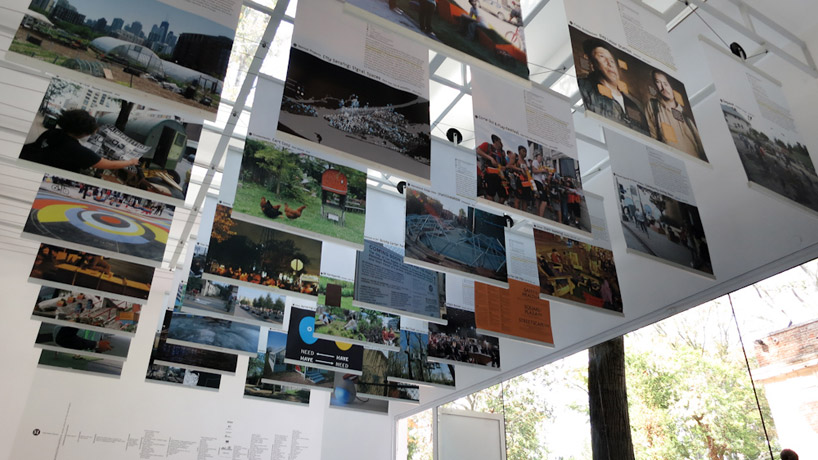 ‘the notion of the “common good” is mutable and subjective, to be sure—what’s good for some might not be for others—but in selecting projects we adhered to the idea of what is beneficial to the most people with respect to everyday needs. new bike lanes in NYC might irk drivers; guerrilla gardeners might be annoying squatters to property owners; culture-jamming billboard pranks might be classifiable as vandalism; and all of these acts might be gentrification by another name. but we believe that the positive impacts of our featured examples of hands-on city-making far outweigh the negative.’ 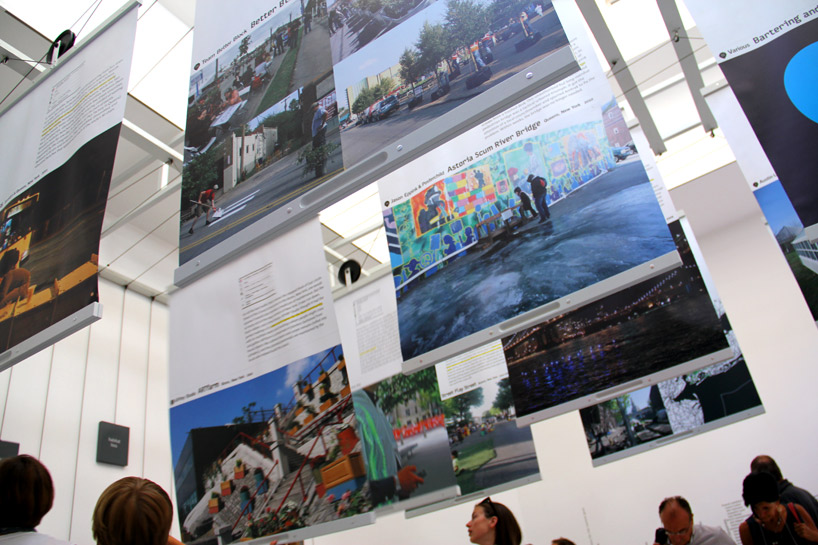 ‘more appropriate than considering these works with respect to how they address the “common good” is how they address the “commons,” the space and resources we share, harkening to the originary political conception of the “common wealth,” or public wealth, and how it should be administered. the commons have been under assault for centuries, but intensely so since the dawn of industrialism with the extreme privatization and pillaging of land and natural resources combined with the sad mismanagement by our entrusted public entities of our public spaces, parks, infrastructure, schools, and other shared assets. the word “commons” suggests medieval laws involving free-grazing animals and the right to forage in forests, but we can’t forget that it remains central to our everyday lives, from the water running through our taps to the streets that get us where we need to go. with the commons so threatened, so in disrepair, is it any wonder that “commoners” feel compelled to step in? spontaneous interventions embody innumerable ways of rethinking our collective well-being, both physical and emotional.’

commissioner and curator cathy lang ho is an independent architecture critic and editor based in NY. she is a contributing editor to architect magazine and founding editor-in-chief of the architect’s newspaper. she has published hundreds of articles in publications worldwide, and is a board member of the institute for urban design. 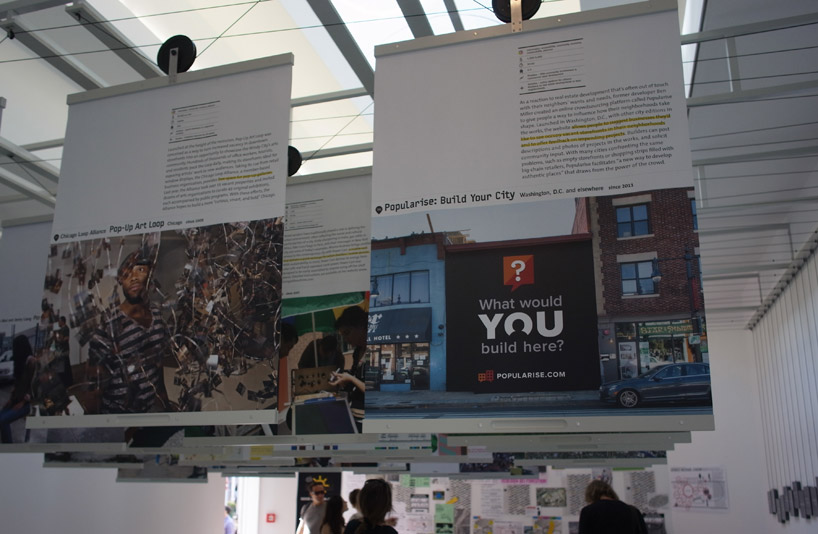 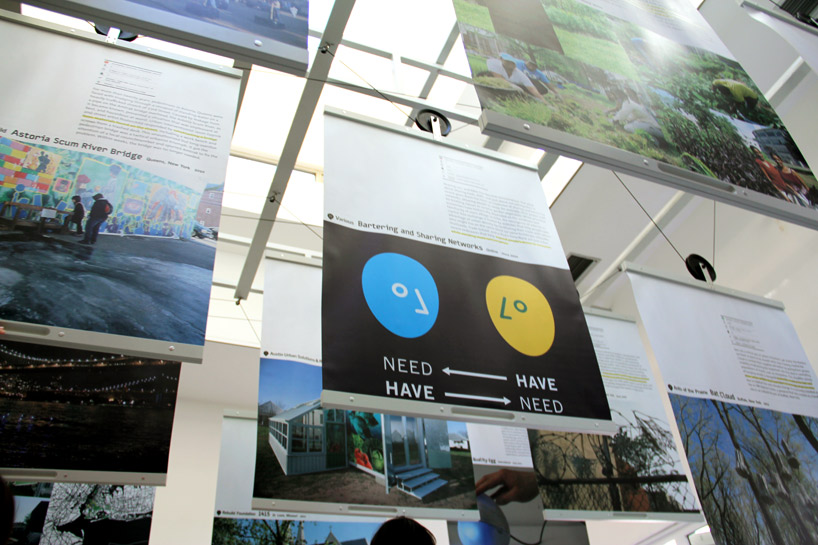 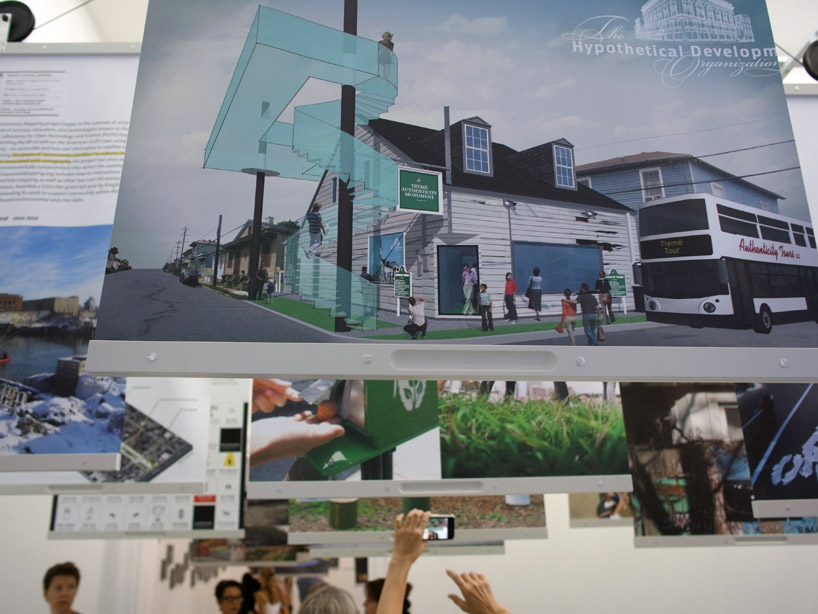 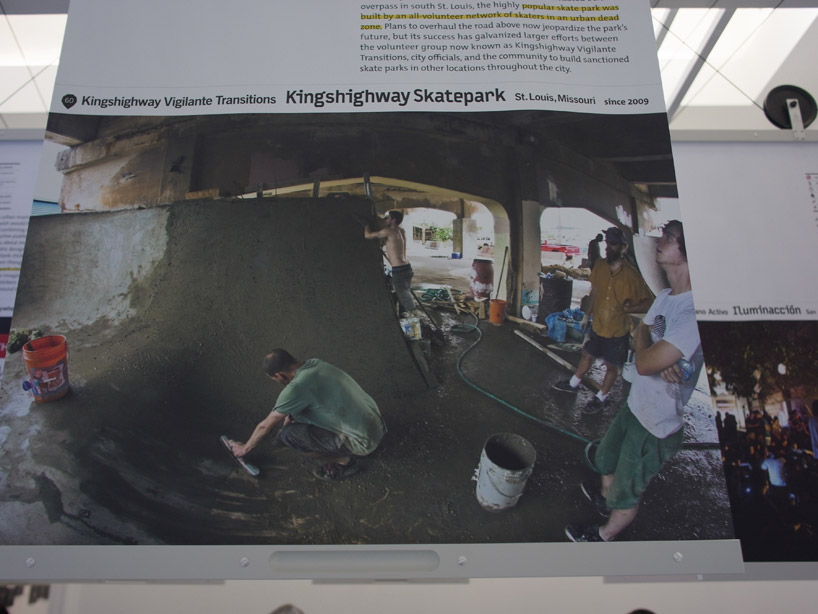 detail of a project on a banner image © designboom 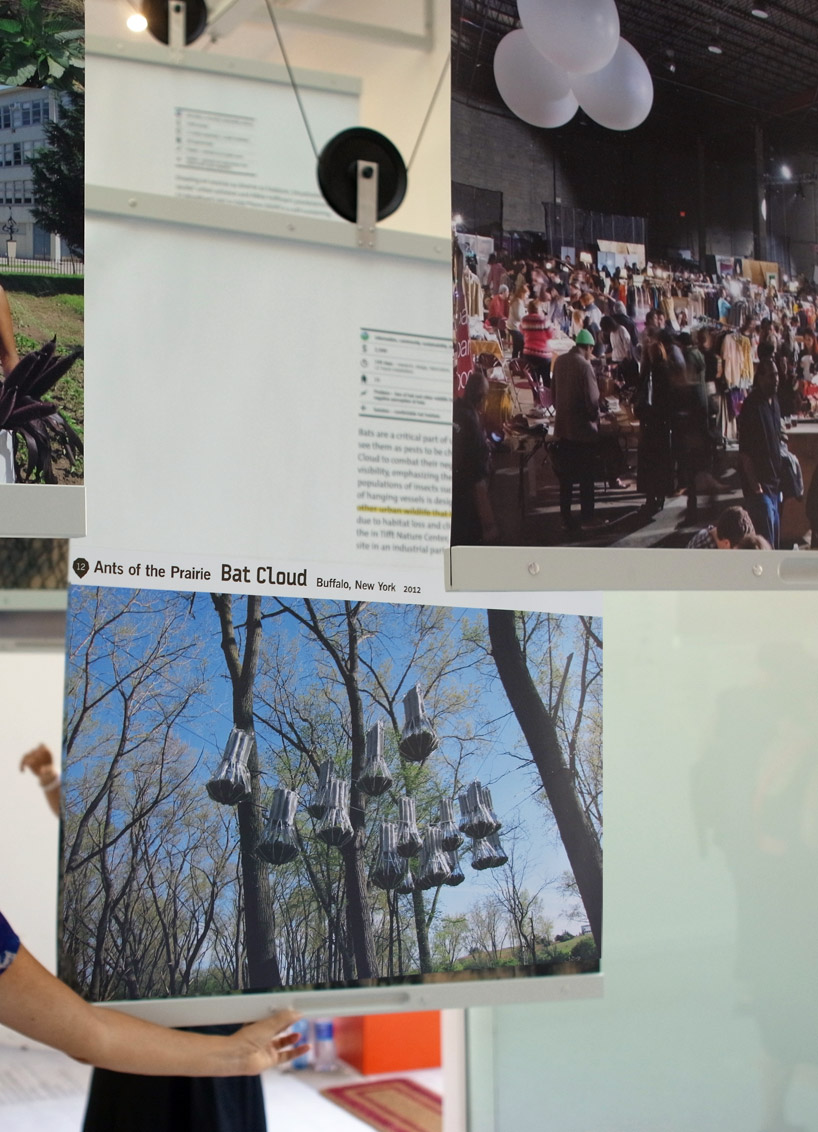 individual panels can be pulled down for further inspection image © designboom 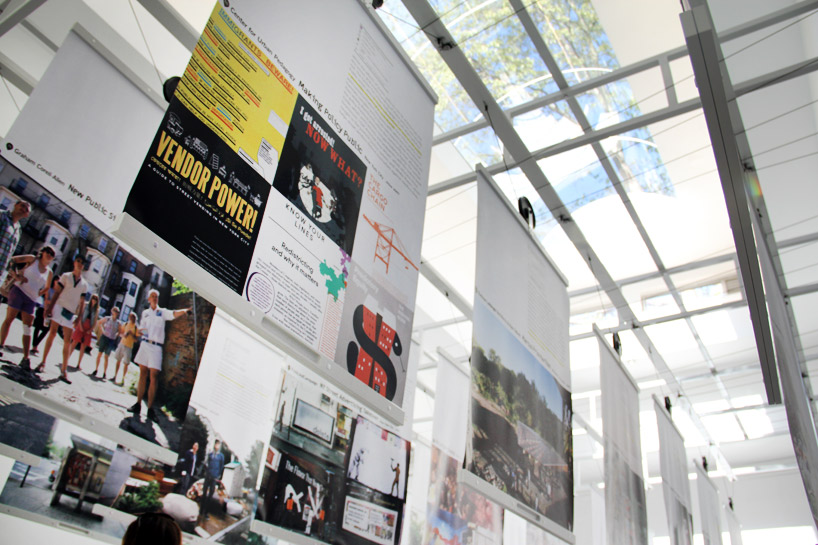 back of banners image © designboom 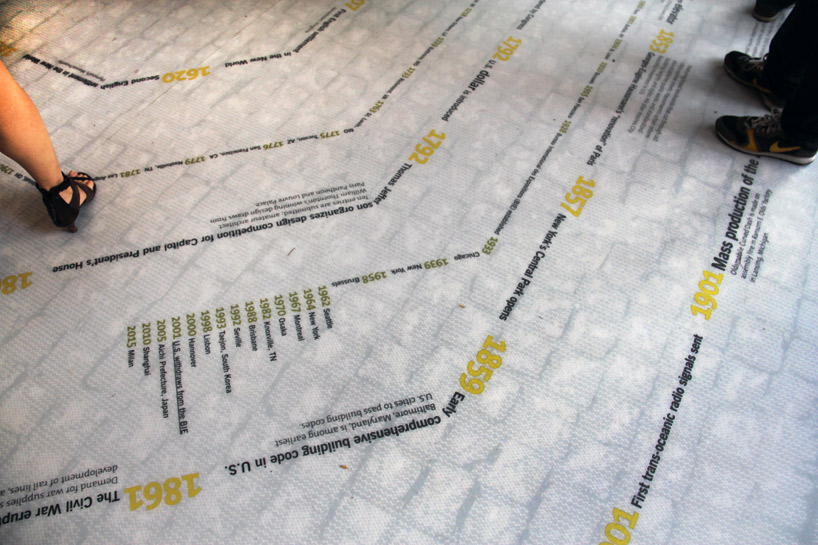 wending across the gallery floors is a timeline that narrates the history of city- making as well as key precedents in urban activism. M-A-D designed a timeline that alters in shape as it advances, reflecting the ideas of each dominant epoch. today’s urban interventions are reacting to spe- cific conditions that have been de- cades, even centuries, in the mak- ing, informed by complex physical and cultural circumstances. image © designboom 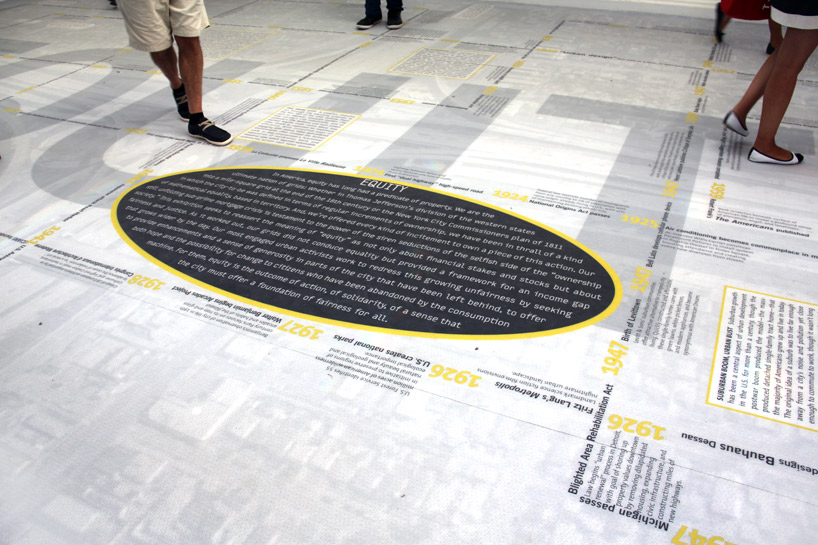 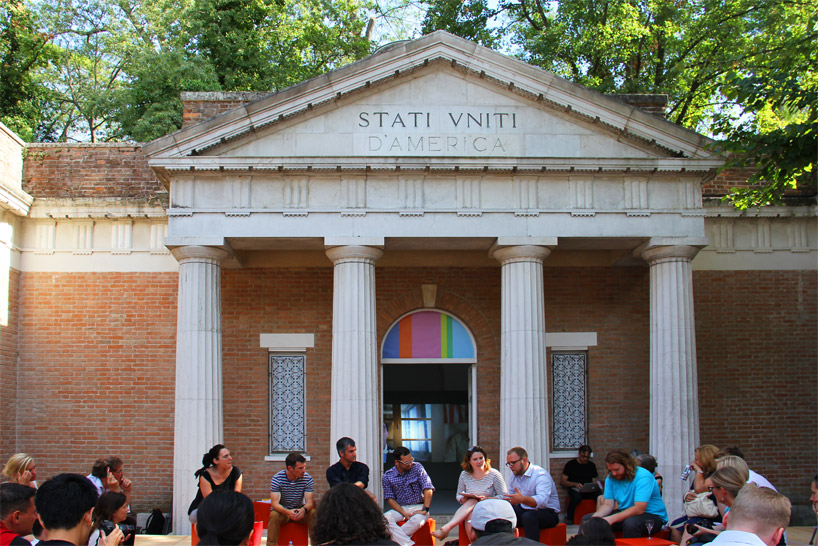 ‘commonplace’, features a conversation pit that is filled with foam cubes in- tended to be used for seating or playing. the pieces are configured to accommodate a range of functions, from lectures to workshops to casual socializing. their intention is to donate the cubes to a school when the biennale concludes. image © designboom 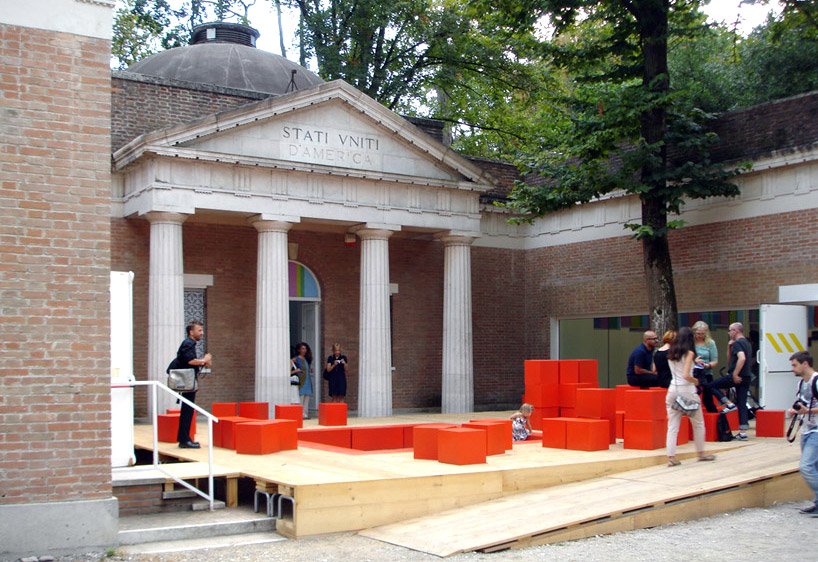 interboro borrowed a standard-issue item from the city of venice – the temporary, elevated sidewalks called passerelle that venetians use to navigate venice during acqua alta  – to create an ‘outdoor living room / commonplace’ to host programs scheduled for the biennale’s three-month run. image © designboom