for USA’s contribution to the upcoming expo milan 2015, new york-based biber architects have designed an open and easily accessible pavilion titled, ‘american food 2.0, united to feed the planet.’ the structure is conceived as a large elongated barn, composed two levels as well as a wide roof deck. visitors circulate through a series of exhibitions, which raise issues and facilitate discussion regarding america’s role in the global food system. responding to the expo’s overall theme of ‘feeding the planet, energy for life,’ the pavilion’s displayed content contributes to overall questions relating to the challenge of ‘feeding 9 billion people nutritiously by 2050.’

one of the building’s elongated façades is covered by a ‘harvestable vertical farm,’ containing plants from each of the country’s 50 states. the system operates with hydroponic irrigation, which is integrated with a rainwater catchment scheme. to maximize production, technology is utilized to allow each of the garden panels to rotate to track the sun’s movement. additionally, the living wall is envisioned as a backdrop for a ‘harvest ballet,’ with aerial performers suspended on ropes from above. 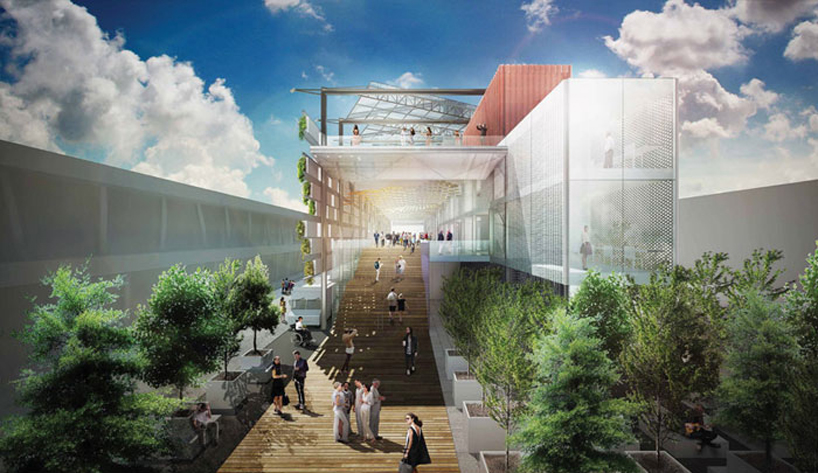 the exhibitions’ arrangement is organized by a central boardwalk

the structure’s open nature responds to the ‘closed box architecture’ of recent expos, and in particular USA’s pavilion at the shanghai expo in 2010. visitors approach the main entrance, featuring a large airplane hangar-sized door, along a wide boardwalk, which as a built landscape is distinctly symbolic of to american food culture. a rooftop terrace above will feature a glass canopy, able to be dimmed for shading value, with photovoltaic panels integrated for generating energy. offering views outward, the space will be host to nightly parties. 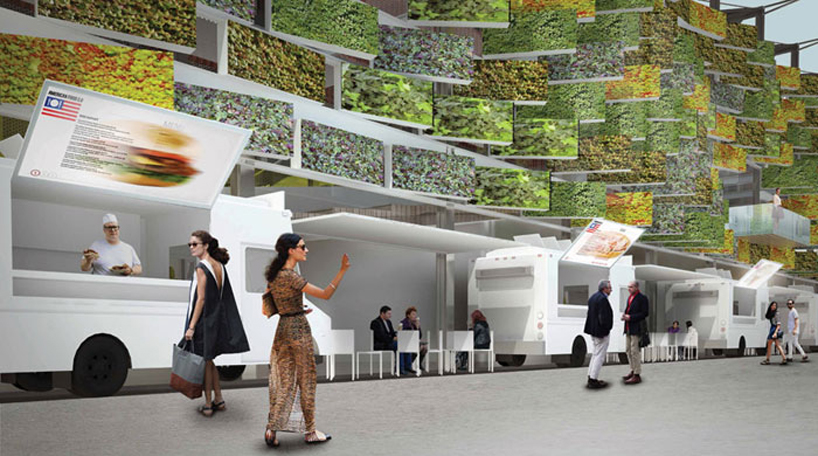 the pavilion’s surrounding landscape is occupied by various american mobile eateries. in cooperation with this feature, a series of programs will be held titled, ‘food truck nation,’ highlighting the country’s abundant street food culture while referencing ‘the nation’s diversity, entrepreneurial spirit, and fascination with the road.’

to describe the pavilion’s design, the architecture office’s founding principal, james biber, states, ‘the pavilion itself is a scaffolding for ideas, a rethinking of the nature of the expo pavilion and of america as a force in the food world.’ 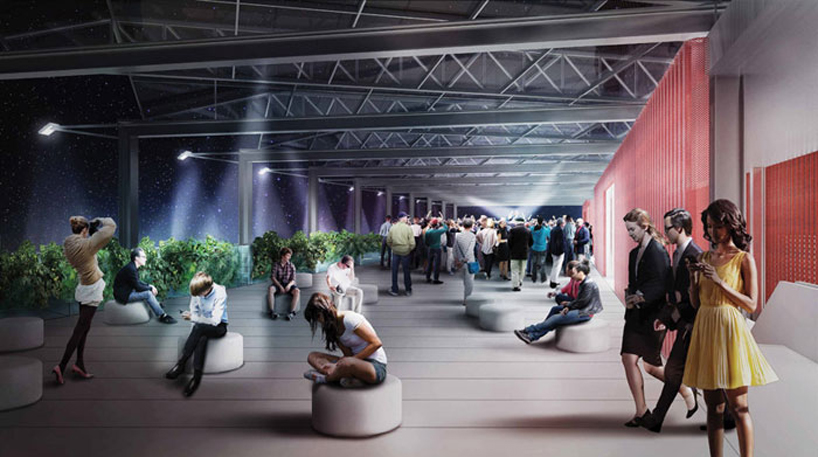 ‘american food 2.0’ is organized by friends of the USA pavilion milano 2015, which is comprised of a collaboration between the james beard foundation and the international culinary center, and also in association with the american chamber of commerce in italy.