‘valdrade’ skyscraper aims to tackle the problem of monofunctional densities in manhattan by redefining the city’s space based on 3 interdependent venues: density, sustainabilty and diversity. it seeks to reconsider the city as a true ecosystem that is able to manage itself through self-sufficiency and self-generation. 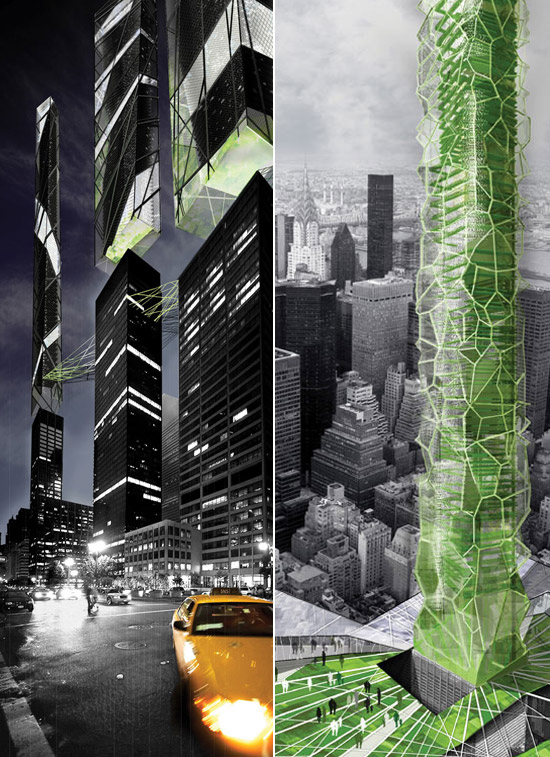 the design is arranged so that lower part of city consumes, while the upper part of the city produces energy via plug-ins of self sufficiency generators. currently, infrastructures are off-shored in suburban areas, adding to the problem of urban sprawl and high energy expenditures. however, the plug-in system would create positive energy poles to compensate for the over-consumption of energy amongst the community buildings. in doing so, power is recycled in such a way that one person’s waste becomes the raw materials and a source of energy for another.

the self-sufficiency generators are composed of a photovoltaic skins and wind turbines for energy production. it also houses an area for lagooning which is a waste water purification process, a recycling area for the organic and paper wastes, a space for the production of recycled paper and compost.

meanwhile, the proposed skyscraper also introduces diversity to the city of manhattan through a couple of venues. here housing units assimilates and reflects the lifestyle of the user.  standardization and mass production disappear in favour of individualism and personalization. housing also helps add to the city’s sustainability by reducing traffic, and consuming little energy thanks to its smart double skin. in the second step towards diversity, the design features a ‘building reflect’, whereby the lower city works when the upper city dwells. by reflecting the lower city, the new tower adopts a multitude of outlines and offers in this way a variety of spatial typologies. 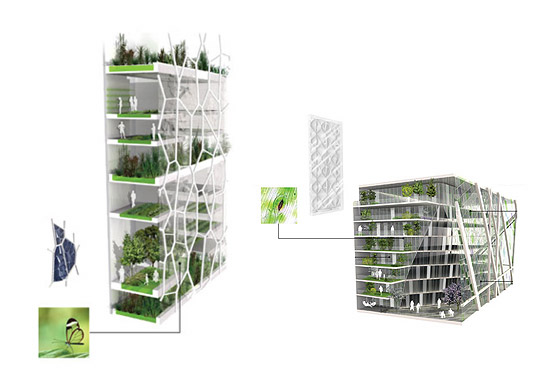 double smart skins made from facets

the facades of the skyscraper are made up of double smart skins composed from facets which react with their exterior environment. each of these facet draws from an element in nature, appropriating their functions to fit the uses and aims of the skin.

for instance, the housing units found within the skyscraper feature type 3 facets which are designed after stomata, a pore found in the epidermis of plants capable of using carbon dioxide in the air for photosynthesis and respiration. similar to stomata, inhabitants are able to ventilate their own spaces via a flexible airways which goes through the skin of the housing towards the patio. meanwhile, the veined structure of the skyscraper draws from the technology of butterfly wings, which are usually covered by colored flakes containing a network of nevures that forms an alveolar structure. these flakes have several roles of which the one is store solar energy.similarly, the faucet 5 walls of the skyscraper are subdivided in photovoltaic facets following the trajectory of the sun. 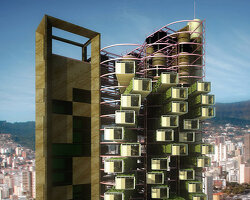