as part of an initiative led by vanke to recapture the history of shenzhen, various associates has completed this renovation project in the city’s nantou ancient town. the recently completed gallery, called ‘urban memory exhibition hall’, respects the existing site and traces the origin of the city’s culture, all the while trying to inject new life into the space via adaptive regeneration strategies. 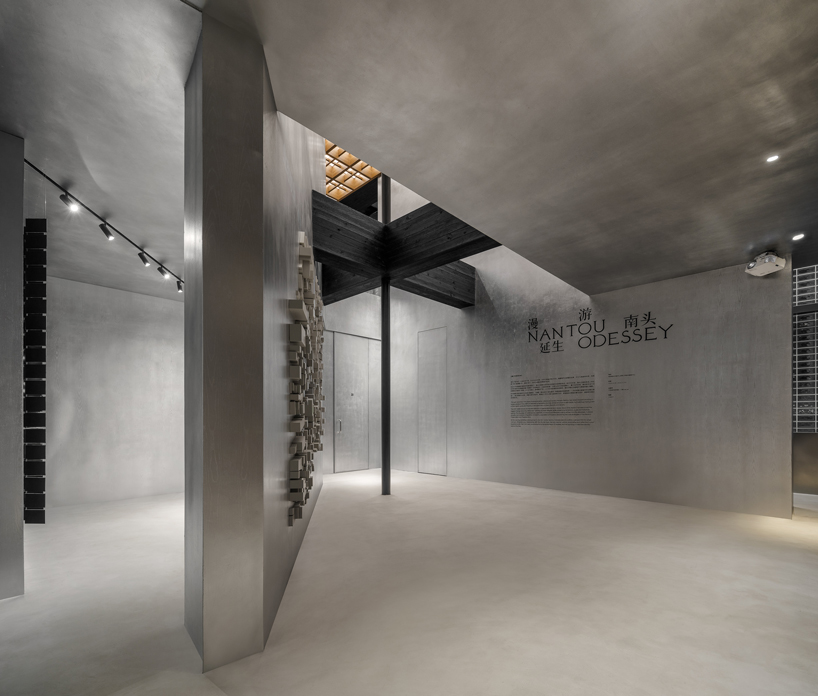 the building consists of three connected but irregular historical blocks, which feature many beams and together make up an irregular plane. due to time limitations and security considerations, the position of the stairs and beams could not be adjusted. the final gallery functions as a comprehensive service center, and also as an information center that exhibits the renovation and changes of nantou ancient town. within 2961ft2 (250m2), it accommodates a variety of functional spaces including a reception area, depository area, office, washrooms, meeting room, shared coffee area and exhibition space. 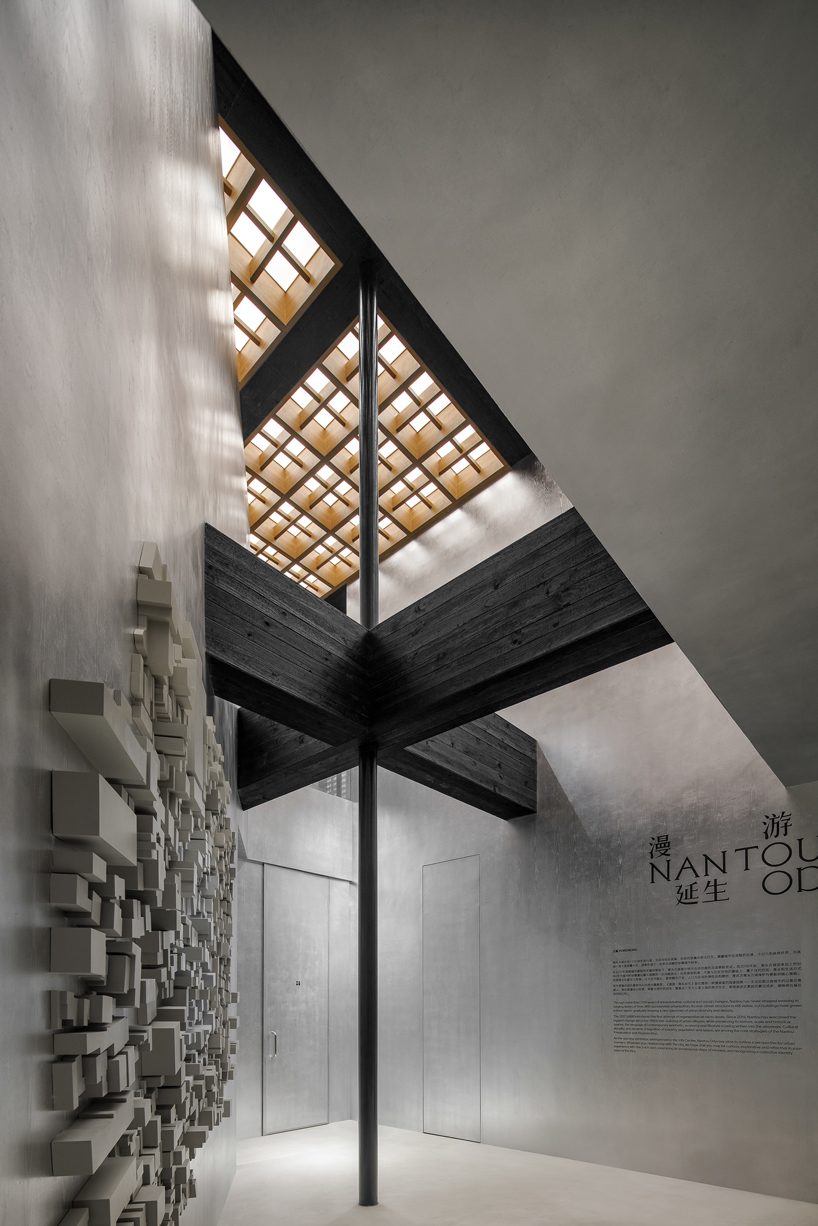 various associates considered how to connect the two floors and how to endow the space with a distinct identity while maintaining a low profile yet modern, chinese-style ambience. drawing inspiration from verandas in traditional lingnan architecture and gardens, the design team created a zigzag corridor to connect the volumes and produce an endless realm within the enclosed space. the corridor also serves for rest and display, which is consistent with functions of the entire space.

a full-height inclined wall is inserted into the fixed plane, in order to create a unique sense of space. this slanting wall also helps to shape a triangular double-height atrium, which links up the two floors while forming a fun visiting circulation route. the design team retained the original structural beams in the middle of the atrium, and endowed them with unique natural rustic textures of charred wood. the beams, together with the orderly wooden ceiling grid, generate a chinese yet modern aesthetic. 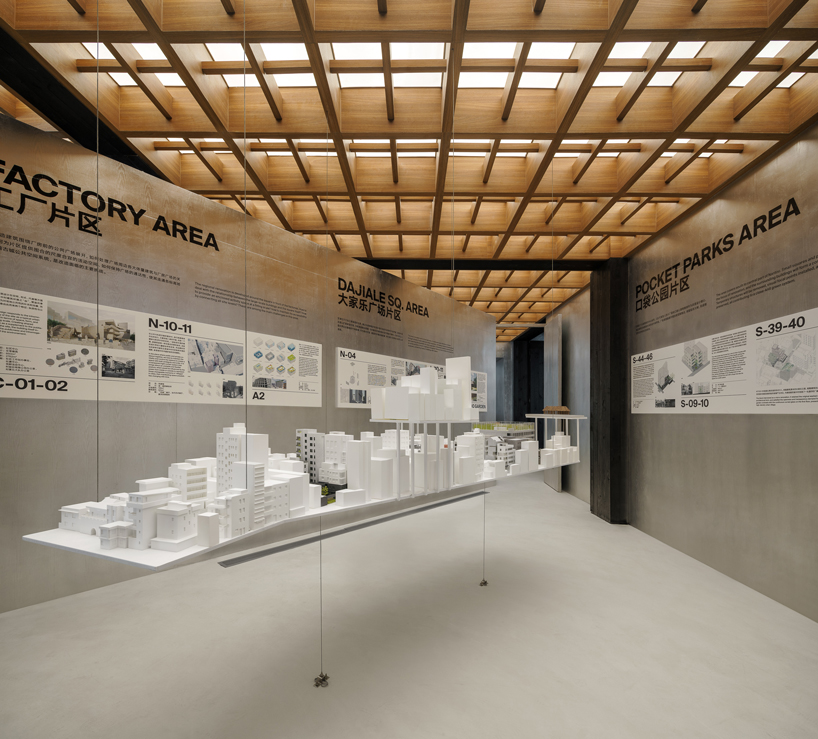 the material palette of the interior space mainly consists of gray brick, teak and charred wood – two typical materials from traditional chinese architecture.
the traditional material silver foil was not applied to large areas of the space. instead, it was attached to wooden veneers to form an updated version of ‘silver foil’ that features wood grain. it neutralizes the sense of solemnity and rationality generated by charred wood and the orderly matrix of the ceiling, while also adding a soft and warm touch to the entire space. 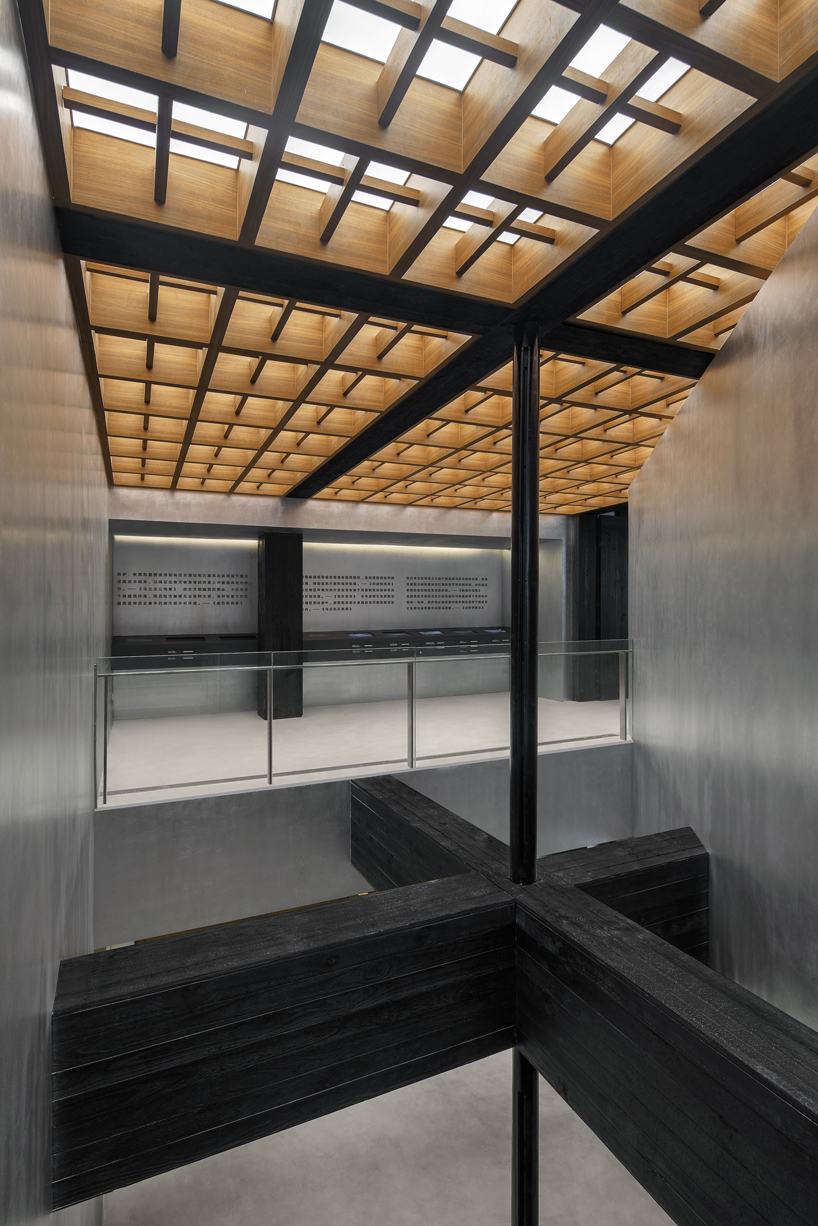 parts of interior surfaces are composed of translucent glass bricks, which reveal outdoor hues indistinctly and help unify the spatial languages via the rational cross patterns. functional spaces for shared coffee, exhibition, leisure and meeting are orderly configured and linked up by corridors and passages. matrix-featured spatial order is interpenetrated and combined, and the wooden grille skylight echoes the form of atrium. in addition, the cross-shaped structures and the slanting wall break the overall restrained spatial tone via the asymmetrical arrangement, which resonates with the freely extending street-and-lane-style layout of this space — a mixture of village and city. 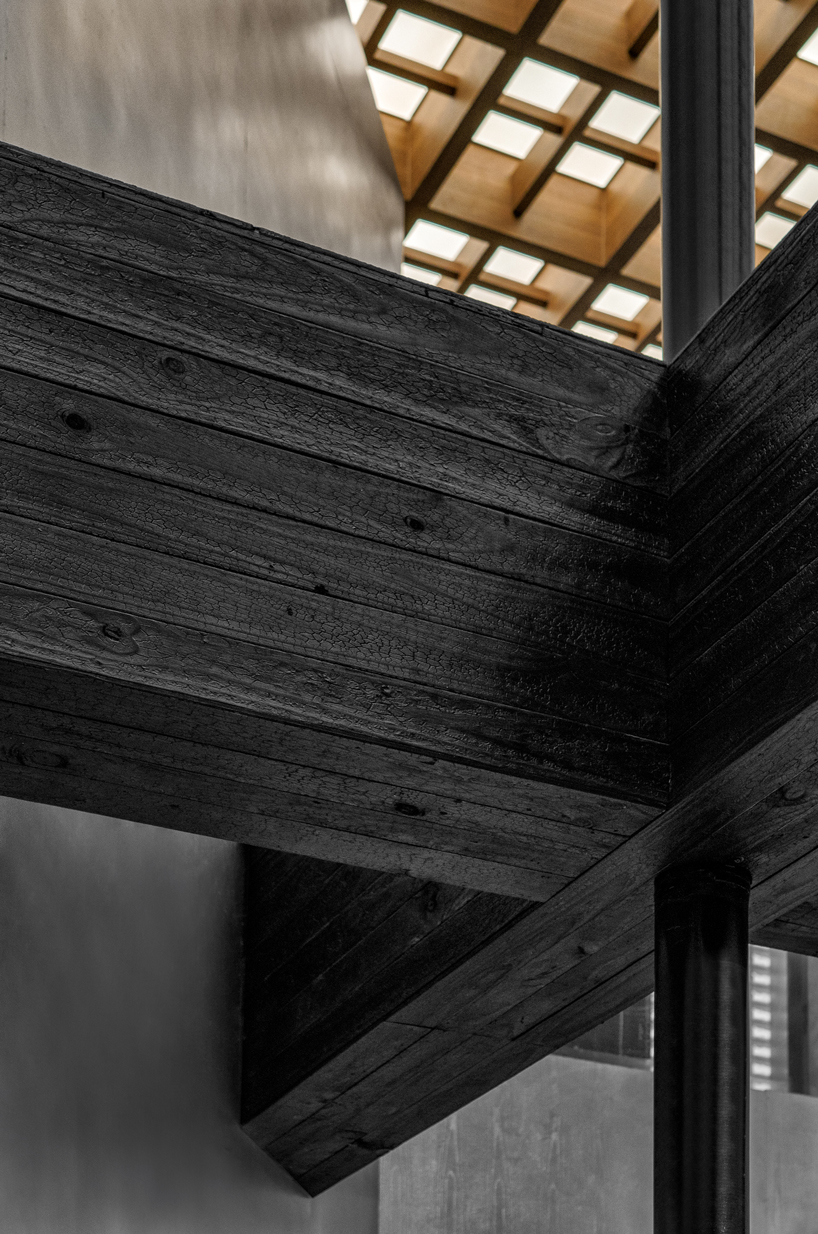 various associates enriched the circulation routes through structural interventions, endowing the project with its own identity via materials and details, and paid attention to cultural context and demands behind the project as always. the studio sees the renovation of nantou ancient town as an attempt to activate the community based on contemporary context, and to transform local culture for more than a thousand years into a popular upgraded landmark. in this project, one of the key points that the design team focused on was to update the ‘sense of age’ and ‘simple image’ of traditional materials by design approaches. as the studio always tries to bring forth the new through the old, and seeks for modern expression of the traditional. 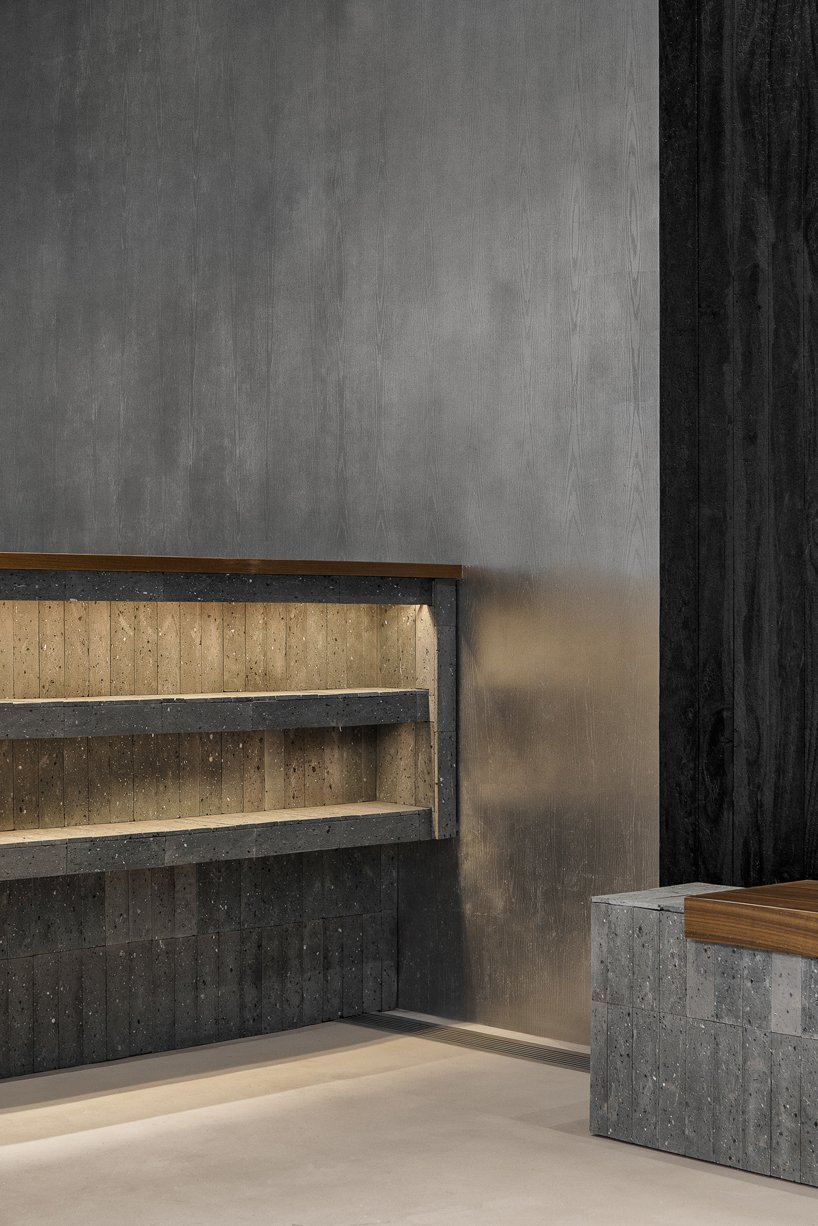 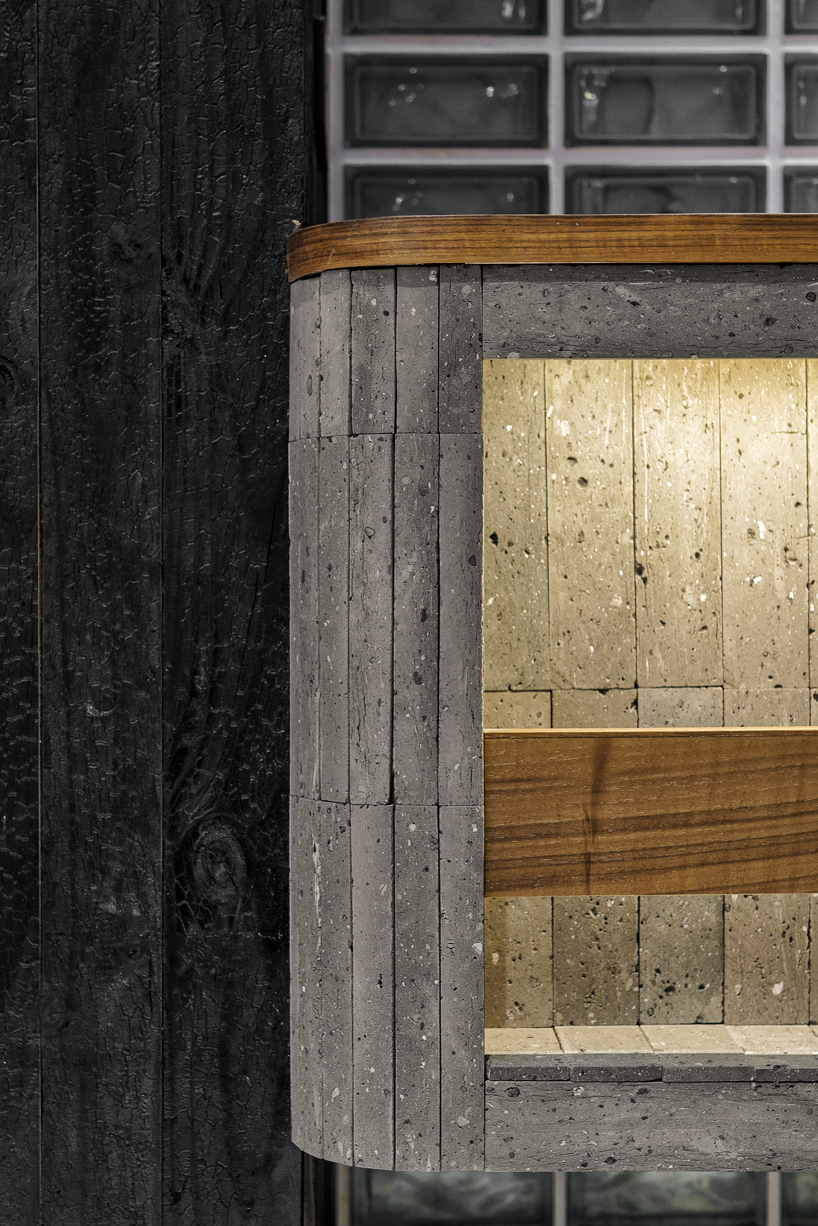 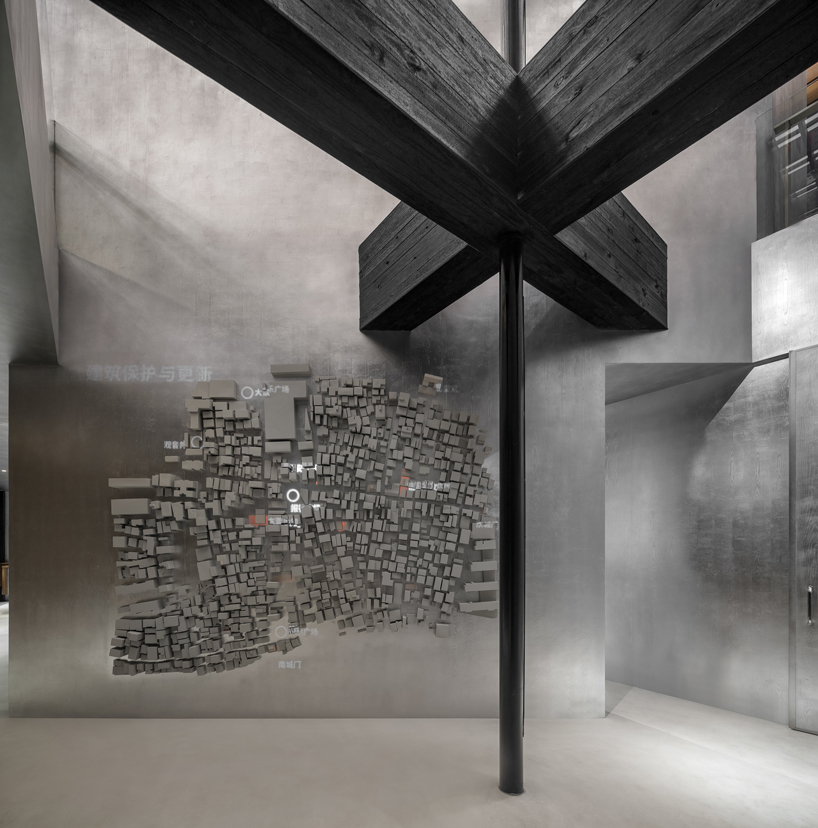 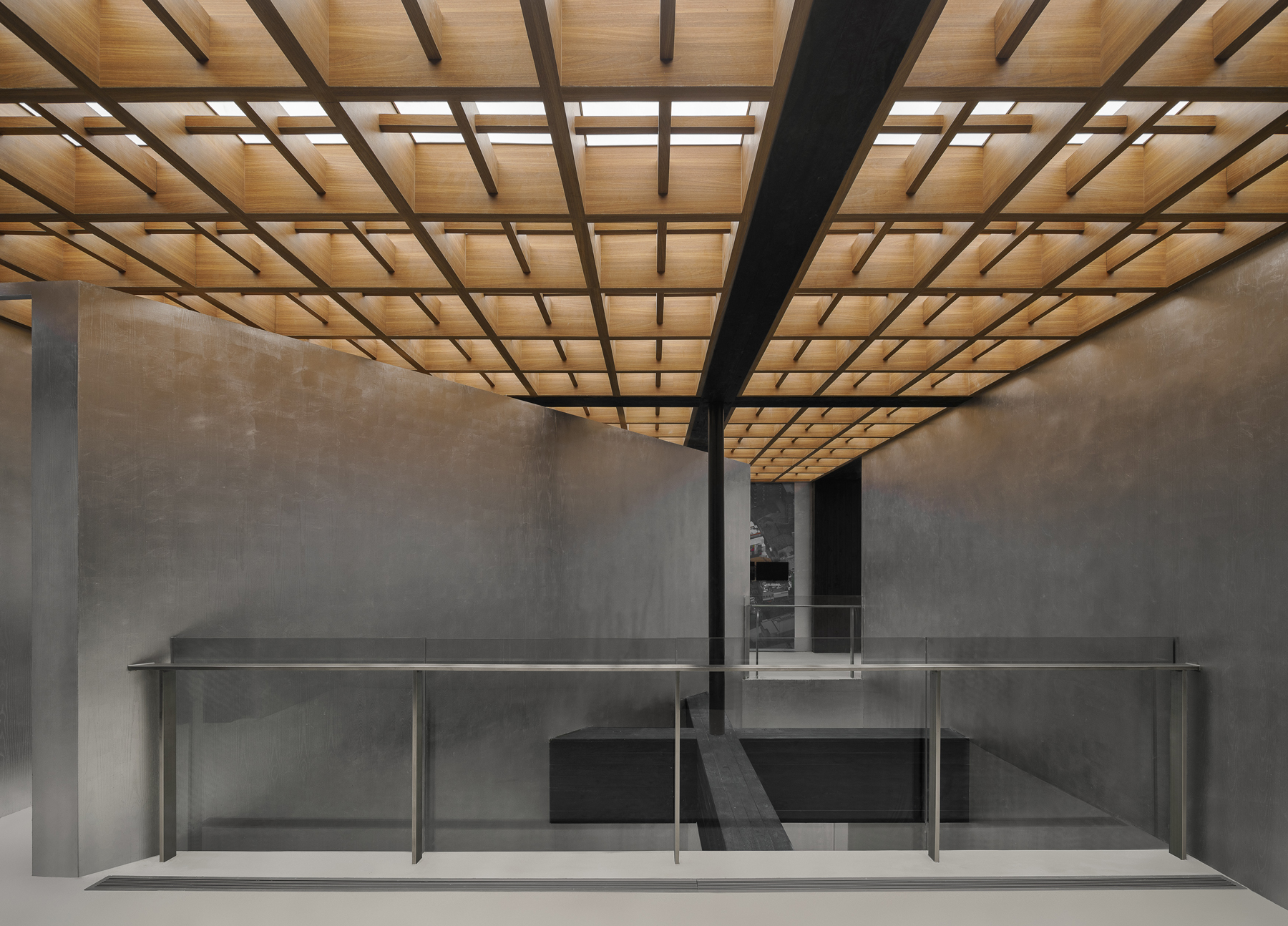 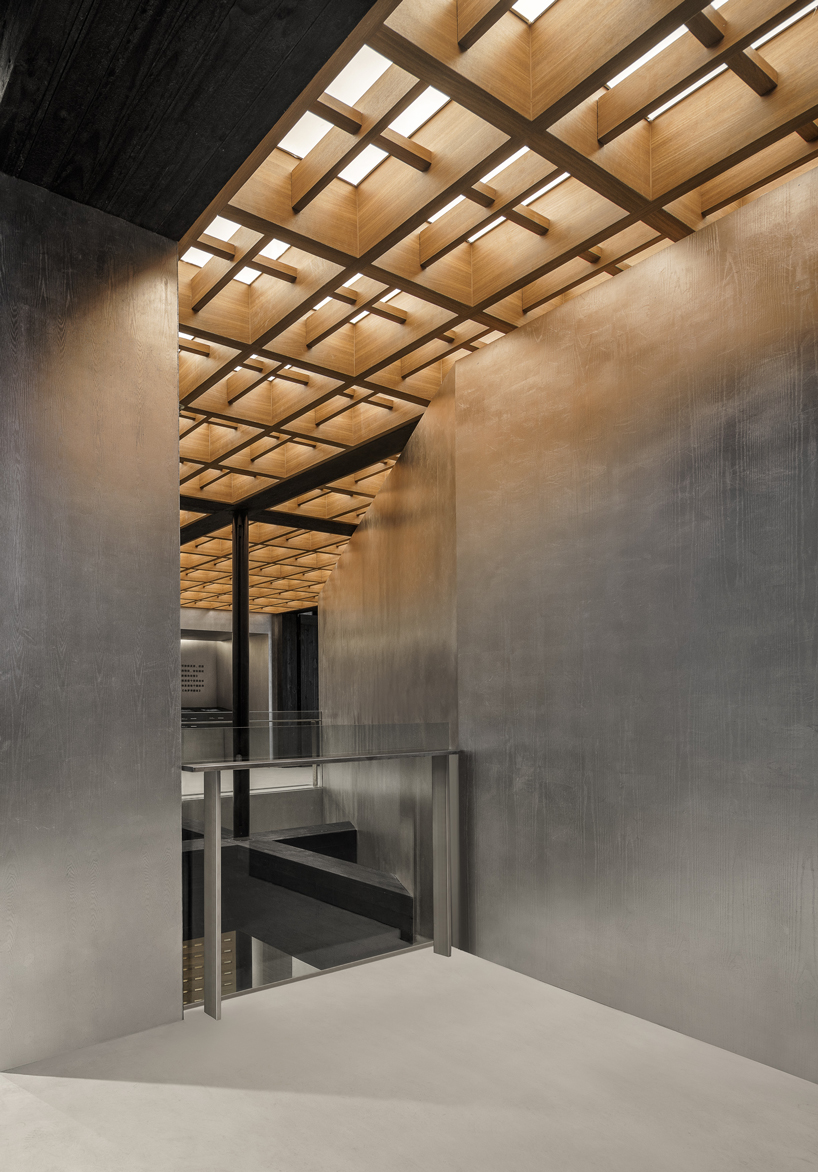 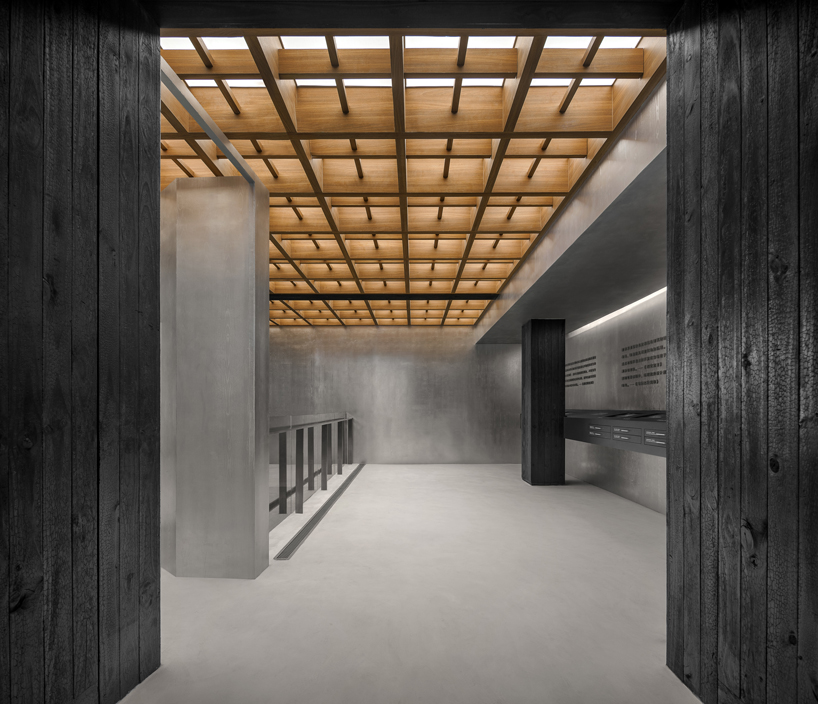 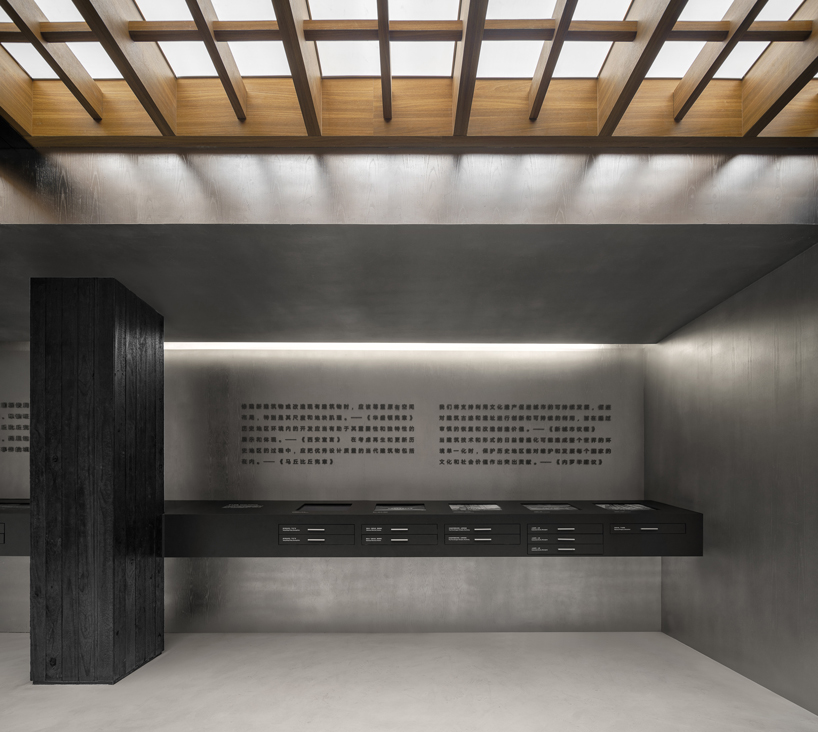 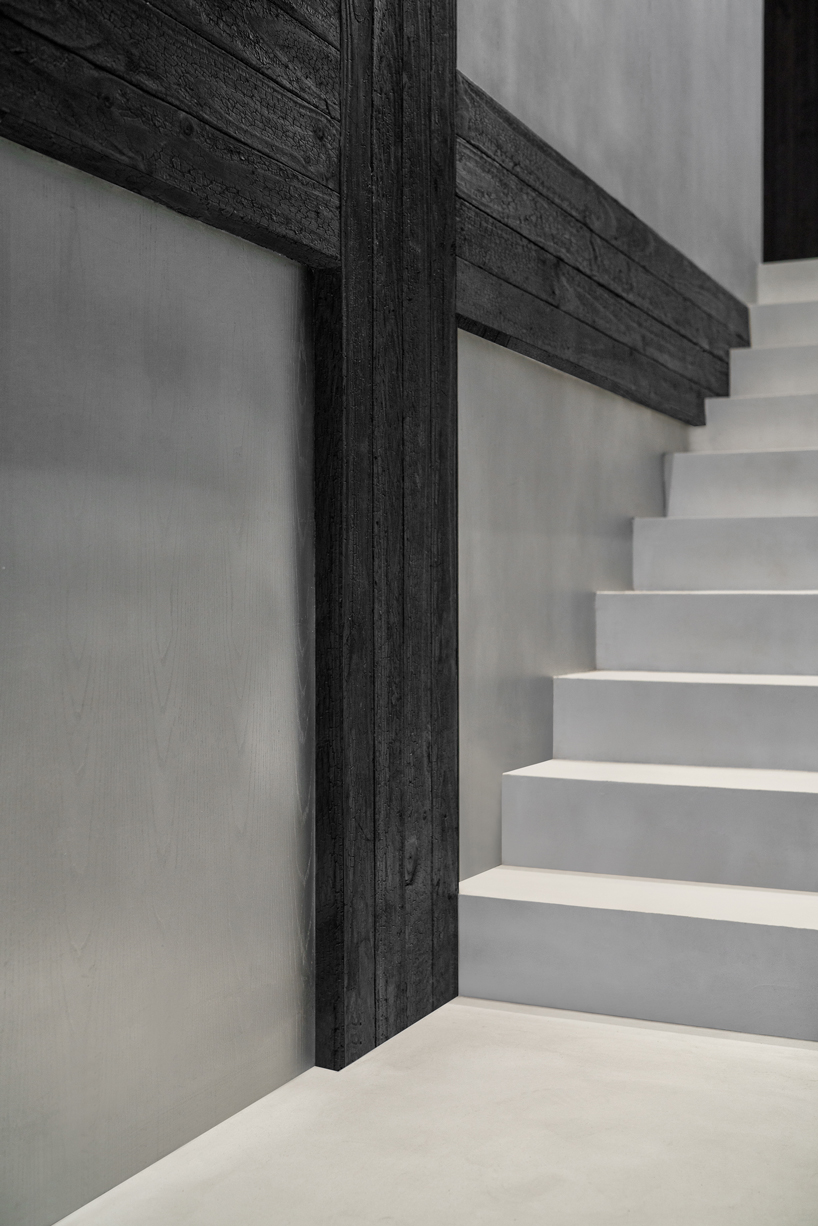 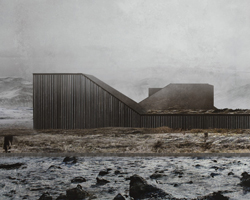 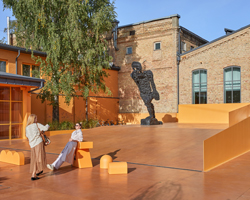 Oct 17, 2020
austin maynard architects designs its union house in australia as a space for play
a climbing wall and nets allow the family to travel between levels without ever using the staircase.
architecture
438 shares
connections: +1840