to mark the 500th anniversary of palladio’s birth zaha hadid and patrik schumacher have created ‘aura’, which will be installed at villa foscari la malcontenta as part of the venice architecture biennale 2008. the installation is made up of the two sculptures ‘aura-S’ and ‘aura-L’, each will be shown in a separate room.

‘aura’ is an experiment in translating villa foscari’s palladian design, which relies on a defi nite set of harmonic proportions, into a contemporary space whose elegance and dynamism is generated through a process defined by a non-linear set of rules elicited from palladio’s theories. since the renaissance architects tried to embed in their compositions the musical concept of harmony and the mathematical relations that un-derlie notes, intervals and chords while producing a sound. 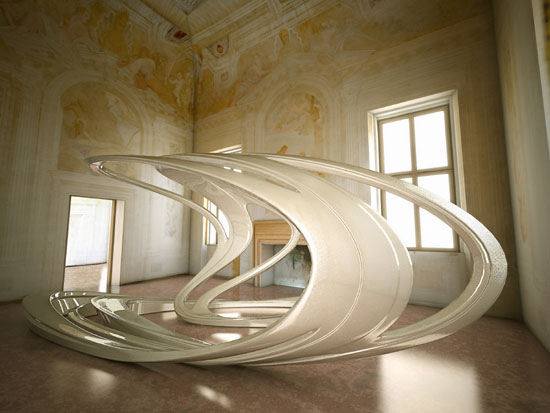 palladio used this concept of harmonic proportion to link his villa’s rooms, aiming for a global system of harmony. the process of generating aura’s form brings these linear proportions into their musical meaning. each of them corresponds to a musical harmonic that in turn can be described as a frequency wave: a half is an octave interval, four thirds is a fourth and so on. by overlapping all the frequency curves generated from villa malcontenta’s proportional system and progressively changing them with mathematical algorithms it is possible to define a genotypic elementary space whose form contains in its DNA the whole Palladian set of rules. 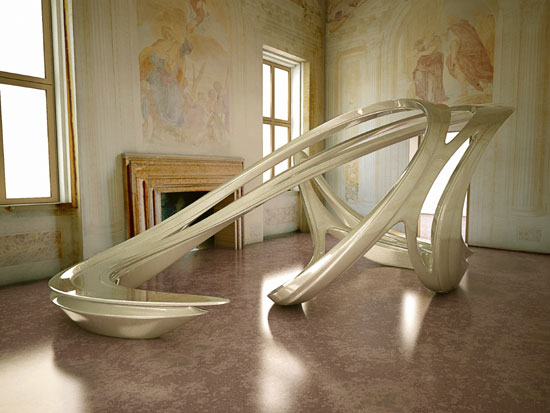 at the same time the parametric nature of the process makes the form able to adapt itself to multiple environments within the villa, keeping track of every single variation or ‘phenotype’. the result is a new and more complex order that retains at the same time classical proportions but is not enclosed in a rigid and unique solution. in fact, like in lorentz attractor’s equation, every small change in the value of parameters will result in a different morphological configuration that will keep the same order but with altered proportions. this dynamic of differentiation helps in giving to the whole installation a spatial relationship whilst keeping every single space independent. this gives enough flexibility to create different scenarios within the villa and to configure a set of multiple relationships between two, three or four rooms. aura‘s design gives form to an ethereal space that doesn’t collide with the beauty and harmony of palladian interiors nor does it hide the perception of its frescoes. its proportions in plan are part of villa malcontenta’s harmonic system and allows to experience its spaces both walking through and circulating around. 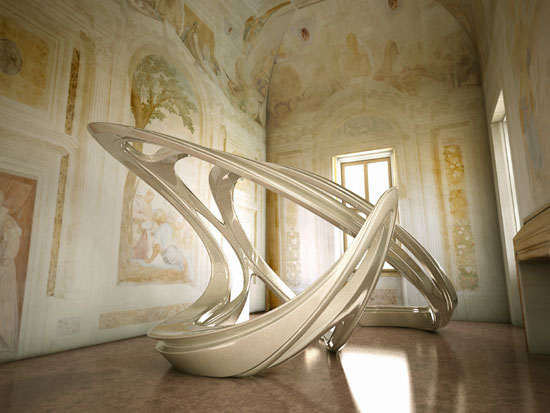 this puts in context the humanistic anthropocentric vision of architecture with contemporary spacial values tending to emphasize the skin, the interface, the environment rather than the interior. aura doesn’t claim to reinvent palladian space nor to perform as a tool for reading hidden meanings through its gaps. its stream of thin elongated curves painted in a glossy reflecting finish catches the atmosphere and the colours of villa malcontenta bridging the past with the future.