unfinished: a closer look at the spanish projects presented at the venice biennale
(above) two houses in oropesa by ángela garcía de paredes and ignacio pedrosa
image © luis asín

at the 15th international architecture exhibition in venice, the golden lion for best national participant was awarded to spain for an exhibition titled ‘unfinished’. curated by iñaqui carnicero and carlos quintáns, the display consists of proposals and photographic series that present potential solutions to the problems arising in spain after the recent financial crisis. the projects on display seek to show how creativity and commitment can transcend material constraints. below, we highlight a selection of the presented schemes. see designboom’s previous coverage of the pavilion here. 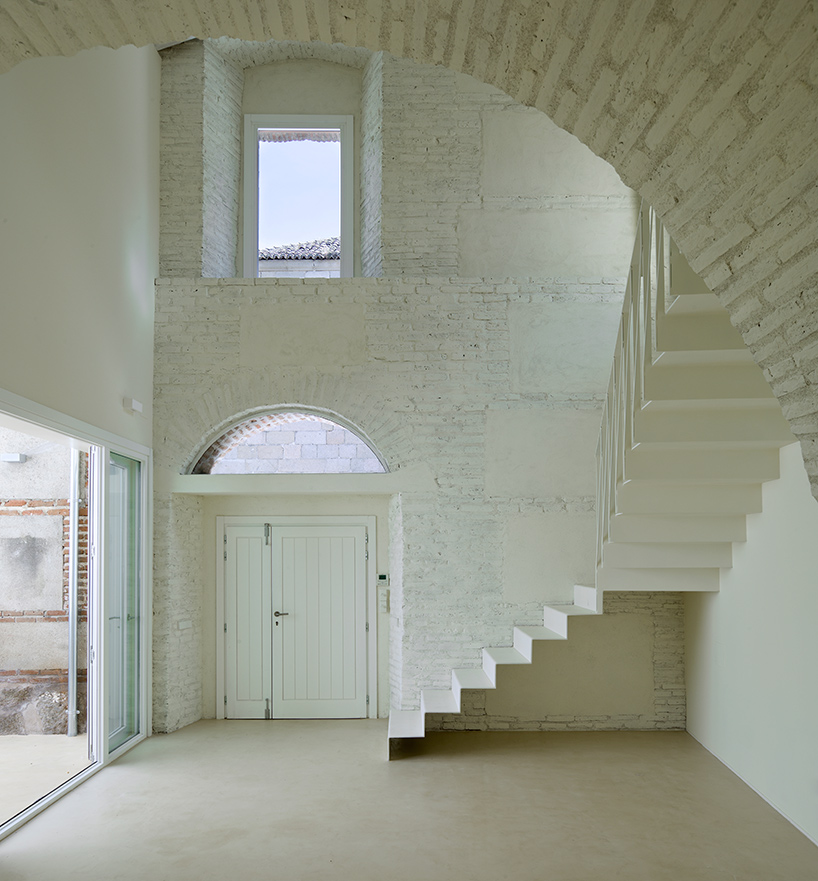 in the 15th century, one of the spanish nobles living in the famous castle of oropesa ordered the construction of two walls to connect the castle to the neighboring ‘nuestra señora de la asunción church’. within the arcades existed two small houses and a street that remained untouched for centuries. spanish studio paredes pedrosa arquitectos completed the renovation of these households, which retain much of the original character with which they were built. see more of the project on designboom here.

‘casa 1014’ by catalonian practice H arquitectes is situated in the historic city center of granollers, near barcelona, on a narrow site only accessible from the streets at either end. the home exists as an infill project inhabiting the space between the two party walls of the adjacent neighbors. the original facades of the preexisting structure was the only thing worth salvaging as the client wanted to completely reconfigure the site. see more about the project on designboom here.

restoration of the old church of corbera d’ebre 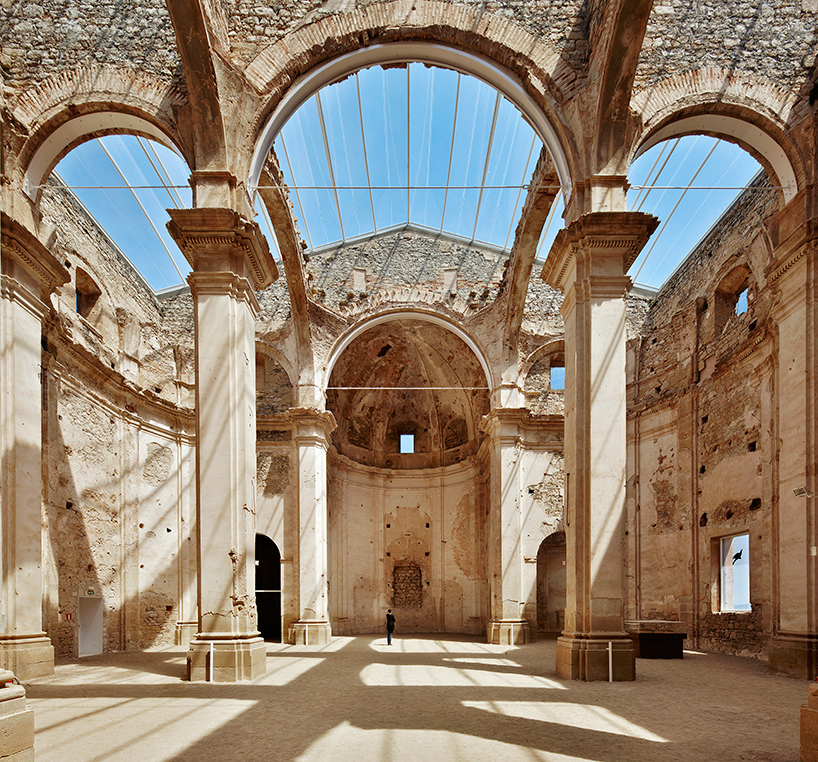 architect ferran vizoso restored the town church in corbera d’ebre near tarragona, spain, whose roof structure was entirely non-existent. as an icon of the town and a relic from the spanish civil war, vizoso aimed to restore the masonry structure to return it to its community, and at the same time preserve its new-found character: an open plan where the sun’s rays flood the previously interior space, birds fly across the nave and vegetation subtly creeps in through the windows and over the walls. see more of the project on designboom here. 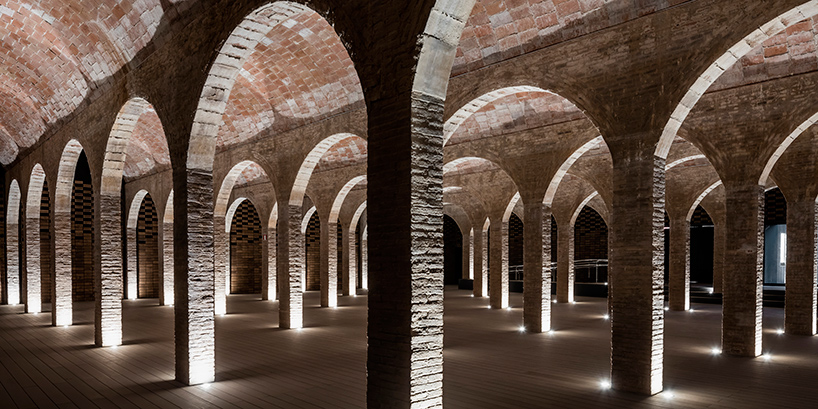 the ‘rei marti’ water deposit had been hidden beneath a pine forest until just 20 years ago. the building was used to store water from the torre bellesguard house in barcelona, designed by gaudi and located next to a viaduct also attributed to the catalan architect. upon discovering the 600 square meter space, authorities decided to make it accessible to visitors. local firm ARCHIKUBIK renovated the space, making it fit for public use. the restoration is as faithful as possible to the original space, as it was first encountered. consequently, its character and materiality have been strengthened by the architects’ intervention. 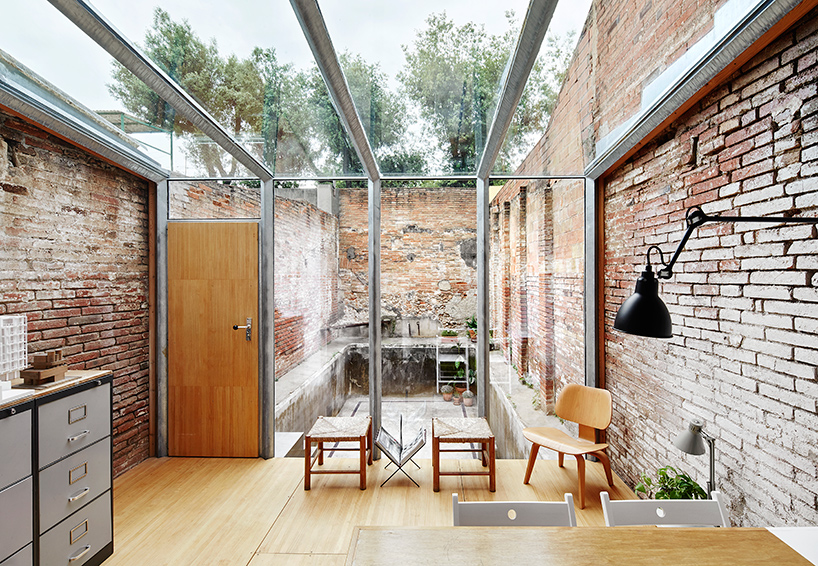 this restored studio by sauquet arquitectes i associats occupies the ground floor of a residential property. it was originally a tannery, before becoming a garage in the 1950s. for the past decade it was used as a print shop, before being abandoned as a result of the financial crises. its different uses have left architectural ‘scars’ that the design doesn’t try to hide. the intervention reveals an open cistern located in the back courtyard that is now empty. a meeting room had to be added to the existing workshop space to accommodate the new architecture studio. this addition, in the form of a ‘greenhouse’, floats over the cistern and hides mechanical equipment and modelling materials underneath. 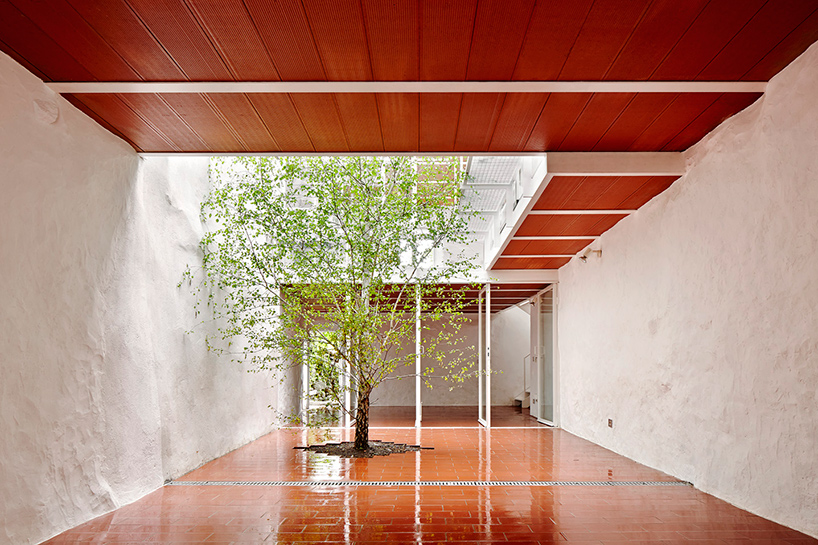 this townhouse by arquitectura-G has an elongated plan and narrow span that opens at the back onto a garden. neglect and the passage of time had left the house in a state of ruin. its owner wanted a light-filled house where she could enjoy outdoor living. the central part of the house had neither light nor ventilation, making it barely habitable. these constraints, compounded by a low budget, led to a simple design strategy: totally emptying and stripping the interior of the building, maintaining only the stone façades and the rammed earth party walls, and organizing a new interior around a courtyard. see more of the project on designboom here. 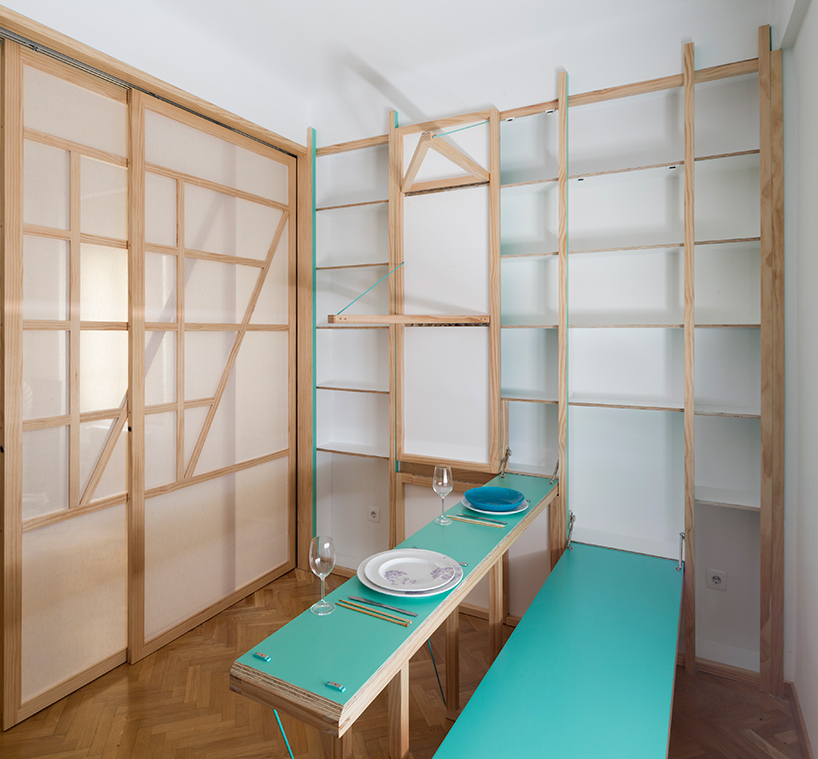 this modest home intervention in madrid by elii architects proves that even the smallest of rooms can be adaptable and flexible. showing that with simple operations, one space can be turned into many, the project, called ‘susaloon’ references the concept of a black box, seen in theater stages. at 23.5 sqm, the resulting design is a timber shelving-like system, detailed with turquoise paint and comprised of movable, adjustable panels. see more of the project on designboom here. 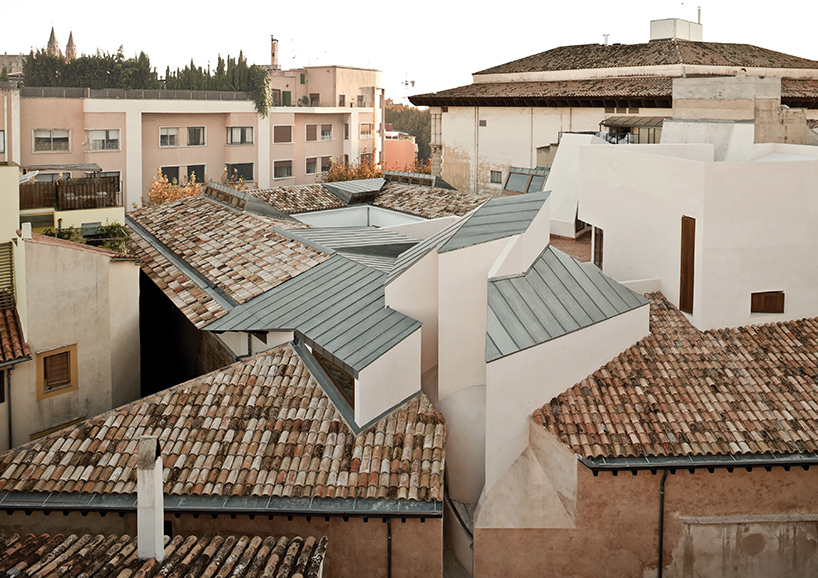 the casal balaguer is a 14th-century palace in the historic center of palma, majorca. it was first renovated in the 16th-century, before being enlarged in the 18th-century. within the last 15 years, the city of palma decided to convert the building into a cultural center. the transformation, completed by flores & prats, includes galleries, public space, and lecture halls. the ground floor’s structural renovation made it possible to revert the courtyard to its the original condition, with three arches that seem to support the suspended house above. the main floor houses a museum, while the attic contains workshops for fine arts studies. 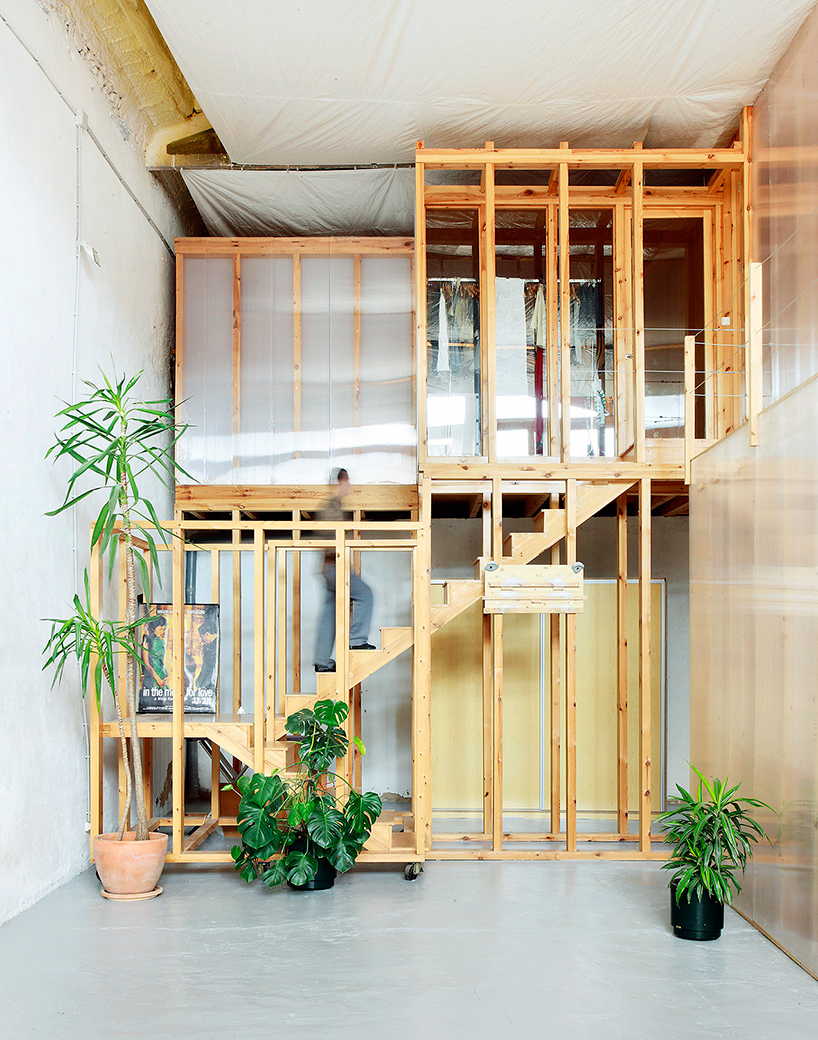 in 2011, architects núria salvadó and david tapias installed an open system of units within an abandoned cinema. the modules can be dismounted and modified as required, forming an adaptable house within a house. each space can be heated or ventilated independently, and at the same time heat or cool the entire space. each volume is intimately related to one of the windows and at the same time they are scattered throughout the building, forming a landscape of boxes within the space. 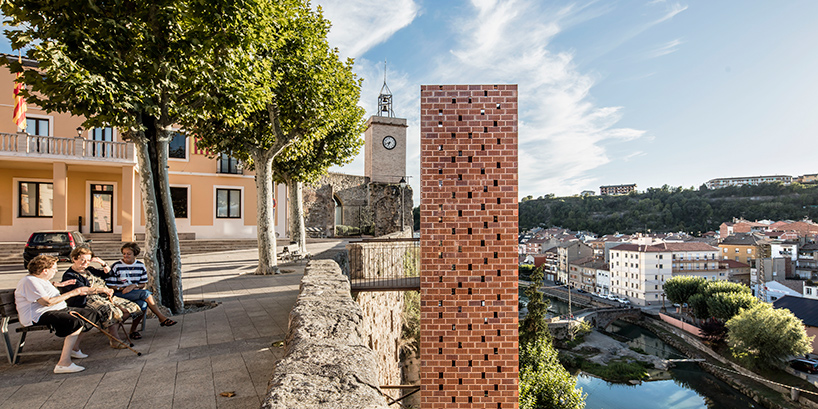 in catalonia, architect carles enrich designed a 20 meter-tall elevator access on the right bank of the gironella’s river llobregat — connecting the river to the medieval castle above. the project was commissioned because of the growing inaccessibility between the old and new districts. the narrow and cobbled streets proved difficult for the region’s elderly and infant population and resulted in the elevated historic center becoming depopulated. see more of the project on designboom here. 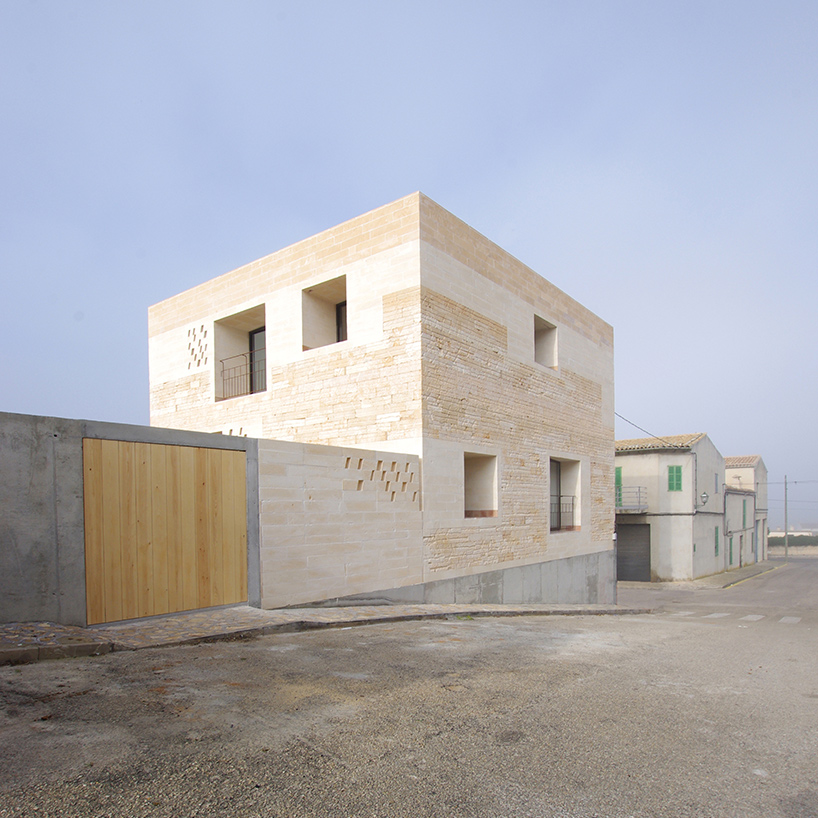 the house, designed by TEd’A arquitectes, occupies a corner site and is oriented in two directions. in order for the structural walls to dominate the space, the mechanical systems are located along the perimeter, creating a thick façade. this frees up the center of the plan and permits visual and programmatic connections aomng the spaces. the materialization of these walls is a fundamental part of the project. there was an existing structure on the site built with bearing walls of marés, a local sandstone used to give the new facçade its texture and character. 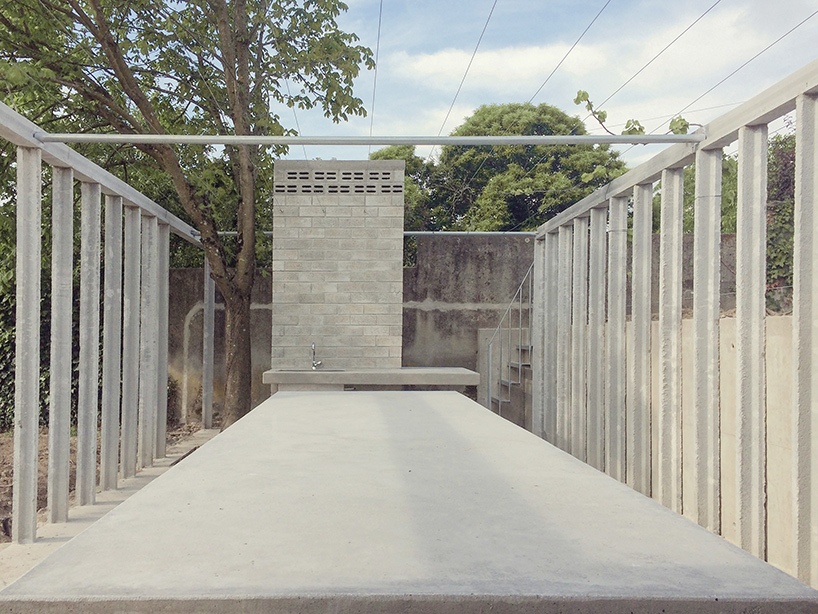 this project in north-western spain sits on an irregular site with a distinct change in levels. this natural topography was used by trespes.arquitectos to separate the two parts of the program — the swimming pool is placed on the upper platform, while the annexes are located at the lower level. existing trees are complemented with a new arbor that provides shelter from the wide, and shade from the intense spanish sun. 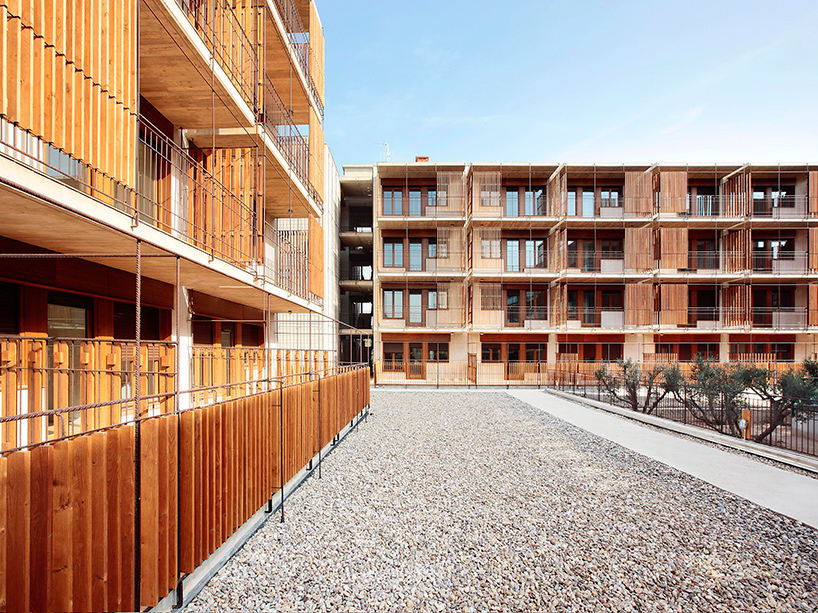 set out as a new urban pattern, this project by toni gironès proposes a fabric with various scales of intervention. the social housing program develops relationships with its surroundings, constructing an architecture closely related to the users’ reality. at the same time, the entry areas and community spaces are designed as places for relaxation in the intermediate areas between the apartments and the exterior space. the apartments have two opposite orientations and have a transversal sequence of spaces: breezeway, apartment and terrace, which lends them versatility and the capacity for adaptation linked to use and climatic circumstances.

all I own house 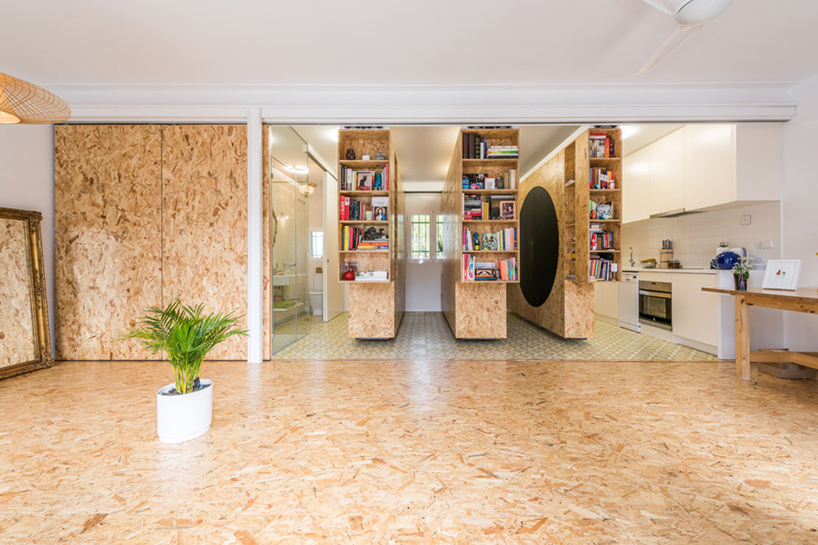 ‘all I own house’ is a project by PKMN architectures that materializes the interior of a house through the personal belongings of the people who occupy it. through custom design, and the combination of the cabinetry with a simple system of industrial linear rail guides, all of the house’s service spaces are organized using three containers made from OSB wood panels. these units are are suspended, mobile and transformable. see more work by PKMN architectures on designboom here. 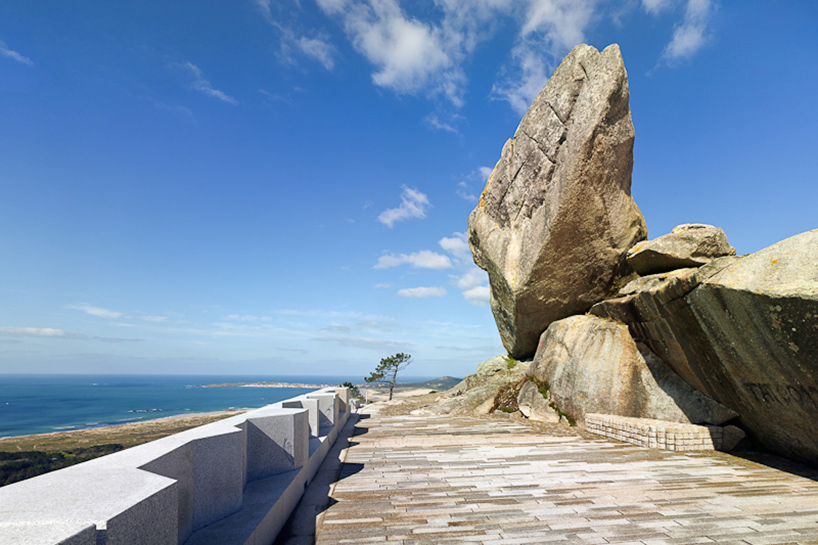 this project was commissioned to improve the area around the famous ‘pedra da rá’ geological formation. firstly, an existing lookout built in the 1980s was demolished, and the rock was restored to its original state — highlighting its exceptional geological and formal characteristics. architect carlos seoane then constructed a space around the stone that provides information to other areas of natural interest. the design uses granite to form the intervention’s paving, benches, and stairs. 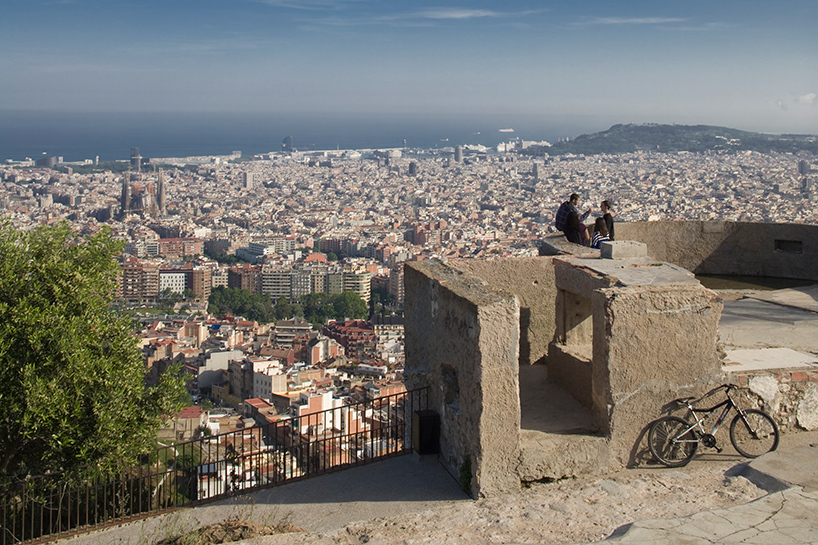 this historic site in barcelona has had many different uses: agricultural settlement; anti-air defense bunkers; communication tower; 360º lookout point; and open-air museum. a recent restoration by AAUP + JDVDP highlights the scars left by turó de la rovira’s previous functions. the design permits the appreciation of the different uses that a space can have depending on the era. superimposed as a new layer, the imperceptible frame seeks to make visible everything that has gone before. 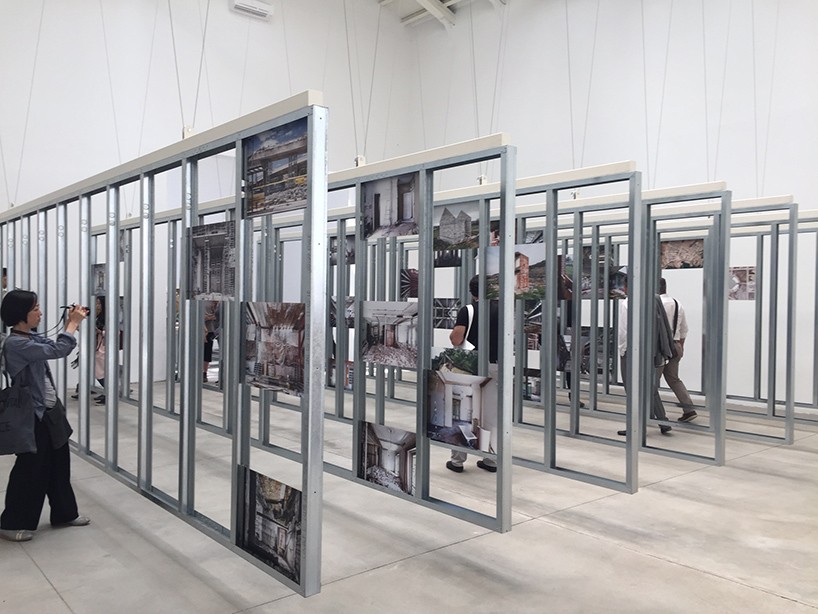