‘fountain of the liquid stone’ is a place for hindu spiritual practice and an urban public space envisioned by verasu saetae. the project speculates on architecture as a religious commutative device that can convey spiritual experiences to both believers and non-believers. the aim is to explore the notion of physical contact with water, both in hinduism and an urbanized city like hong kong. referencing the hindu rituals and festival, the ‘fountain of the liquid stone’ was designed to perform those ceremonies in an outdoor urban environment.

water in hinduism is a significant ritual medium as it has the power to purify one’s soul. by bathing in the sacred river, lake or ocean, one lifetime‘s sin could be omitted. it also has the ability to bring people together. during kumbh mela, the largest human gathering on earth, more than 30 million people congregate every 12 years to take a dip at the ganges river, the indian river of life.

water in an urban environment flows through the city’s infrastructure in various shapes and logics in order to reach its inhabitants. a pipe system is equivalent to a blood vessel that keeps the city alive, a fire hydrant is an object to ensure the city’s fire safety, and water bottles have been manufactured to ensure a cities’ water supply. with these types of containers, people can access to more natural or pure water sources around the world. 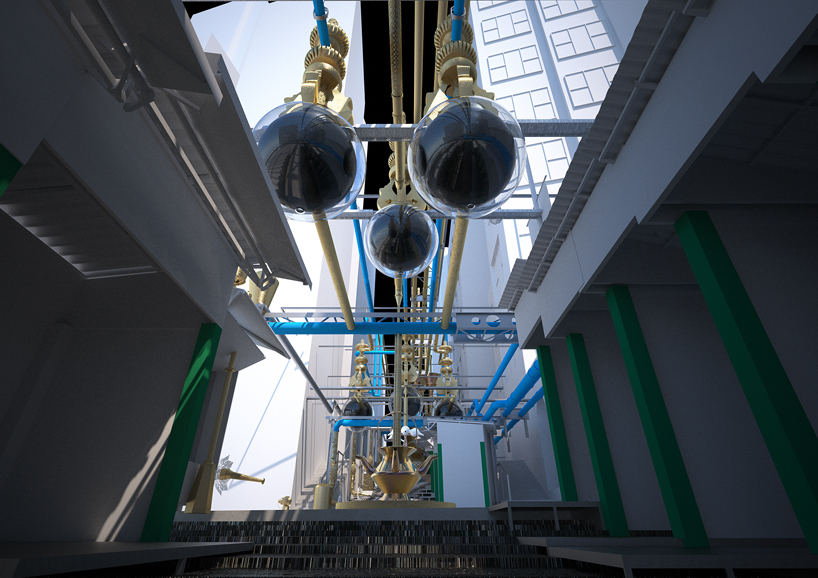 through the street, passing water reservoir, and pipes

the project offers a public drinking fountain, a street cleaning device, a heat and cold generator and a space for hindu spiritual means. the design begins by integrating the water infrastructure system, water reservoir, and pipes, with hindu‘s artifacts and ornaments. the ‘fountain of the liquid stone’ has four main layers of pipelines running along it and each line contains different types of water.

the first level is the drinking water pipes: containing natural spring water, mineral water, and sparkling bottled water. each type of water will run in its own pipe cycle and has its own loop. the second layer is the rain water pipe: this pipe is connected to the street washing nozzles which are installed every six meters along the project. it will operate daily as the ceremony is performed. the third level is the spiritual water pipes: these pipes carry water from the ganges river, milk, and yogurt used to perform a lingam worship. those pipes will be placed above the 3-meter height stone lingam at the top of the street. as the ceremony begins, the street will be washed and cleaned automatically. the last layer is the temperature pipes: these pipes radiate heat during winter and cool down the area in summer. they reduce stress for people passing by and create a controllable experiential atmosphere.

the water tower station, based at the existing construction site on queen central road, will be the controlling hub of the project. the trailers and trucks will unload their water here and it will be stored in typical reservoirs that are connected to ornamented copper pipes that pump to the four public drinking fountains along the street. the design of the fountains references the hindu artifacts which are used to worship their gods. these objects have a significance meaning and pronounce a specific way to interact with water. above each drinking fountain, there will be a special sub-water reservoir to reduce the pressure of the water before distributing it. 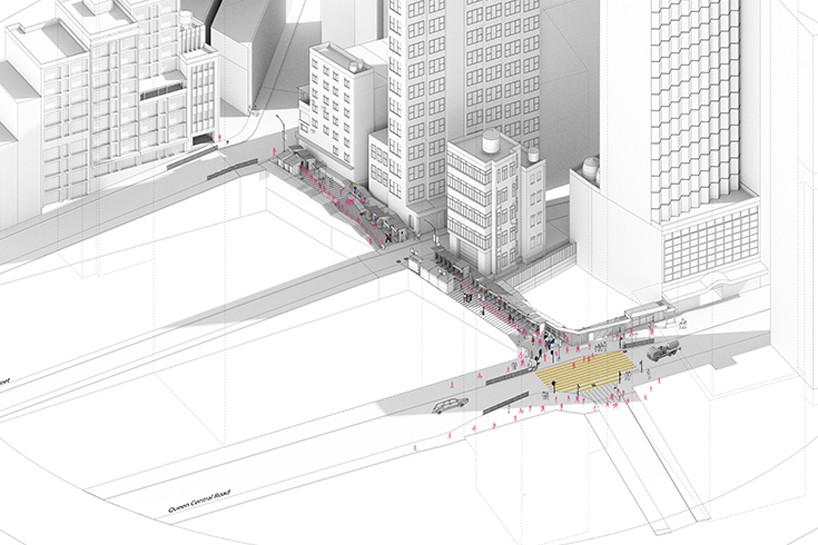 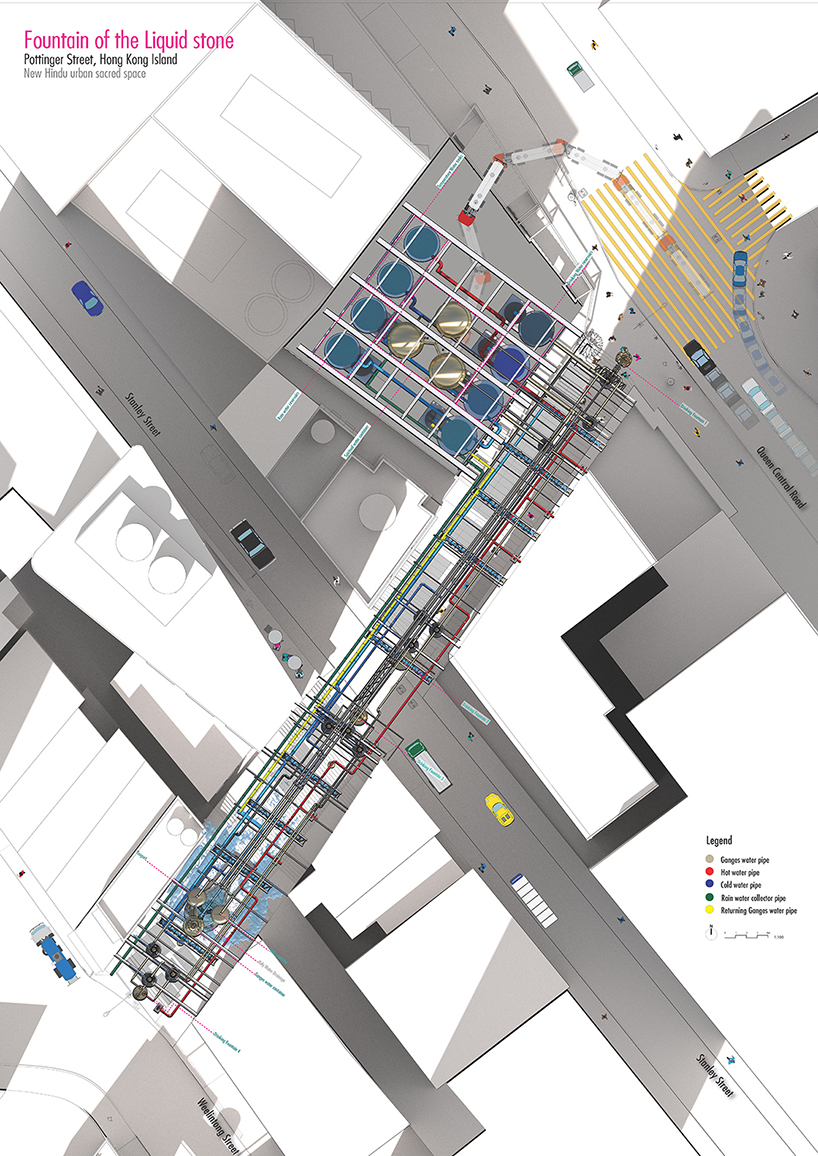 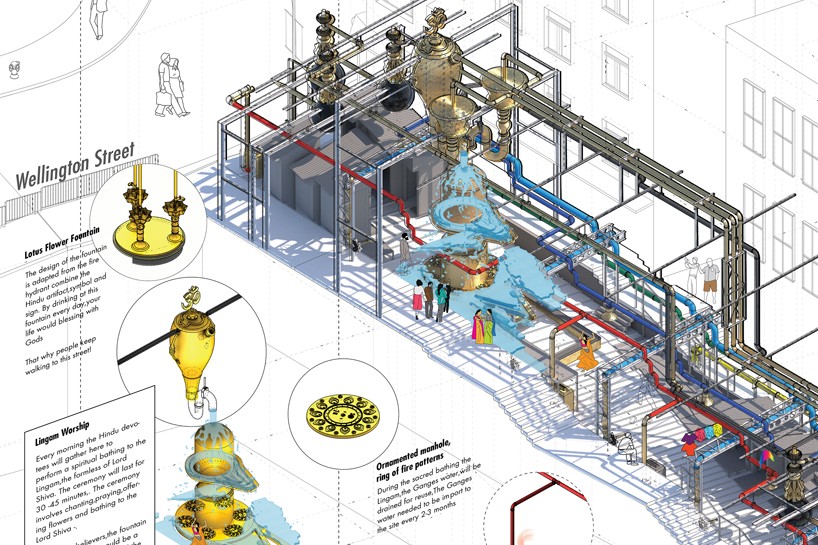 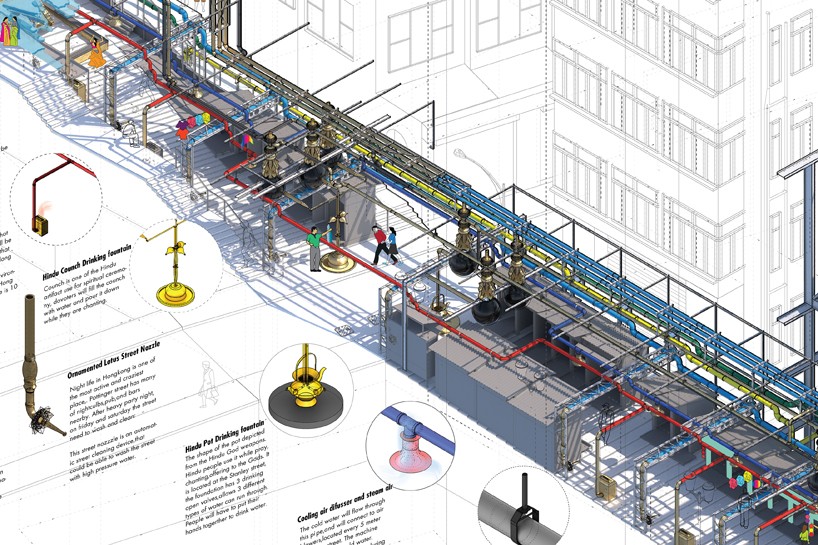 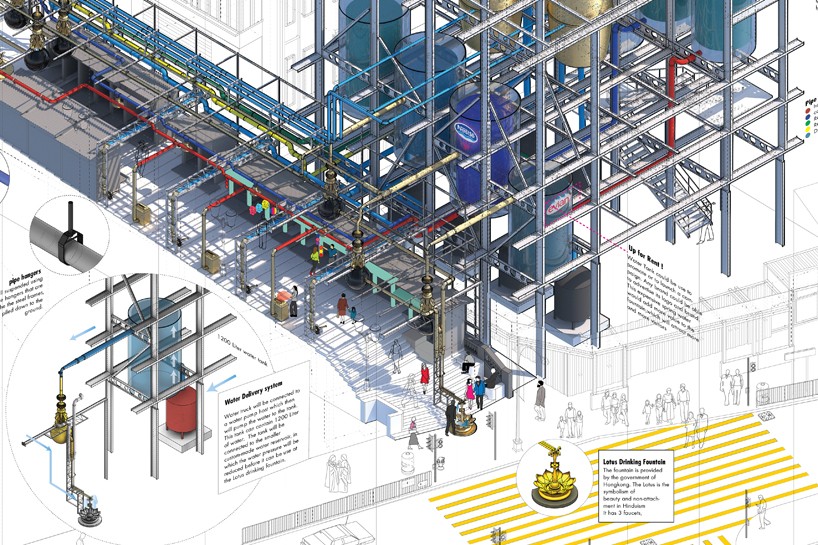 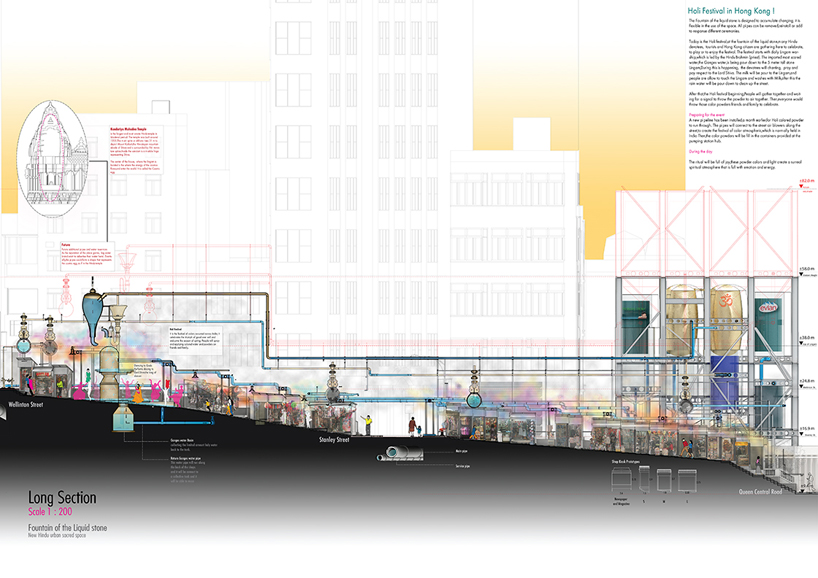 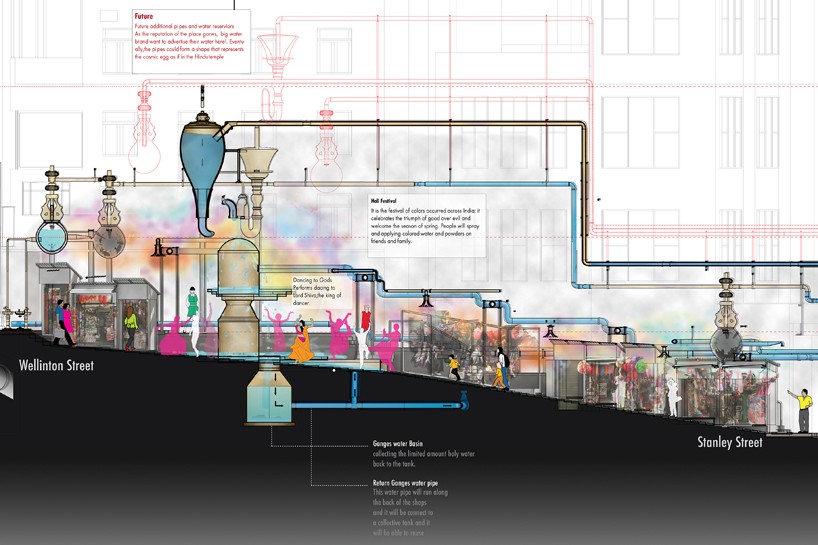 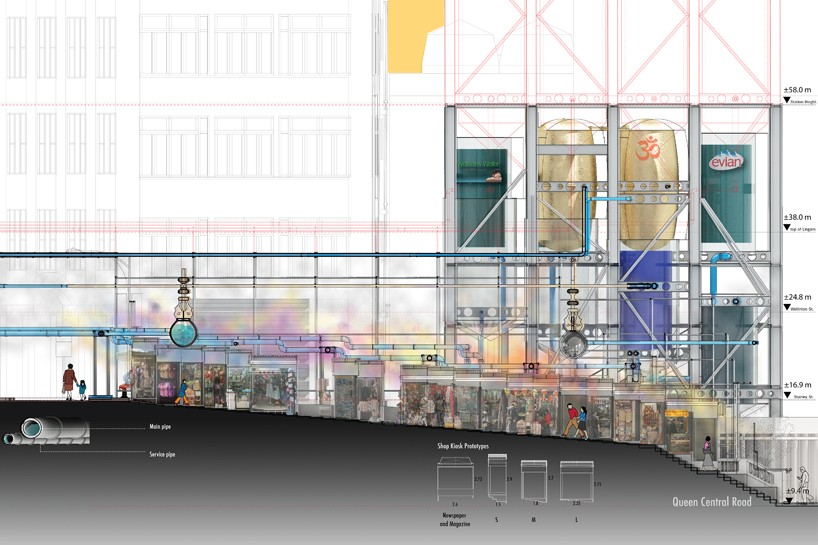 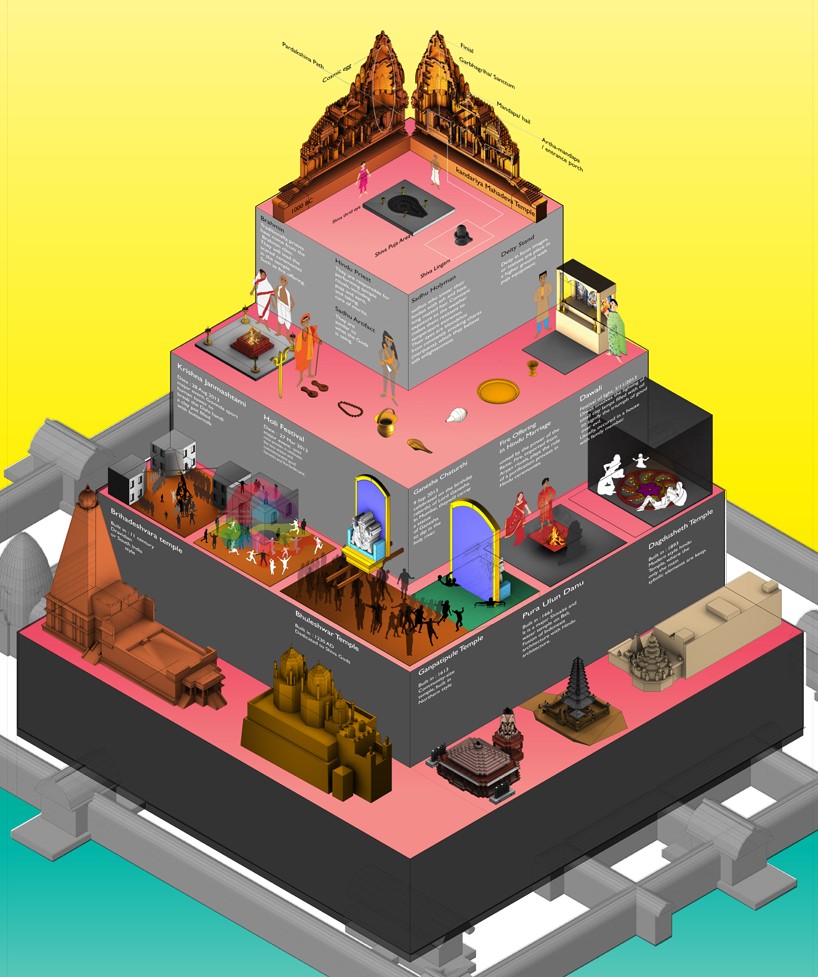 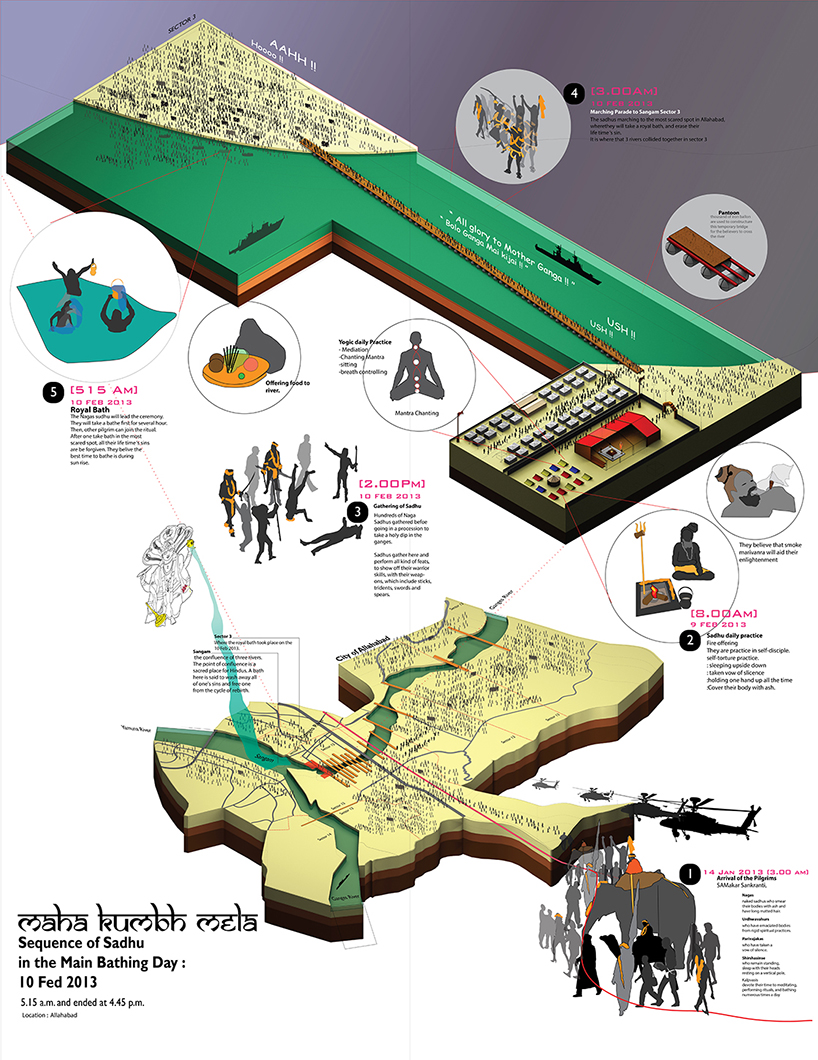 a collection of artefacts and their spiritual value 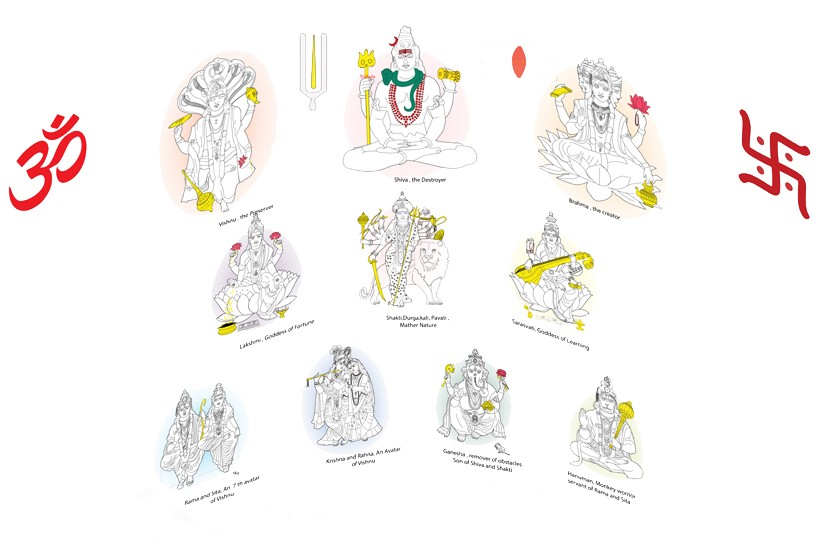