studies on prison sentence reveals that post-release offenses were higher after imprisonment. taking criminals out of community and incarcerating them is just a temporary solution. during their time in prison, inmates resocialize into a prison community or rather a crime community instead of rehabilitation; eventually return to the path of crime. the majority of offenses committed are lesser crimes, and these offenders are those with higher chances of rehabilitation.

community too plays a role in helping ex-convicts in their rehabilitation process. yet there is a social stigma towards ex-convicts. in the end, rejections and scorns forced them to go back into the way of crime.

rehabilitation essentially involves both the offenders and community. to achieve this, we propose a prison where the criminals are taken off the street to a place within that community and while serving their sentences, they continuously contribute to that particular community yet remain separated; a vertical prison.

design to separate – a prison without wall the purpose of a prison is to isolate the inmates from society and a prison needs a barrier to do so. a vertical prison does so without a wall, instead it isolates the inmates through height, where jumping off the prison is the only option. 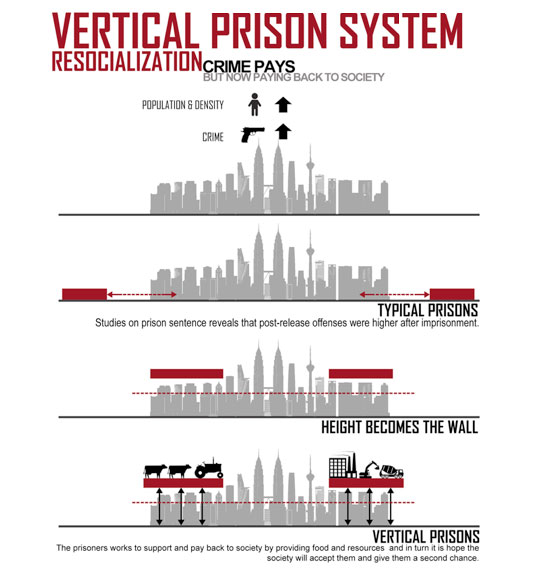 mobility and enforcement similar to the city below, the colony has its own transportation system which allows for law enforcement and other support system such as fire rescue and medevec to be provided by the means of mobile pods. in a riot situation, the armored riot control pod with fast roping capability allow for rapid deployment of riot control team while the armored riot control pod serve as a mobile operation base and observation platform to control and monitor the situation from above. meanwhile, the fire rescue and the medevec pods will move in to provide fire fighting, evacuation and medical support. 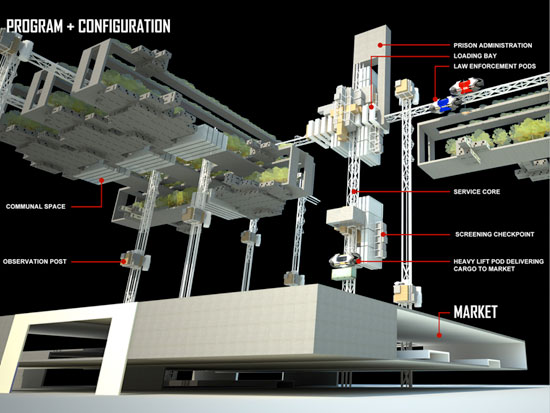 a parallel world the inmates will live in a parallel world with the surrounding. they know, see and hear everything that happen in the city, yet isolated by the height. it is similar to penal deportation to a colony above city. in this colony, the inmates work to sustain themselves and support the city below. they live freely in the colony and the city continues to have impact to their life. in the end, it is hoped that they can adapt more easily back into the society. 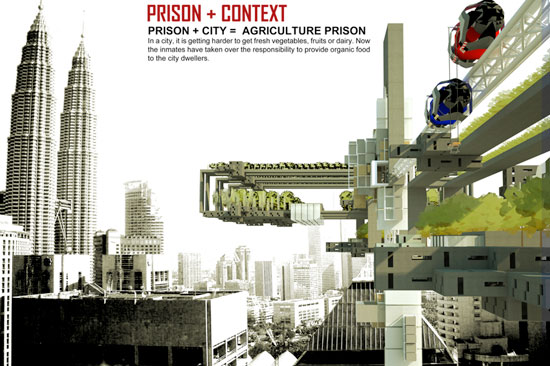 the relationship between prison and the city in vertical prison system while serving their sentence, the inmates will work to help support the needs of the community, in a way of paying back to the society. each prison is unique to its own context. in a city, inmates undertake agriculture activities to help feed the city or in an industrial area, the inmates help manage and reprocess waste to help the environment.

gradually the tension between safe and unsafe will shift to understanding and eventually the prison will become part of the community. it is hoped that through this symbiotic relationship, the social stigma of a prison would be softened and the society will be more in acceptance of the inmates, giving them a second chance for themselves and also giving society a second chance.