in a new, exclusive series, we’re spotlighting some of the 170,000 creatives worldwide who have shared their ideas and innovations through our readers submissions platform. designboom readers radar surveys the vernacular creative movements we’ve seen emerge thanks to the projects directly uploaded by our diverse community of architects, artists and designers.

the first feature in the series highlights some of the fascinating ways architects in vietnam are transforming urban spaces using greenery. the dense architectural attributes of many vietnamese cities have urged architects to consider the relationship between human habitation and the natural world. drawing from traditional ways of making, local materials and easily-accessible resources, creatives have looked towards vegetation as a means of bridging an otherwise ample gap between cityscape and landscape. from a plant-filled pavilion that purifies air, to a flood-resistant home made entirely from bamboo, discover the growing trend of green spaces in vietnam through designboom readers radar. 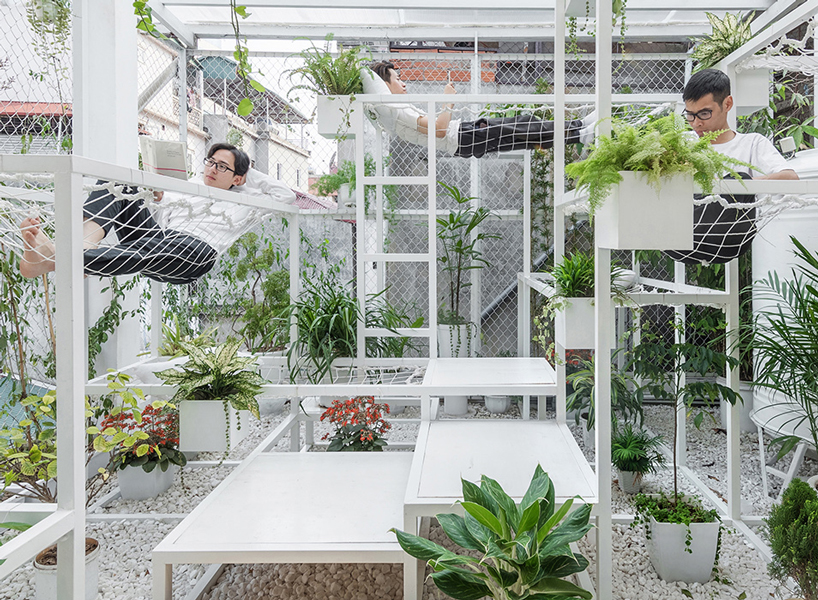 in hanoi — one of the most air polluted cities in the world — vietnamese architect hung nguyen aimed to generate clean conditions with the ‘pavilion of the origins’. the space attempts to bring back clean air by creating a hub for living ornamental plants. in addition to their aesthetic, the greenery helps purify the air by absorbing harmful toxins attributed to high traffic volumes and industrial activities. the pavilion sits on the terrace of a three storey hous, where the main structure is composed of many cuboid frames. suspended planters distribute purification in every corner of the pavilion, creating a harmonious relationship between human, nature and space. 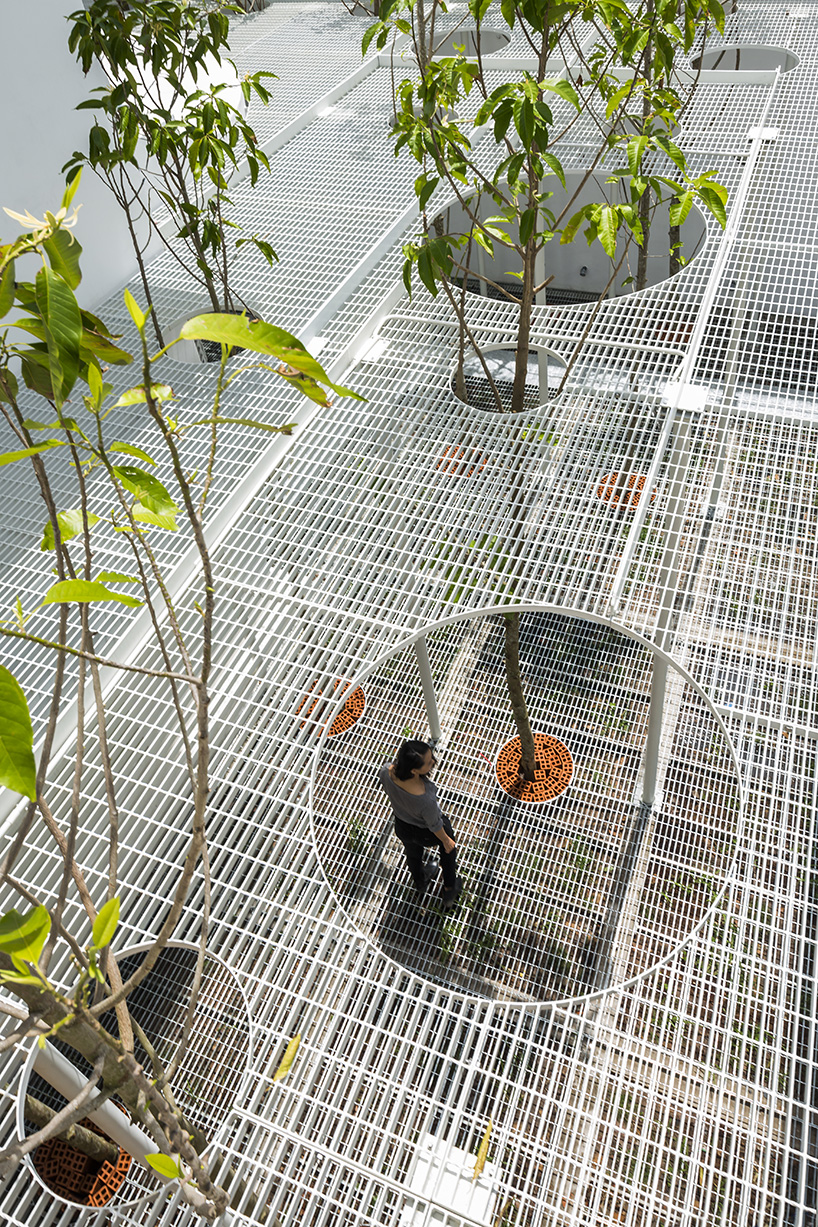 kientruc o was commissioned to remodel a traditional vietnamese house into a contemporary structure using spatial voids. the main challenge that arose throughout the renovation process, according to head architect đàm vũ, was deciding which pre-existing elements would remain as part of the newly remodeled house. the residence is a seventy years old colonial villa that sits on one of the busiest road in the heart of the city. elliptical in geometry, a void is carved along the horizontal side of the house, continuing upward to the roof. this configuration forms a receding pattern of the floors above, where a spatial abstraction of geometry is materialized. 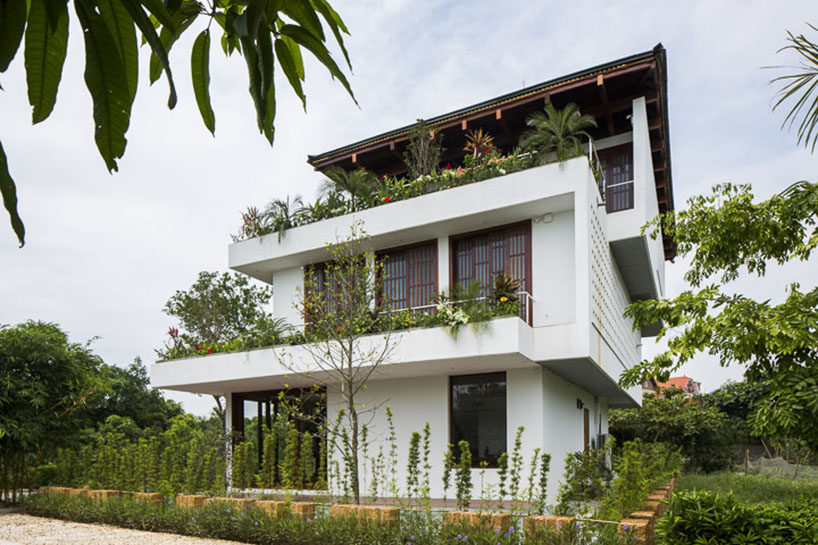 ‘step house’ by 03- is set in vinh phuc city, a one-hour car drive from hanoi. the client hoped to use it during weekends with family and friends, surrounded by nature and fresh air. the region is located in a hot and humid area. in spite of that, many vietnamese houses and buildings don’t have suitable ventilation and consideration for strong solar radiation. here however, the design team placed a fully-open door and balcony from the first to the third floor at the south and east side of the site in order to let the windows face the lake. the roof comprises a sloped wooden structure with ceramic roof tiles and an elevation exhaust window on top, providing ventilation on hot days.

hội an city boasts a thriving ancient quarter complimented by a breathtaking seashore. cam thanh, a small district in the southeast quadrant of the city, is just as brilliant. mangrove forests crisscross waterways, with abundant coconut trees and small dispersed villages. the area has everything necessary to succeed, except one thing — connection. the district was in critical need of a physical platform to act as a community hub. using flexible partitions, 1+1>2 designed a social space that can be modified to accommodate a large number of events and exhibitions. vines that hang across the garden, together with the coconut leaves roof, drastically reduces solar radiation while simultaneously providing shade. 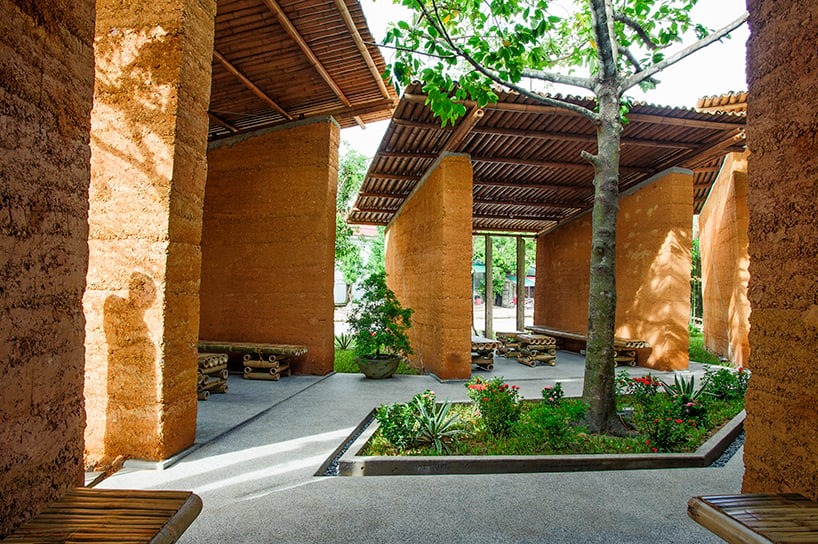 the sustainably built art and cultural center by vietnamese H&P architects is directed towards community engagement and education. located in ha tinh city, the ‘BES (bamboo, earth and stone) pavilion’ was built using locally sourced materials and traditional building methods. the construction process focused around user interaction and participation, hoping to teach people about the benefits of good design. the site features an arrangement of separate huts clustered around a centralized courtyard space, which shapes the pavilion’s surrounding landscape. the organic features of the pavilion’s design provide direct examples and teachings in aerodynamics (ventilation), physics (light diffusion), biology (photosynthesis, planting). 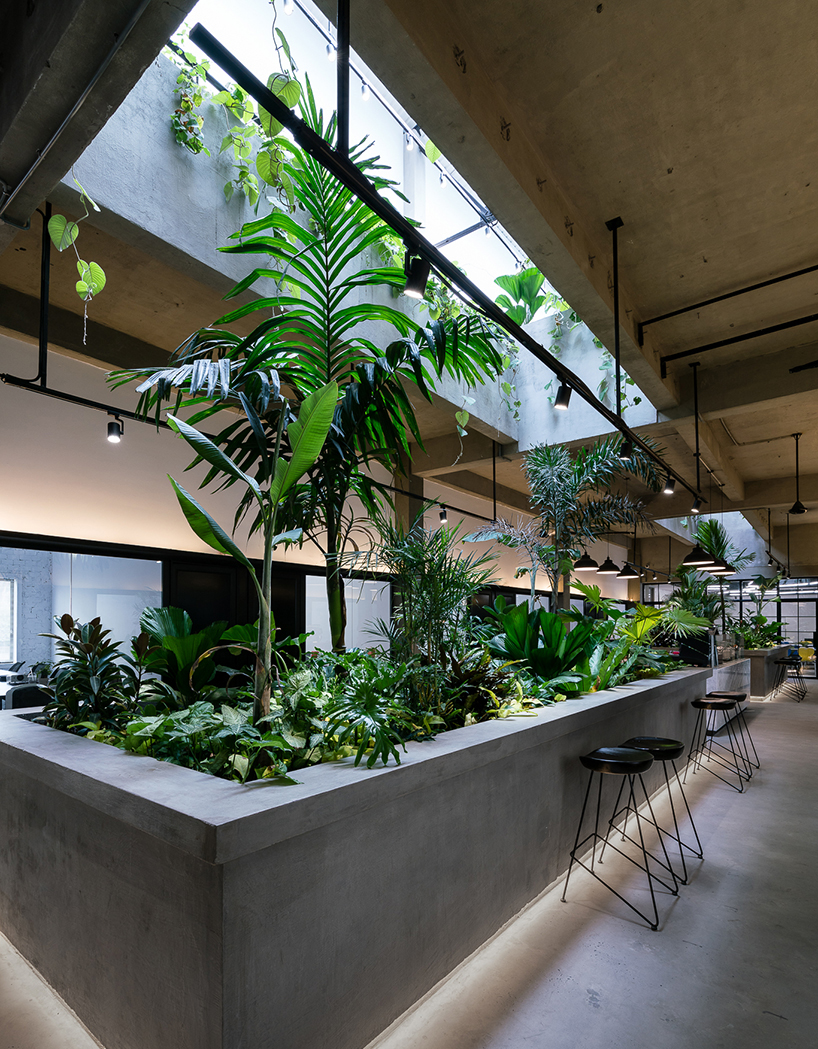 in the context of a dense urban landscape, it is logical that the rising start-up community would turn towards the highly efficient concept of co-working for their professional solutions. in the core of ho chi minh city and enclosed in the center of a large factory complex, G8A’s ‘jungle station’ sets the benchmark for conceptual design of such spaces. G8A’s conception of a tropical environment facilitates the flow between the various programs. the vegetal spine runs centrally through the space both horizontally and vertically, remaining visible from any public zone of the building. more than a simple combination of potted plants, the cooling and calming capacities of the green connector occupies all echelons of the space. 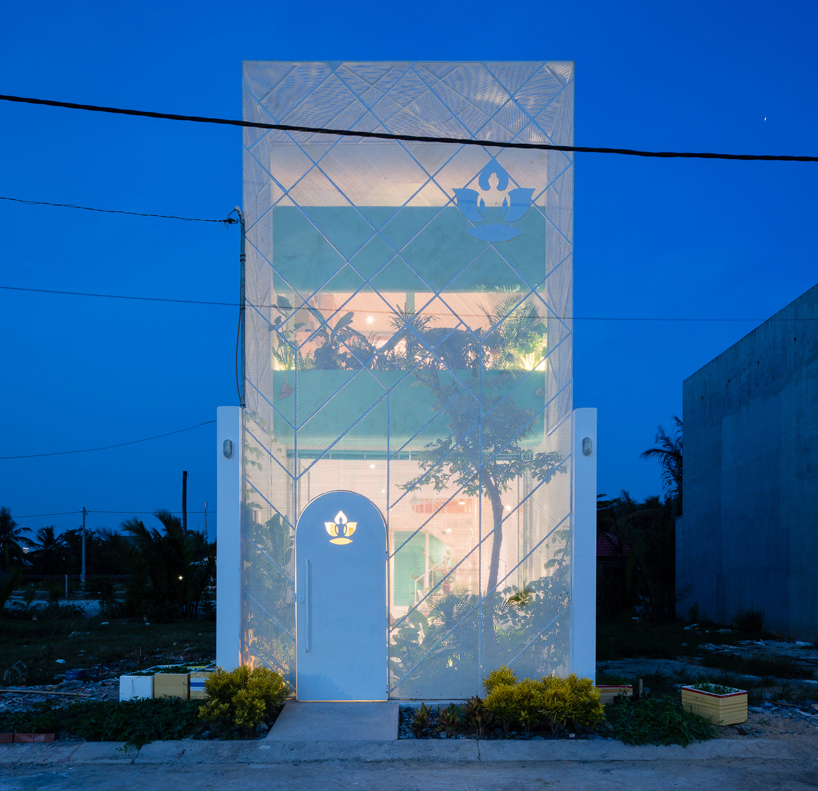 the transparency of exterior walls highlights the greenery of the house

HA (human architecture) designed a green and cozy townhouse in ho chi minh city. with dedicated spaces for large trees and vivacious plants, this 72 square meter dwelling brings together the serenity of nature with the compactness of urban living. the townhouse features movable partition systems within the structure, allowing homeowners to customize the layout to their preference. additionally, the perforated metal walls allow for the sunlight to illuminate the house throughout the day, while feeding the house’s greenery and converting the clean air amongst the pollution of the city. 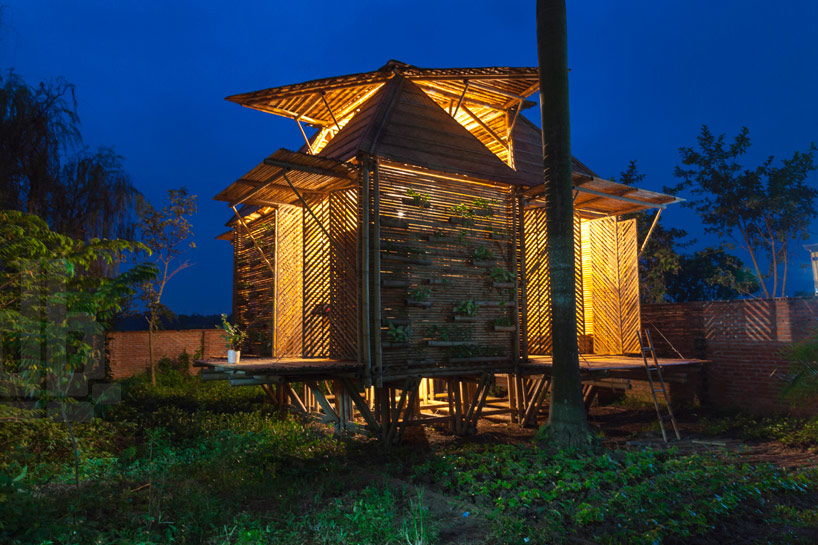 in a response to the often severe natural disasters in vietnam, local firm H&P architects designed the flood resistant ‘blooming bamboo home’. each modular structure is 3.3m x 6.6m and is assembled by bolting, binding, hanging, and placing the different elements. the building is strong enough to withstand a 1.5m high flood and currently, the architects are experimenting with the model to see if it can survive a 3m high flood. the interior of the building works as a multi functional space – house, educational, medical and community center are all possible options. the structure’s framework is made from small bamboo pieces, fiberboard and coconut leafs, which can be finished with cladding that suits its local climate and regional materials, offering an adaptable piece of vernacular architecture. 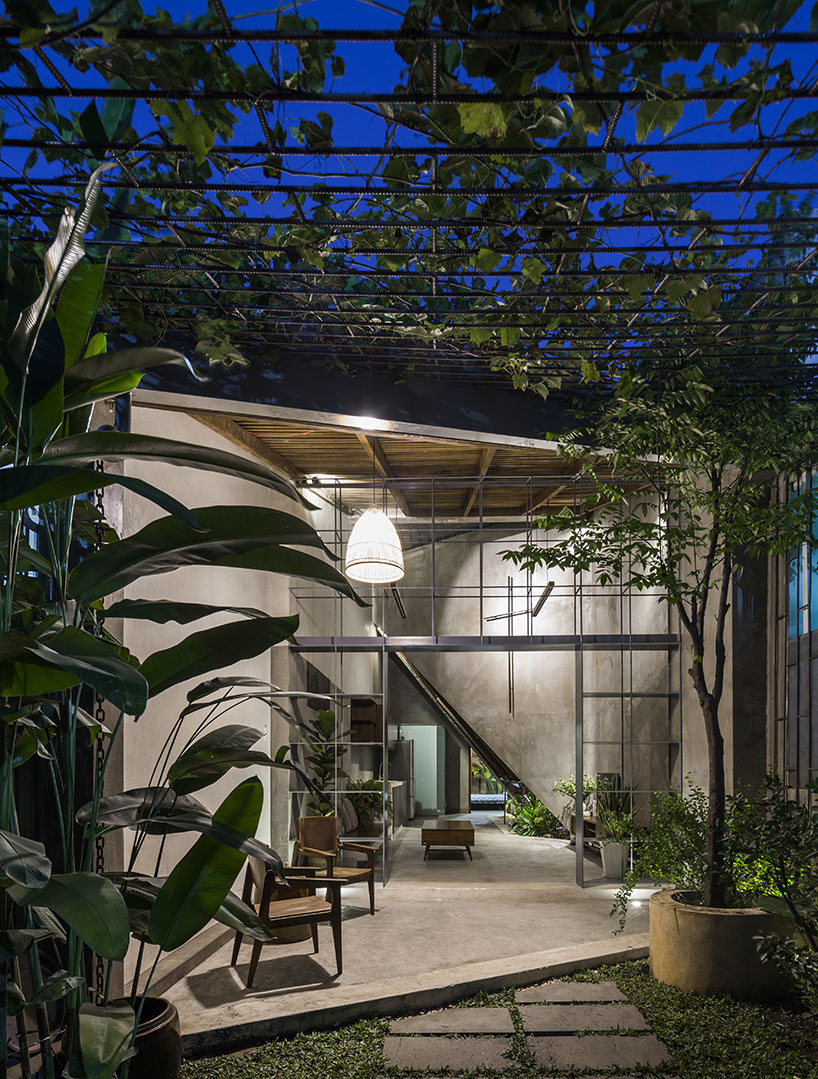 23o5 studio completed ‘the hut’ house, designed without limits between its indoor and outdoor spaces. located in the thu duc district of ho chi minh city, the project aims to incorporate plenty of green spaces that constantly disappear due to intense urbanization. 23o5 studio designed the house as a seamless transition between interior and exterior where the two are only separated by a set of iron shelves. influenced by the designs of traditional vietnamese houses combined with modern aesthetics, the result is a quite and peaceful space.

designboom has received these projects from our ‘DIY submissions‘ feature, where we welcome our readers to submit their own work for publication. see more project submissions from our readers here. 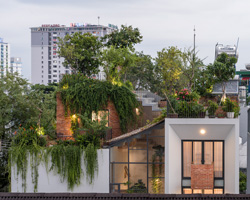 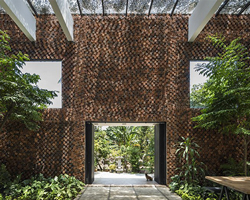 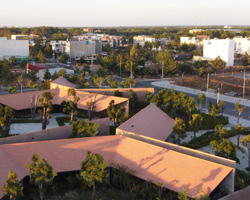 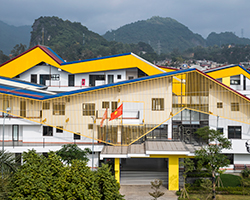 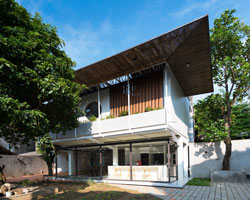 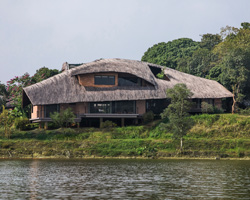 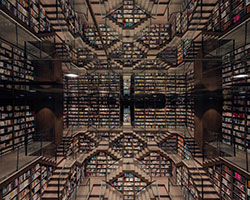 readers radar: discover how architecture in china is shaped by books

×
keep up with our daily and weekly stories
507,373 subscribers

keep up with our daily and weekly stories
507,373 recipients