green wave, construction of a swimming-pool in the thermal centre of royat

in the heart of the water city of royat, france and its green mall in the confluence of the tiretaine and liaboux rivers, is vincent callebaut‘s extension project – a dynamic response to the ambition of royat city to build a mobilization swimming pool represented by a very attractive and contemporary architecture researched by the patients of spas.

by increasing also the choice of cardio-arterial and rheumatologic cares, their architecture proposes the construction of a ‘planted wave’ that covers the pool hall under its curve. the ecological wave projects thus its curve towards the avenue de royat such as a new green setting, true urban signal dedicated to the welfare and laid out in the urban northern façade of the spa site. by meeting the needs of the programme as precisely as possible, our project emphasizes three major themes as detailed below: the urban signal, the welfare of the patients and the high environment quality.

from the avenue de royat callebaut’s project expresses thus itself clearly as a strong architectural signal leading the slightly austere line of the mineral façade laid out in bar  codes of extensions dating of the sixties to the eighties. their ‘green wave’ takes into account all the constraints of the site and presents a compact made-to-measure volumetry on stilts of the scratched surrounding frame. actually, the arched architecture of the pool hall sets up against the bank of the main building, lining up along the firemen lane to the laundry and the workshops located below.

the urban integration of this extension welcoming the mobilization swimming pool is made with simplicity and lightness. under this green wave, the fountain pool and the mobilization pool have both a circular shape for pools in this cramped setting-up context and on the other hand this shape enables the patients to take advantage of their cares with visibility equivalent for everybody towards the physiotherapists places at equidistance from everyone in the centre of the pools.

at the east of the parcel near the source, the volume of the hall stops at the implantation limit. but, in order to unify the architectures of the site together, the roof stretches itself and becomes convertible creating thus a whole height space and therefore easily reachable from the water source ‘auraline’ drilling head. the existing façade becomes an interior wooden wall pierced with portholes and horizontal bays behind which the incoming and outgoing changing rooms are laid out. the access to these changing rooms is made by two footbridges whereas a free space is laid out between the technical floor of the extension and the building to let the natural light penetrate on the 0-level of the current building by a glazed floor. a protecting cocoon dedicated to the welfare of the patients.

the atmosphere is warm, intimate and more relaxing. the thermal water of the stainless steel pools makes its gleams shimmer on the interior vault. at the east of the hall, the fountain pool with soft lighting of the zenithal cupola offers a view on the sky of auvergne to the swimmers. through the glazed and progressively printed eardrum to ensure intimacy, the view focuses on the arcade of royat viaduct. its linearity is punctuated by the majestic cedar of lebanon along the avenue des thermes. the mobilization pool located in the west of the hall profits by the piercing in screen wall of engraved wooden façade on the avenue, whereas the glazed eardrum offers a view on a teeming planted wall.

both pools are thus placed in a case of aquatic plants set in jardinières taking the exact shape of the curves with their contours and defining comfortable beaches. the incoming and outgoing changing rooms as well as the functional premises are linked to the other thermal activities by a moving and welcoming circulation well lightened by two planted patios. the patients are therefore protected and calmed in a glass and steel, wooden and green cocoon. under this interior hall, we feel like in the hull of a ship moored on a pier offering to the visitors’ imagination a naval architecture that invites them with sea colours wooded during the time of a spa care.

our ‘green wave’ project sets a case of nature on the avenue de royat. but on top of the ‘green design’, this planted roof ensures also through its inertia a great acoustic and especially thermal comfort inside the hall. this bioclimatic cushion will actually enable to reduce the energetic expenditure by accumulating the heat in winter and by ventilating naturally the hall in summer. at the bottom of the puy de gravenoire, it is thus a project of urban respiration, a micro landscape in the entity peculiar to the spa. it is a space of ecological regeneration not only offered to the patient of the spa but also to the common passer-by of the avenue de royat representing the dynamics and the ambition of the spa city to be part in the contemporary history of the inhabitants of royat. 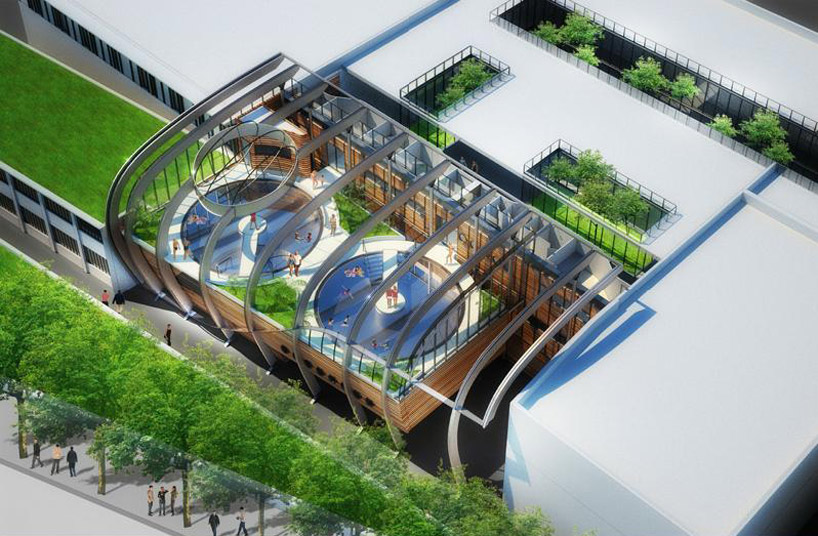 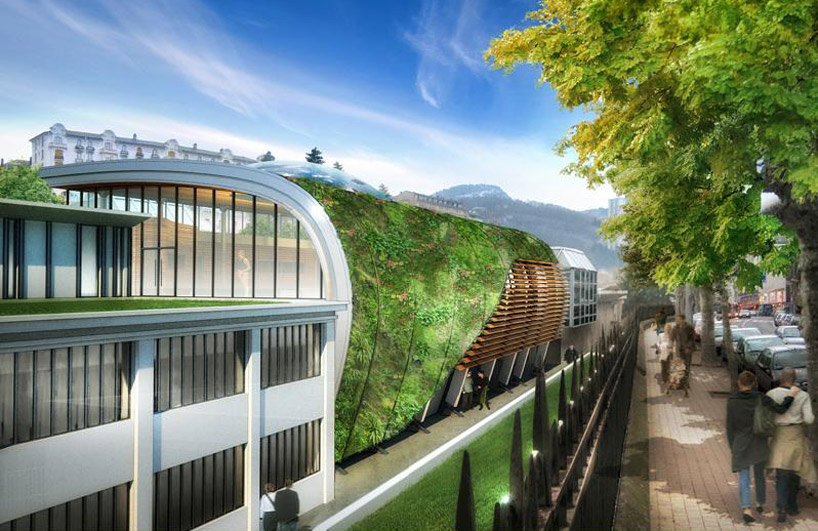 May 11, 2021
see-through pool casts rippling visuals in this greek residence by kordas architects 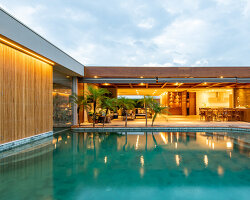 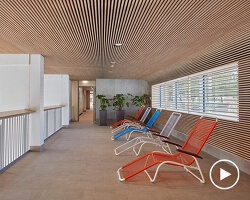 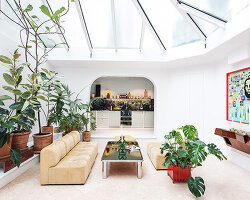 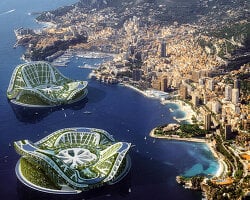 May 08, 2021
a timeline of new york's tallest buildings, from a wooden observatory to one WTC
starting in the mid 1850s, designboom traces the history of the city's skyscrapers.
architecture
771 shares
connections: +1790

May 06, 2021
frank gehry's philadelphia museum of art renovation is 'a reconstruction to the values of the original architect'
'the building is such an icon of philadelphia, it would be outrageous to think of trying to remodel the exterior of it,' explained gehry during the project's virtual press preview, attended by designboom.
architecture
966 shares
connections: +2870