visiondivision‘s eden falls is a proposal for the ‘vertical zoo’ competition organized by arquitectum. the brief was to enhance the constanera sur ecological reserve in buenos aires, argentina, which is a natural space of artificial origins situated on a large area of land reclaimed from the river. they asked that a versatile structure at least 100 meters high that functions as a home for animals and administrative services associated to the zoo be designed for the area.

visiondivision’s concept involves taking water from the river, cleaning it and pumping water through a system of huge pipes which acts as the zoo’s vertical structure. this water is constantly overflowing the pool on the roof which creates a waterfall on the entire façade concealing, the pipe structure and turns into energy at the basement level through the turbines and the main generator. the building’s self-generated waterfall also makes an air conditioning system redundant.

the structure is completely self-sufficient and can provide water and energy for other structures in the reserve or existing ones in puerto madero. it also becomes a unique and striking symbol for the constanera sur and the river.

through the middle of the building there is a core of circulation which has elevators and stairs moving vertically through the tower. the floors are used for various functions and are outcropped with views by the powerful water curtain. projecting from the structure are cantilevered footbridges which breach the waterfall where one can enjoy the views of the surrounding city and natural environment. 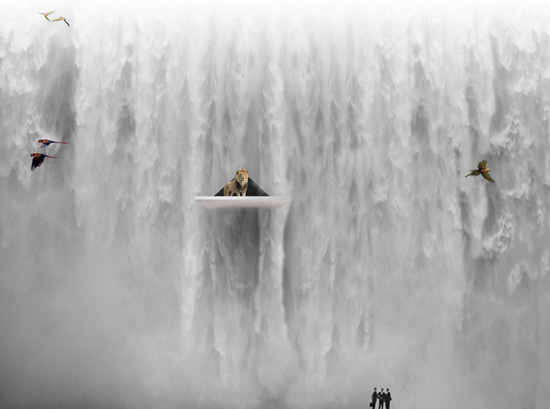 the flats for the animals have balconies which pierce through the waterfallone enters through the water curtain over a moat of crocodiles through to a lush patch of jungle where monkeys and tropical birds live. there is an office / administrative section with veterinary and food storage facilities.

there is a lower observation deck located on top of the offices where one can also ascend to the animal flats which are on the upper levels. animals are divided into individual flats based on species and housed with a selection of plants and vegetation which are suitable for them. flats also have balconies that pierce through the waterfall. animals such as monkeys and birds are free to roam the zoo at their own leisure.

view of an animal hall 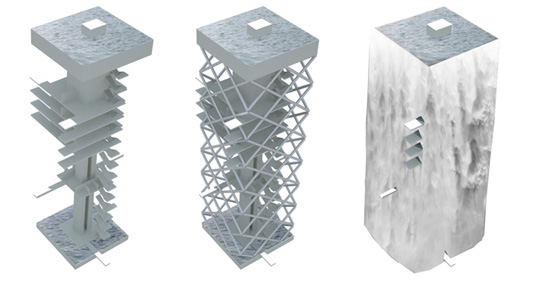 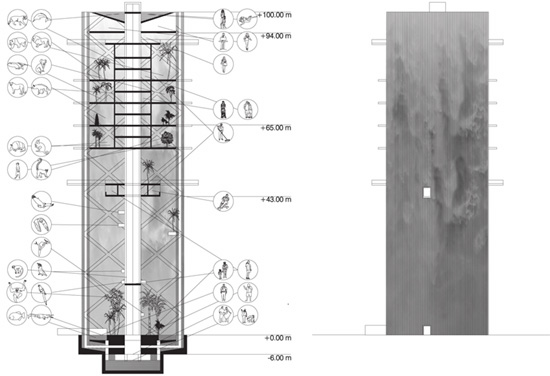 plan of the vertical zoo