interview with kengo kuma: 'the world is in a completely different era'

another proposal for the taiwan pop music center competition is starlight by visiondivision.

the new pop center in taipei is a city in itself. visiondivision’s design is meant to transcend visitors to the center in a total escapism of pop. the main enclosure, is made up of different districts which create a city framework within. here, the walls will not only acts as noise barriers, but as tools of communication. a central tower projects light to different parts of the town, as stage lights or to enhance the center’s ambient setting, benefiting each district with streams of colored light – the tower designed according to the specific angles of light it sheds. the focal point of the lights transform the appearance of the complex – from a distance, a low key structure turning into a body of light, creating a unique landmark for this developing part of taipei.

within the complex there are five main districts: the star district, the outdoor arena, the live houses, the commercial district and the main hall.

the star district will be host to offices and rehearsal studios, housed in a large, flexible area, that can easily change according the specific needs of the space. all of the offices and studios can be reached internally through surrounding walls. the star palace within features a hotel for the artist’s entourage on the first three levels. the upper level is a penthouse suite for the guest artist with a pool overlooking the whole complex, formed in the shape of a glass bowl that is illuminated by the light tower. 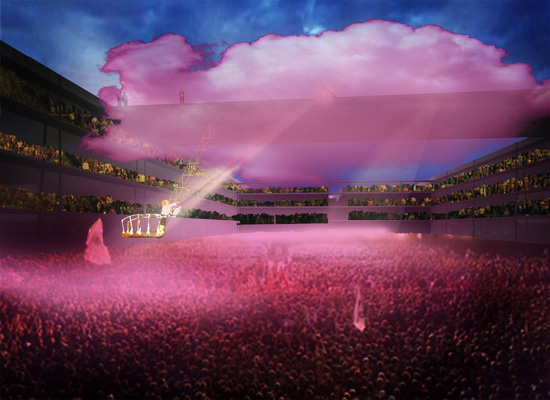 the outdoor arena is a plane surface surrounded by walls which has three levels of balconies on each side. hovering over the space is a rig outfitted with smoke machines, disguising it as a cloud. it is mounted on a rail with a light and sound system anywhere in the arena area, either as a roof for the artist or as a separate feature emphasizing the show. when the arena is not being used as a concert venue, it can serve as a big square for markets, shows, parties etc. 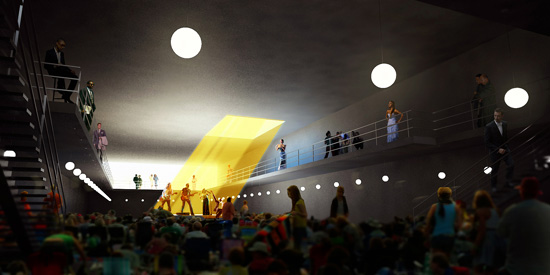 the live houses are centrally located, connecting the outdoor arena to the commercial district. with a hovering outdoor live house along with small and big scale indoor ones, each live house is scaled and characterized differently for the various performances. one of the features is that all live houses, excluding the smallest ones, have holes punctuating the roofs to allow the light projections from the main tower to reach each of the individual scenes. between the live houses there is a park for recreation which has a projection wall for the tower to display music videos or other moving media. the houses are arranged in such a way that they can be reached separately from the outside of the complex for easily controlled night activities. 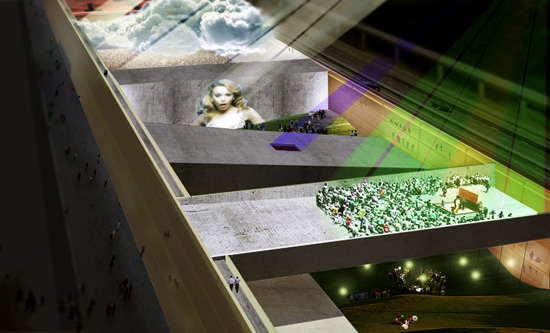 aerial view of the live houses and the park situated below 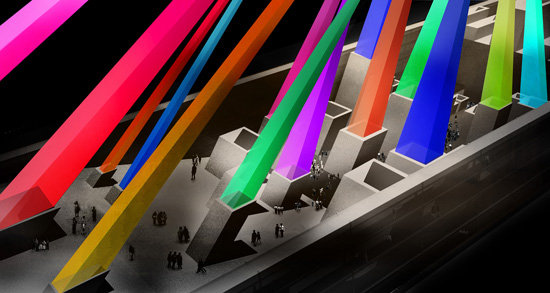 the commercial shopping district of the centre

the commercial district consists of the central square with the tower, the hall of fame and a cluster of bars and shops which continue up the sloping roof terrace of the main auditorium. the main square is an important entry point to the complex within close access to all public events. in the middle lies the landmark tower, controlling the ambiance for the whole complex. the hall of fame is easily accessed via the main square and hosts a collection of pop memorabilia as well as permanent exhibitions. 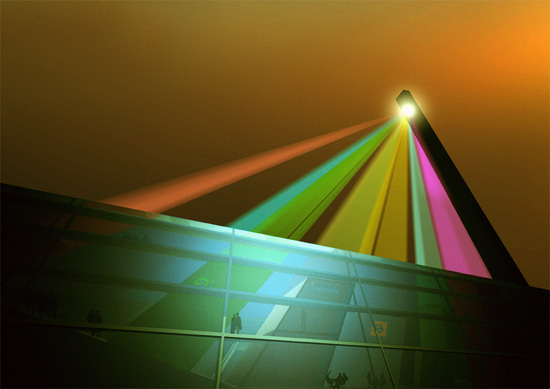 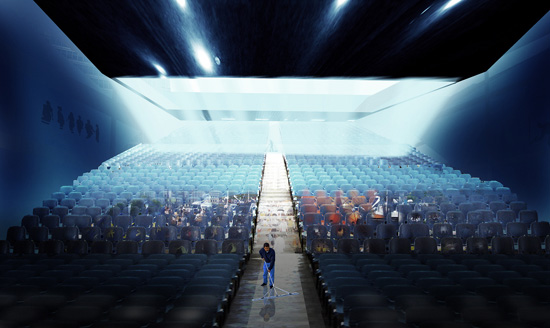 the main auditoriumthe main hall provides the concert experiences, with large punctuations in the roof for the tower projections to light up a large part of the hall. the sloping spectator area is made out of glass beams which transmit light out onto the auditorium plaza, creating a light infused foyer for arriving crowds. the auditorium foyer / square is protected from rain by a large overhang and acts as a connection hub for pedestrians, with interlinking footbridges, guiding visitors to their desired floor level. the roof of the auditorium is a terrace which slopes down to the commercial district with views over the whole centre. 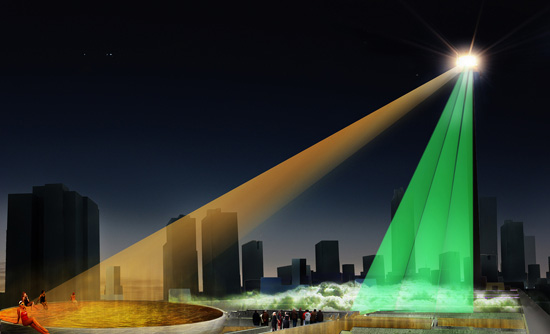 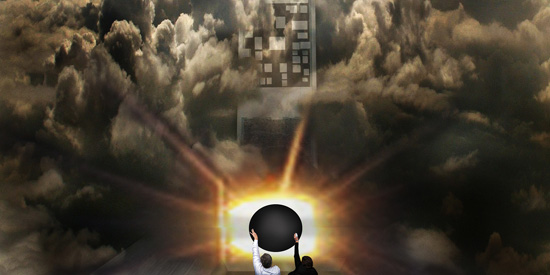 star light from the tower 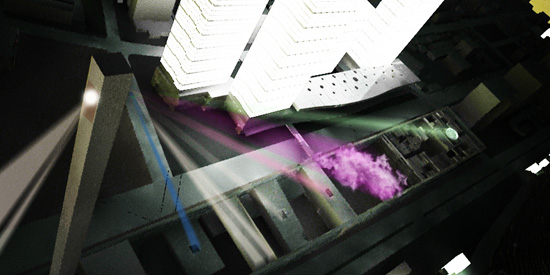 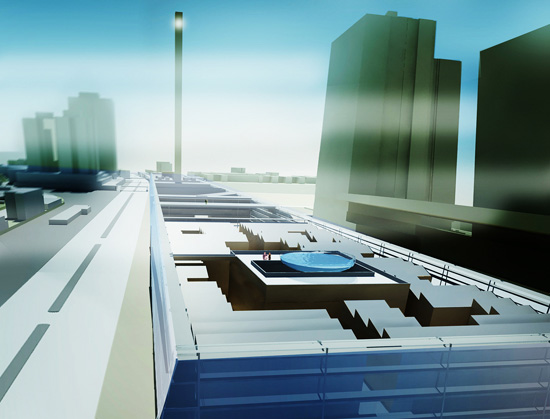 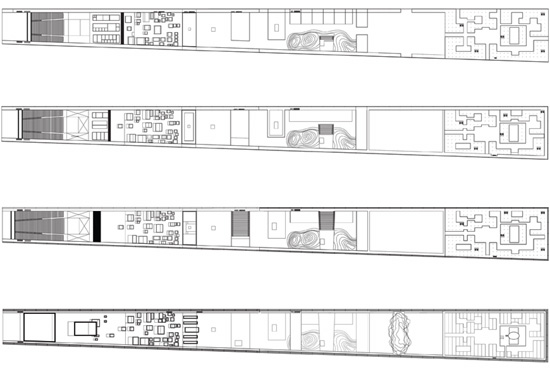 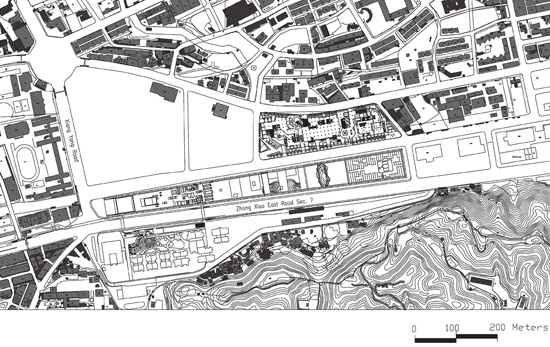 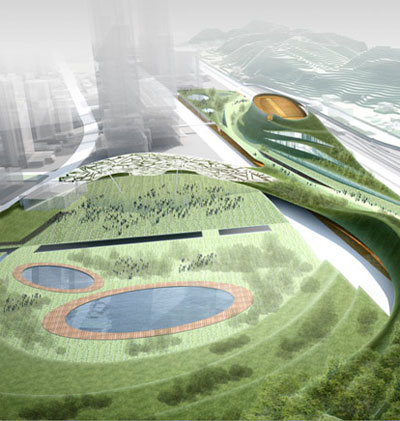 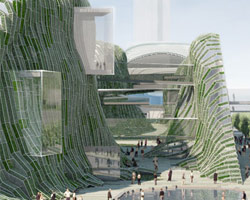 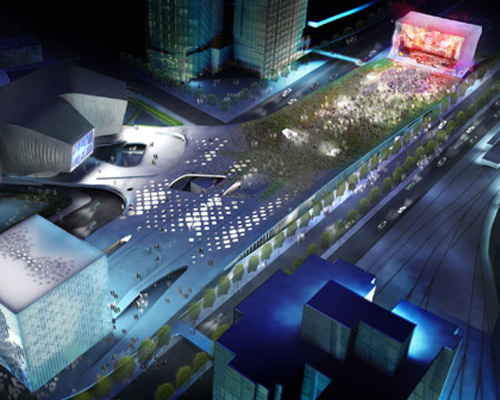 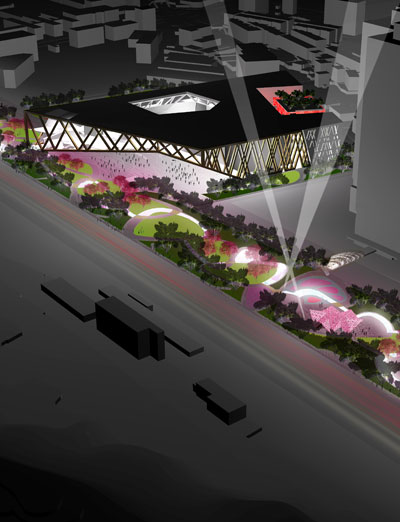 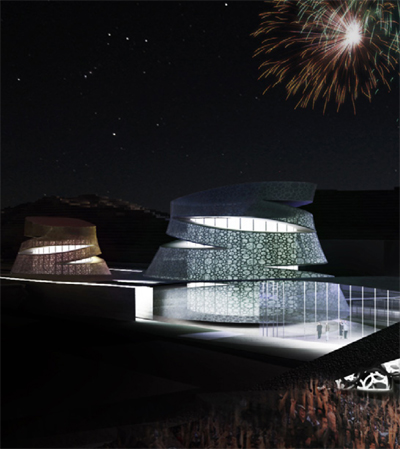 Jul 13, 2021
designboom visits AMDL circle in milan
'I always think of myself as an architect, a designer and an artist; I also write, I take photographs, I teach. in my opinion, all these activities have just one true aim: to create a better environment and to enhance life,' michele de lucchi tells designboom.
architecture
451 shares
connections: +130