completed by architect noah walker and his team at walker workshop, the 1966 carla ridge house in beverly hills offers a dramatic and extensive view of los angeles to the east of this hilltop parcel. rather than spread a sprawling, twenty-thousand square foot house across the entirety of the lot, the architects envisioned the residence as layers stacked on top of itself in opposite directions. this type of layering aligns the upper residence into a pair of parallel dwellings, like rotated wings whose ends point outwards into the view while their longer earth-bound axes establish a horizontal visual frame. 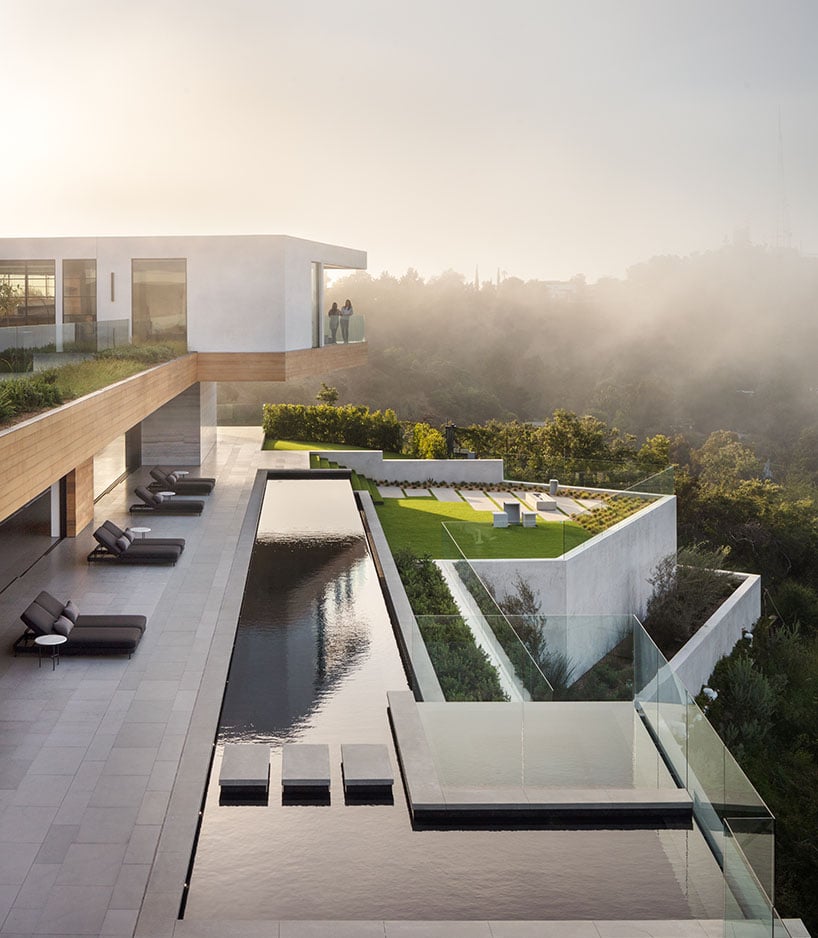 the team at walker workshop placed the most lived-in parts of the project – the kitchen, dining room, and entrance –  in the main body of the house, between the parallel wings. this main body frames the landscape and horizon, creating a sense of infinite openness. ‘one isn’t merely standing in the kitchen, but standing in an unobstructed panoramic view of los angeles, dotted with unmistakably familiar landmarks: the rolling hills of los angeles, the iconic hollywood sign, the griffith observatory, and even the larger humbling angeles mountains not so far off in the distance’, share the architects. 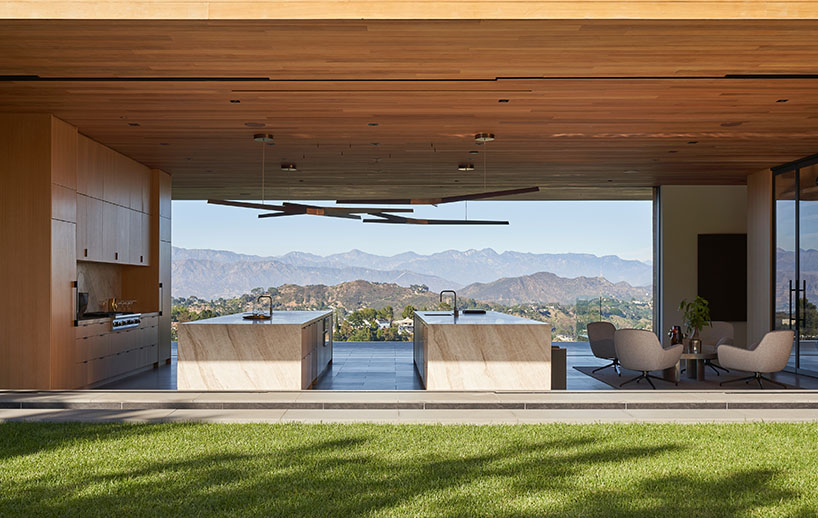 the overhanging jutted wings of the house can be reached by ascending heavily exposed concrete walls that capture the natural light cascading in through a skylight. even more, the movement of light throughout the day acts in concert with the raw surface of the concrete – illuminating the complimentary nature of opposing textures on display. the stairs leading to the upper parts are clad in oak, with a seamlessly embedded oak handrail. once at the top, it becomes apparent that both wings that feature large cantilevers hover over the hillside as companions. 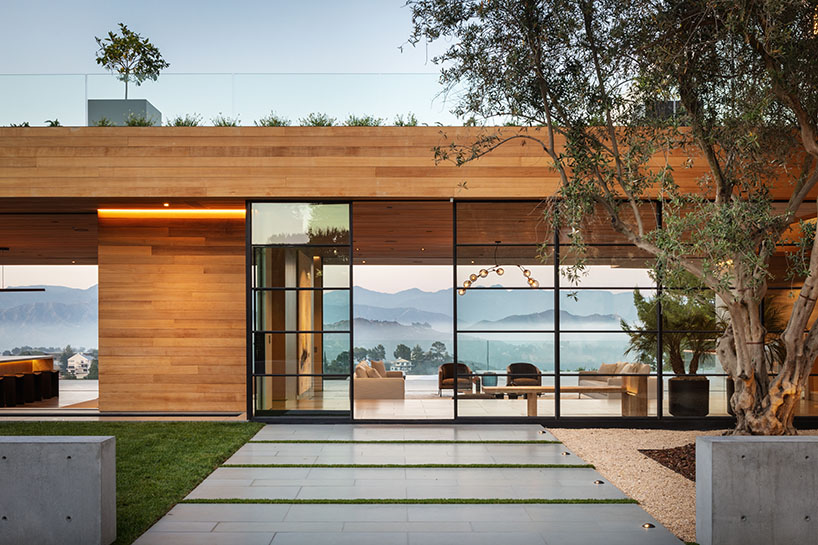 connecting within, and without

the lower section, the base of the home, is clad in western red cedar siding and provides a warm touch of unassuming balance to the overall magnitude of the home. the architects used the same wood to outline the different levels of the house – creating a pronounced dynamic that splices through the visual plain. meanwhile, the second story appears hoisted upwards through contrast while the basement remains harmoniously stationed and embedded within the ground. atop the center of the body is a connecting space – a 2,000 sqft bridge on which residents can walk across  to get from wing to wing, turn into a garden if they so choose, entertain, watch outdoor movies on a projector, or simply stargaze. 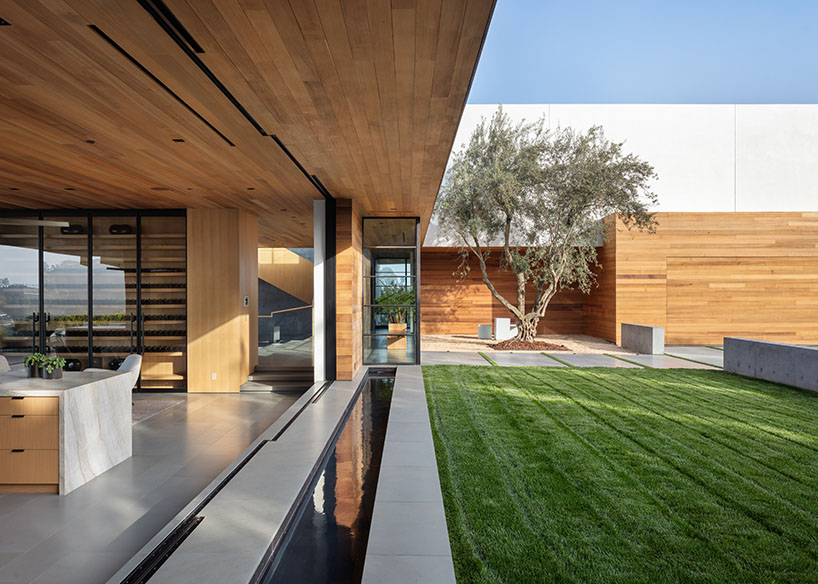 in the front yard, upon entry, a 4 ft reflecting pool encircles the front entrance while an 84 ft infinity-edge lap pool and deck occupy the back side of the house where the panoramic view can be enjoyed. this infinity pool also defines the edge of usable land the project occupies. 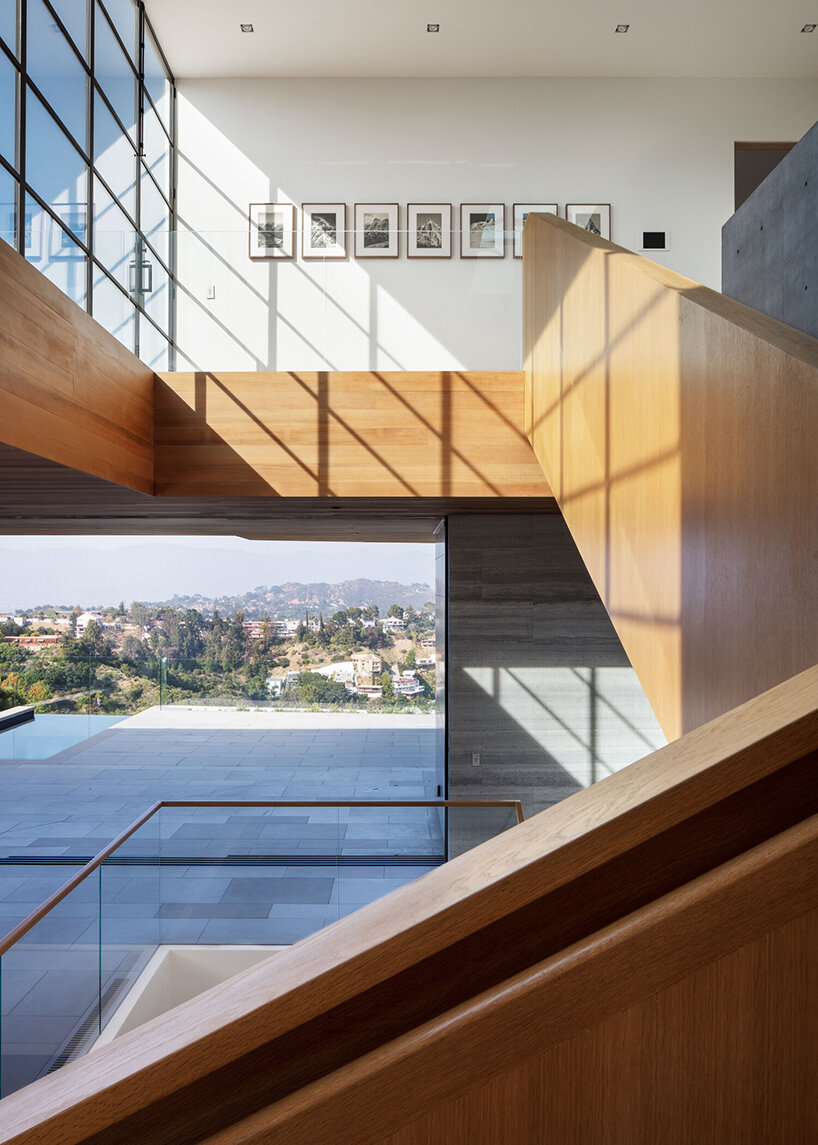 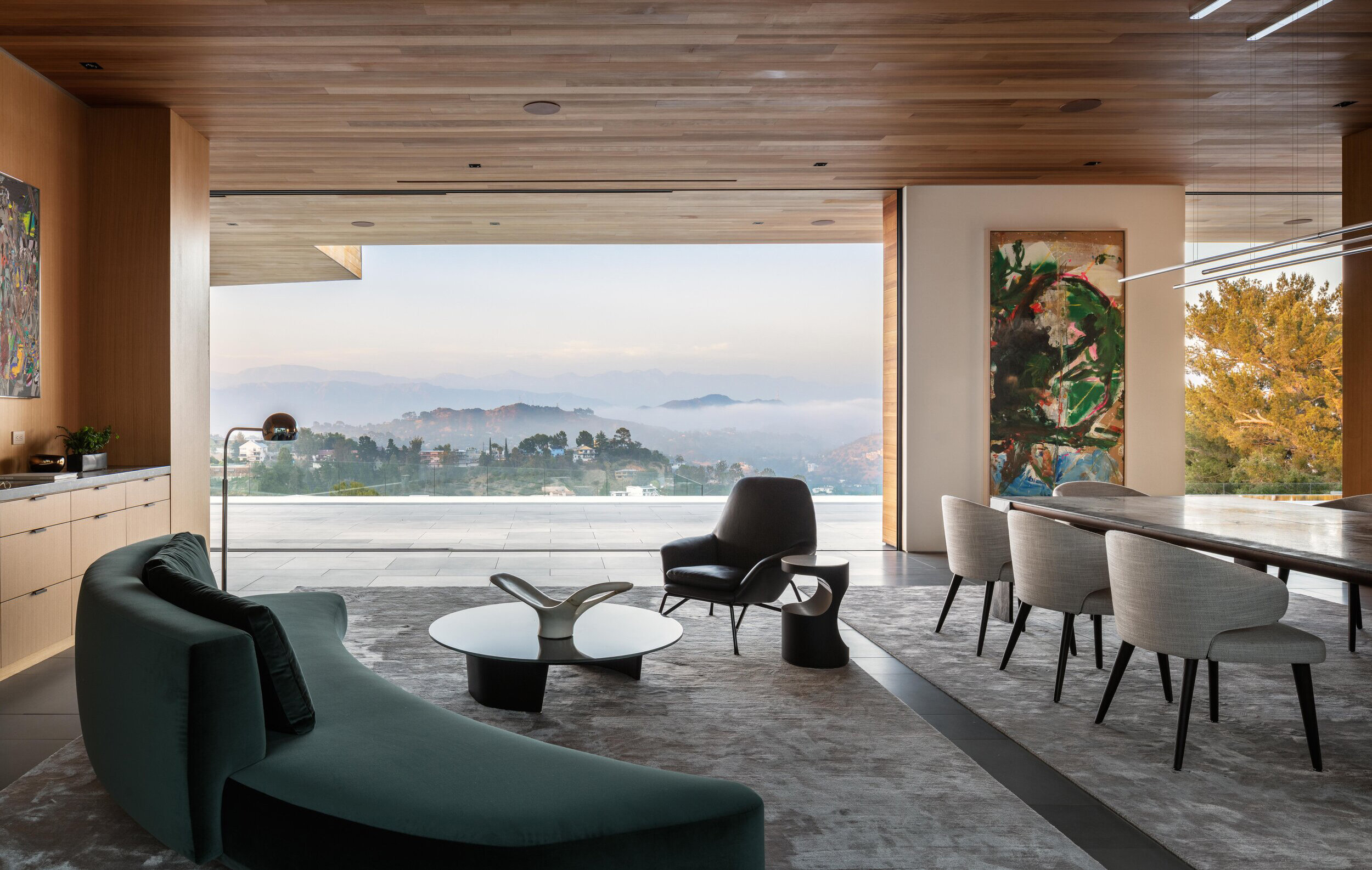 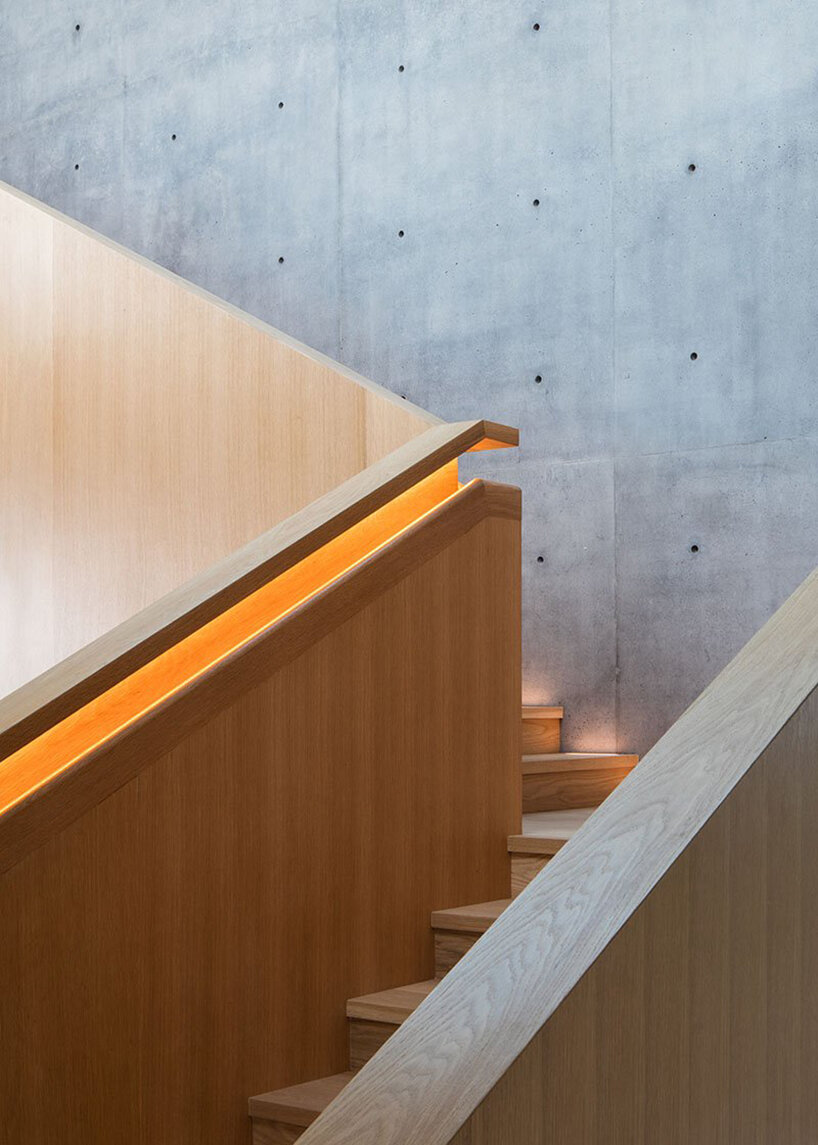 a dramatic contrast between the concrete wall and wooden staircase 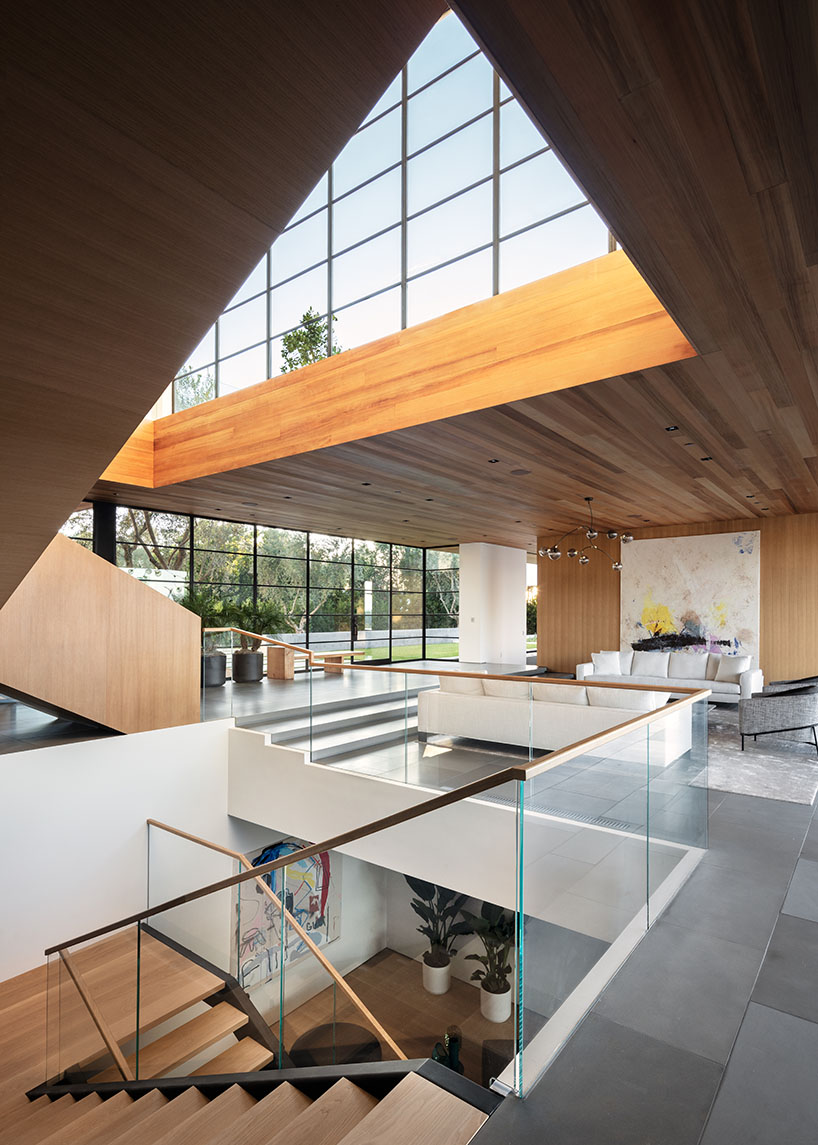 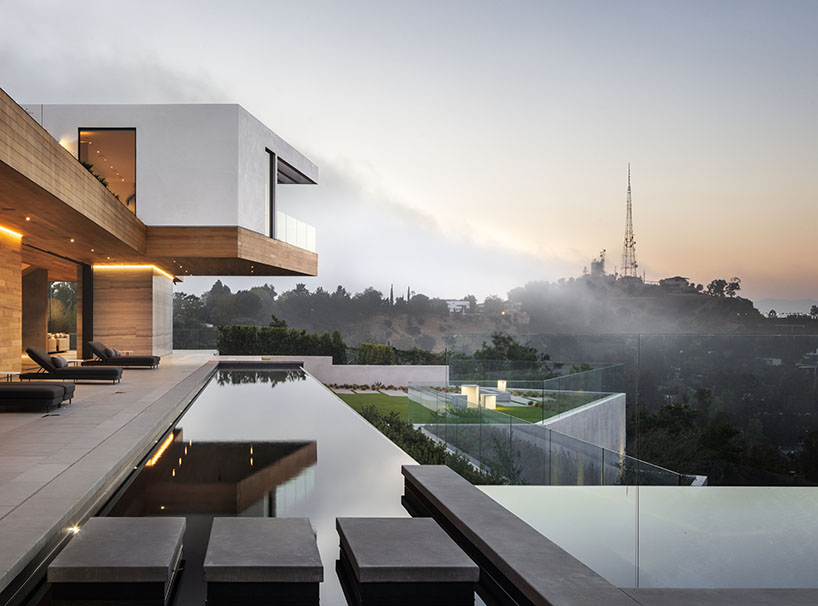 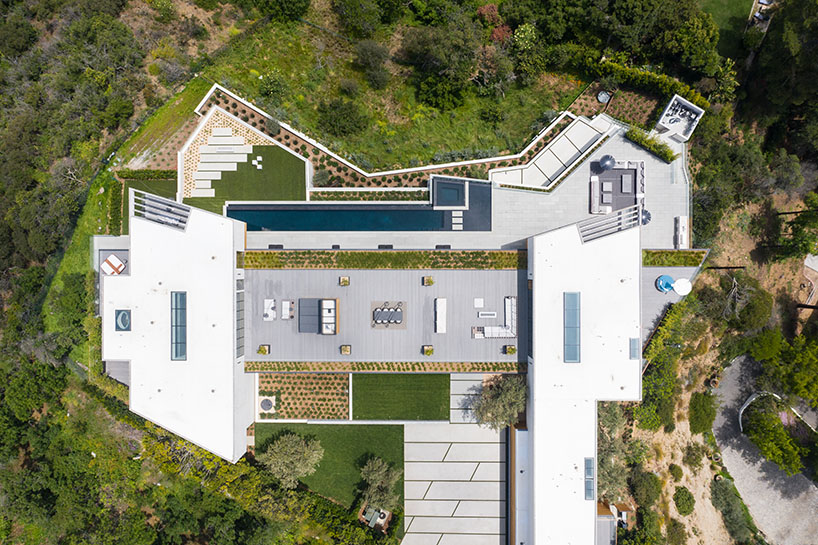 top view of the project, emphasizing the wing-like jutted structure 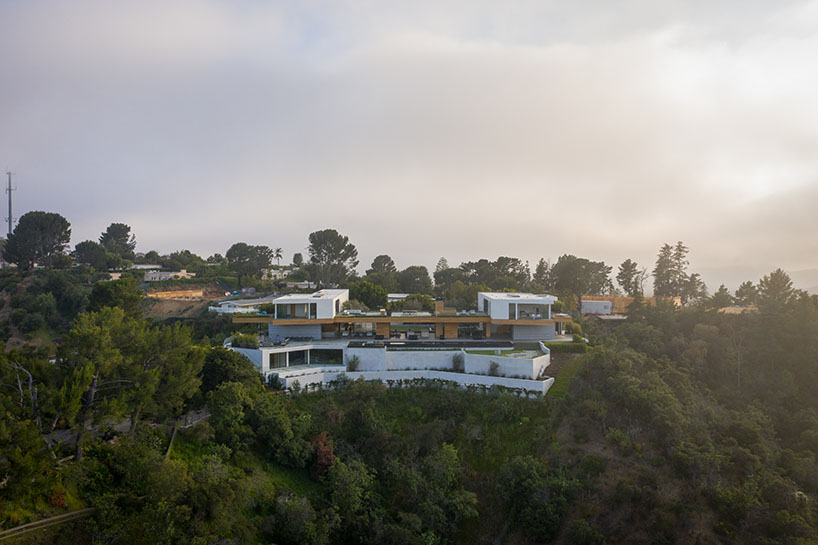 the residence sits on a hilltop parcel in beverly hills