located in the southeastern part of guizhou province, the shui cultural center is a gateway to sandu county, the land of the shui. this community is one of the ethnic minority groups in china, most of whom live in guizhou — where west-line studio works exclusively — which is why the office pays special attention to researching minority cultures and traditions in order to bring some of their particular elements into the design. 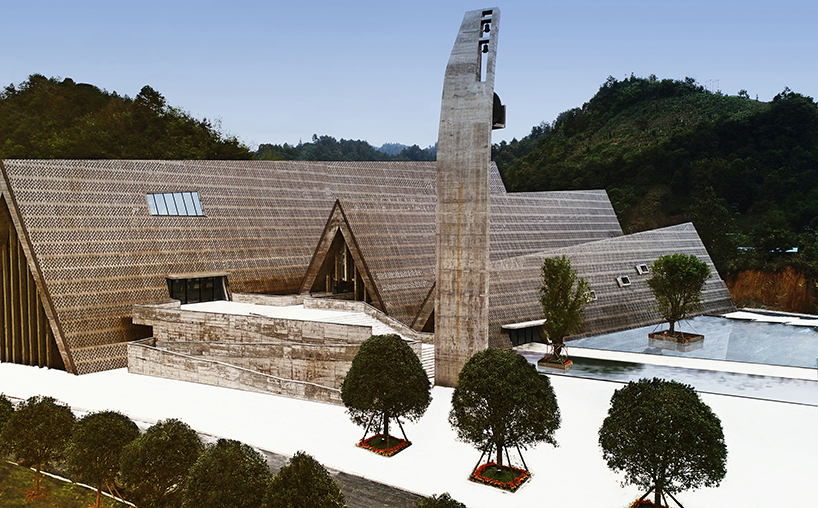 aerial view of the shui cultural center in sandu county

despite being few in number, the shui people have still retained their own language, together with their unique system of pictographs. they have around 400 characters used mostly during ceremonies and sacrifices. the iconic shape of chinese based west-line studio‘s cultural center pays homage to the shui language, following the shape of the character for ‘mountain’. the facade pattern is also inspired by their traditional characters, starting again from the basic triangular shape of the mountain, which is repeated to evoke the character for ‘rain’. 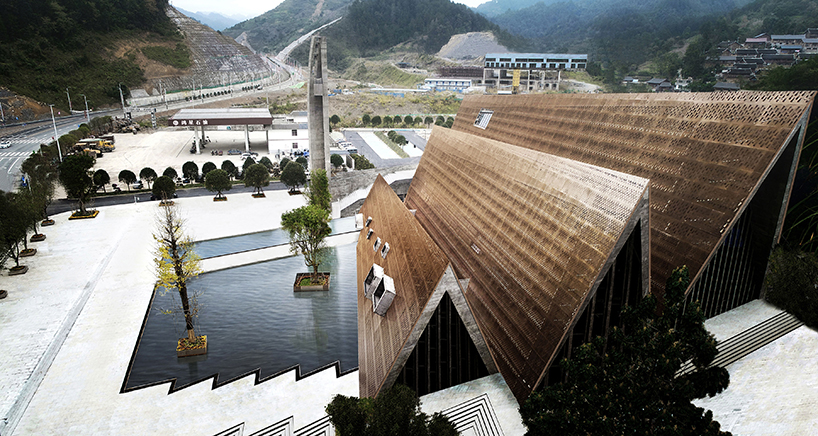 the site, which covers an area of 13,800 square meters, was created by a bend in the river, so it is surrounded by water on three sides. on the other, the west side, a water square welcomes the visitors guiding them to the entrance. shui means water, which is why this element is so relevant for both the site and project. north of the water landscape is the yulong tower, with a bronze drum on the top. 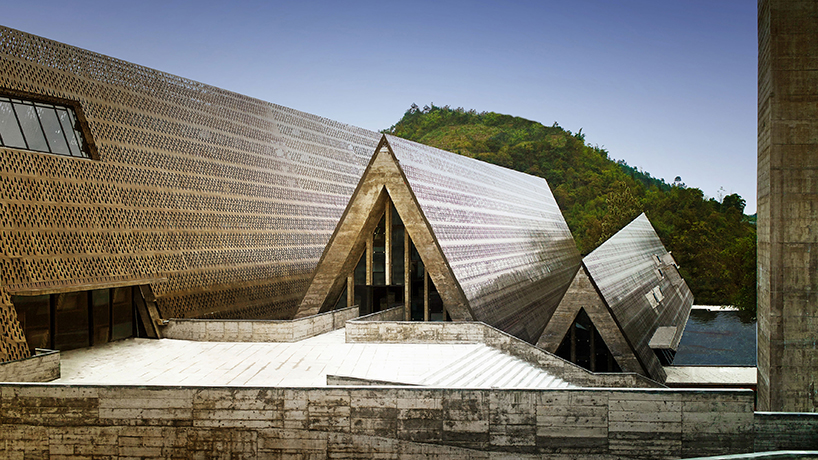 this image pictures the north entrance to the second floor

the drum, cast in bronze, is a typical ritualistic element in shui culture. bronze can also be found in their altars, which inspired west-line studio to use perforated bronze steel plates to cover the building. the pattern makes the plates lighter — a thin skin which creates a contrast with the heavy concrete structure — breaking the sunlight to create a dramatic effect once inside. the concrete is marked strongly by a wooden pattern, given by the pine quarterdecks. pine wood is one of the most common materials in the sandu region and the contemporary concrete structure echoes the local traditional wooden architecture. 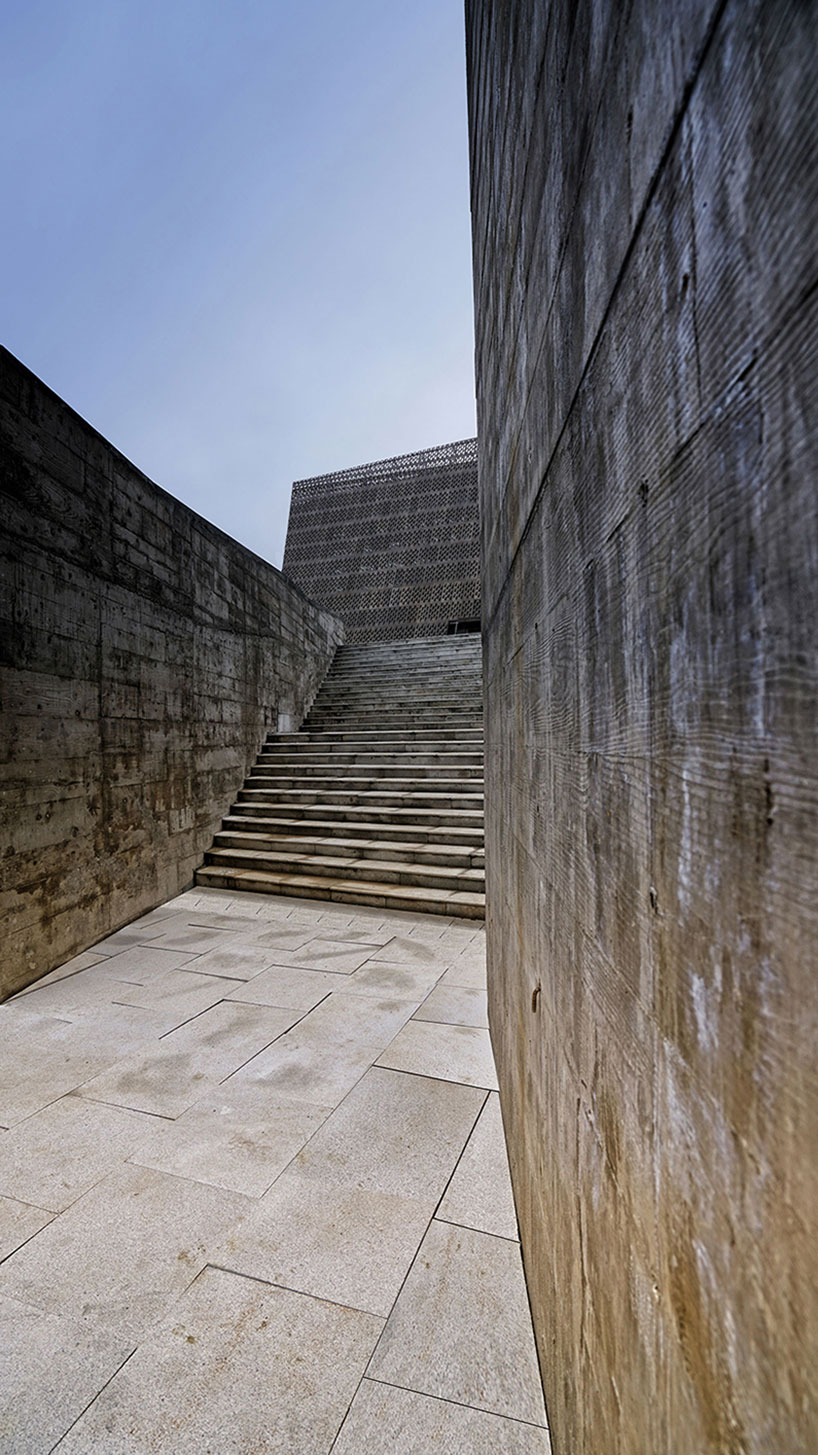 the concrete is marked strongly by a wooden pattern, given by the pine quarterdecks

the building itself consists of three main stripes, which combine all the functions of the tourist-cultural center. the first is the ritual hall, which with its sharp edges, strong colors and narrow space aims to create a strong first impression on visitors, who are clearly stepping into a different dimension. 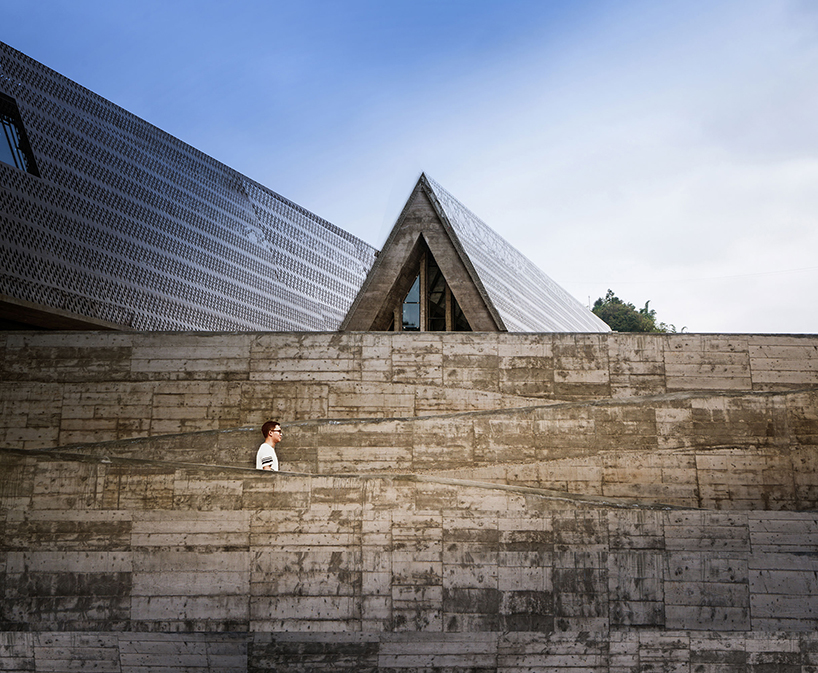 the second stripe still keeps the sharp roof but welcomes visitors with less dramatic tones and serves as reception hall. in the third stripe, which has two floors, at the ground level we lose the pitch roof to find a more conventional space that includes all the main functions — visitor and service center, cafeteria, toilets, business center and an upstairs office area. 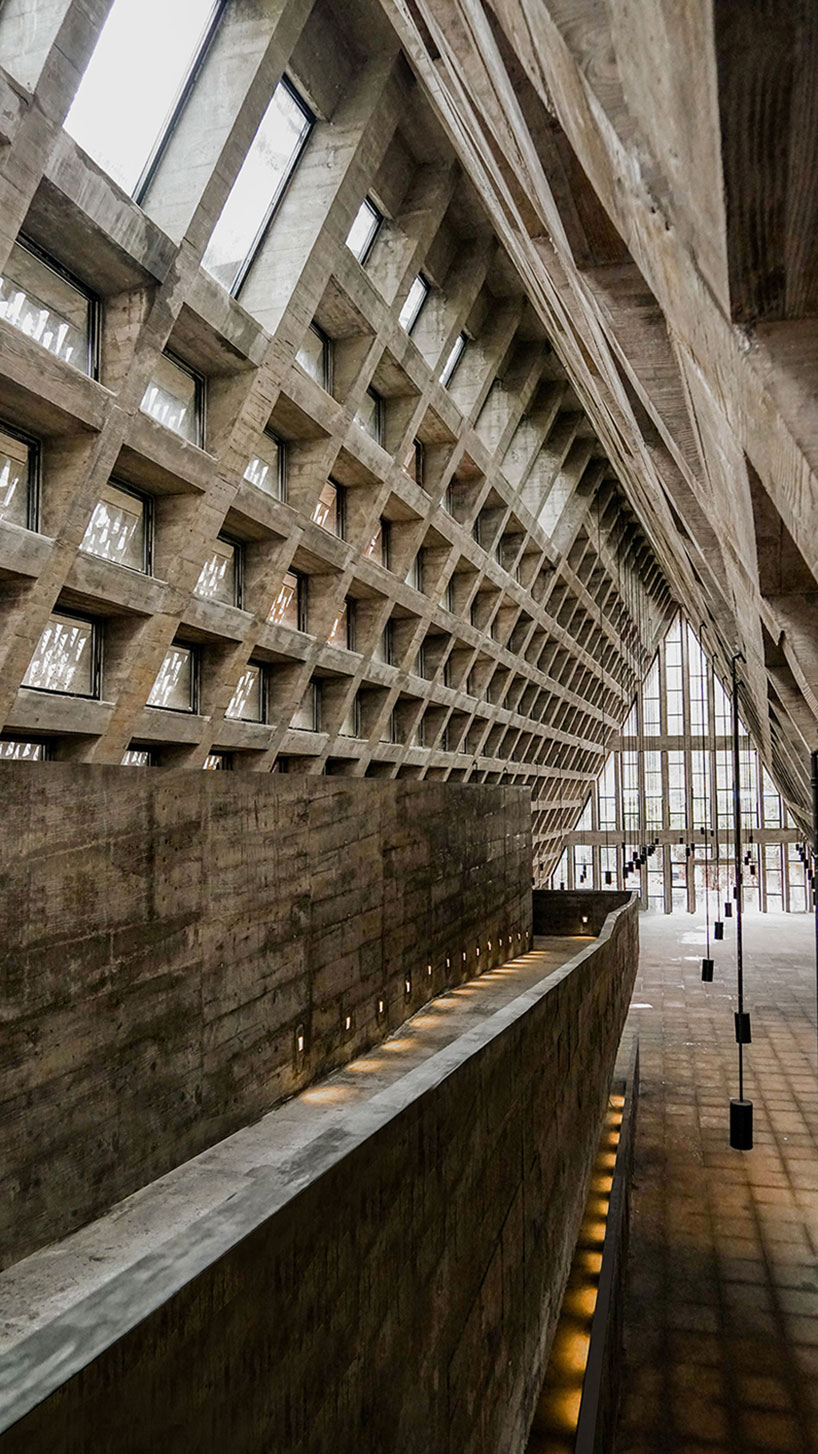 the second stripe serves as a reception hall 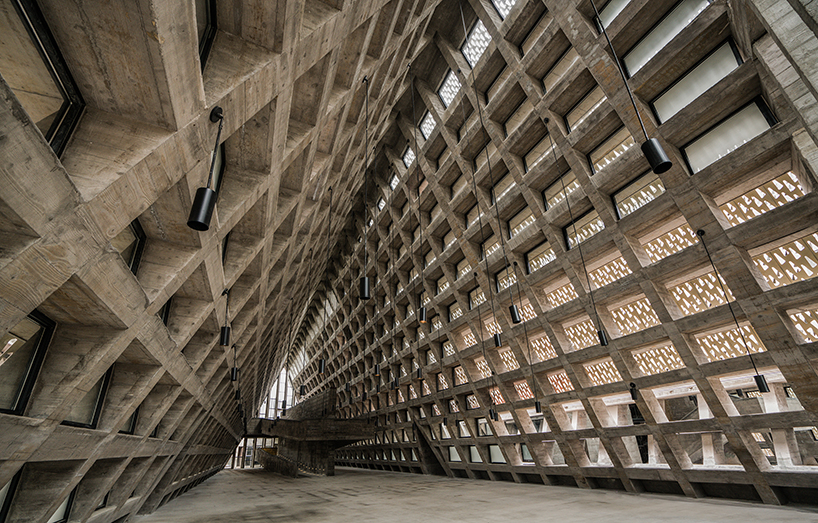 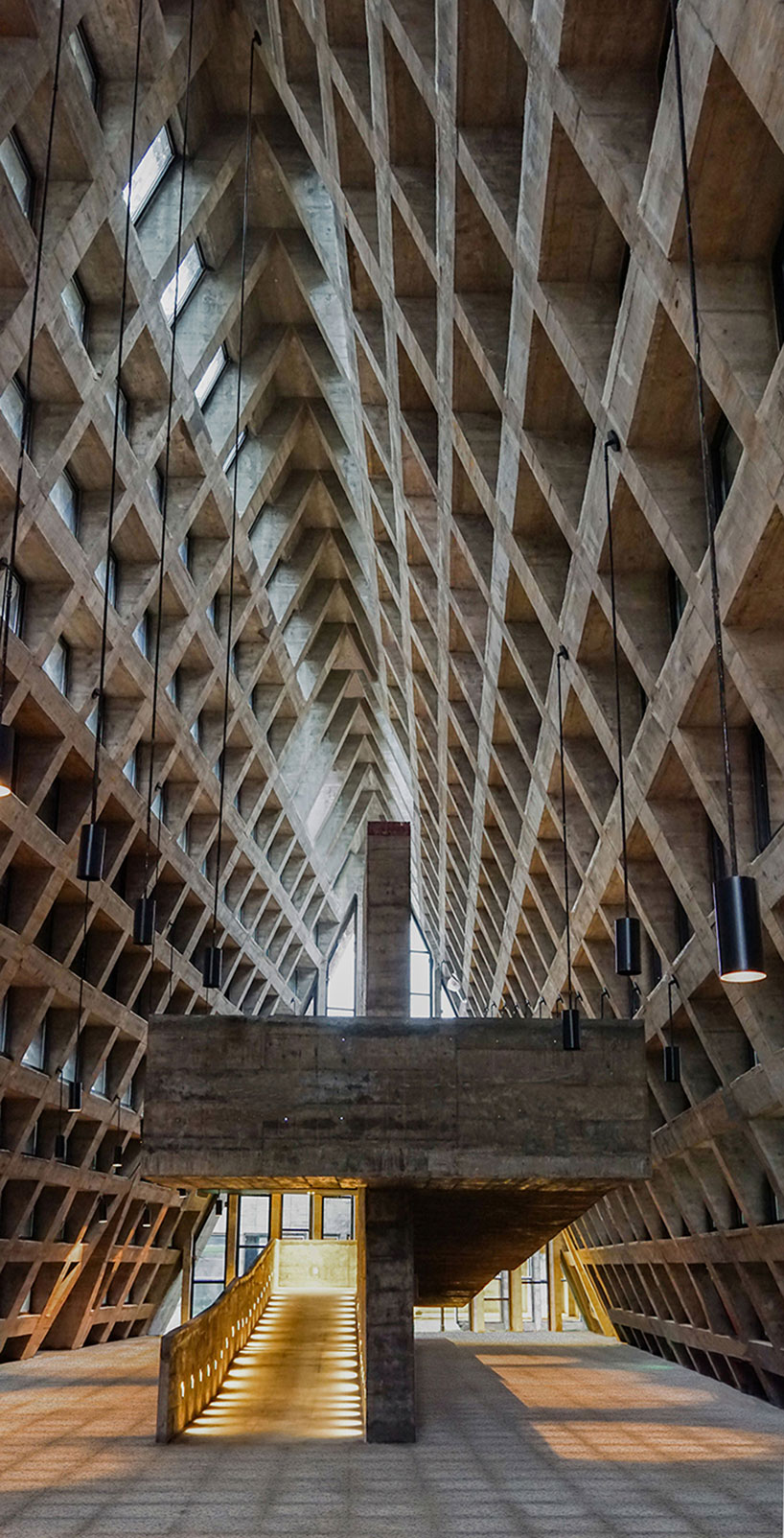 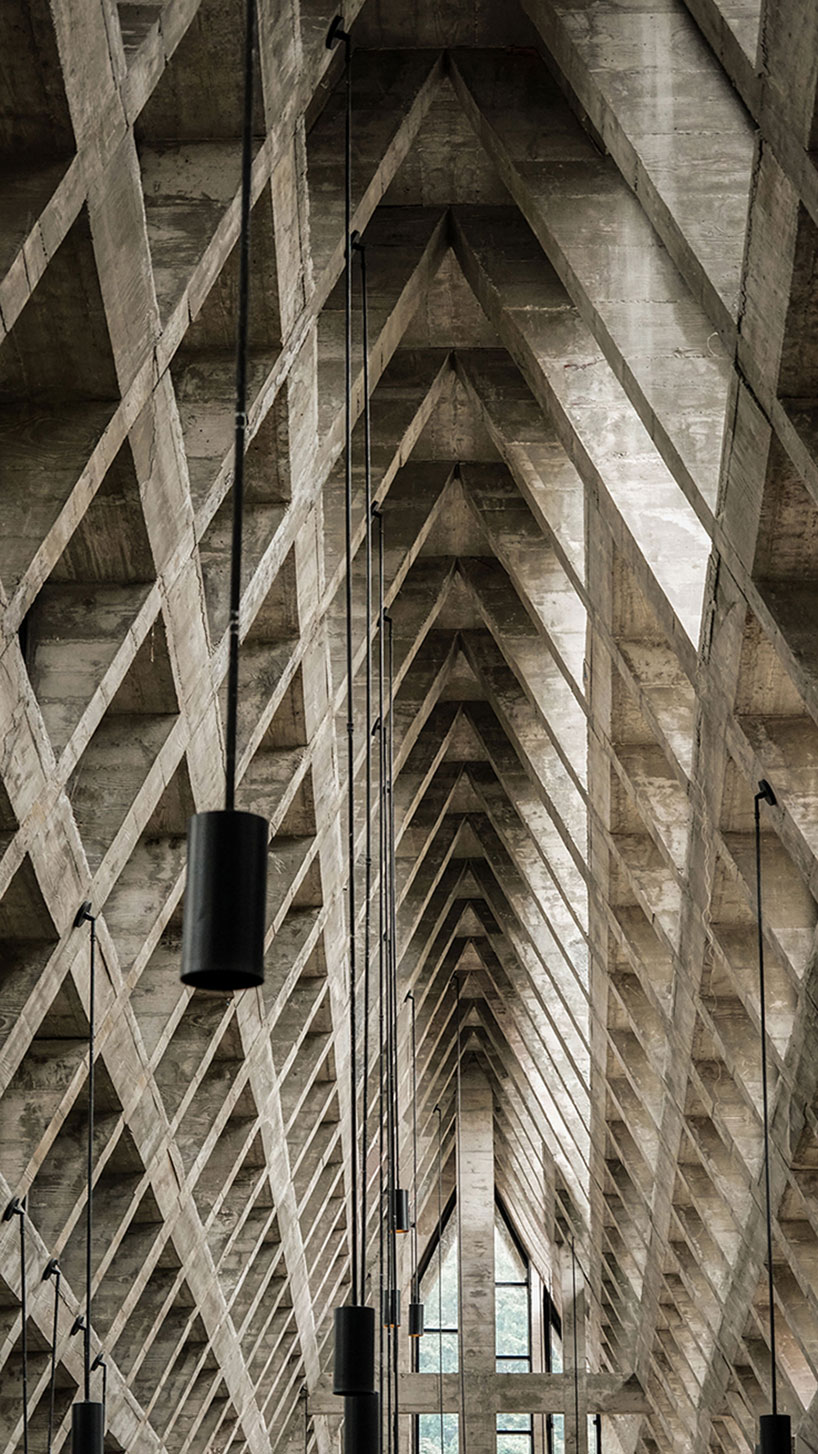 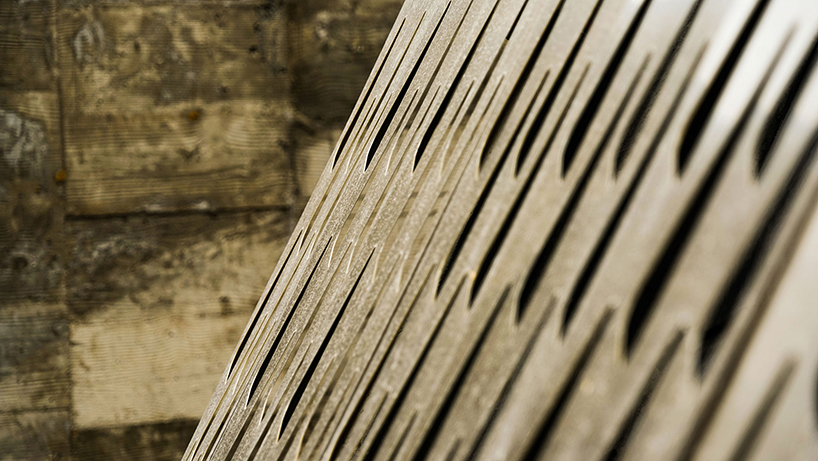 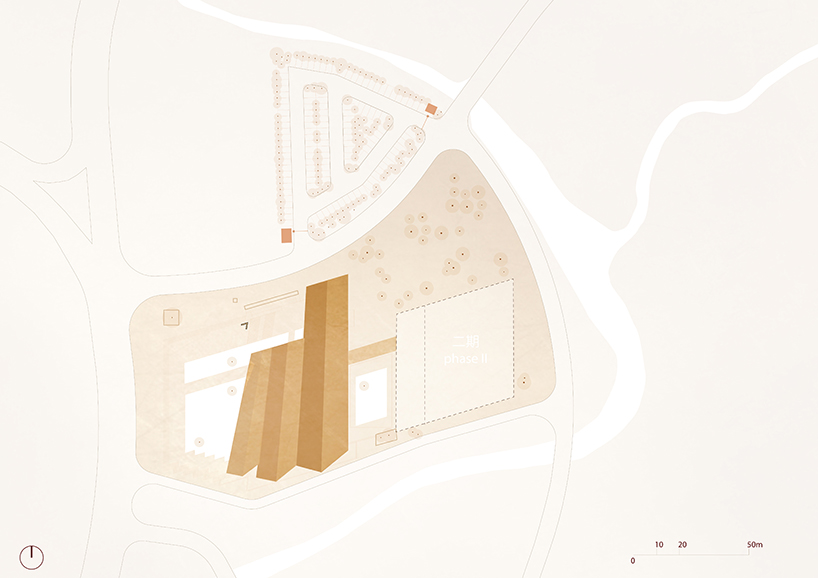 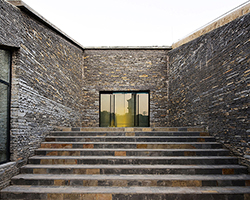 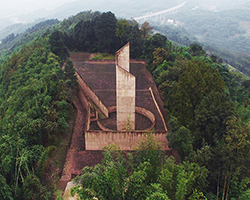