in 2013, C.F. moller architects revealed plans to build a 34-storey wooden skyscraper in stockholm. since then, a number of innovative projects have been released, some conceptual, while others are currently under construction.

timber has recently undergone somewhat of a revival. unlike concrete and steel, wood is a renewable resource, which can often be obtained for a comparatively less cost. other proponents of the material point to shortened construction timescales and a reduction in the building’s overall weight. the application of new technologies also means that when wooden buildings are subject to fire, they now compare favorably against concrete and steel structures.

the world’s current tallest timber building is a 14-storey apartment block in norway, but for how long will this record be held? below, we take a look at some of the most recent tall timber buildings, both planned and proposed around the world. 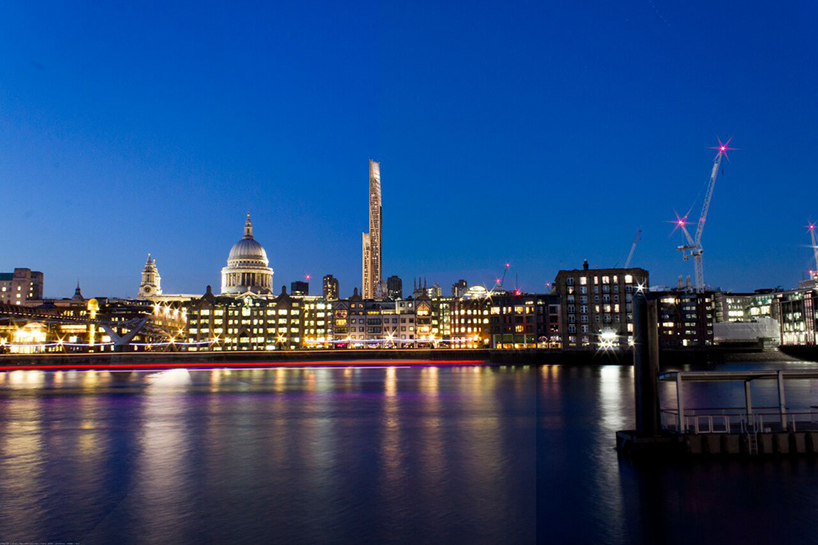 in april, proposed plans were revealed for an 80-storey, 300 meter high wooden building integrated within london’s barbican centre. the scheme was developed by researchers from cambridge university’s department of architecture alongside PLP architecture and engineers smith and wallwork. their brief was to consider the future development of tall timber buildings in central london. if realized, the project could create over 1,000 new residential units. ‘if london is going to survive it needs to increasingly densify,’ says dr michael ramage, director of cambridge’s centre for natural material innovation. ‘one way is taller buildings. we believe people have a greater affinity for taller buildings in natural materials rather than steel and concrete towers.’ 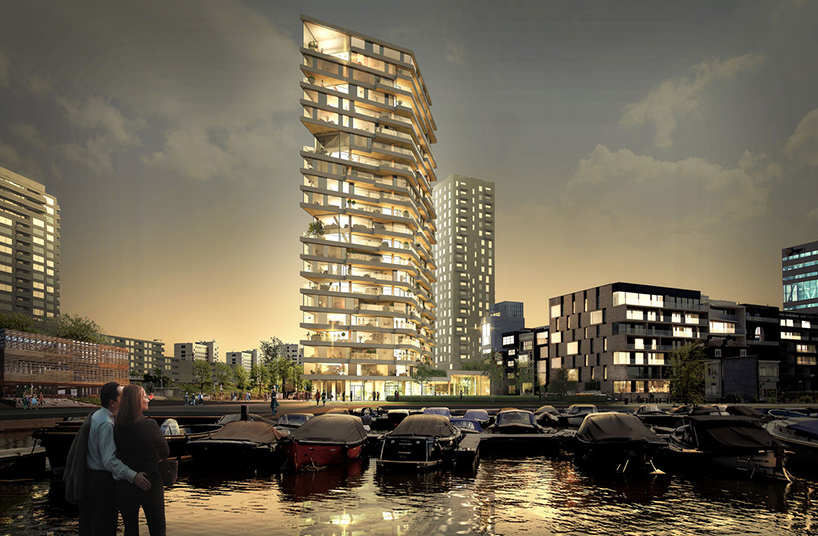 recently, arup was selected to develop ‘HAUT’, a project in development which — at 21 floors — would become the highest wooden residential building in the world. designed by team V architectuur, the 73 meter scheme is to be constructed in amsterdam and will include 55 apartments, public plinth hortus bicycles, and an underground car park. it will have a total gross floor area of approximately 14,500 square meters and is set to receive the BREEAM outstanding label — the highest possible sustainability score. ‘building in wood is one of the most talked about innovations in sustainable construction internationally, due to the large storage capacity of carbon dioxide,’ explains arup. the design also offers the first buyers freedom of choice in terms of dwelling size, number of floors, and the location of rooms, outdoor spaces, and voids. 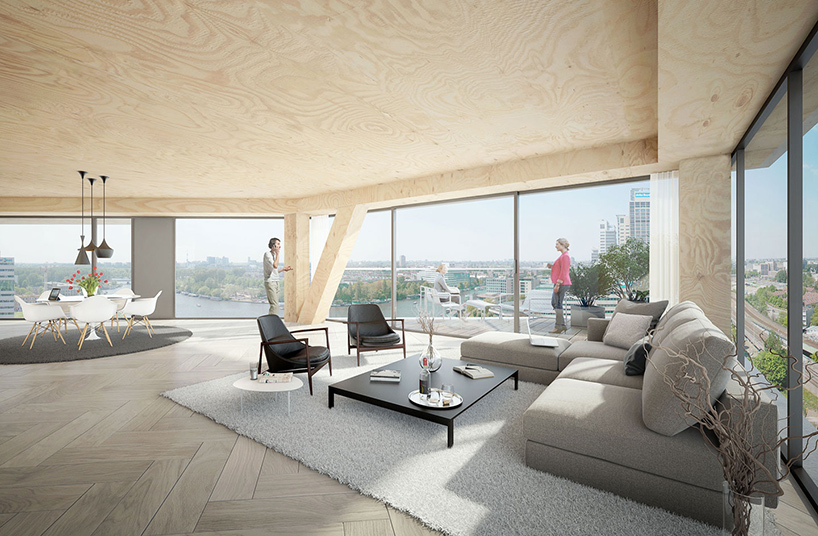 trätoppen — a 133 meter tower made from cross laminated timber 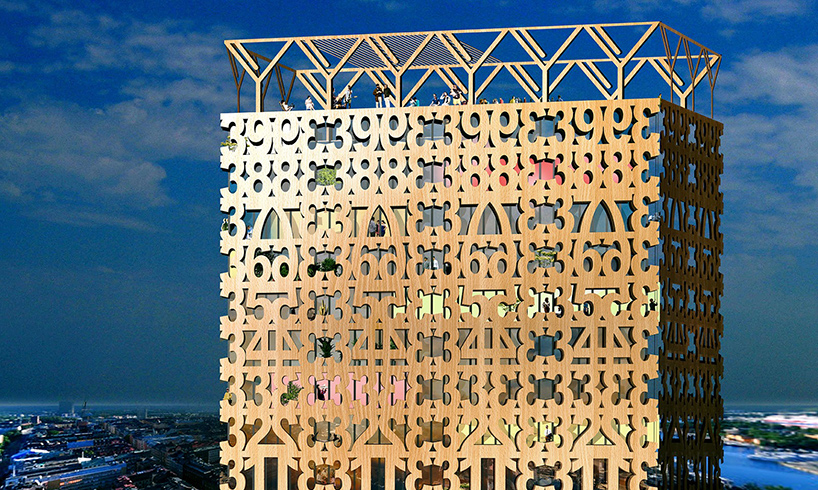 anders berensson architects was commissioned to design a skyscraper to replace an old car park in stockholm’s city center. the proposed 40-storey scheme has been conceived using cross laminated timber, with a pattern of numbers applied to the structure’s distinctive façades. externally, floors can be understood by simply reading the number on the building — similar to the concept of a parking garage. the cladding also has some practical benefits, serving as a sun screen that keeps the building cool and energy efficient. ‘if we want to reduce the amount of cars in the city center of stockholm and at the same time make space for more housing without building on green areas, then replacing car parks with housing, shops and restaurants feels obvious,’ explains berensson. 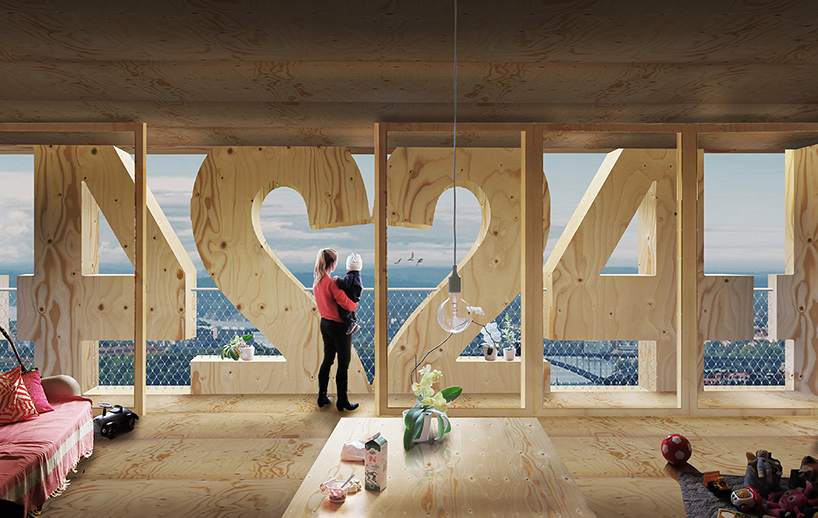 brock commons  — a mass timber building under construction in vancouver 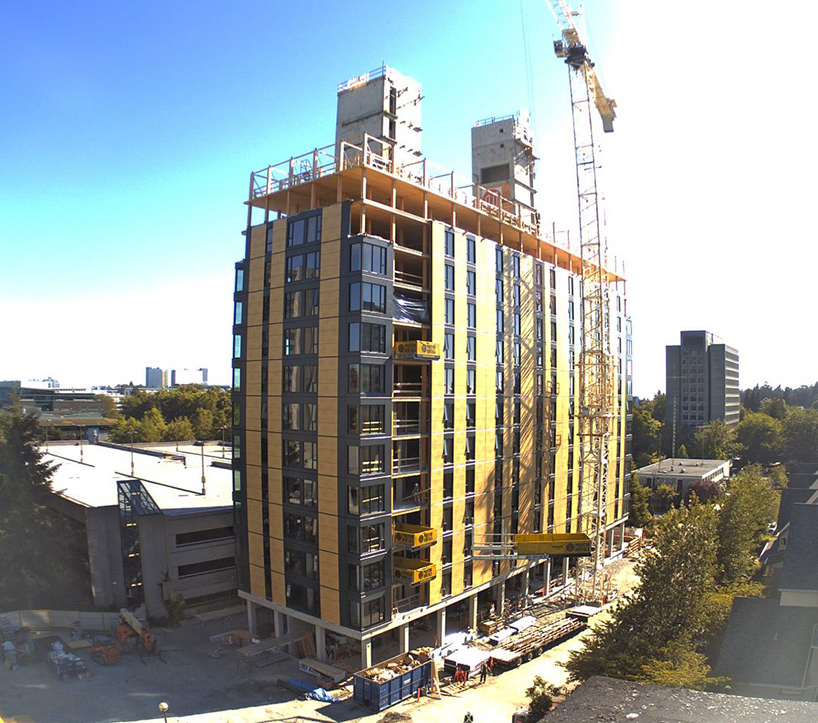 one of the tallest mass timber buildings in the world is currently under construction in vancouver. located at the university of british columbia point grey campus, the 18-storey student residence building will provide housing for over 400 occupants, as well as offering social and study amenity spaces. designed by acton ostry architects, the structure is a hybrid system comprising CLT floor slabs, glulam columns, steel connectors, and concrete cores. when completed in 2017 the building will stand at a total height of 53 meters. 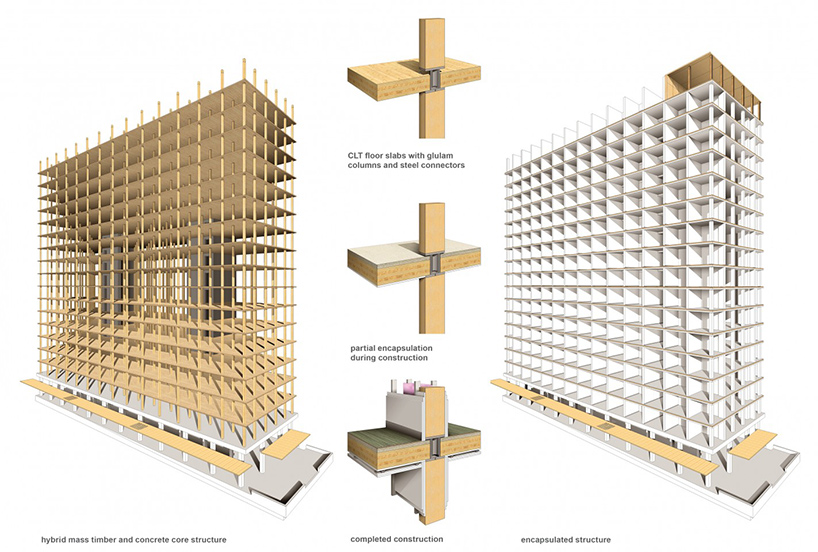 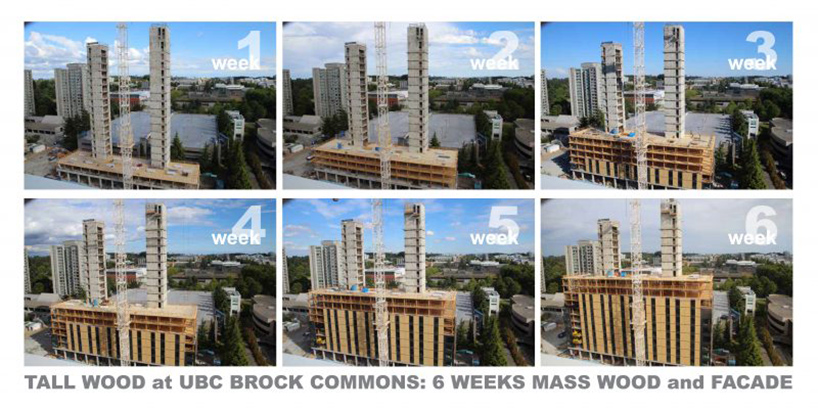 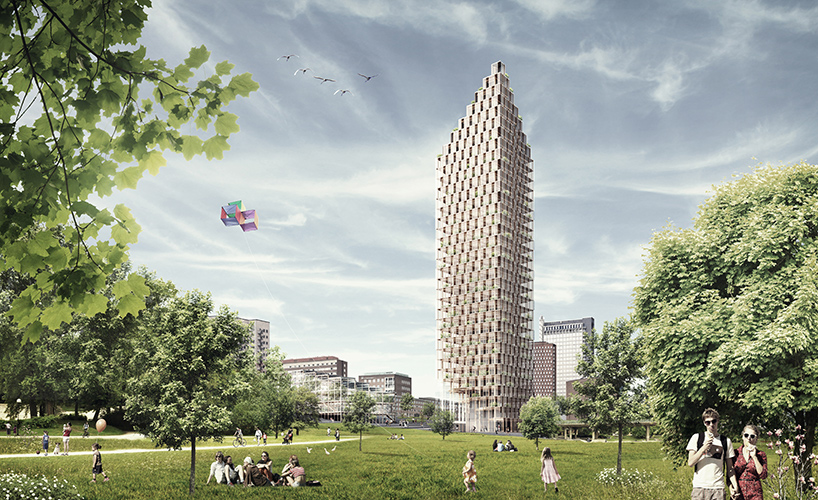 C.F. moller revealed plans for a wooden tower in 2013 / image courtesy of C.F. moller
see more of the project on designboom here