woods bagot has transformed howard smith wharves, a previously inaccessible historical site in brisbane, australia, into a multi-use lifestyle destination comprising a multitude of retail spaces and generous public zones along the riverfront. the masterplan celebrates the site’s heritage by re-purposing existing sheds, while the new buildings are designed to complement the original structures. at the same time, most of the site has been dedicated to green open space, creating a welcoming and publicly accessible backdrop to the precinct. 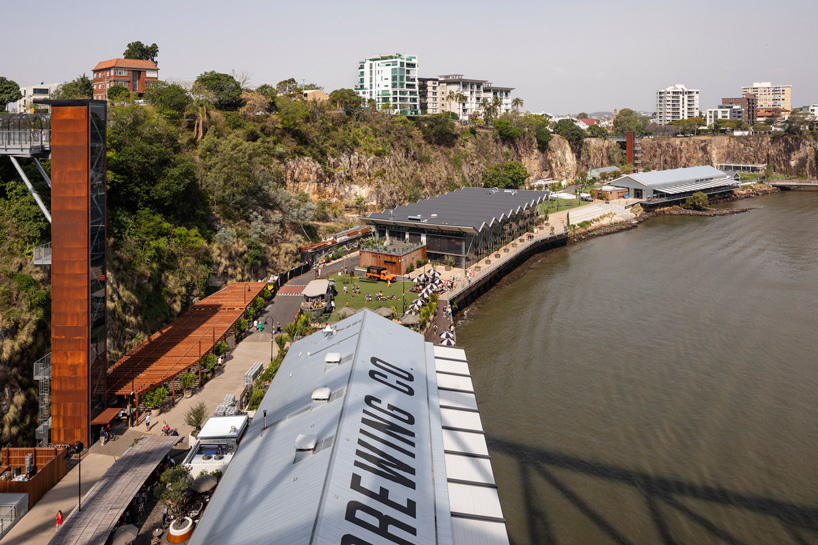 the previously inaccessible historical site of howard smith wharves was transferred to brisbane city council from the queensland government in 2004 on the proviso that it be turned into a public park with limited commercial development. woods bagot‘s masterplan fulfills the stipulation that only a maximum of 10% of the site can be occupied by new buildings. as such, the architects have dedicated most of the land to green public open space and repurposed existing structures, while they adopted a rustic palette that unifies the overall composition and harmoniously binds old with new. the introduction of exhibition space, hotel, restaurants and bars, activate and complement the new public spaces along the riverfront. 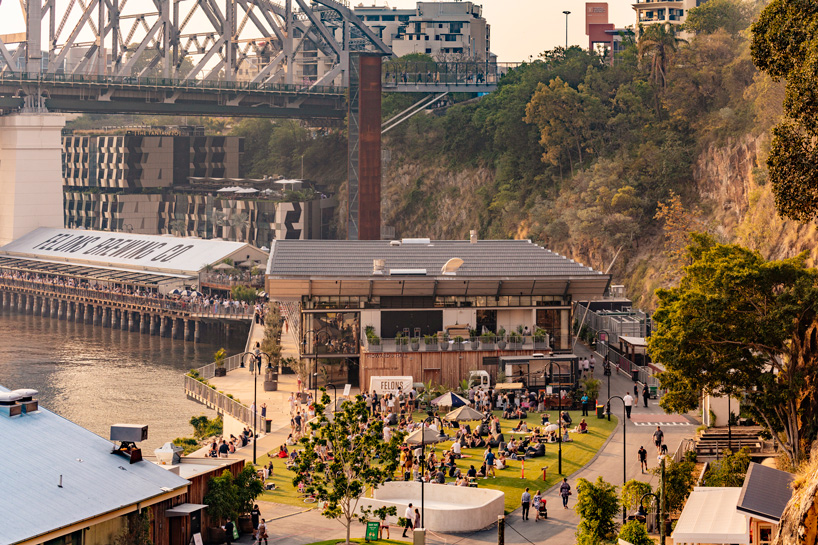 one of the highlights of the precinct is the 1,500 sqm exhibition space, howard’s hall, which takes its cues from the simple functionality of the nearby wharf structures. the building features a saw tooth roof, partially retractable floor-to-ceiling windows to maximize the riverfront views and operable walls to maximize flexibility. throughout the entire project, woods bagot retained as much of the original and existing building fabric, materials, existing structure, detailing and openings as possible. materials not fit for their original purpose were adapted for other uses on site, and minimal materials were removed. 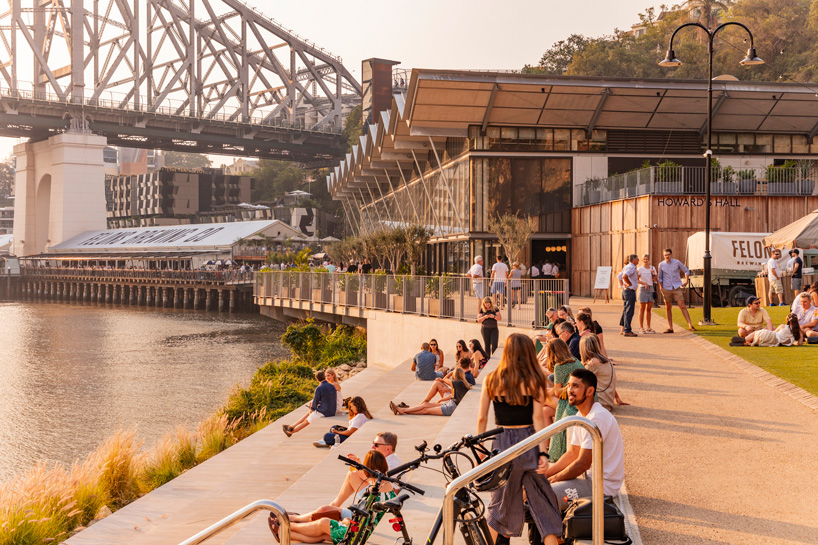 careful urban and landscape design has seen the site complete brisbane’s pedestrian links to new farm river walk and brisbane CBD through the creation of a shared pedestrian and cycle path through the center of the site. two new public lifts further activate the waterfront location, enhance safety and usability. as a result, the previously inaccessible site now accommodates for an estimated 21,000 visitors per week. the redevelopment also addresses waste from business operations, and employs ways to reduce it. 95% of all food waste is composted on site, while all glass, cardboard and some plastics are separated and recycled. the precinct brewery and coffee roastery produces goods on-site for restaurants and event catering with on-site gardens contributing to the production of fresh food as well as supporting local growers and makers. 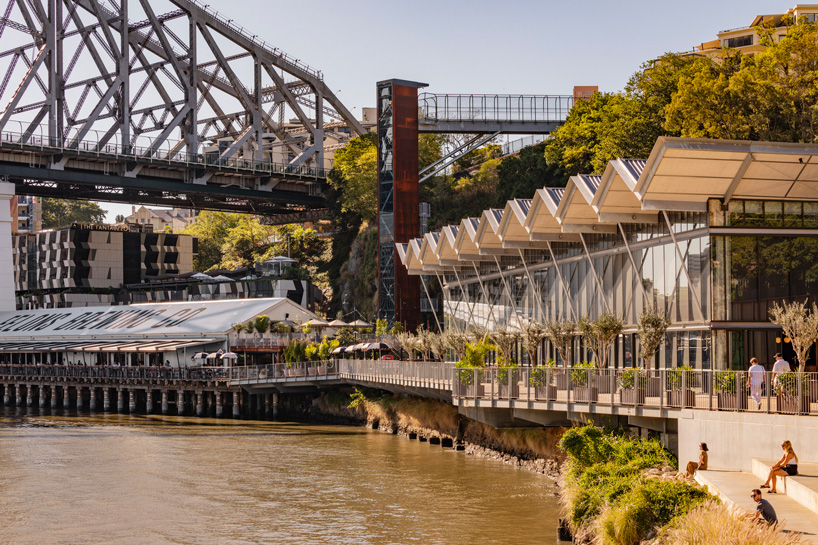 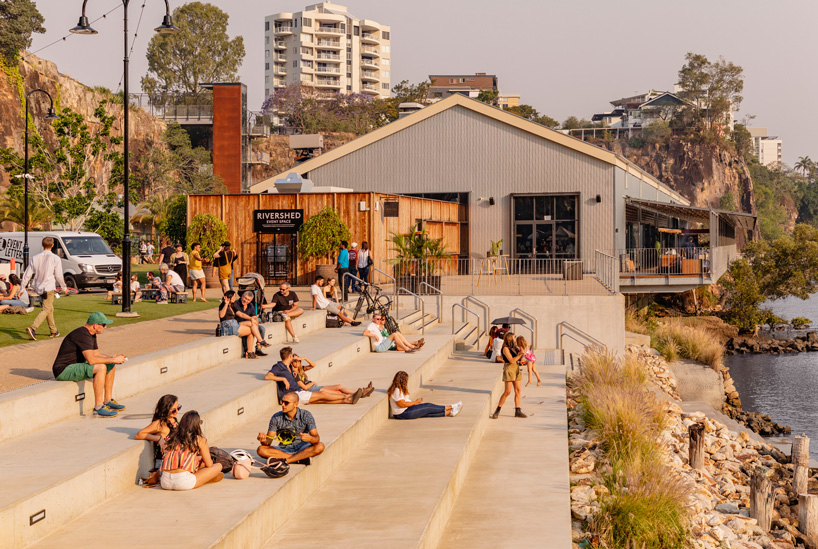 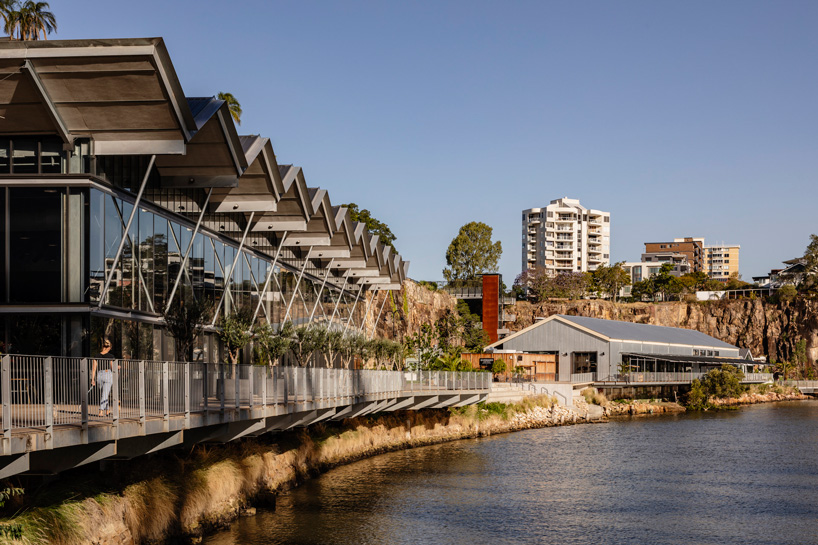 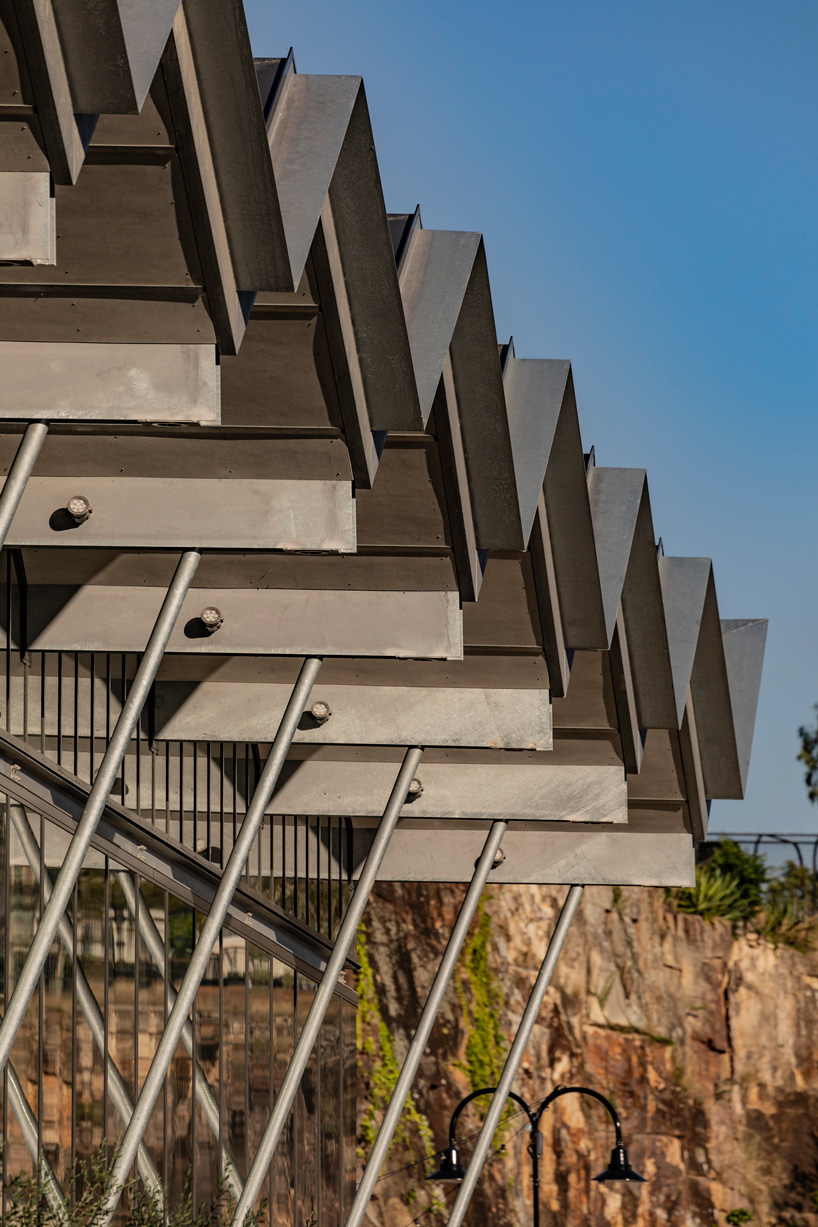 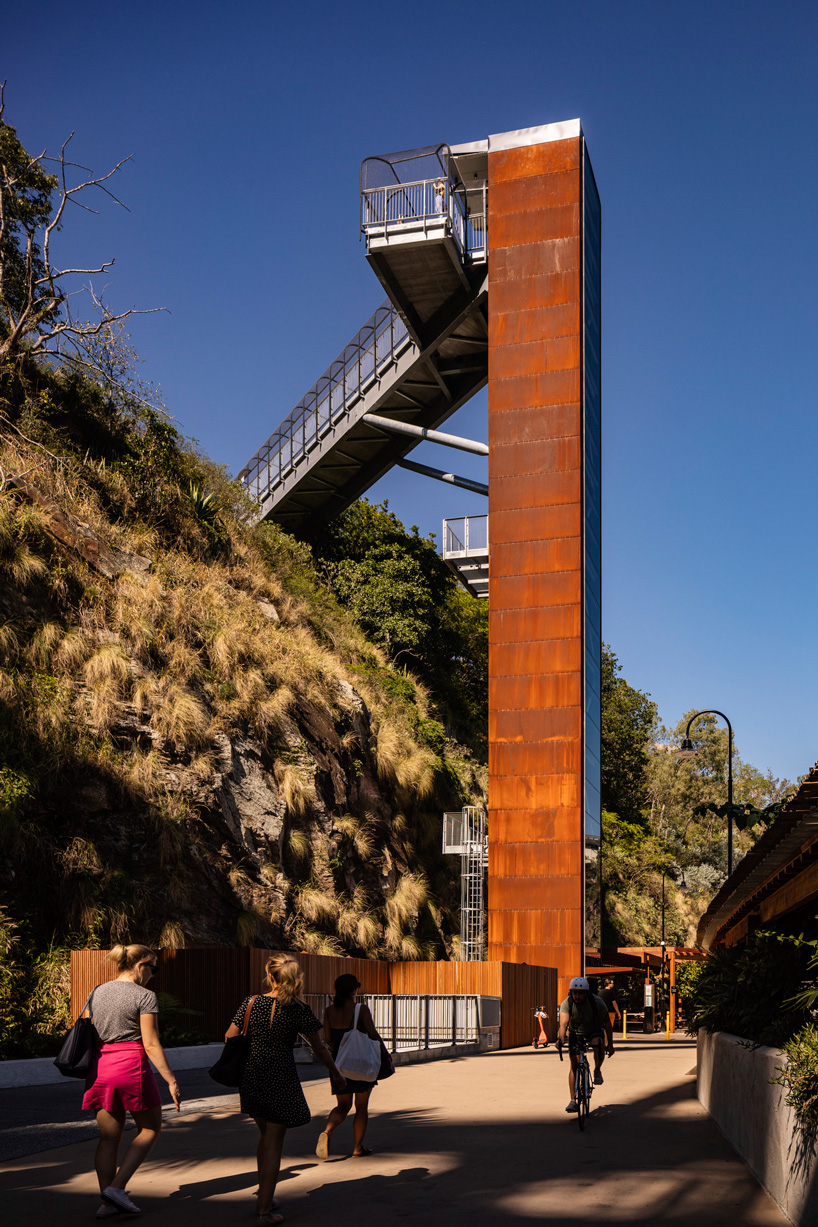 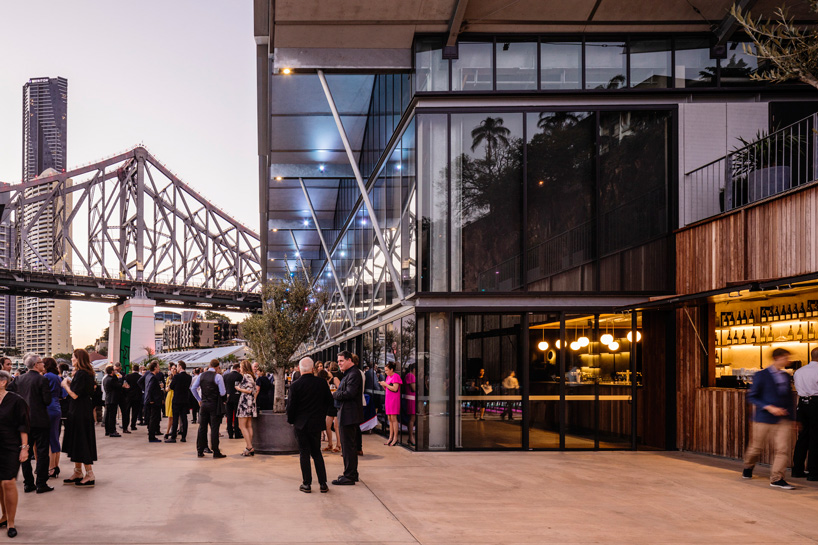 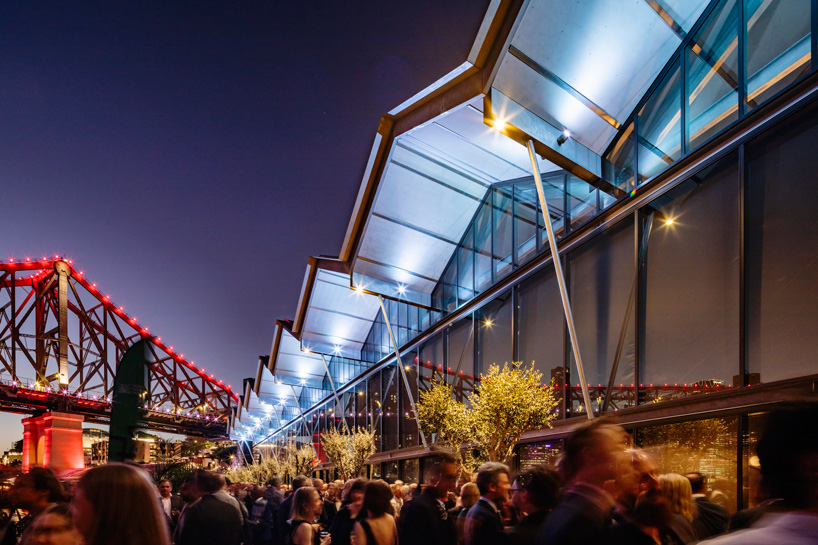 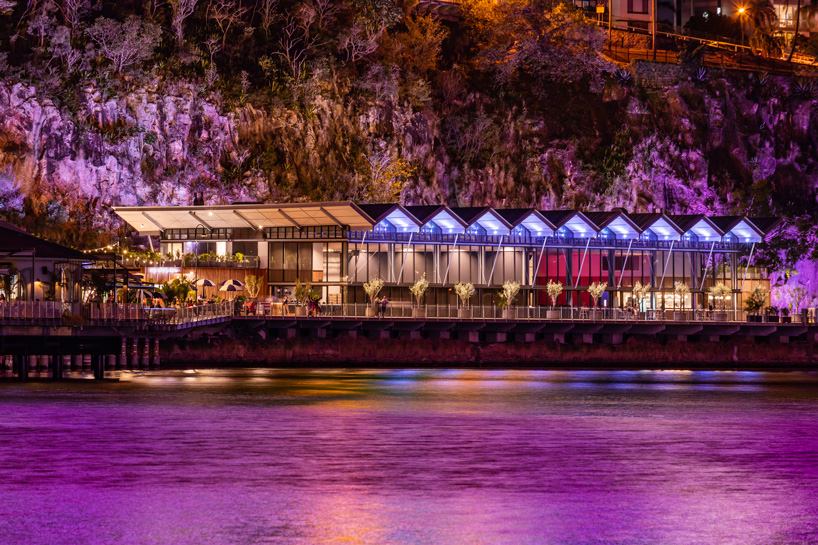 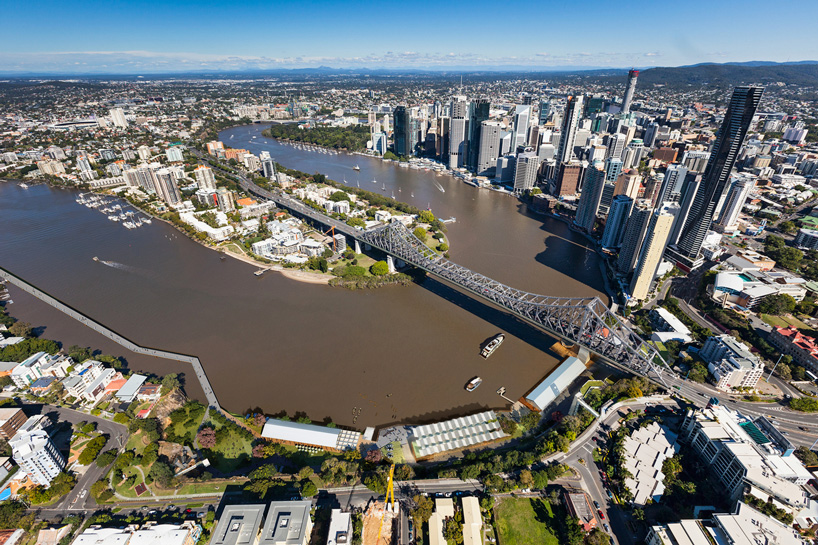