once every four years, summer isn’t about the beach, ice cream or the unbearable humidity in the NYC subways. every day, you’re transported across the world to watch the most important sporting event: the FIFA world cup.

the tournament is impossible to experience without emotion, memories of being with friends, family and experiencing the heat and joy that only sport can bring. the focal point of the world cup — which provides all viewers with memories that will last a lifetime — are the massive colosseums from where players become gladiators: fighting and representing their country on the global stage.

this year, russia is hosting the tournament — but first, designboom takes look at some of the most iconic stadiums in recent world cup history.

the largest stadium in the tournament, the nissan stadium (or the international stadium in yokohama, japan), hosted four games, including the tournament’s final of germany vs. brazil. with a capacity of just over 72,000 people, the international arena was the theater for the entire world to watch the brazilian legend, ronaldo, put on a man of the match performance scoring 2 of his 15 world cup goals (which were the most in history until it was broken in 2014), and clinch brazil’s fifth world cup title — the most in history. the international stadium in yokohama was designed by the team at MHS planners, architects & engineers, a japanese firm that is more than 87 years old. 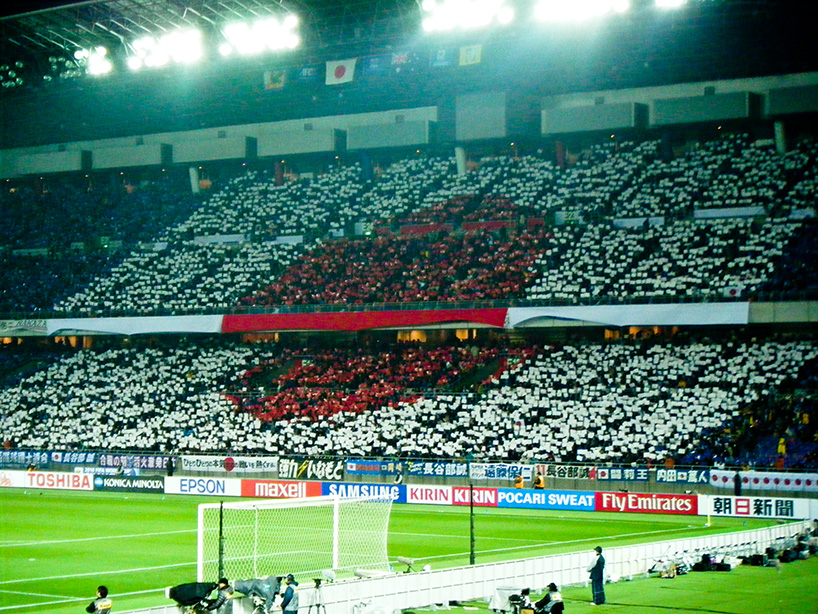 germany is one of the largest footballing nations in the world with some of the best teams and stadiums. as four time winners of the world cup and one of the most consistent teams in the history of the tournament, they were a natural choice to host the 2006 world cup. two stadiums hosted some of the most iconic games in the tournament, both of which are pieces of architectural genius.

first, signal iduna park in dortmund, germany seats over 63,000 people but can add an additional 20,000 for domestic matches for the football team borussia dortmund via a standing area called the sudtribune (south bank) — the largest terrace for standing spectators in the world. it has been nicknamed ‘the yellow wall’ for the intense atmosphere that it breeds turning signal iduna park into a cauldron. the stadium, designed by architect planungsgruppe drahtler, hosted six games in the 2006 FIFA world cup including the host nation germany’s 2-0 loss in the semi-finals to would-be champions italy.

meanwhile, the allianz arena is another massive stadium in munich, germany that was used for six matches during the world cup in 2006. it is home to bayern munich and houses over 75,000 people. it first opened in may 2005 and cost 340 million euros to complete. the architects from the swiss firm herzog & de meuron used three themes in their design for the allianz arena: equipping the stadium with an illuminated body that can change appearance and color on the fly; a landscaped area that provides an orderly fashion to enter the stadium; and an interior as a crater created by an increasing incline from the bottom to the top of the tiers, allowing for optimal viewing while providing a more dramatic atmosphere.

the first time the FIFA world cup traveled to africa, the nation of south africa was selected to host it in 2010. one of the most iconic stadiums was the beautiful 87,436 seater, the largest venue located just south of johannesburg, the FNB stadium. previously known as soccer city, the arena hosted both the opening and closing ceremonies of the tournament due to its national importance of serving as a site for historical events, such as the location of former president nelson mandela’s speech in 1990 after he was released from prison. for the world cup in 2010, the stadium underwent massive renovation courtesy of boogertman + partners and has been described as the ‘calabash’ or ‘african pot.’ 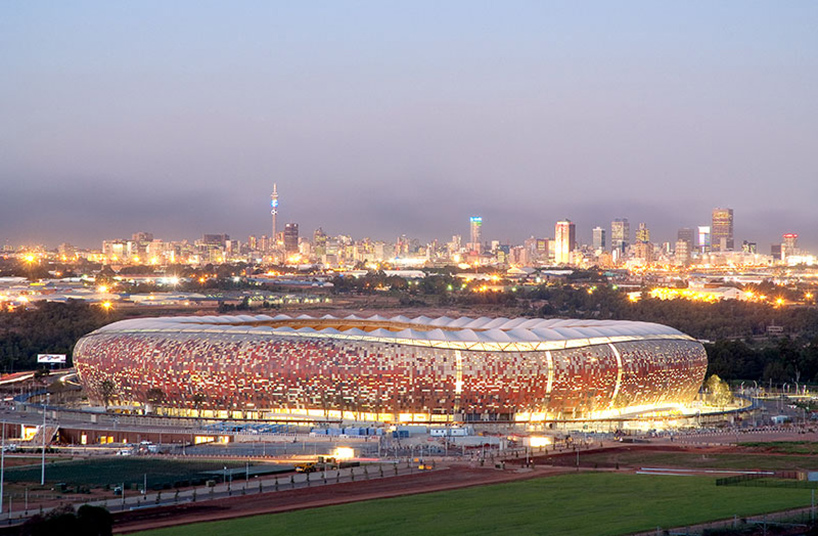 the country that has been responsible for bringing flair and ‘samba’ to the game, and produces world class players that fill europe’s top leagues, was selected to host the 2014 world cup. in the build up to the tournament, the government spent more than a reported $3 billion on stadiums. for example, the arena da amazonia built in the jungle city of manaus cost $300 million alone to build and the estadio nacional de brasilia cost $550 million to build.

the manaus stadium was designed by german architecture firm gmp, and is meant to symbolize the rainforest surrounding the city. it is positioned on the central traffic axis to connect manaus with the airport. however, when discussing the stadiums that were built or renovated for the world cup in 2014, it is important to realize that both of these stadiums do not have teams to continue using them and sit empty or unused, underlining the problems that constructing these stadiums can have for a country’s socio-economic standing longterm.

concept image of the stadium in manaus | image by copa2014.gov.br, under creative commons 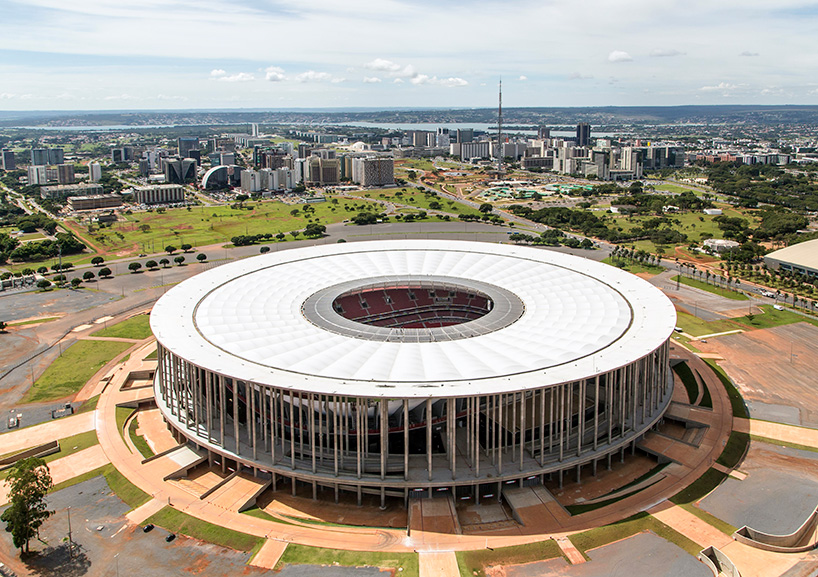 outside of estadio nacional de brasilia | image governo do brasil, under creative commons

the 2018 world cup in russia is being played across 12 stadiums — 5 of them brand new and specifically built for the tournament. we take a look at some of the most interesting architecture examples here:

on the site of the mamayev kurgan war memorial is the 43,713 person volgograd arena. designed from the concept of a victory day firework, the stadium has an inverted and truncated cone facade, while supports and windbreaks resemble aspects of celebration. using cables and spokes, the roof resembles the wheel of a bicycle and provides an additional element of ‘airiness.’ 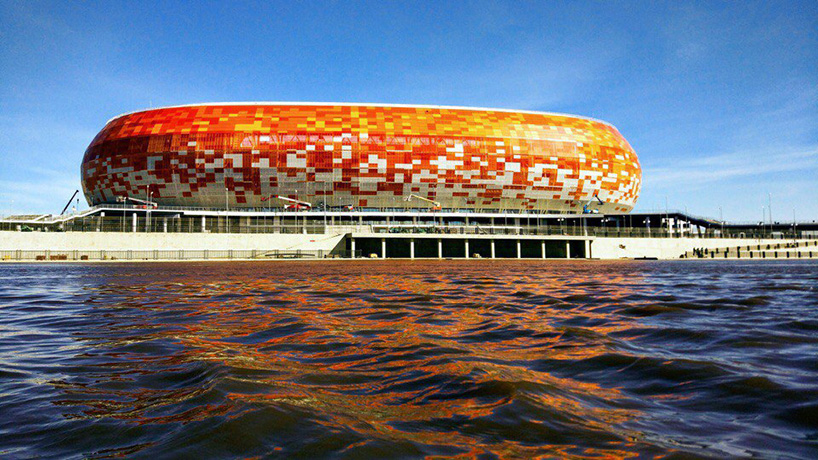 this stadium uses a range of colors such as orange, red and white, which are the unique to the people of mordovia. although it looks very similar to ‘soccer city/FNB stadium’ in south africa, it is a symbol for the unification of mordovia with russia’s other ethnic groups. construction began on the 1000th year anniversary of unification in 2010.

the stadium is built off of a concept of space, as a ‘tribute to the region.’ the structure is made up of light, metallic that can properly support the weight of the stands. at night, the lights illuminate the arena, showcasing the expressiveness of the design.

situated on the banks of the volga and oka rivers and near the alexander nevsky cathedral, this stadium is designed from the concepts based on nature, specifically water and wind. it is built of triangular supports arranged in a circular design, and has a semi-transparent façade that creates a bowl shape of the stadium. in the night, the façade lights up, revealing the structure’s ‘plasticity and airiness.’ 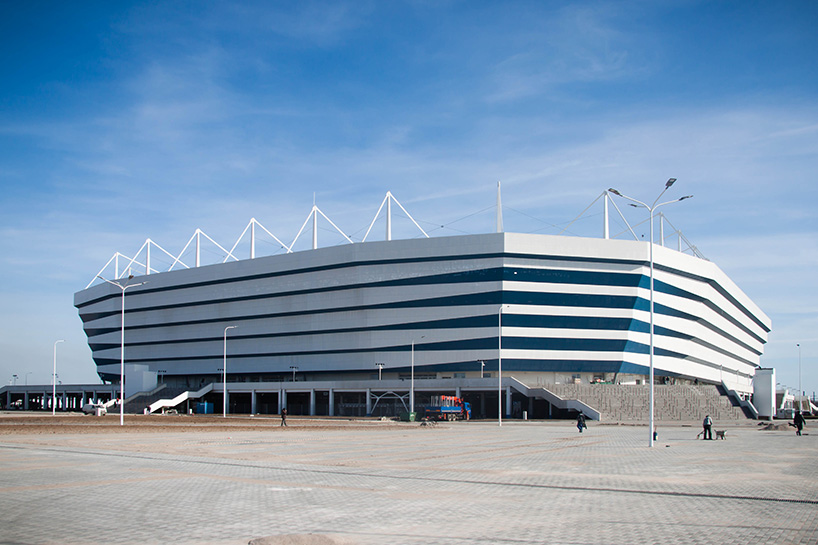 built on the island of oktyabrsky  — which for many years was complete wilderness and untouched — this stadium nows paves the path for new residential buildings to develop in this part of russia.

there are two other stadiums out of the remaining five that will be important locations for the summer 2018 spectacle. one of the most interesting stadiums of the summer is the ekaterinburg arena, which has been refurbished to fit the standards for the tournament with two temporary stands bringing up the capacity to 33,061.

the main stage of this summer’s opera will be the luzhniki stadium in moscow. two potential challengers for the championship — the orchestras of 2014 world champions germany and 2016 UEFA european champions portugal — will both play one of their group matches at the luzhniki. it will host in total seven matches — three in the knockout stages, including the final and one semi-final of the tournament.

originally built in 1956, it has been used for a number of major sporting and cultural events, such as the 1980 summer olympics and the UEFA champions league in 2008. as the luzhniki will host the most matches in the tournament, a renovation was completed to prepare, such as removing the athletic track and moving the stands closer to the pitch. the historical façade was also given a refurbishment to preserve its detail, while also expanding the capacity from 78,000 to 80,000. 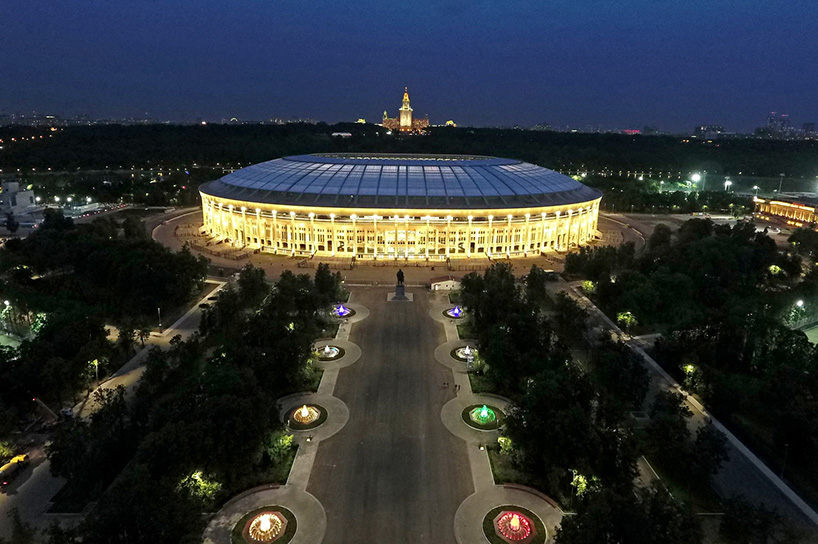 image via, under creative commons

now that we know the stages of russia 2018, we can start to understand where this summer’s romance will take place. it will start and end at the luzhniki stadium, but there will be pain, suffering, beauty and joy as goliaths fall and davids rise.