zaha hadid architects has revealed a glimpse of an almost complete exhibition and conference center in chengdu, marking the first building of the studio’s ‘unicorn island’ masterplan for the city. the video, which pans around the curved forms of the construction, shows just one part of the much larger scheme. once realized, the 67-hectare site will provide a huge mixed-use program to accommodate both work and leisure functions in china’s growing metropolis.

the name of the project comes from the term ‘unicorn companies’, which refers to start-ups valued at over a billion US dollars. with china now boasting a third of these companies, chengdu has become a hub for the latest technology and innovations. consequently, in the south of the city, the tianfu new area is being developed as an ecologically sustainable civic, business and residential center for china’s technology and research sectors. 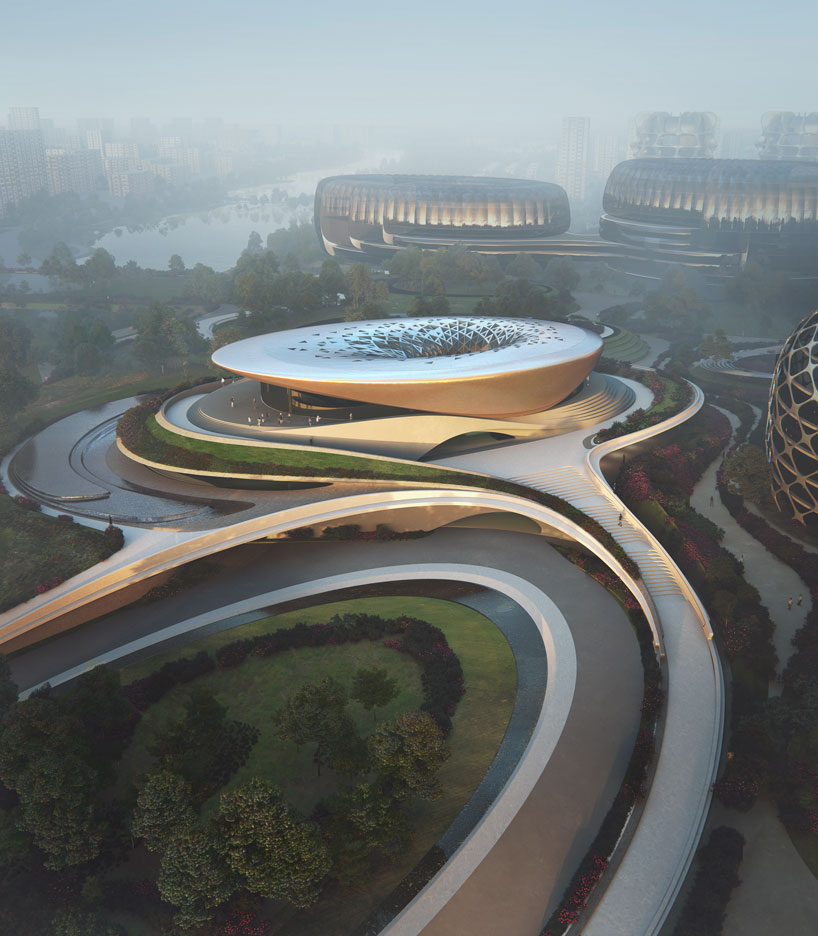 designed by zaha hadid architects, unicorn island will become a part of the tianfu new area and provide space for china’s digital economy to continue to grow. with its massive scope, the multi-purpose masterplan is planned to accommodate 70,000 researchers, office staff, residents and visitors alike. in addition to creating new living and working environments for chinese and international companies, the project is also developed to enhance the wellbeing of its community by integrating generous amounts of green areas and wetlands. 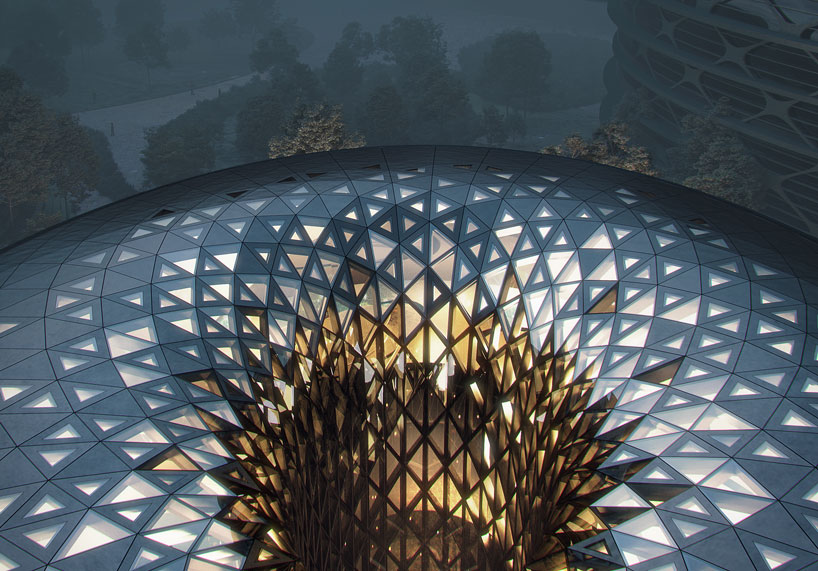 the design makes reference to the region’s historical natural engineering projects. constructed 2,300 years ago to the northwest of chengdu, the nearby dujiangyan irrigation system on the min river was named a UNESCO world heritage site in 2000. this ancient water management system deployed the river’s natural forces to irrigate the chengdu plain, creating some of the most productive agricultural land in china and protecting the area from flooding. 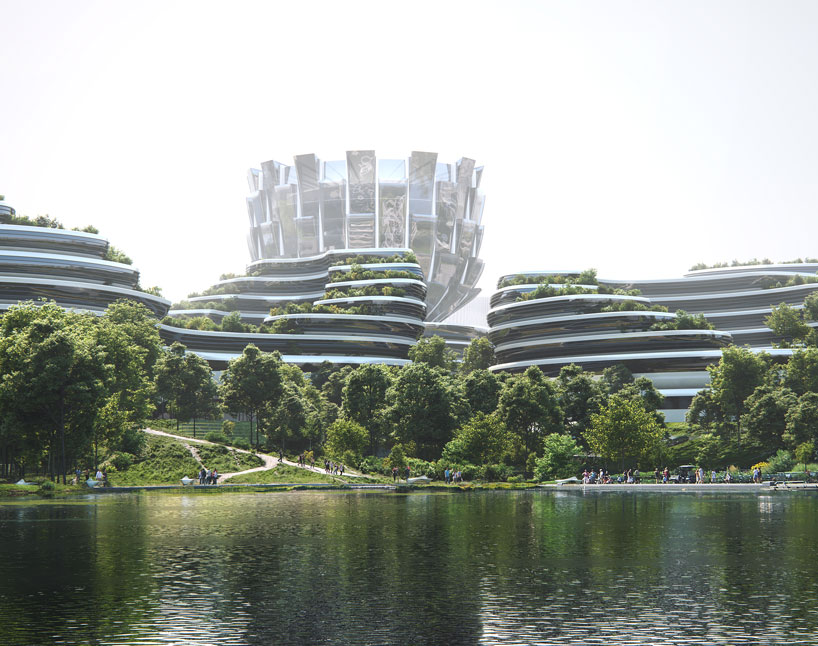 unicorn island’s parkland design is driven by the environmental principles of dujiangyan’s historic irrigation system and tianfu new area’s ongoing ecological work to re-establish its natural wetlands. with this in mind, the masterplan intertwines an abundance of green civic spaces, water conservation and principles of connectivity, in order to establish healthier living and working environments and improved wellbeing of residents and workers. 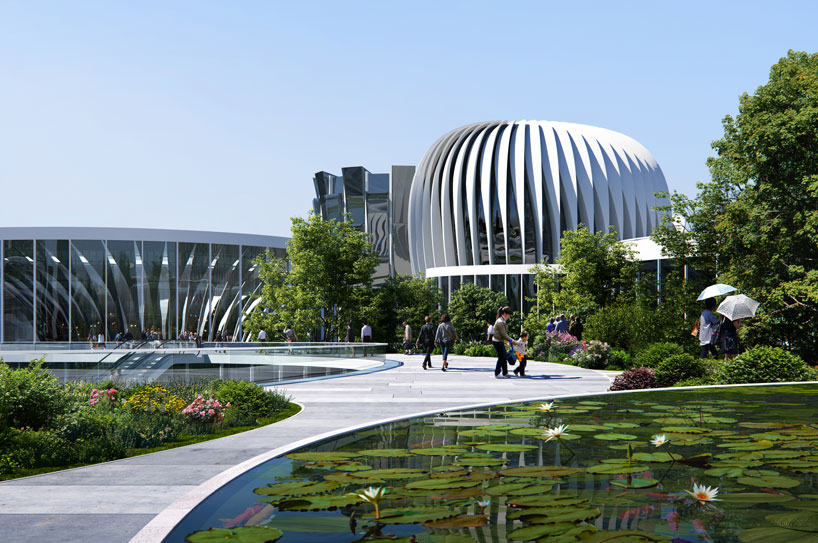 the masterplan is arranged in a radial array, with a plaza and metro station at the center, allowing the entire island to be easily reached on bike or foot. the buildings will be constructed in ‘clusters’ and respond to a diversity of functions. the architecture also intends to foster a strong sense of community by building to a ‘human scale’. this notion of community will also be harnessed thanks to innovations in urban farming technologies, which will provide residents, workers and visitors with fresh, locally-grown produce. 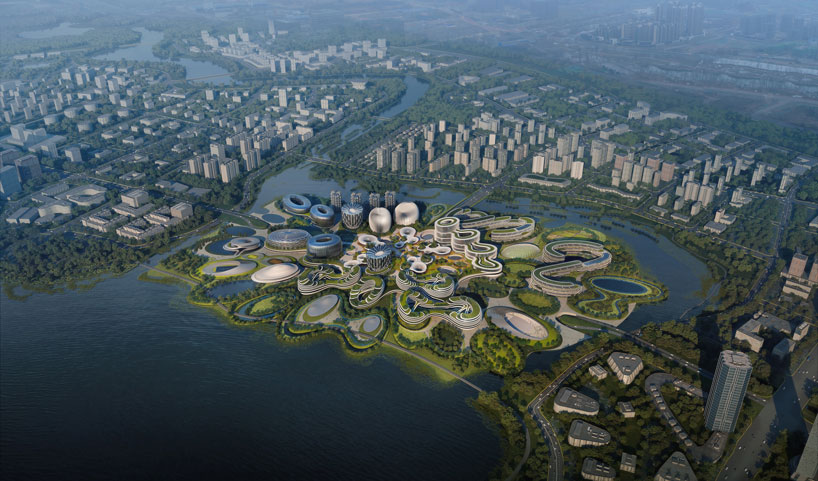