melco crown entertainment, a developer and owner of casino gaming and entertainment resort facilities in asia, has unveiled the project details and design of the fifth hotel tower at city of dreams, the company’s flagship property in cotai, macau. zaha hadid will complete a 40-storey hotel tower as part of the ‘city of dreams‘ development. the sculptural design forms part of a large-scale entertainment resort. establishing a strong relationship with its surroundings, the tower is envisioned as a landmark structure and a strong presence within the site.

the building is made up of two towers connected at the podium levels and the roof, while additional bridges span a series of voids carved into the singular volume. the elevation’s exposed exoskeleton not only presents a visually engaging and dynamic façade, but also allows for the optimization of internal programming by reducing internal structural requirements. maintaining a monolithic appearance, entrances to the building are neatly integrated within the external fabric, without the insertion of unnecessary elements.

with 40 floors and a gross floor area of 150,000 square meters, the tower houses approximately 780 guestrooms, suites and sky villas. the hotel also includes a variety of meeting and event facilities, gaming rooms, lobby atrium, restaurants, spa, and sky pool. including extensive back of house areas and supporting ancillary facilities, the tower’s design resolves the many complex programs for the hotel within a single cohesive envelope. 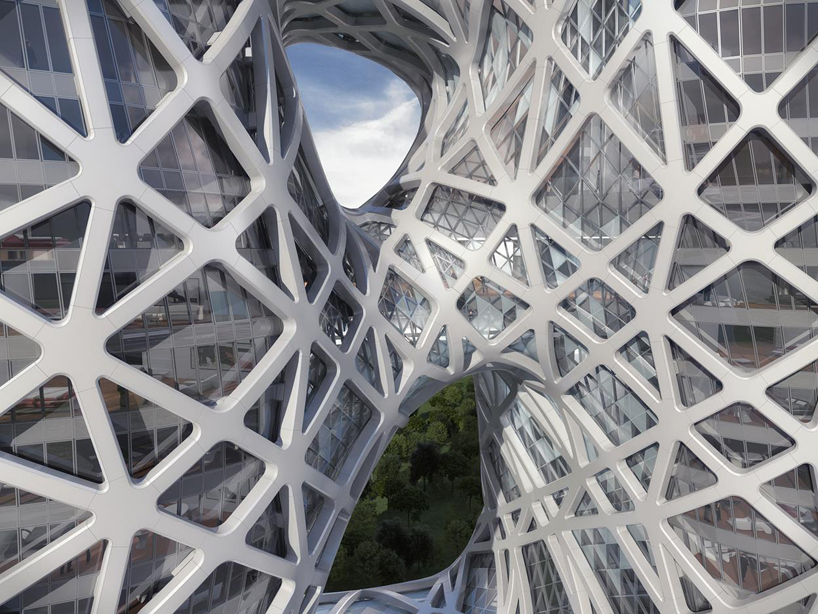 a series of voids carve through the center of the tower

the rectangular outline of the site is extruded as a monolithic block with a series of voids that carve through the center of the tower, merging traditional architectural elements of roof, wall and ceiling to create a sculptural form that defines many of the hotel’s internal public spaces. 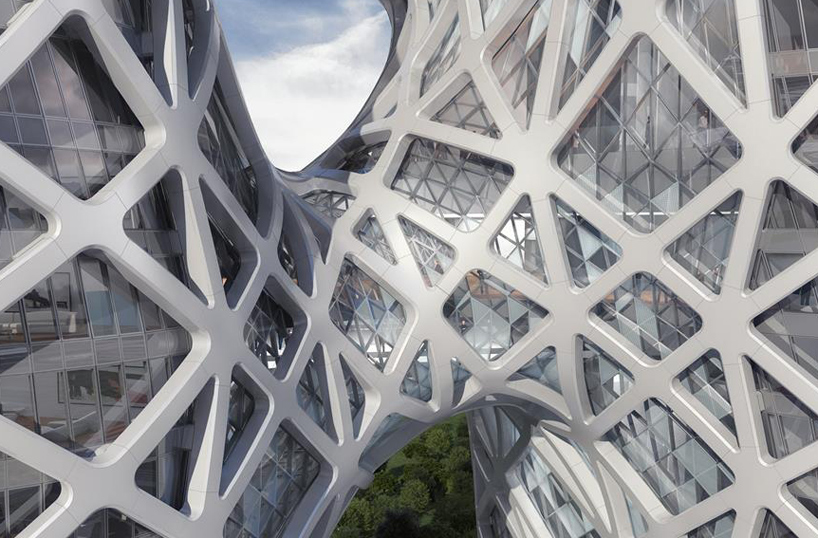 an expansive entrance brings guests inside a 40-meter high atrium finished with elegant and refined materials. at ground level, the lobby gives direct access to the retail strip and the main gaming area. the program is split between two distinct cores, either side of the atrium, which connect to the hotel accommodation floors and VIP gaming areas, while panoramic lifts allow for views of the voids when ascending the tower. 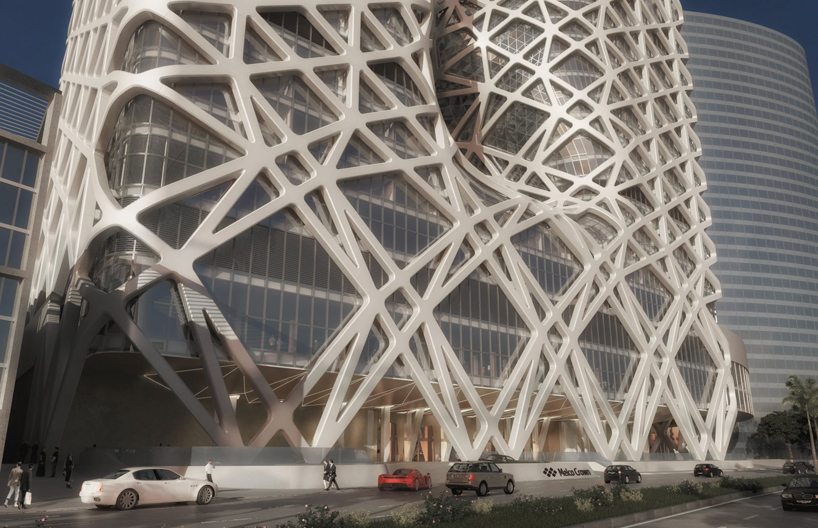 the tower’s exposed exoskeleton reinforces the dynamism of the design. expressive and powerful, this external structure optimizes the interior layouts and envelops the building, further defining its formal composition and establishing relationships with the new cotai strip. development of the new hotel at city of dreams commenced in 2013 and is expected to open in early 2017. 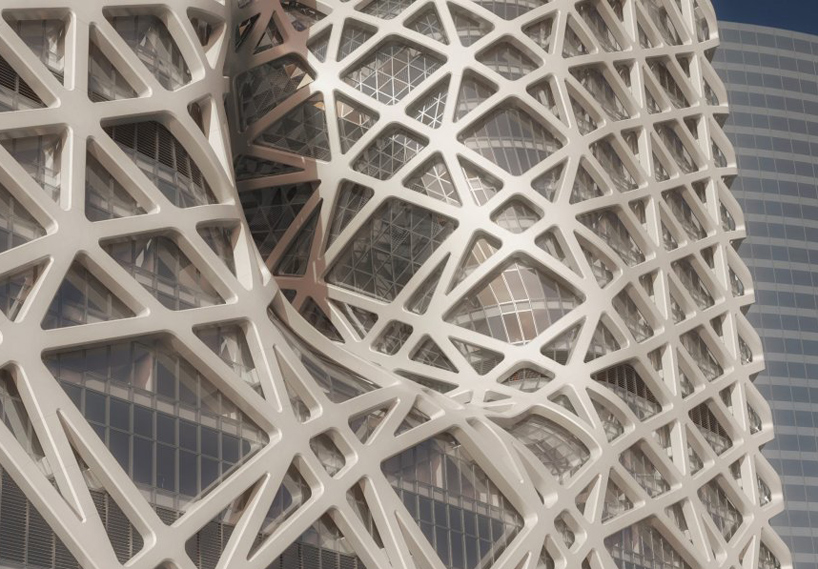 a close-up of the elevation’s exposed exoskeleton an expansive entrance brings guests inside a 40-meter high atrium 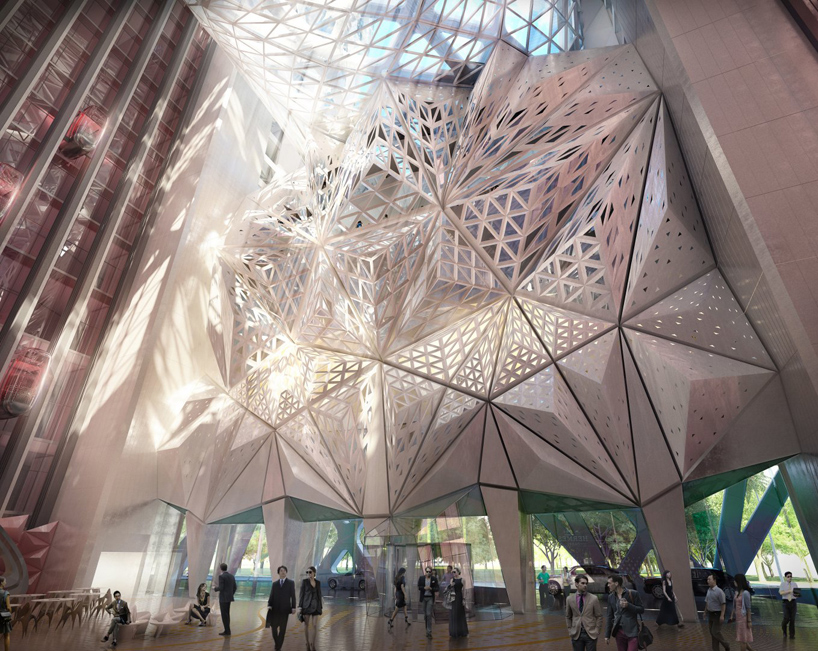 looking upwards through the lobby atrium development of the new hotel  commenced in 2013, and the project is expected to open in early 2017