zaha hadid along with brisbane-based practice donovan hill have proposed a dramatic folding roof for the flinders street station design competition. the bold linear form covers the concourse, letting natural ventilation and light to penetrate through, as it weaves in and out across the site. the scheme respects the existing heritage station by reviving its inherent properties. key view shafts to the historic structure still remain visible – the proposal is a logical progression for future use. more than just a train station, the design focuses around a multi-mode transport hub and attractive city destination, creating a distinguished mark on melbourne’s skyline. the urban design integration to the city’s hoddle grid and connection with southbank, is achieved through new pedestrian links and a reconfiguration of the surrounding street transport networks. both the building’s form and complex circulation paths reinforce the perception of movement across the mixed-use center. 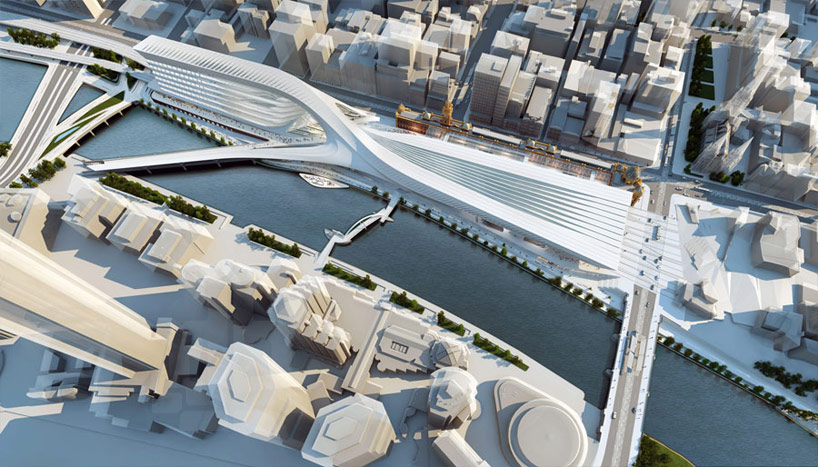 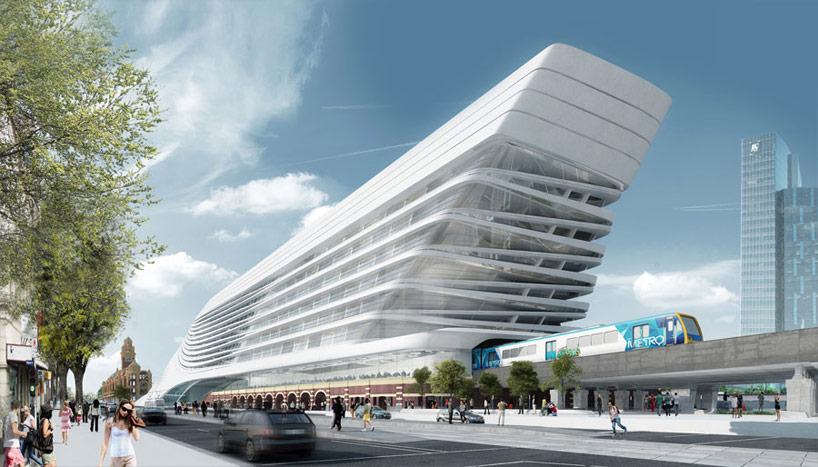 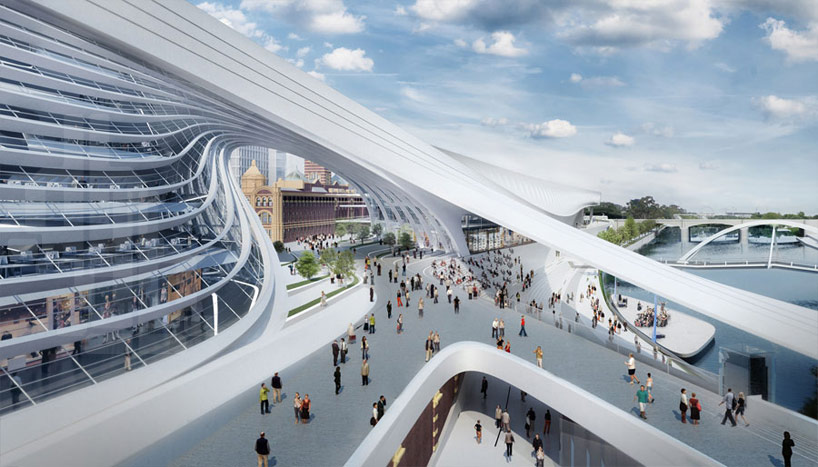 continuing the melbourne city fabric of streets and lanes, a variety of urban habitats permeate the site -from the intimate to the grand. adaptive re-use of the administration building is achieved with vertical circulation routes up to the concourse, connecting the old with the new. reopened for public usage the derelict ballroom space and large vacant dome will be transformed into an event space and fine dining destination. a new development, at the currently desolate western end of the site, includes a large commercial space, a 210 boutique hotel room and key retail spaces. the deserted milk dock and banana alley vaults are transformed into an active hotel lobby with bars, restaurants and cafes, open for public access, which helps to filter pedestrians through the site. major ESD principles are incorporated into the scheme, while the river’s edge the promenade is simplified, with new places to pause and a dedicated cycle lane. a strong interface with the yarra river is created by major public spaces, including the piazza, which is located above the train lines. an amphitheater and river square adjacent to princes bridge open the complex to the city of melbourne, and further enhance the form’s fluid sense of motion. 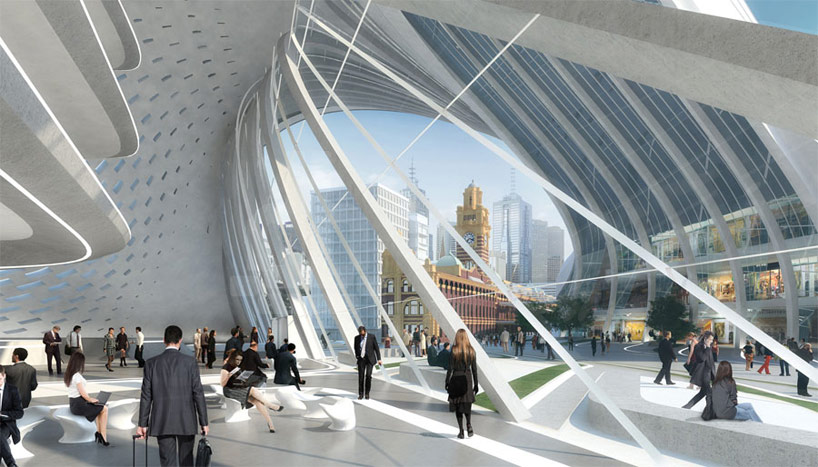 the heritage station is visible thorough the curved beams 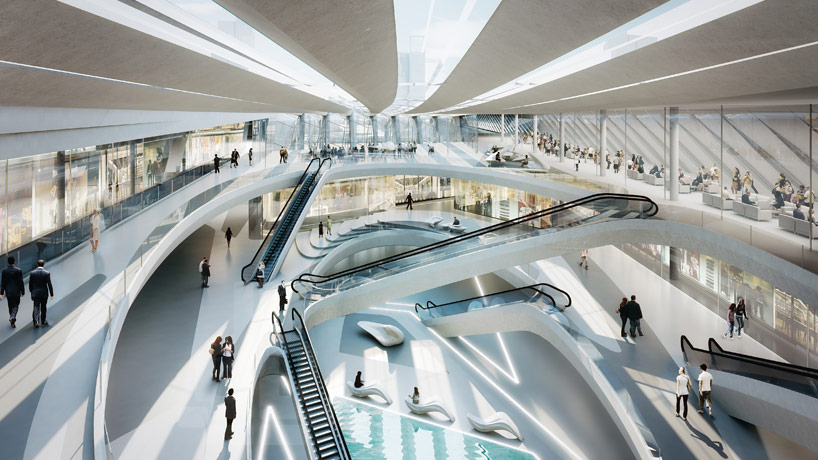 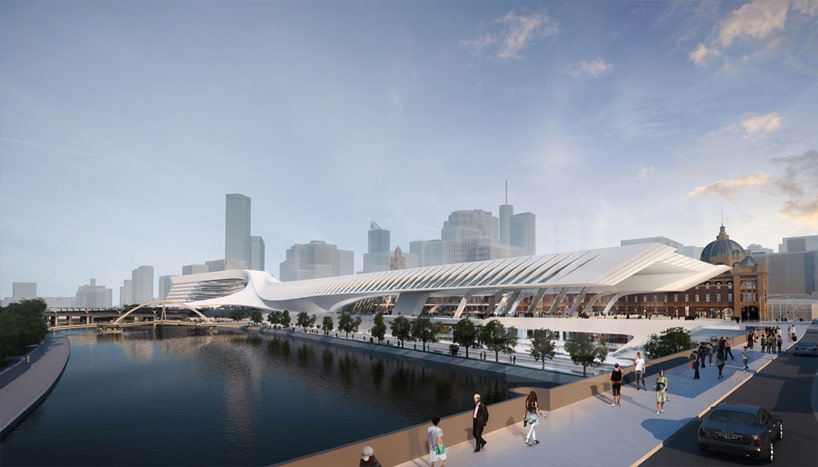 the station would create a distinctive composition of lines in space 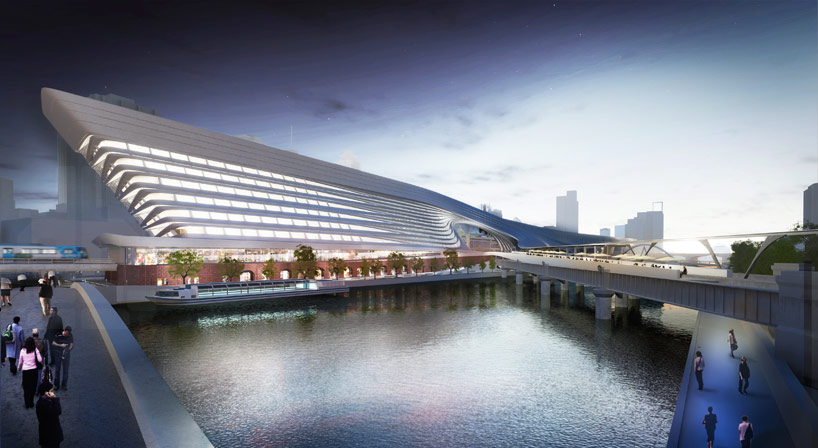 night view of the folded roof