chinese studio zhanghua architects has completed the yu qingcheng gallery in tianjin, china. modeled after the principles of internationally acclaimed sculpture artist yu qingcheng, the structure presents a physical and philosophical representation of form, space, and thought; the structure is in constant transition along each dimension, exemplifying that the journey is more important than the destination. paying respect to the artist’s craft, the structure is composed of a chain of clay-clad organically formed masses broken up by a dynamic sequence of glazed gaps. 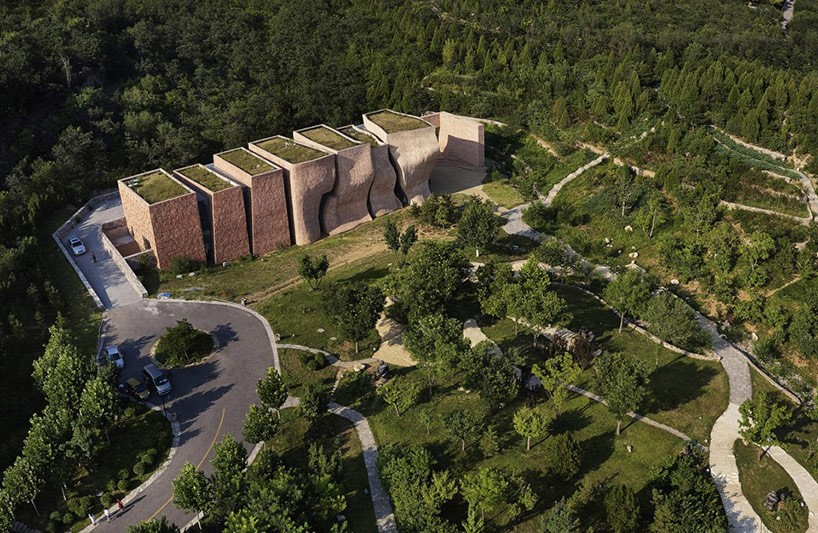 the series of masses transition into the imperceptible

starting from an orthogonal structure meeting the public roadway, the series of masses transition into the imperceptible before finishing into a space that is not a solid but rather a void in the form of a en exterior courtyard surrounded by nature. small ceramic tiles form larger patches of seemingly cracked earth — a pattern which diminishes throughout the building’s facade in both scale and separation until becoming a perfectly smooth structure at the rear end. edges slowly lose their rectilinear nature eventually curving into ever more sinuous lines. zhanghua architects based the design around ten guiding principles that create a dialogue throughout the gallery spaces: 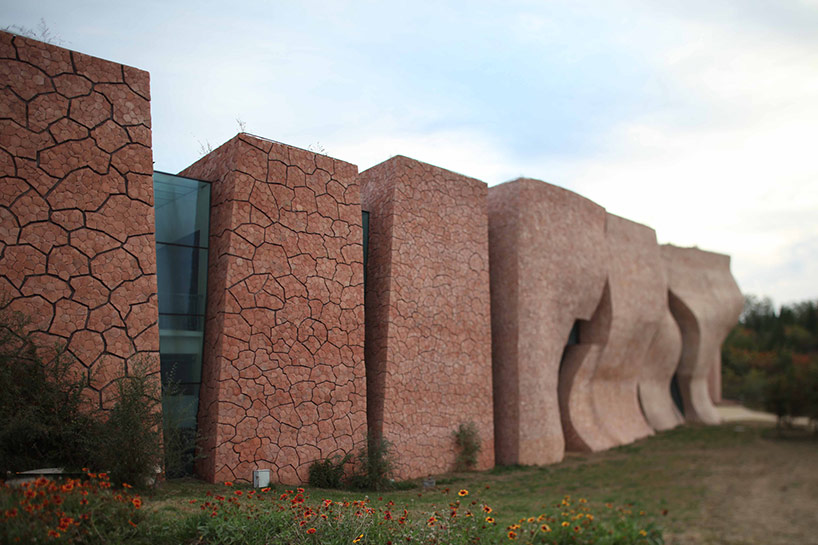 the sequence of opaque forms exhibits a clear transition

1. ‘mechanics‘, from ‘static to dynamic,’ refers to the fluidity of the form when read as a timeline as opposed to a single structure. 2. ‘differential‘- from the rectilinear to the curvilinear, describes the slow deformation from the traditional orthogonal. 3. ‘level‘ defines the diminishing scale of solid masses from front to back. 4. the clay is treated in such a way so as to lighten in color at each opaque form, following the concept of ‘optics.’ 5. ‘measurement‘ dictates the perceived thickness of the tiled facades, from thick to thin. 6. ‘meterage‘ describes the width and interval of the glass breaks. 7. ‘physical‘ refers to the texture, transitioning from rough to smooth. 8. ‘dimension‘ makes up the interior spaces, which begin as more 2-dimensional volumes to curvilinear walls that add a the dimension of depth. 9. ‘character‘ describes the palpable nature of the facade, from rough to soft. 10. ‘philosophy‘ relates back to the concept of yin and yan. 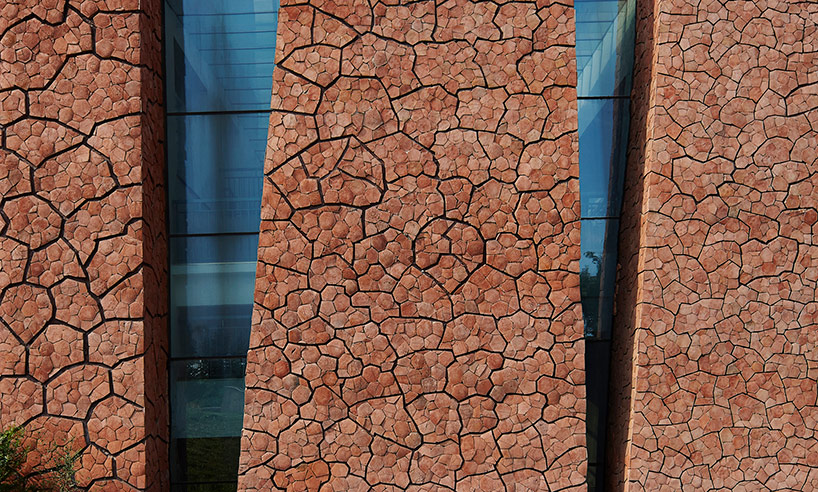 small ceramic tiles cover the entirety of the exterior

the interior is marked by the exact voids of the external forms, allowing the guest to experience the nature of the solid volumes both internally and externally. white plaster walls are able to seamlessly express the curvatures and lineal character of the walls. black tiles on the ceiling meanwhile inspire a sense of weight, and a contrastingly neutral backdrop against the muted concrete floors perfect for exhibiting art pieces.  skylights and transparent ‘metering’ provide opportunities for light to penetrate the structure from many different angles, reflected throughout by the polished floors and white-washed walls. the direct light falls on circulation spaces while indirect light illuminates the works. 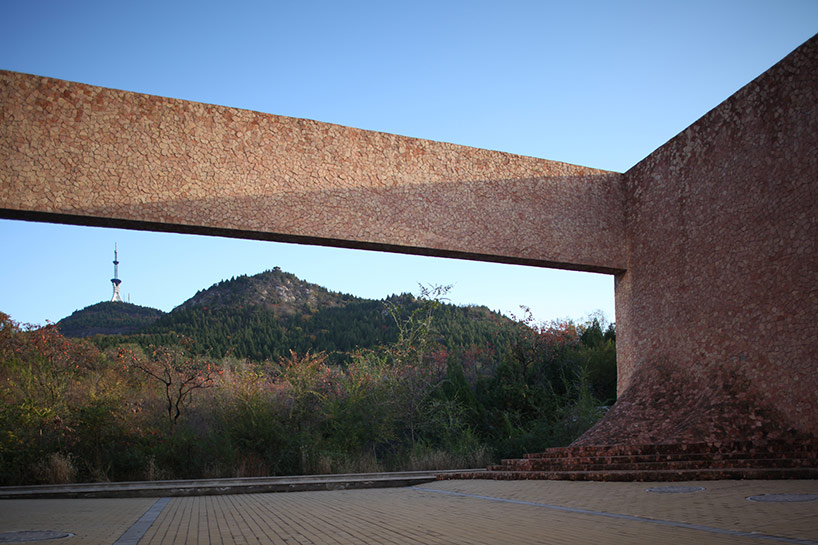 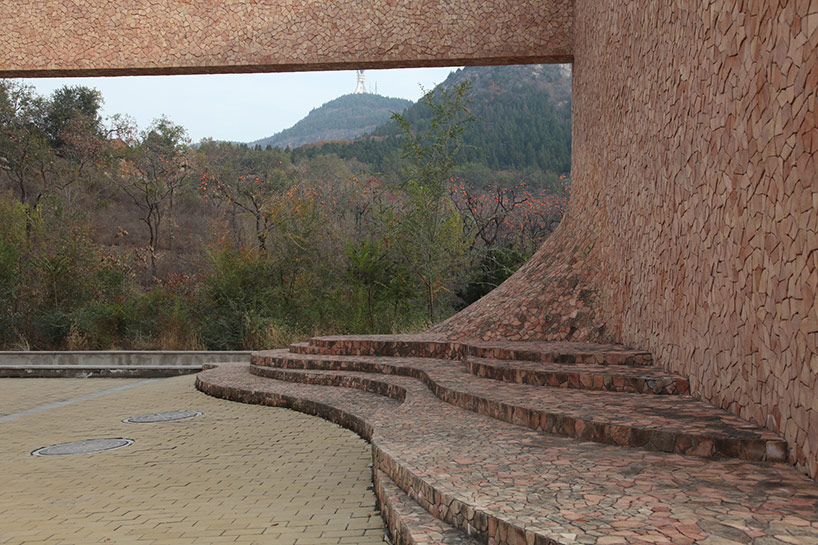 tiles cover every exposed face of the construction 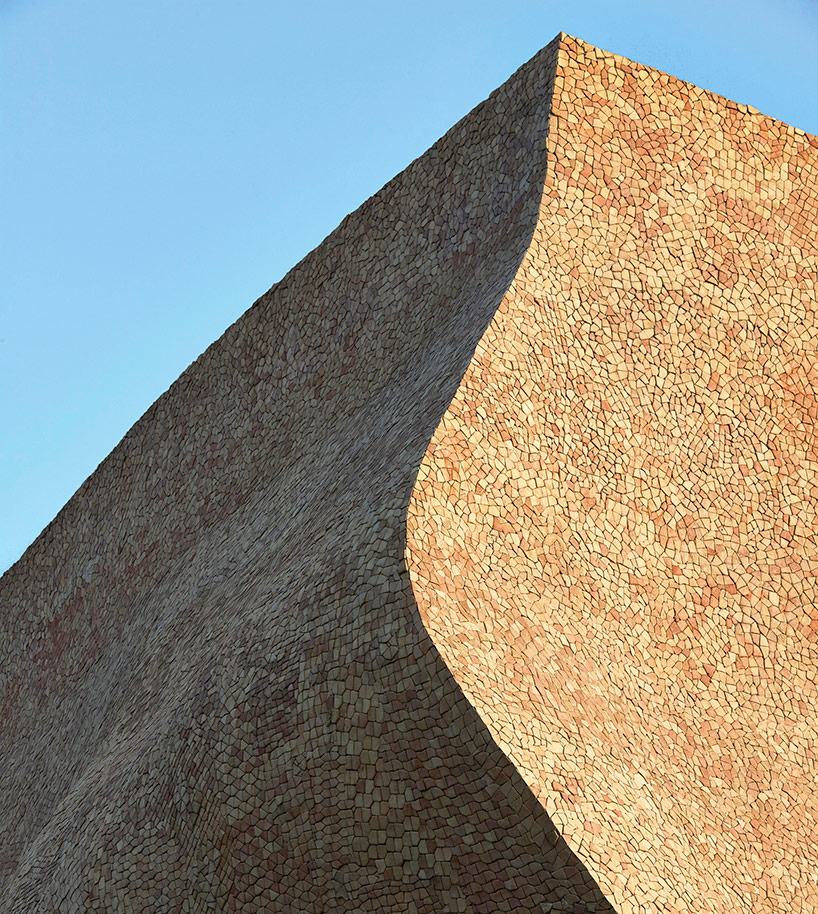 at the last volume, the facade is compost of smaller, softer, light-colored tiles very closely joined to create the sense of smoothness. 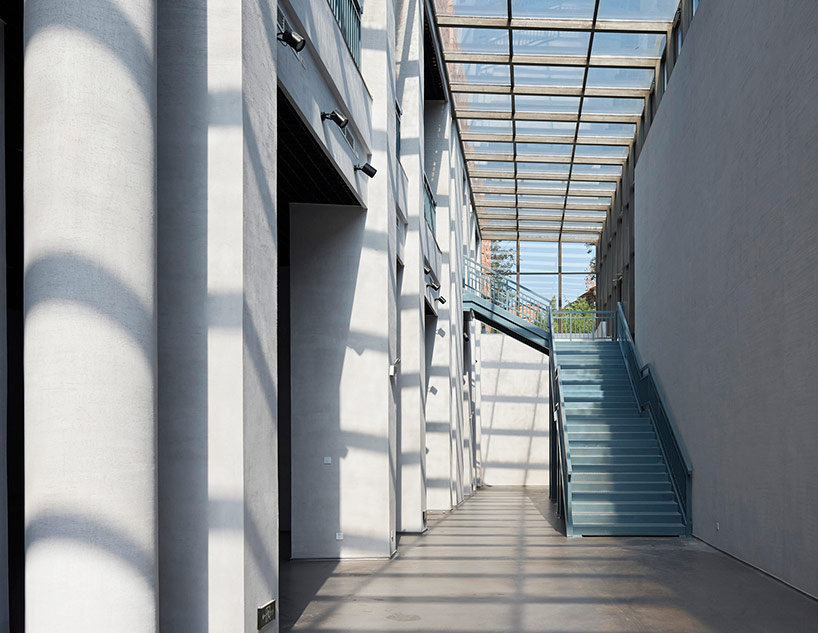 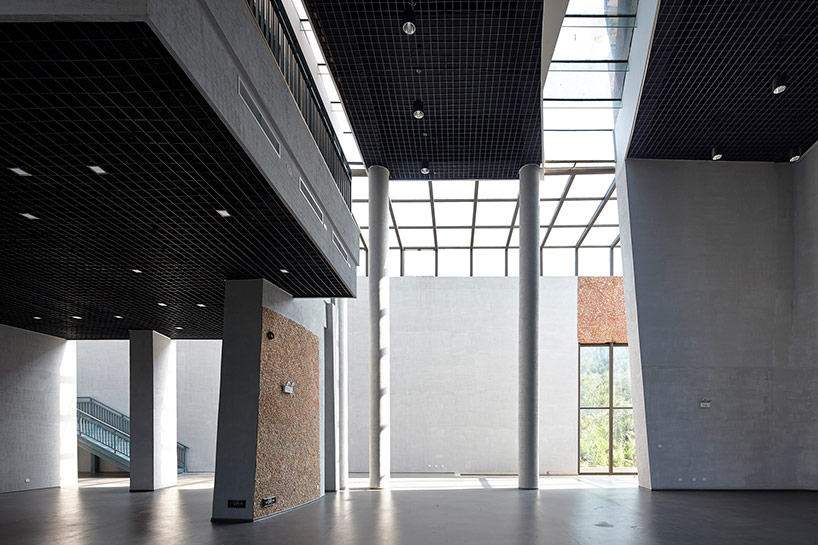 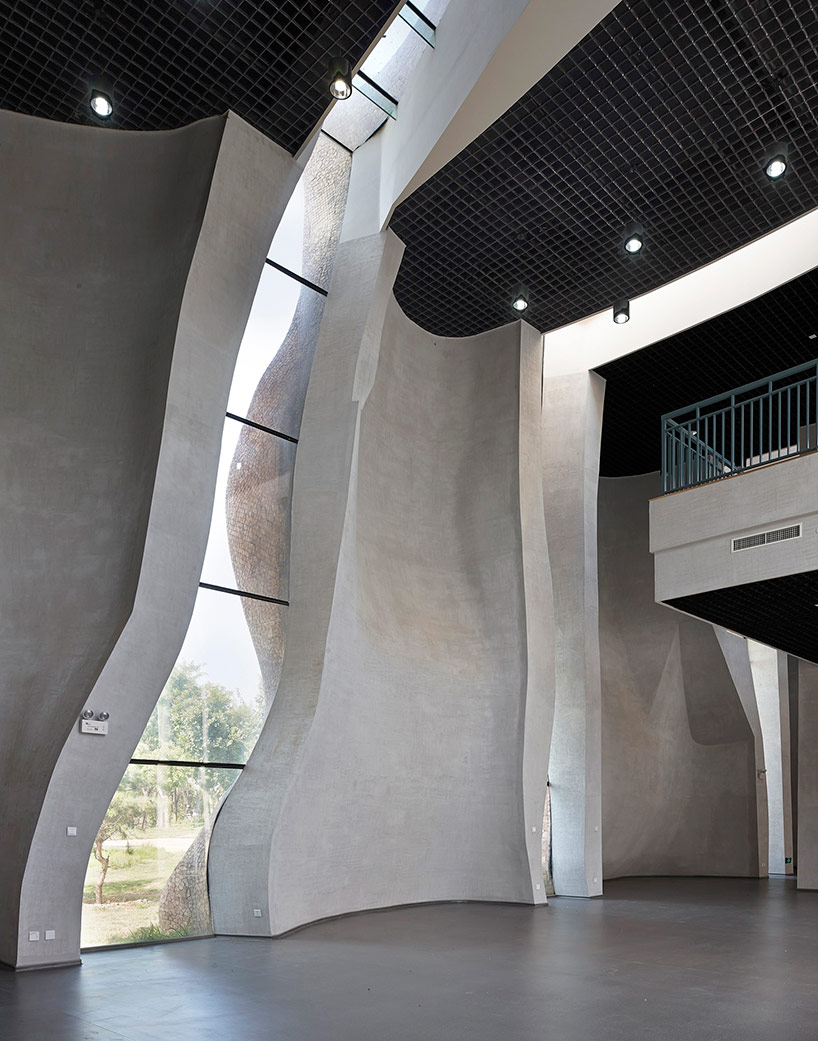 plastered walls accentuate the progressive curvature of the structure 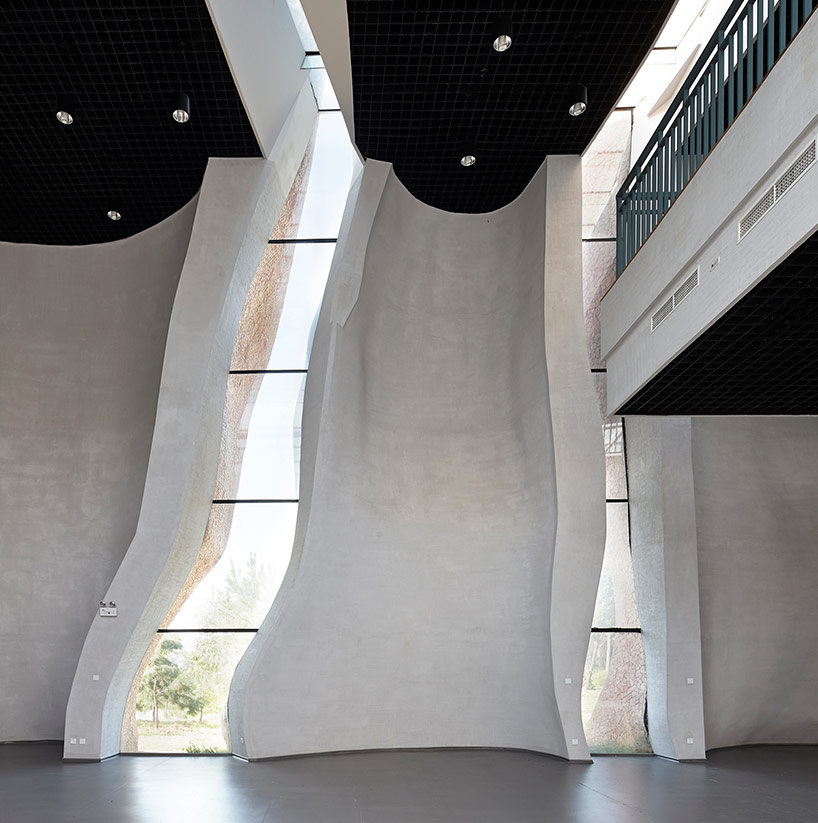 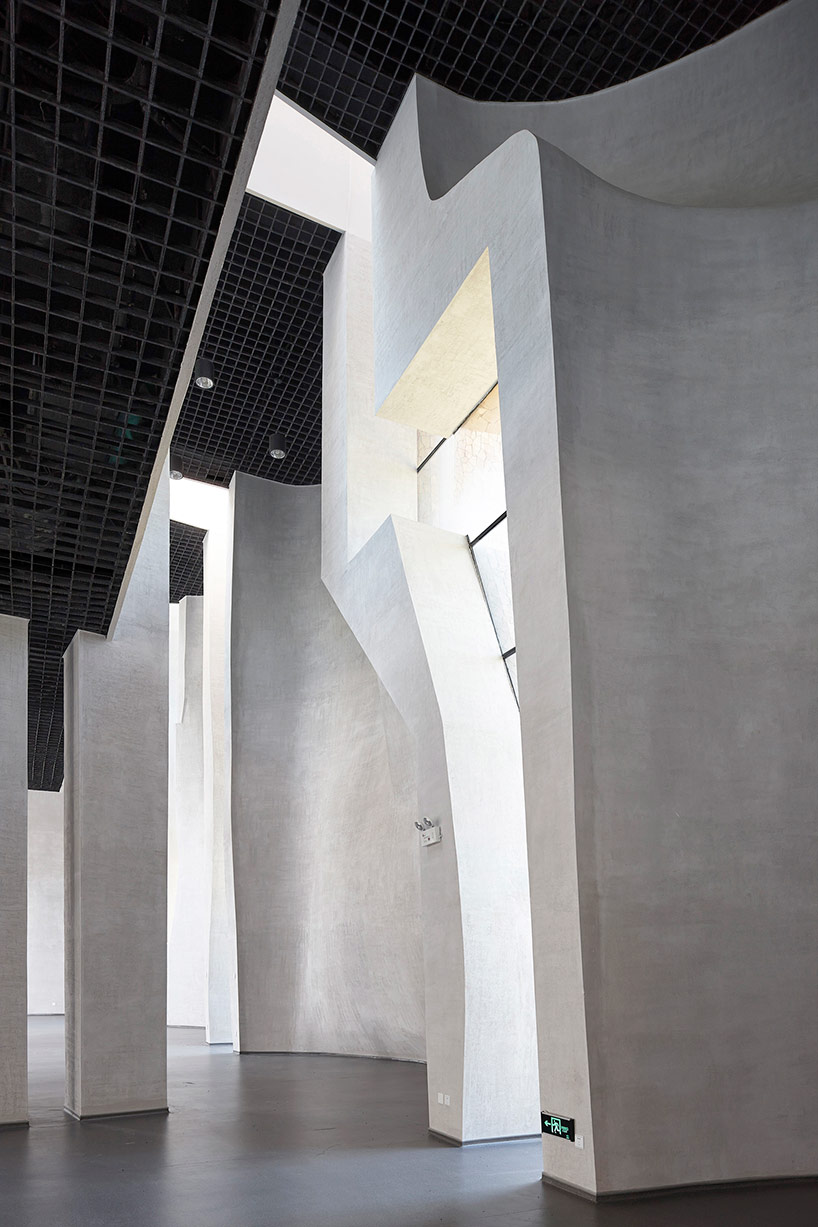 the nature of the building transitions from front to back in every aspect, from the linearity of the edge to the straightness of a wall 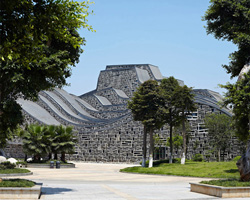 Sep 24, 2018
this sculptural hall in china mimics topography and movement