dutch architectural firm zwarts & jansma has been selected as one of the five finalists for a next generation wildlife crossing at west vail pass, colorado. the competition is intended to solve the problem of ensuring safe travel for humans and wildlife. collisions between vehicles and wildlife have increased by 50 percent in the past 15 years threatening human and wildlife safety, and costing americans 8 billion US dollars annually.

‘landshape’ combines the natural and human dominated worlds of the west vail pass. it reconnects landscapes with a charismatic wildlife that depends on the place.

prolonging the landscape trademark,’curves’ are the main organizing elements for the architecture of the load bearing structure itself. in the cross section the curve ‘contains’ the landscape and the wildlife that overpasses. in a longitudinal direction a curve carries the over passing landscape and wildlife.

these two main organizing curves are combined to a double curved surface from which a thin shell structure is generated. this ‘ideal’ symmetrical surface combined with the non symmetrical geo contours derived from the sites topology and morphology generates a form which is sensitive, at the same time follows the natural curves of the forces – which creates ‘landshape’. 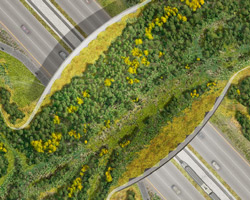 Feb 15, 2021
RSHP cantilevers the 'richard rogers drawing gallery' above the grounds of château la coste
treading lightly on the landscape, the building cantilevers out 27 meters to a point 18 meters above the terrain below.
architecture
385 shares
connections: +490

Feb 12, 2021
ensamble studio builds its own prototyping facility and fabrication laboratory in madrid
the architects say that the building, and the activity that takes place within it, is meant to transform the way in which buildings are designed, engineered, and built.
architecture
352 shares
connections: +940