american film professor and photographer cy kuckenbaker has captured every airplane that landed at san diego international airport between the hours of 10:30am and 3pm in a time-lapse video. the concept was born from an image by ho-yeol ryu at hannover airport – showing a herd of the massive machines in one visualization and kuckenbaker wanted to capture the unusual flight path that brings planes very low right over the center of the city of san diego, causing them to drop behind a hill the make the runway. to create the video he would shoot the planes on a cloudless day individually then isolate the image of the plane and composite each one together in a timeline with adobe premier.

a video of the planes in timelapse

kuckenbaker describes his method in more detail: ‘I locked the camera (canon 7D with a EF-S 17-55 f/2.8) on a tripod and shot the planes with 1080p video at 24fps with an exposure I’d tested the day before (50/s, f/13, ISO 100) that would keep the sky deep blue with no blowout for a good chroma key. to give the video a sense of temporal change as the planes fly by I did an 8 hour time-lapse under a bridge nearby shot at the same angle and composited it over the planes. without it there’s no sense of time passing. I used an intervalometer to shoot about 800 images with the same exposure as the video. once I had it posted as a regular video clip, I keyed the sky out of it as well. I put everything together in adobe premiere, which challenged my system since I needed 40 video tracks to stack all the airplane clips together.  the last piece was to put a new sky back in — a still image with depth and clouds that’s panned using key frames in premiere.’ 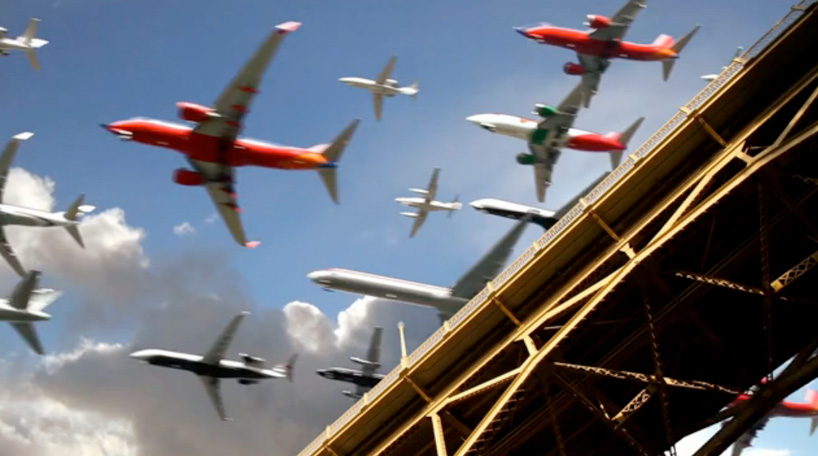 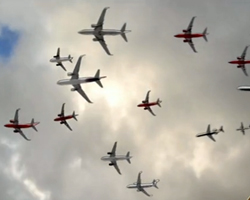