aakash nihalani creates an interactive canvas for his new series of ‘projections’, comprising cubic designs projected onto a white wall that respond to the movements of an active participant. a nearby sensor tracks the motion of viewer’s hand, revealing a composition that reacts in real time using coding and motion software.

solitaire-like stacks of black rectangles snake around the surface of the wall, mimicking the swerving loops of the participant’s hand; blue building blocks collapse and shift in space based on the viewer’s actions. the result is an infinite variation in composition, as unpredictable and original as the person interacting with it. ‘as with my street installations’ nihalani says (previously featured on designboom) ‘these works not only invite human interaction but cannot fully exist without it, ultimately revealing as much of the individual as the piece itself. this exchange between the artwork and the viewer is essential in order to illuminate the underlying personality and sculptural quality of the work’ 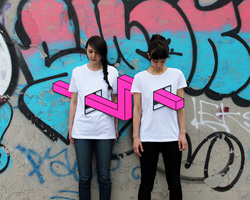 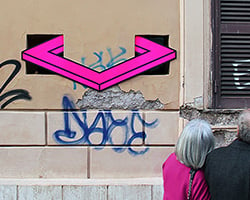 Apr 14, 2014
vantage by aakash nihalani at wunderkammern in rome 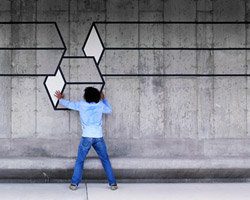 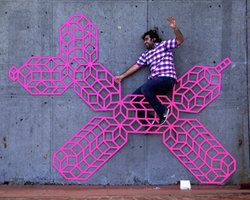 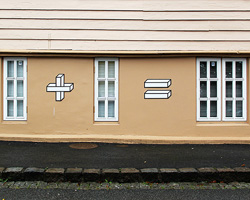 Dec 10, 2012
one plus one equals window sum times by aakash nihalani