designboom has visited the first solo exhibition in sweden by chinese artist ai weiwei at magasin 3 stockholm konsthall. weiwei’s installation includes several monumental politically-driven sculptural works and also features documentary films by the artist to further enhance the gallery goer’s knowledge of his activism and drive for social change in china. each piece refers to the craft and culture of both ancient and modern chinese aesthetic. ai weiwei’s time intensive and precise approach to every work is set in juxtaposition to the seemingly mass produced sensibility of each piece, resulting in a comprehensive critique of the contemporary chinese regime. the collection may be viewed as the artist’s actualized perspective of the mao cultural revolution’s effect upon the appreciation of art in chinese society. throughout the run of the exhibition, the museum is conducting a series of events to include lectures, panel discussions and film screenings to address both the artist’s works and his dedication to human rights and digital media as an outlet for freedom of expression.

‘ai weiwei has a remarkable sensibility and strength in his visual expression, which is effective in conveying a rather complex and significant content. when I met ai weiwei in his studio he had just been held under house arrest for a few days. he was calm but keenly aware that he was already in a very uncertain and tenuous situation. after the events of the past year I think that it is ever more important for elements of his political work to be present in the exhibition’ — tessa praun, curator 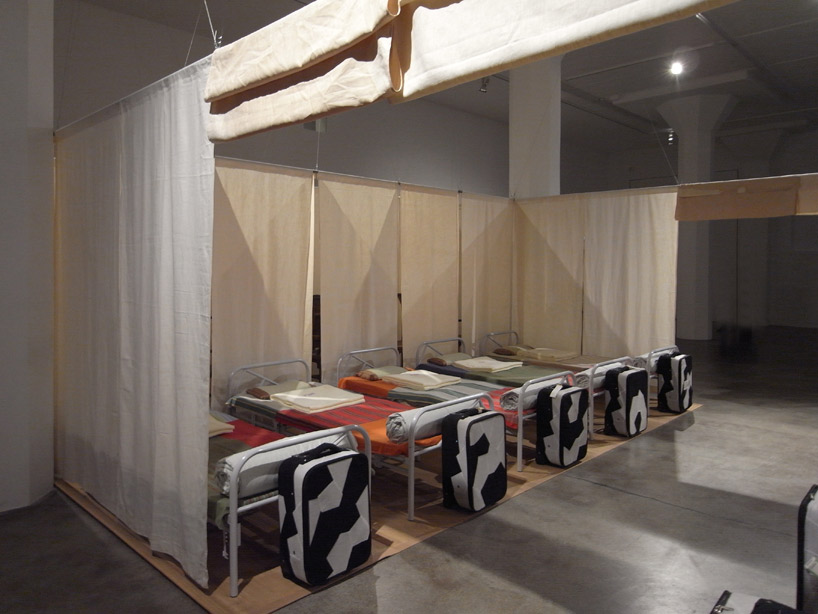 the beds are shown with the linens, suitcase, and private sitting area provided to each of the fairytale participants image © designboom

ai weiwei conceived of ‘fairytale’ in 2007. the artist hoped to bring 1,001 chinese citizens to the art festival, documenta 12, in kassel, germany. he arranged for this large group to accompany him to the fair free of charge. in addition to the cost of travel from china to kassel, ai weiwei included a ‘fairytale’ suitcase, bedding, beds in a dormitory to fit 200 individuals at a time, an antique chair from the qing dynasty (1644-1911), and spending money to each individual participant. the idea was born from ai weiwei contemplating the fables of the brothers grimm, who were from the region of kassel and have greatly influenced the way in which stories are conveyed. 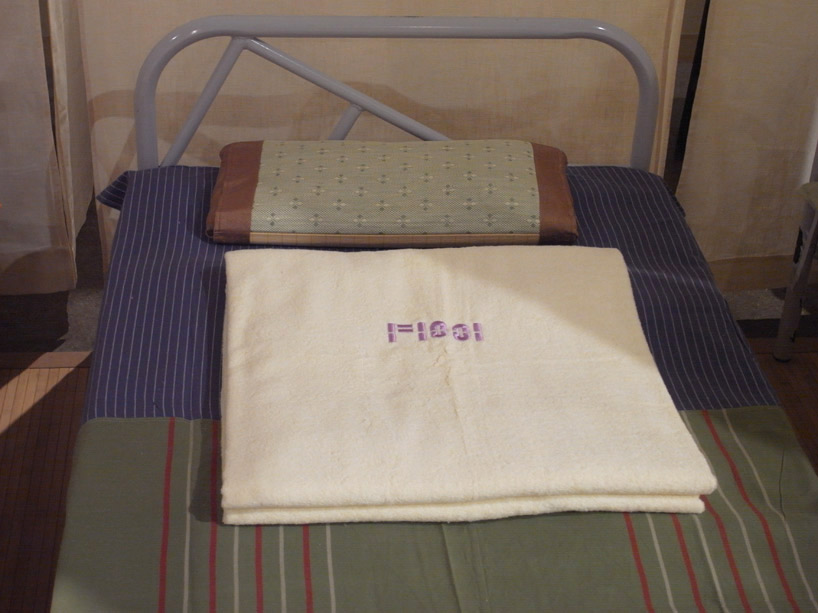 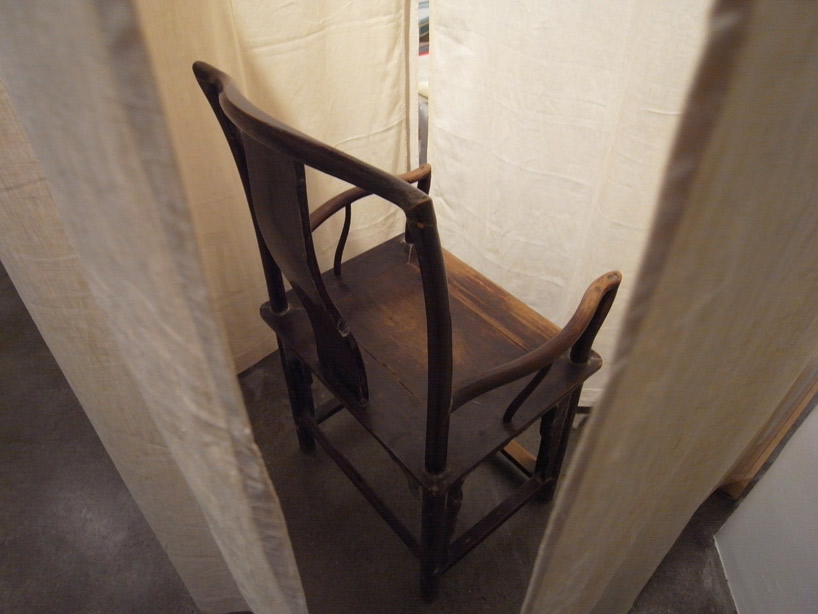 every participant was allowed private space or a bedside table in the form of an antique chair concealed by a linen curtain. image © designboom 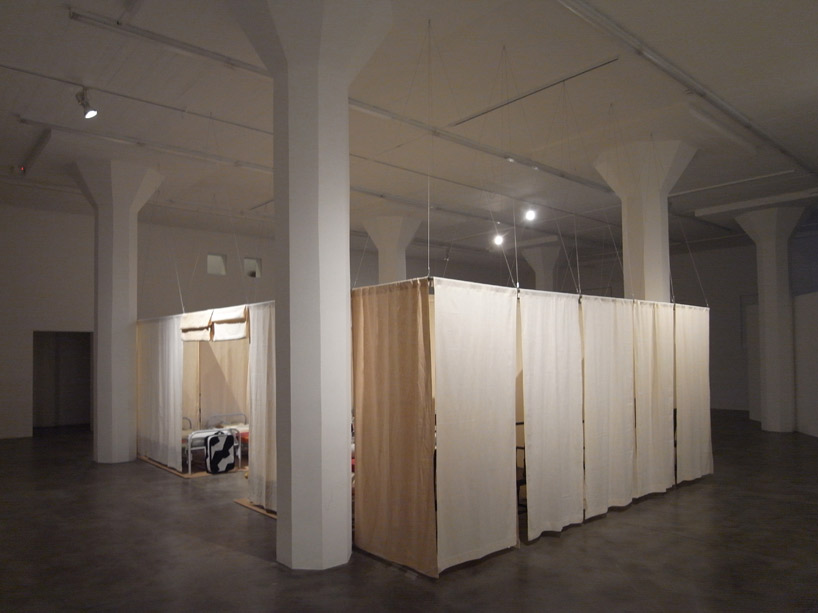 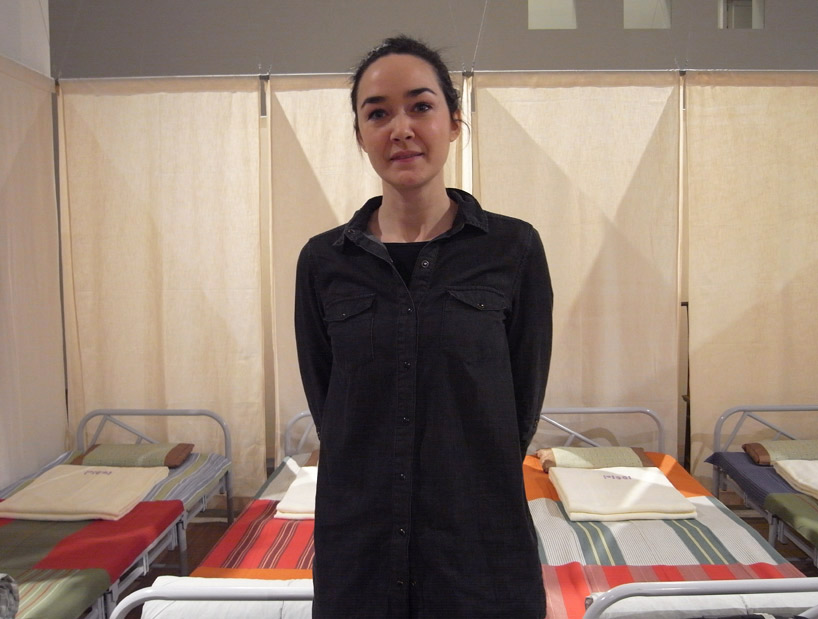 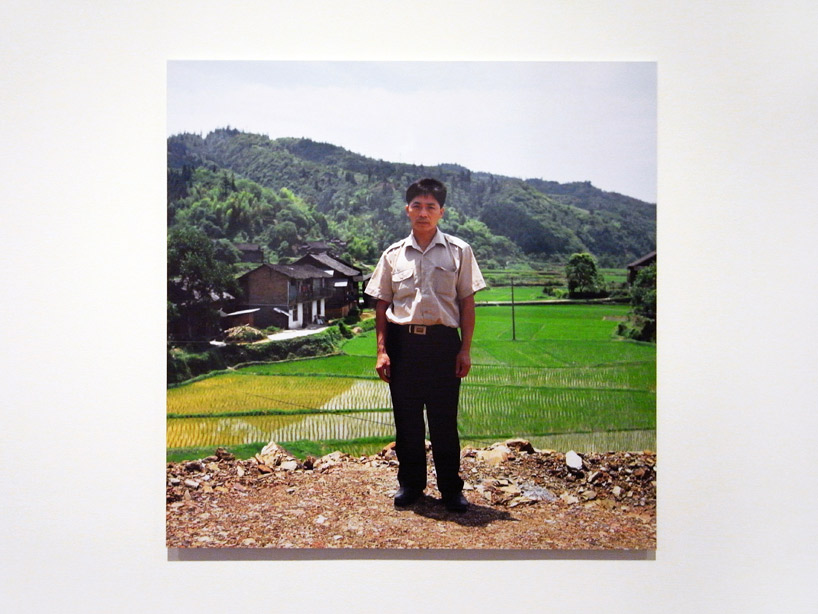 to recruit candidates for ‘fairytale’, ai weiwei wrote about his wish to invite 1,001 chinese citizens to travel with him to kassel to experience the famous art fair on his blog. from this post, he received a response from over 3,000 individuals with an interest in participating. every person hoping to accompany ai weiwei to kassel completed an application consisting of one hundred questions and in the end, 1,001 people ranging in ages 2 to 70 of varying background were selected to join ai weiwei in ‘fairytale’. while living in the dormitories, videos of interviews conducted with the selected candidates of ‘fairytale’ are made visible to those residing in the communal space. 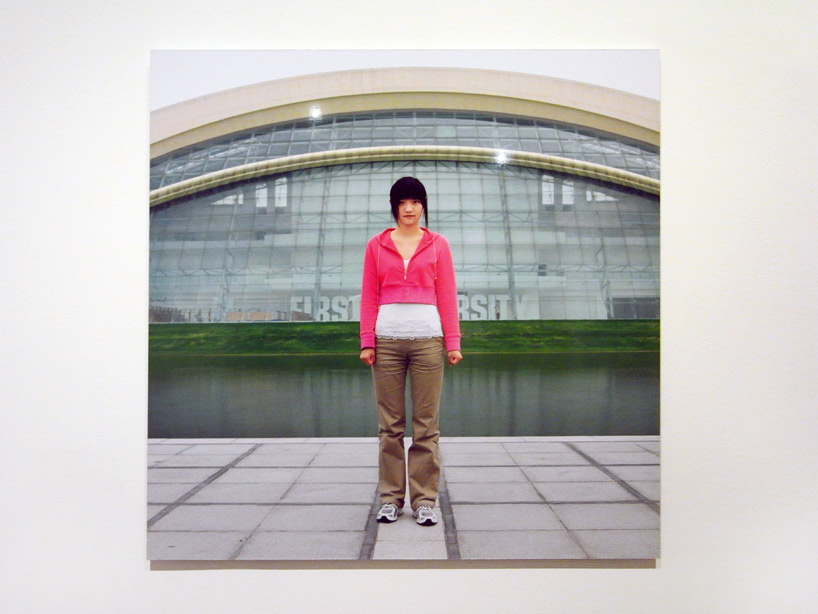 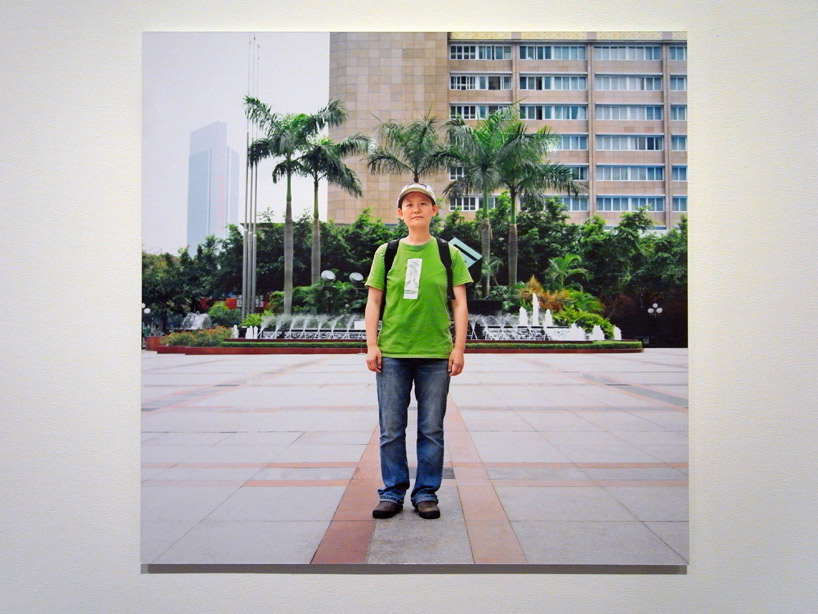 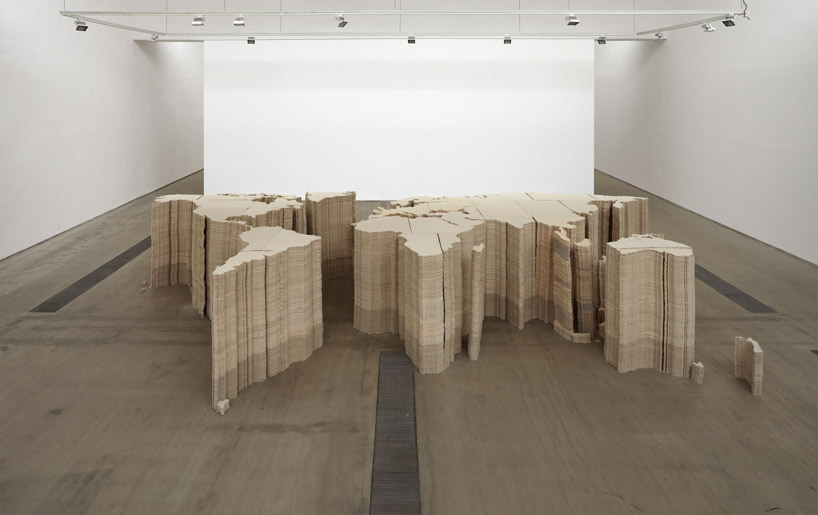 in order to create the three-dimensional work ‘world map’, over 2,000 layers of textile from a cotton manufacturing plant were placed by six to seven people, 1 cm at a time over the course of one to two weeks. the labor-intensive construction of the map is intended to illustrate china’s status as a platform for cheap labor in the textile and clothing industry. 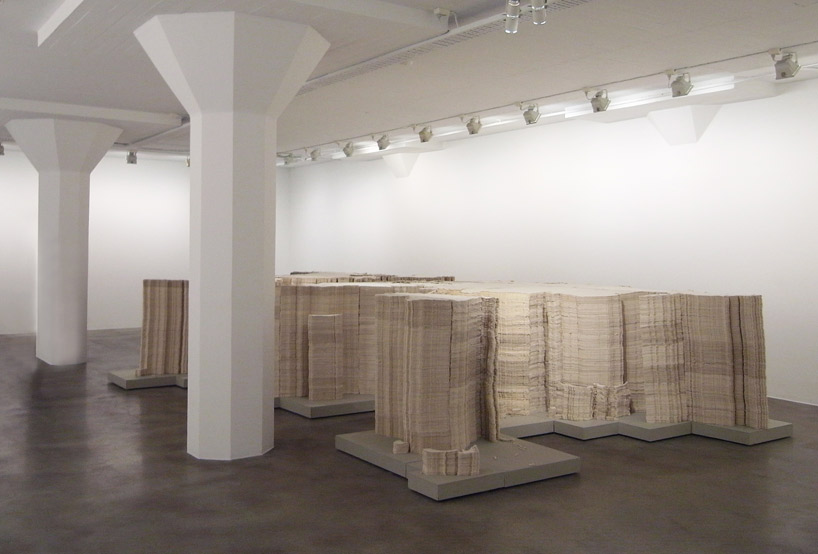 side view of the ‘world map’ image © designboom 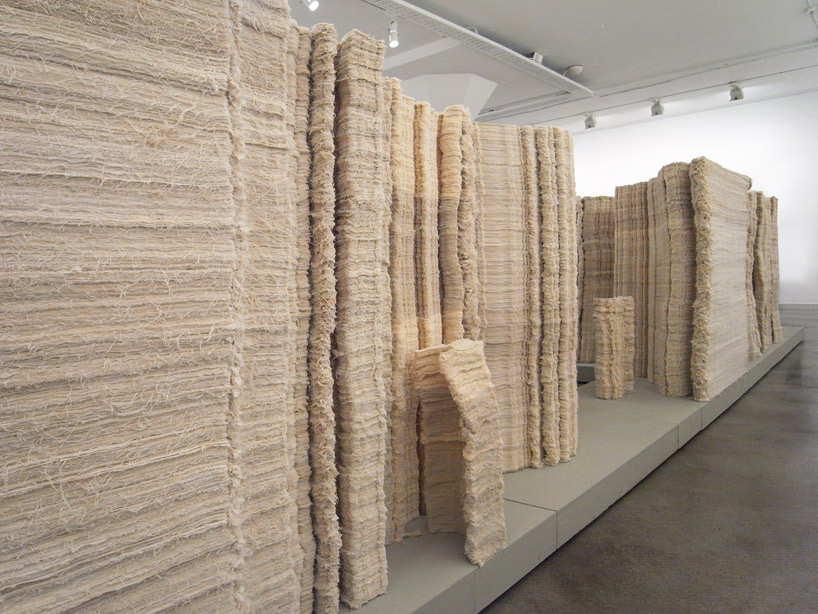 ‘china is blindly producing for the demands of the market… my work very much relates to this blind production of things. I’m part of it, which is a bit of a nonsense.’ — ai weiwei 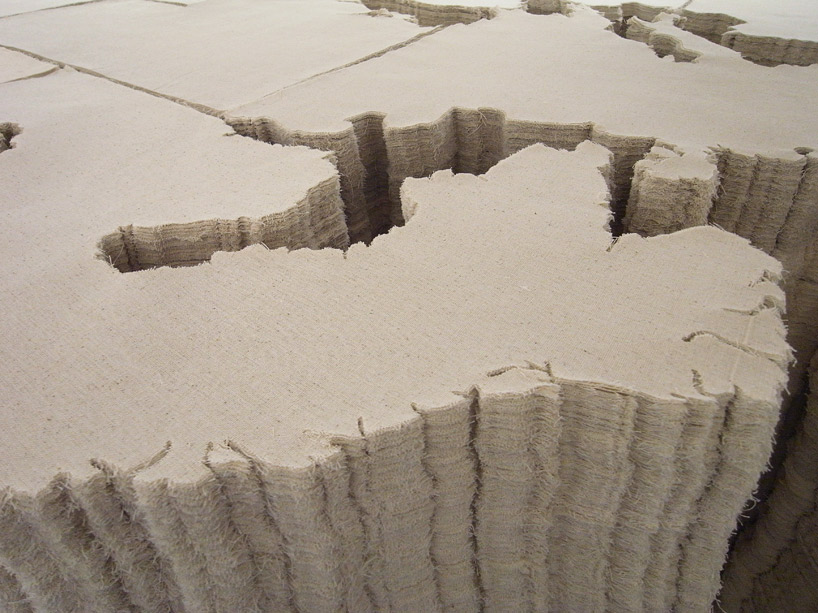 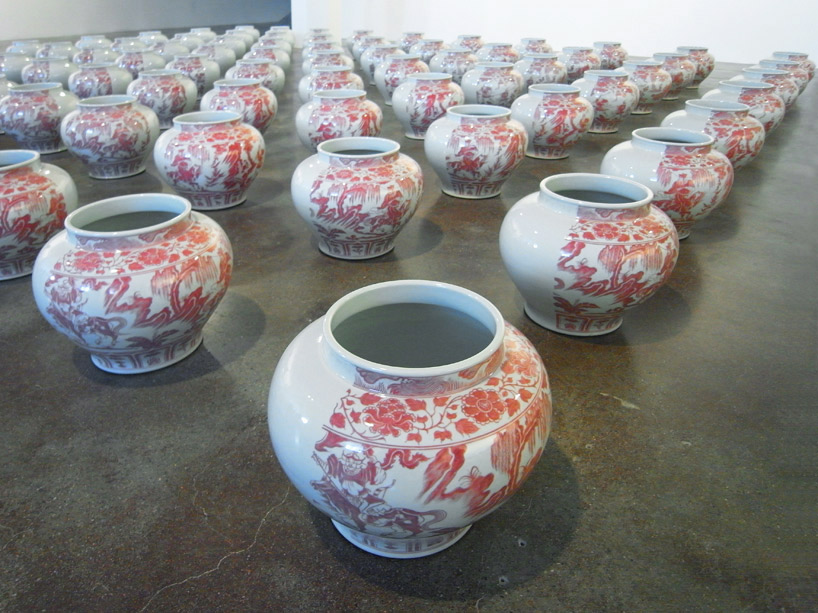 the vases were created by romanian artist serge spitzer and ai weiwei after a vase from the yuan period (1269-1368) when was sold in auction as the most expensive asian artifact to date at the time of their collaboration. the 96 components of  ‘ghost gu coming down the mountain’ depict wang yi, a historical figure of 5th century BC whose nickname was guiguzi or ‘master of the ghost valley’, in a cart drawn by a tiger and leopard. this guiguzi motif is copied from a wood-cut from the early 1320’s explaining this modified version of history and, in the case of this sculptural work, is portrayed in fragments decorating the collection of vases.

‘by repeating the motif and arranging the vases in a grid, the artist hit at mechanical production and fakes. the work stands in opposition to the traditional experience and valuing of unique artifacts because it is only when all the vases are assembled that they form the complete original motif.’ — magasin3 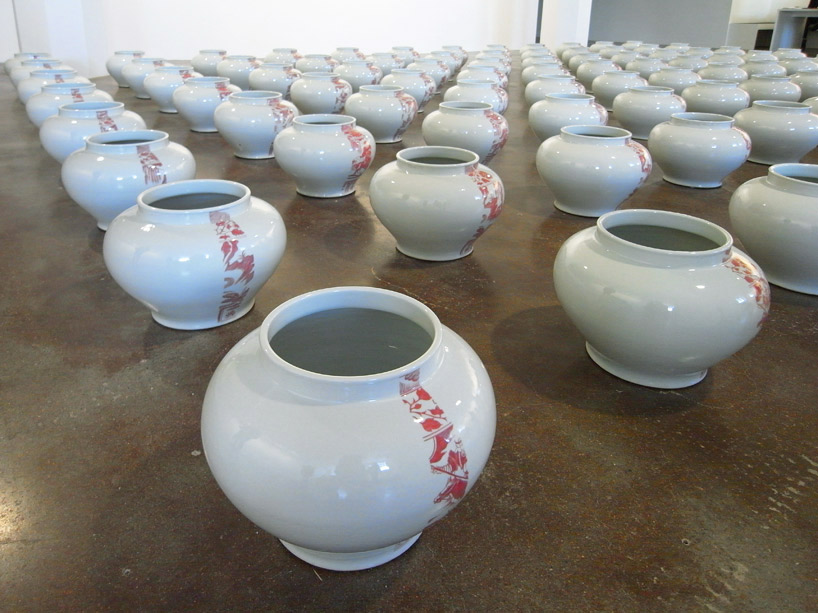 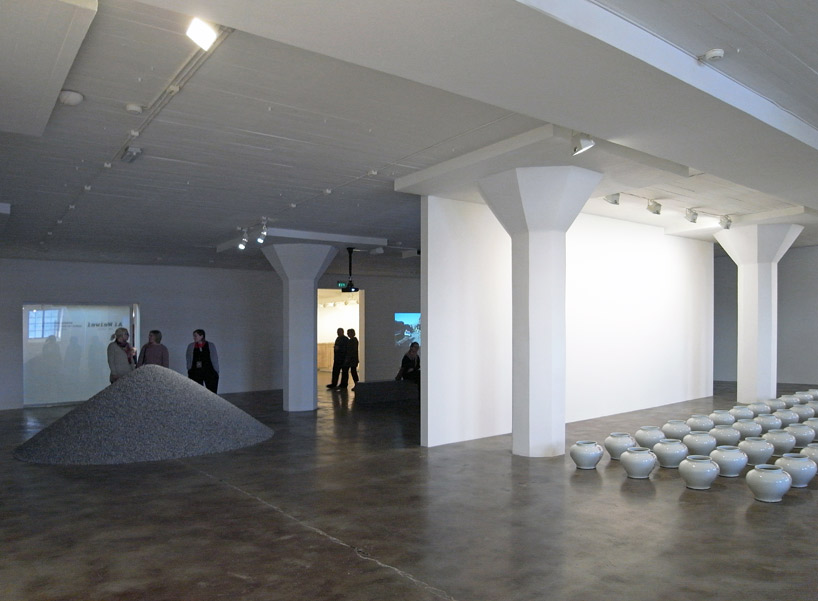 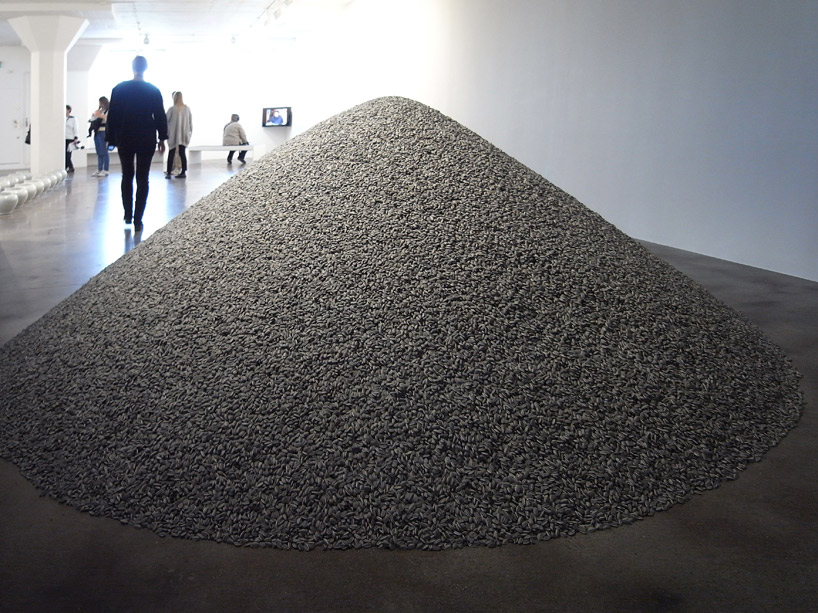 the pile of sunflower seeds in the gallery space are formed from black-painted porcelain. five tons of inedible sunflower seeds have been gathered in this quantity as the artist’s commentary of the ‘made in china’ being synonymous with mass production in the global market. each seed was formed by 160 inhabitants of the city of jingdezhen in southeastern china where the population is known for their production of the highest quality porcelain. the sunflower seed installation, also made in 500kg and 10 ton versions, was formed using traditional methods of artisan porcelain manufacturing over the course of two and a half years. as each of the million pieces of porcelain are formed for this work, the individual is emphasized as a critical component to the idea of the masses. in 2010, ai weiwei produced a sunflower seed sculpture covering the entire floor of turbine hall of tate modern in london. see designboom’s coverage here. 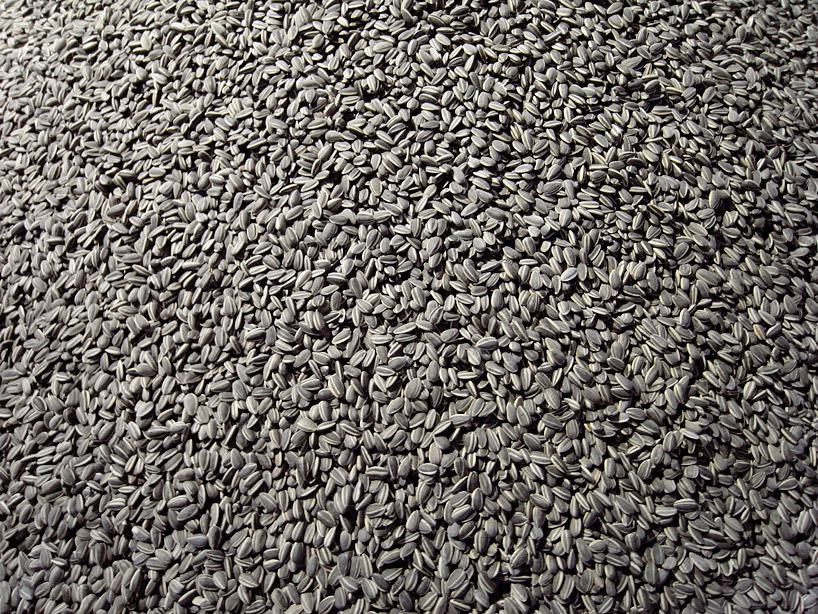 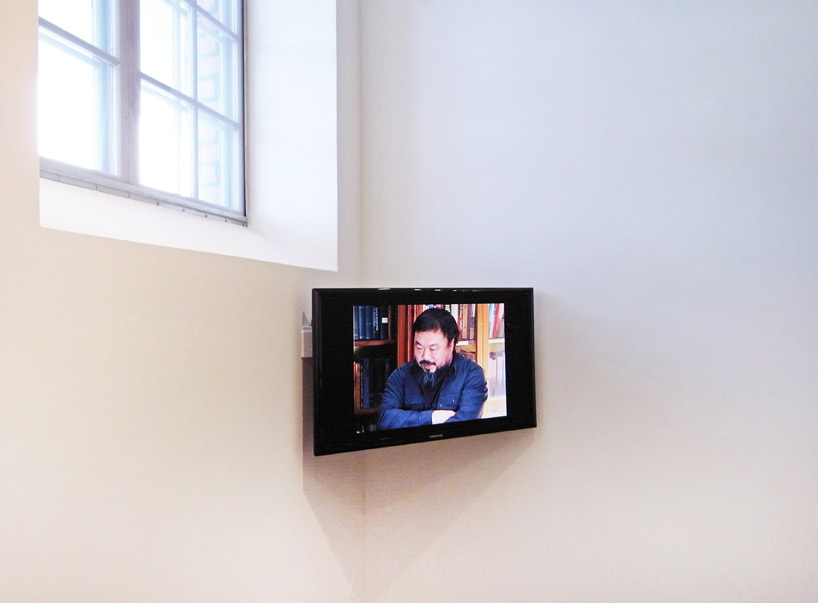 ‘so sorry’ depicts the escalation of tension between ai weiwei and the chinese government. the film critiques the empty apologies corporations and governments offer after a great mistake or in the wake of tragedies by documenting an investigation started by the ai weiwei studio to identify all of the students who died during the sichuan earthquake of 2008. the artist’s studio created the film as a means to draw a connection between the presumed corruption existing in the sichuan government contributing to poor building construction unable to withstand an earthquake of moderate magnitude. as this cinematic exploration was being created, ai weiwei and the chengdu police had several violent confrontations. after being beaten by the police, ai weiwei traveled to munich to prepare his exhibition at the museum haus der kunst but was rushed to surgery due to a brain hemorrage sustained in this run-in with the police. ‘so sorry’ seeks to explain these events and the markedly increased effort to quiet this very outspoken artist/activist. 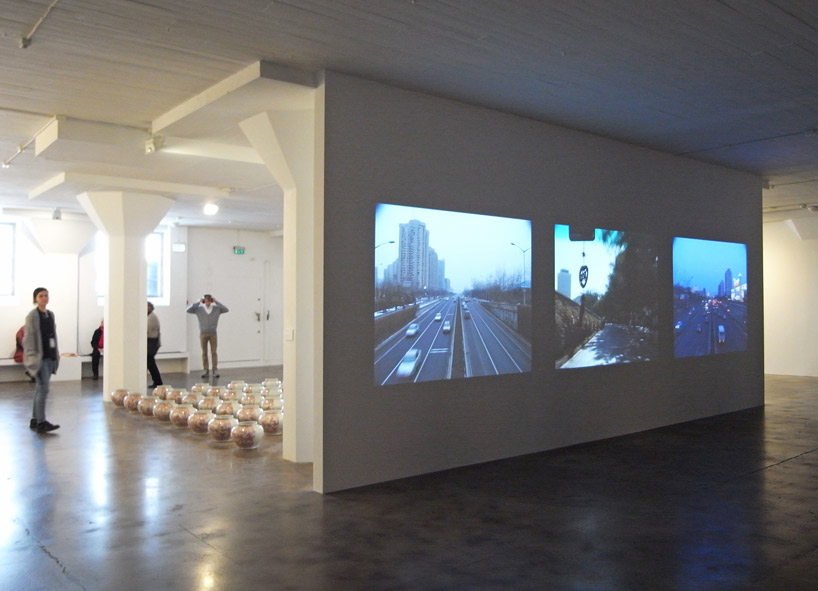 the three beijing films projected on one wall within the gallery space document the city at varying points of light and busyness — constructing a visual to explain the ultra-modern and urban reality of contemporary beijing.

artwork for the exhibition image © designboom