chinese artist and activist ai weiwei presents his first institutional exhibition in los angeles with new and unseen work. on view at marciano art foundation until march 3, 2019 is his latest, ‘life cycle’ — a sculptural response to the global refugee crisis. the exhibition will present the iconic 2010 installation ‘sunflower seeds’ and the 2015 ‘spouts.’ the refugee crisis has seen the use of makeshift inflatable boats of black pvc rubber. with ‘life cycle,’ ai presents a reinterpretation of the boat using the traditional techniques of chinese kite-making, exchanging the pvc rubber for bamboo. 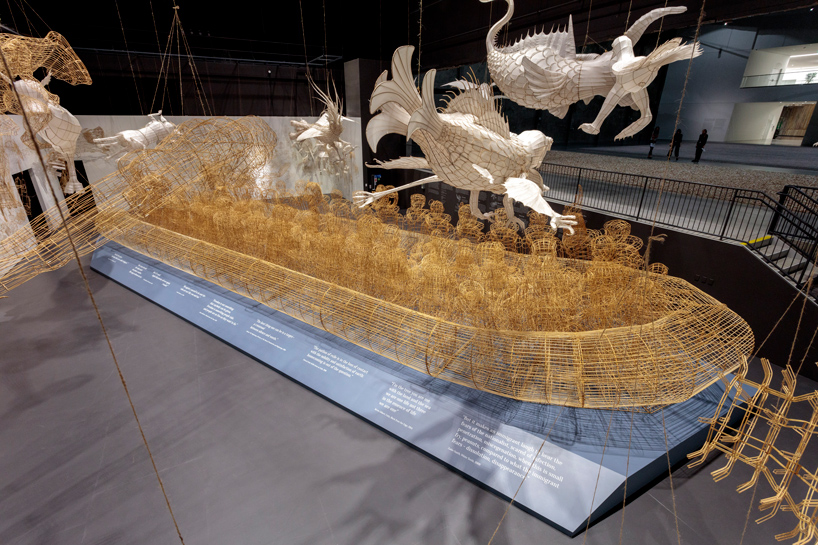 all images by joshua white

suspended around ai weiwei’s boat installation at LA’s marciano art foundation are figures crafted from bamboo and silk. ai weiwei began creating such figures in 2015 based on mythic creatures from the shan hai jing — or classic of mountains and seas — a traditional chinese text which dates back to the 4th century B.C. these works are crafted in weifang, a chinese city in with a tradition of kite-making dating back to the ming dynasty (1368–1644). 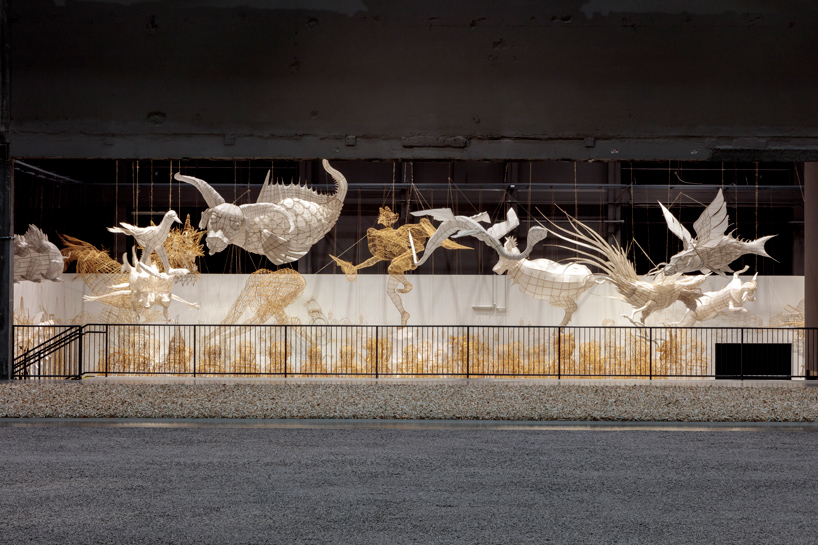 this multifaceted installation is a continuation of ai’s ongoing engagement with politics and social justice. it follows the release of his feature-length documentary, human flow (2017), which depicts the refugee crisis on film. in february 2018, the artist writes, ‘I was a child refugee. I know how it feels to live in a camp, robbed of my humanity. refugees must be seen as an essential part of our shared humanity.’ 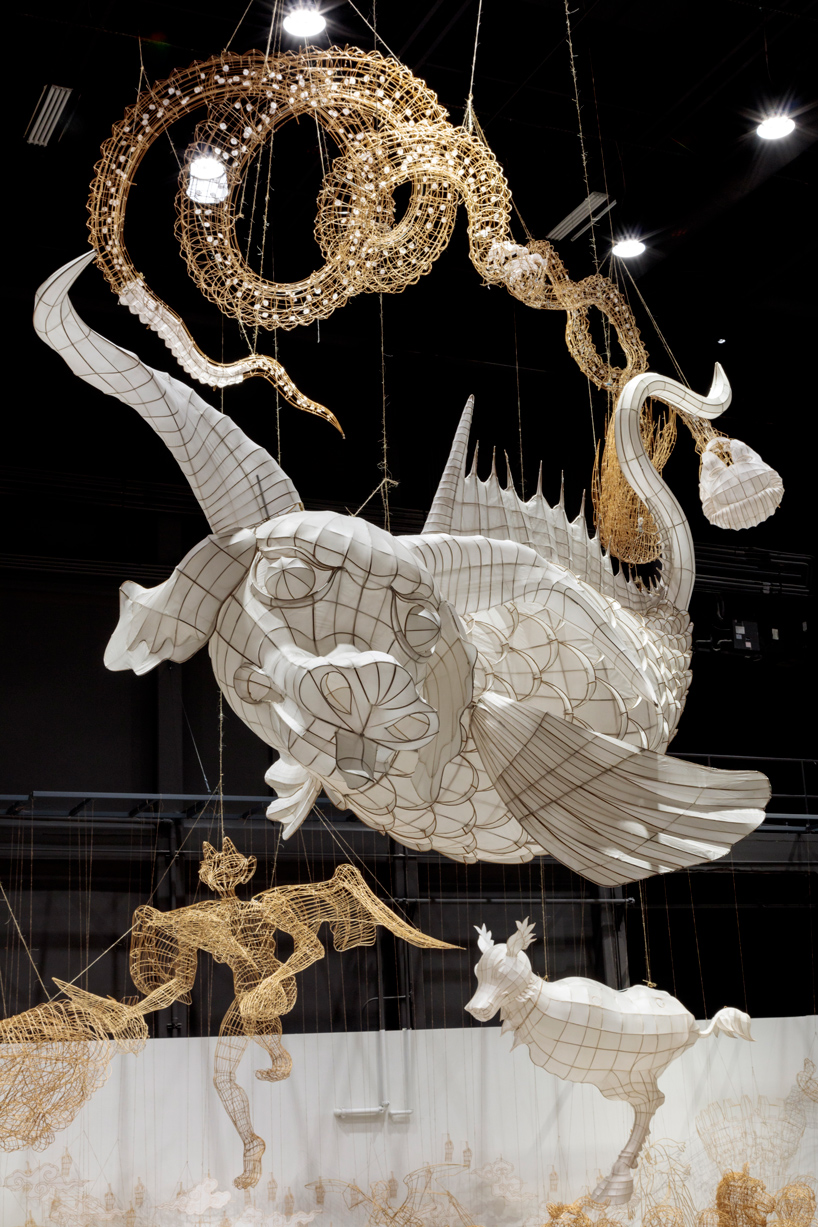 windows (2015), which hangs along the perimeter of the black box, draws from chinese mythology, the tales and illustrations of the shanhaijing, the history of 20th-century art, and the life and works of the artist. the vignettes feature a dense mix of biographical, mythological, and art historical references to craft a contemporary story. the various scenes include the mythic creatures of the shan hai jing alongside ai’s earlier works of bamboo. the theme of free speech which runs throughout the presented work shows ai’s efforts in defending it. motifs recurring in the artist’s practice—the bicycle, the alpaca, symbols of state surveillance and control—are repeated and multiplied. 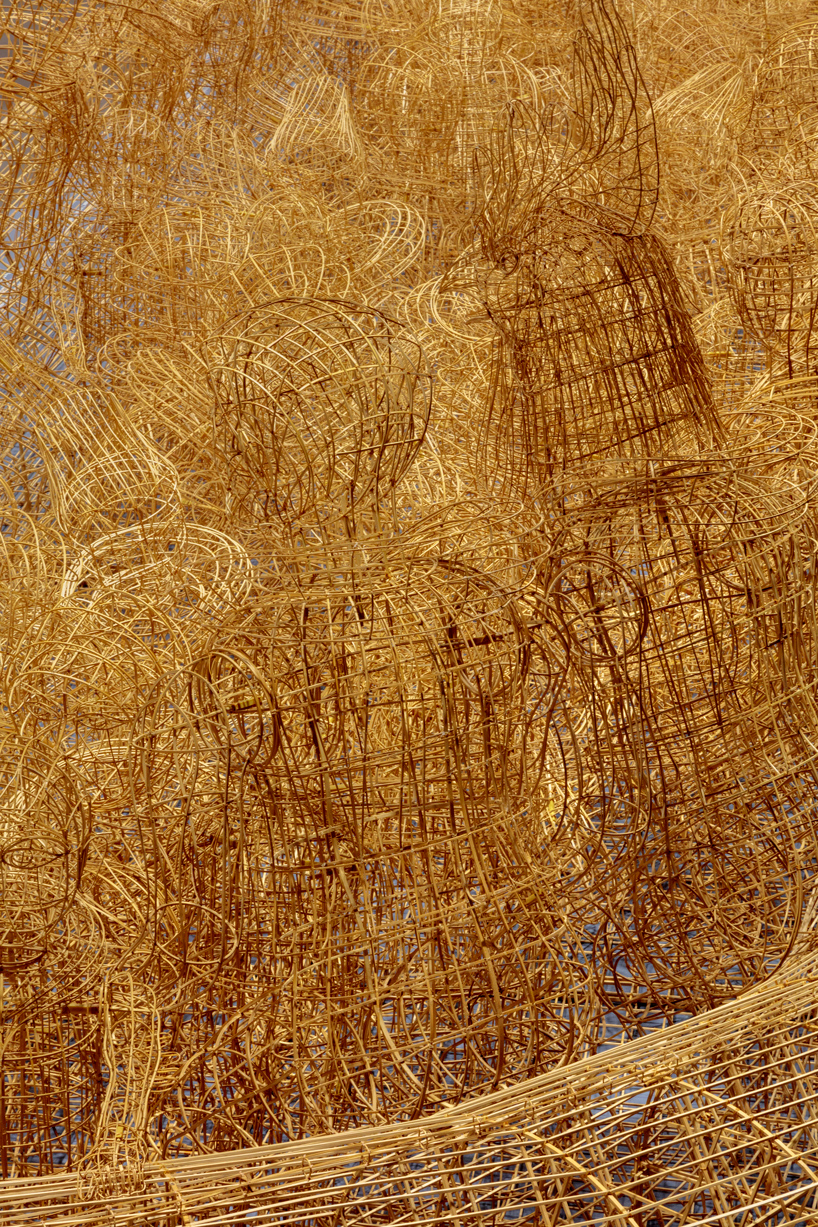 maurice marciano, founder of marciano art foundation says: ‘we are honored and thrilled to be able to host ai weiwei’s first institutional presentation in los angeles. ai weiwei’s long history as a thoughtful, engaged, and provocative artist falls directly in line with the goals of the foundation. we are so thrilled to be a part of his big moment happening in our city this fall.‘ 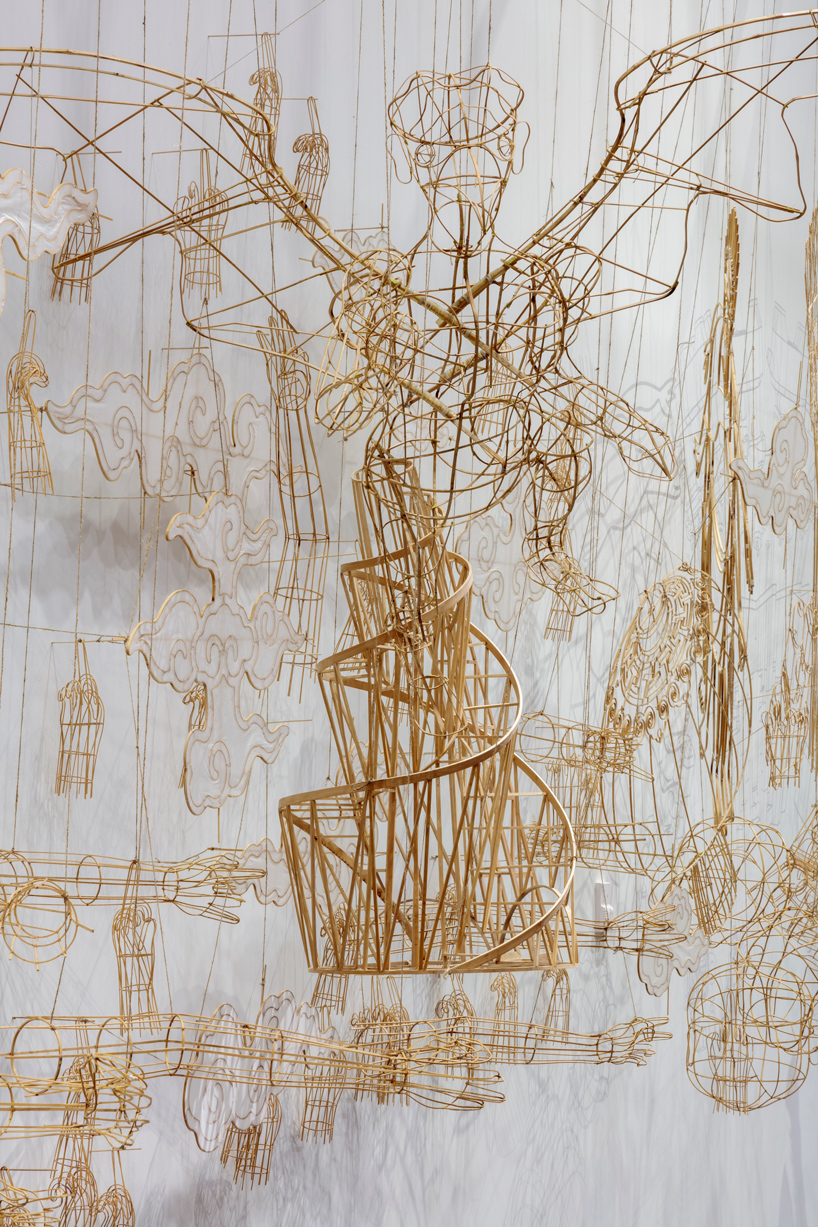 49 tons of individual porcelain sunflower seeds make up the 2010 installation ‘sunflower seeds.’ these seeds are crafted by 1600 artisans of an ancient porcelain production center in jingdezhen, china. the installation further expands upon reoccurring themes, such as authenticity, the individual’s role in society, geopolitics of cultural and economic exchange. the work also brings to mind propaganda posters of 20th century cultural revolution which depict chairman mao zedong as the sun and the citizens as sunflowers turning toward him. 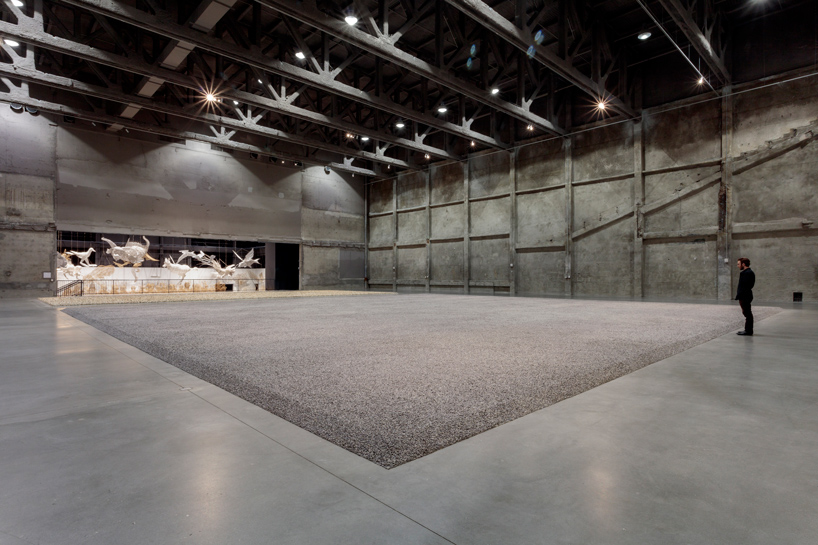 ‘spouts’ (2015) piles together thousands of antique teapot spouts dating as far back to the song dynasty (960–1279). following ai’s practice of repetition and multiplication, spouts serves as a metaphor for a mass of mouths, and a widespread yearning for freedom of speech despite its continuing restriction throughout many societies. spouts was previously exhibited in galleria continua in beijing and the sakip sabanci museum in istanbul. this is the first time the complete work is on view. 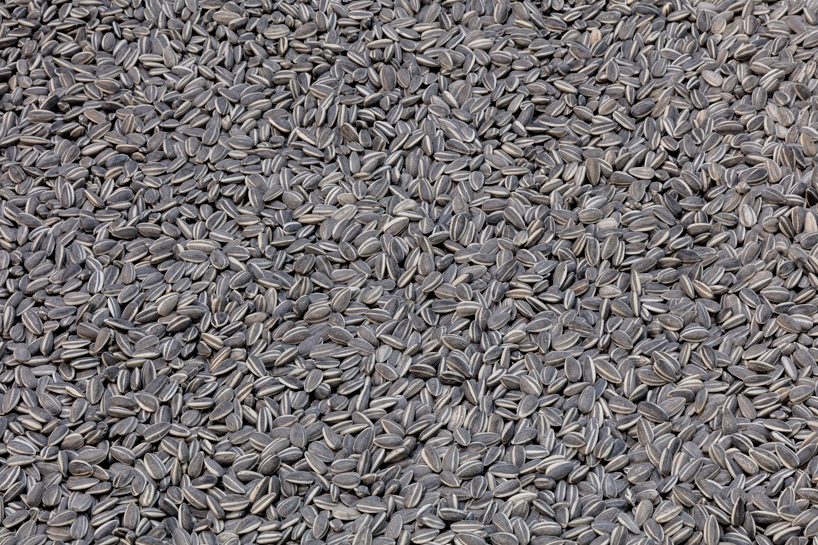 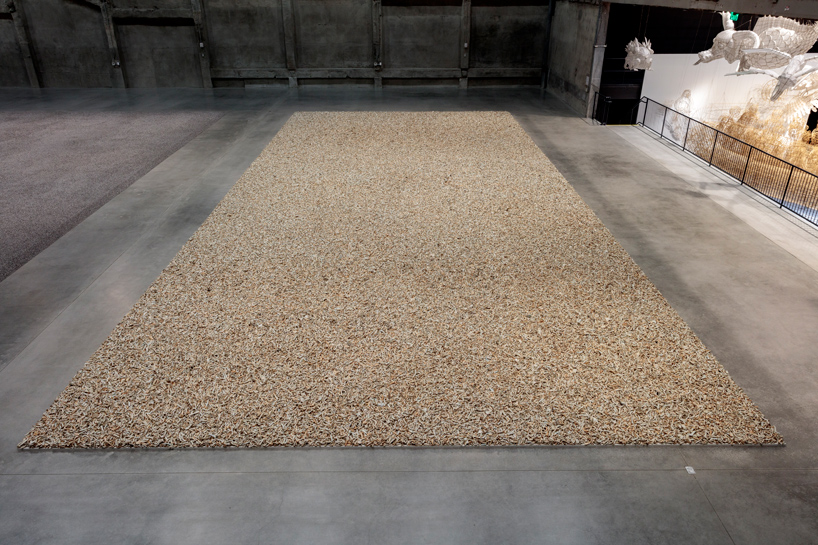 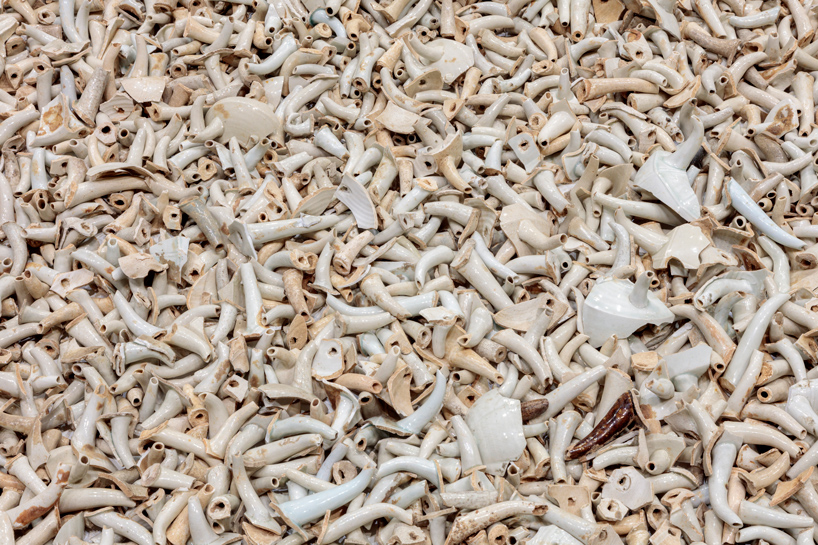 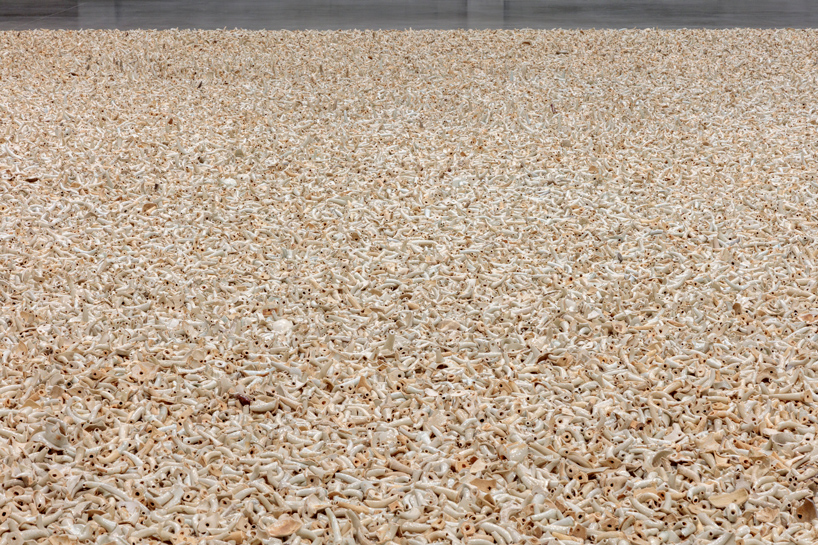 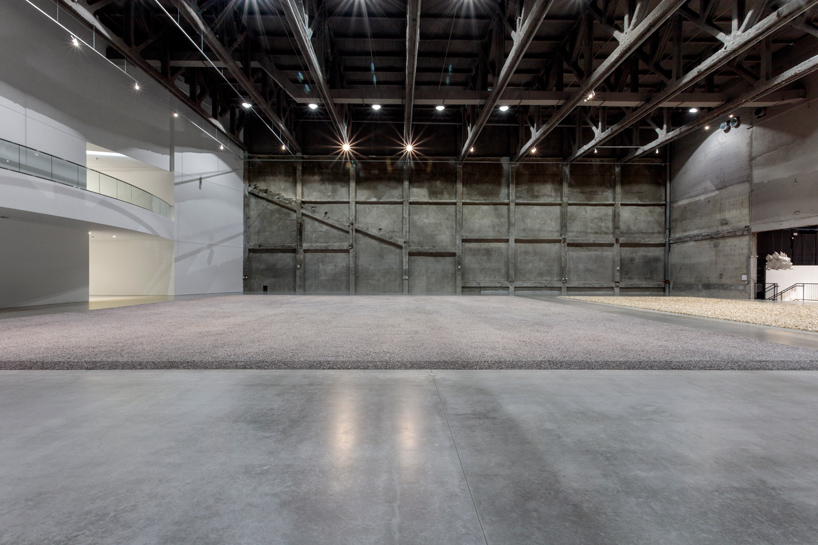