since the late 18th century, tarot cards have been used by mystics and curious commoners alike as a pathway to mental and spiritual answers. the rider-waite deck — originally designed in 1909 by artist pamela colman smith — is one of the best known illustrative examples to depict the set of supernatural scenes. with smith’s drawings in mind, belgian photographer alice smeets set out to recreate the spirit of the cards in reality, using the backdrop of haiti, found materials and the local community in the project’s realization. 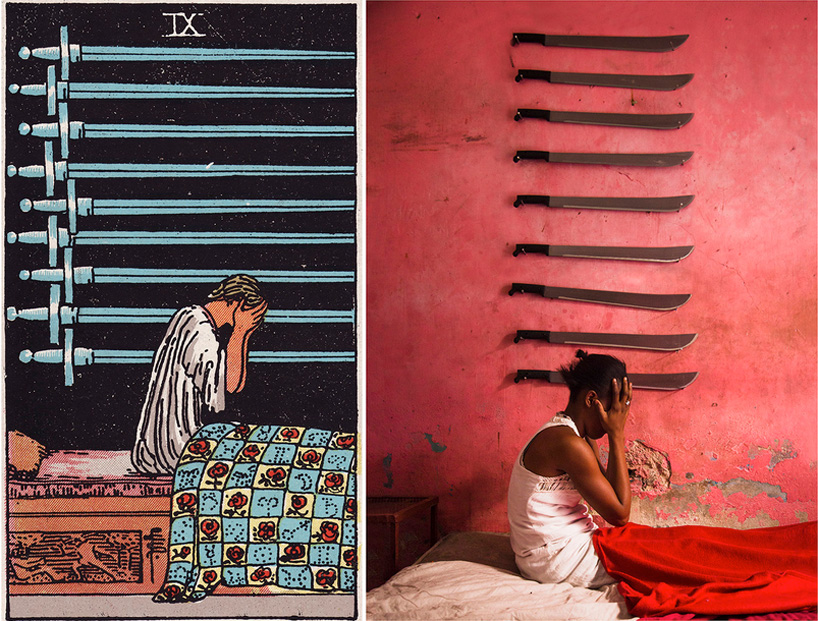 the ‘9 of swords’ is recreated in a red-painted bedroom

‘the ghetto tarot’ is a photographic interpretation of the traditional tarot deck, replicated together with a group of artists called ‘atis rezistans’ in the haitian slums of port-au-prince, using only locally sourced materials. for example, the lantern seen in ‘the hermit’ is created out of a old metal can and the black cat for ‘the queen of wands’ is made out of used car tires. works created by several of the ‘atis rezistans’ have been additionally incorporated into the scenes, including symbolism from the voodoo religion that adds to the meaning of the cards’ original motifs. 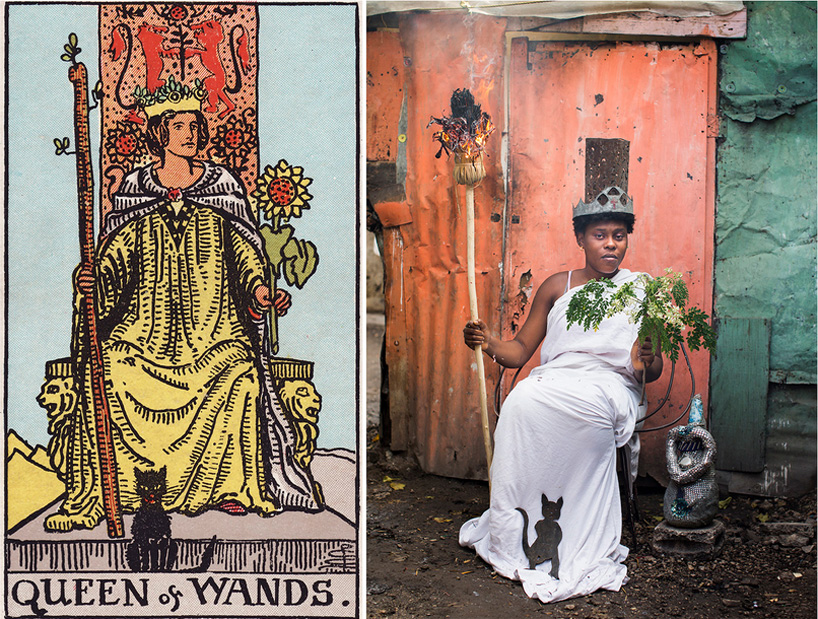 my aim was to create a very personal deck without loosing the different spirits of the cards’, smeets says. ‘then the idea entered my mind to combine three of my passions: the spiritual world, the haitian culture and people as well as the philosophical reflections about the dualities in our world; in this case rich and poor. moving away from the clichéd images of poverty, illustrating the spirits and meanings of the cards with a touch of humor in the middle of the slum and showing colored people for the first time on the traditional, old European cards to break stereotypes.’ 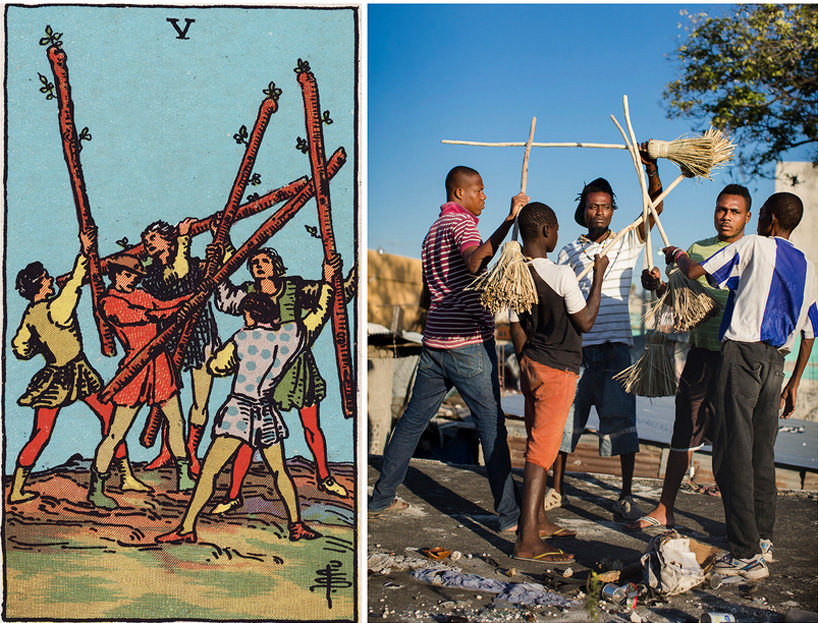 five haitian youths recreate the ‘5 of wands’ with broomsticks 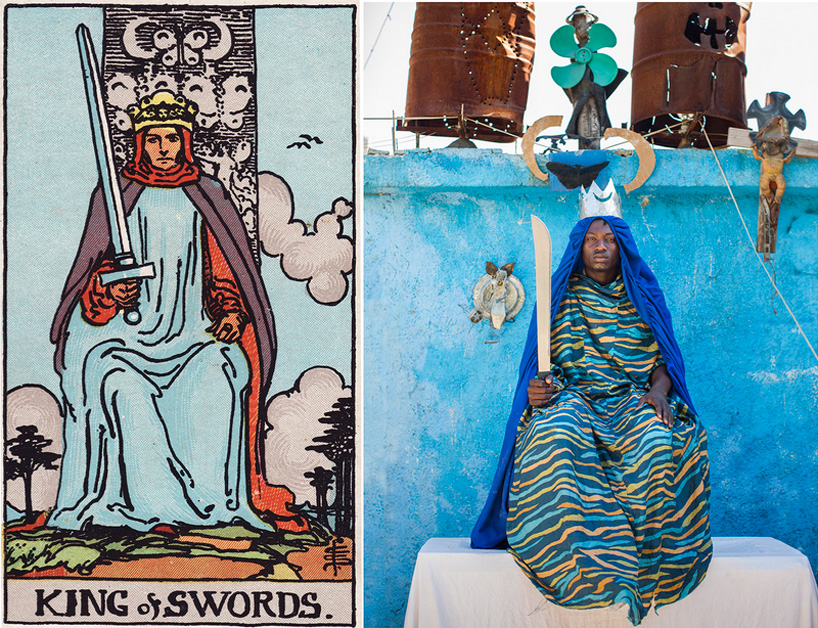 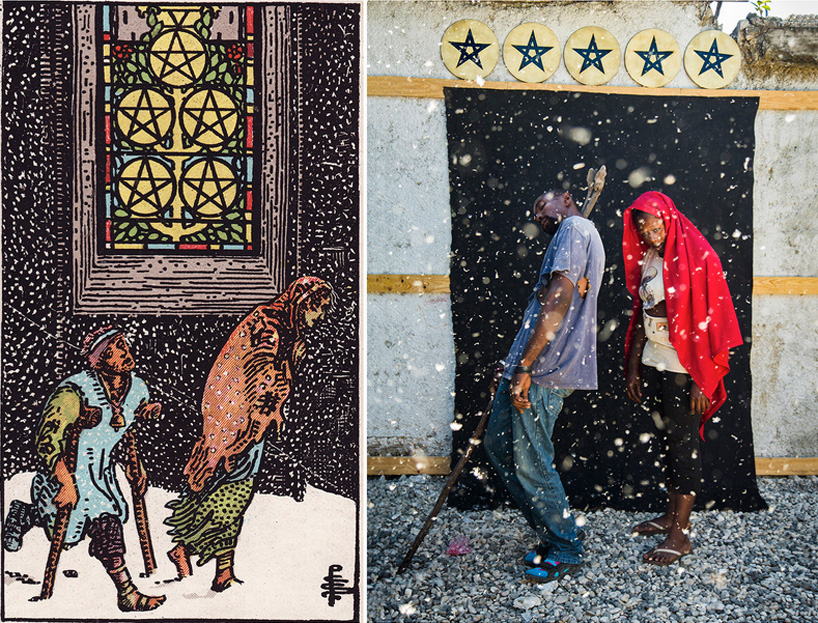 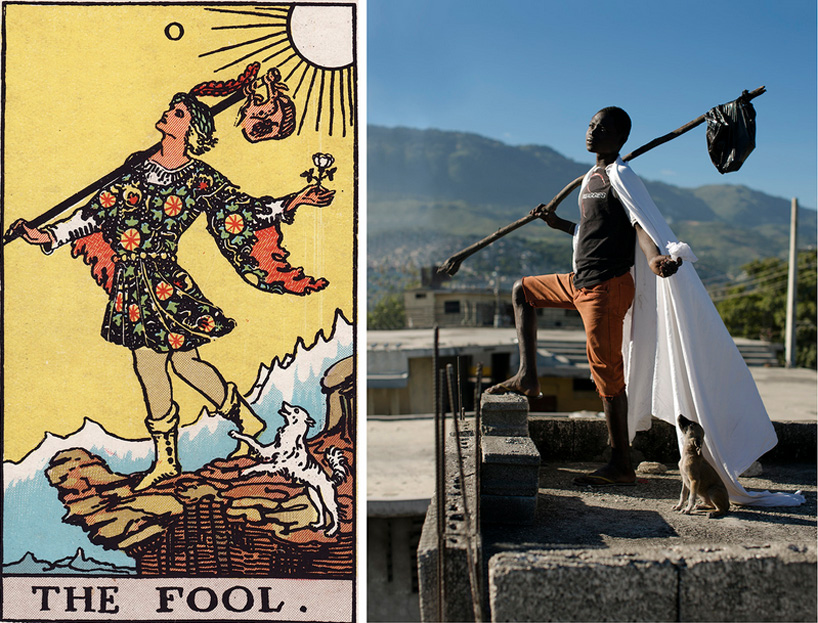 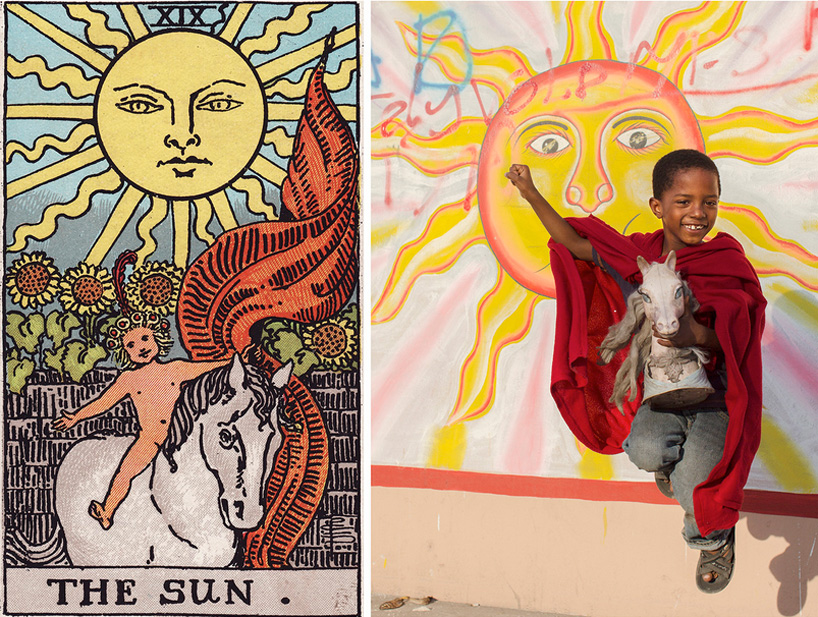 the child recreates ‘the sun’ on a white plastic pony 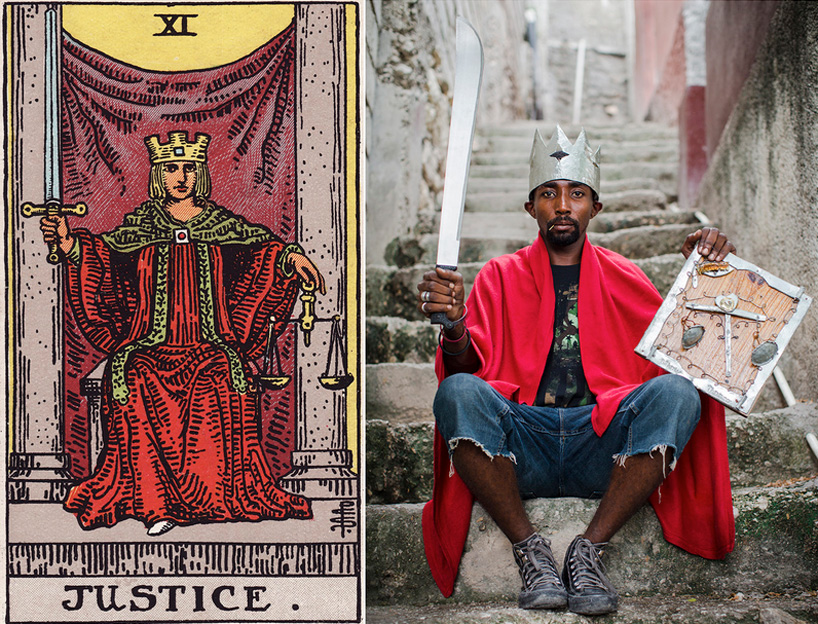 ‘justice’ is represented by the artist, holding up his on works in the scene 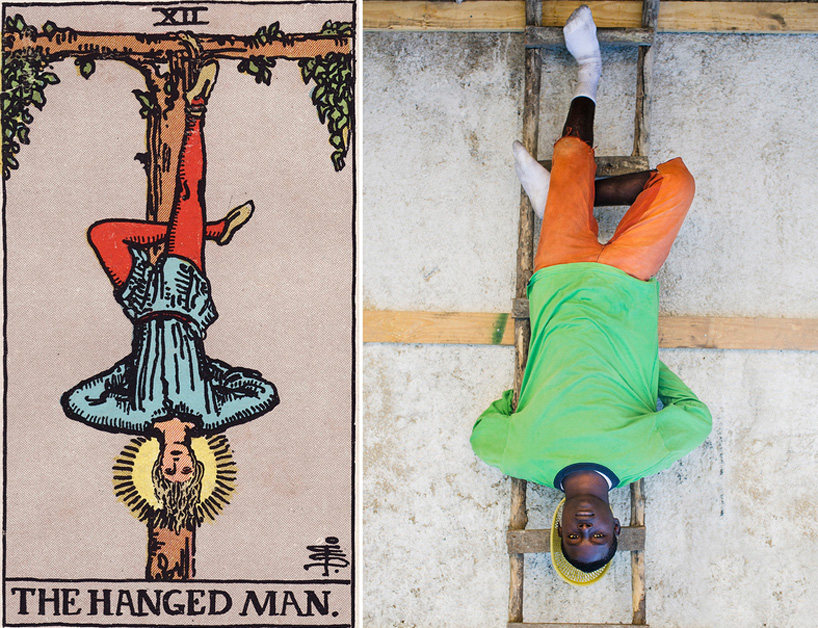 ‘the hanged man’ is recreated simply on a ladder 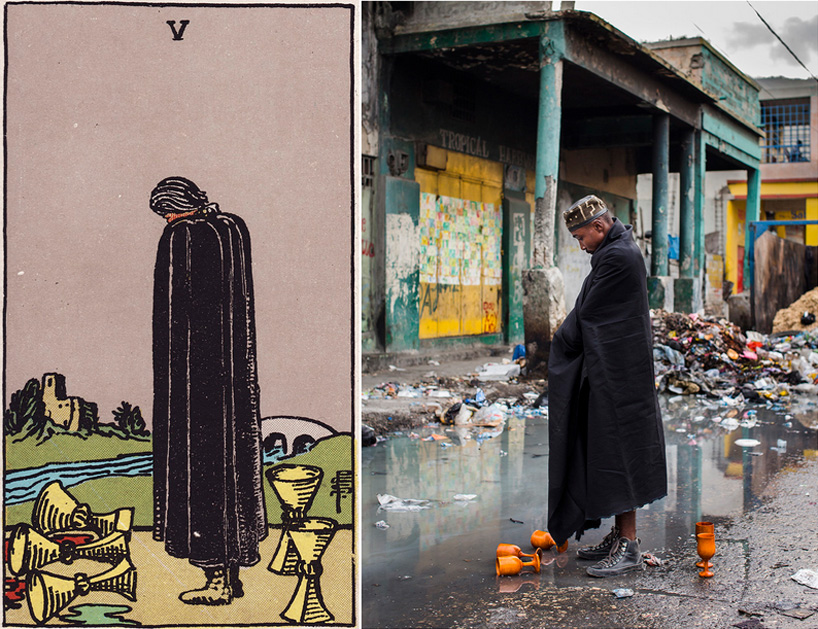 surrounded by trash, the haitian artist recreates the ‘5 of cups’ 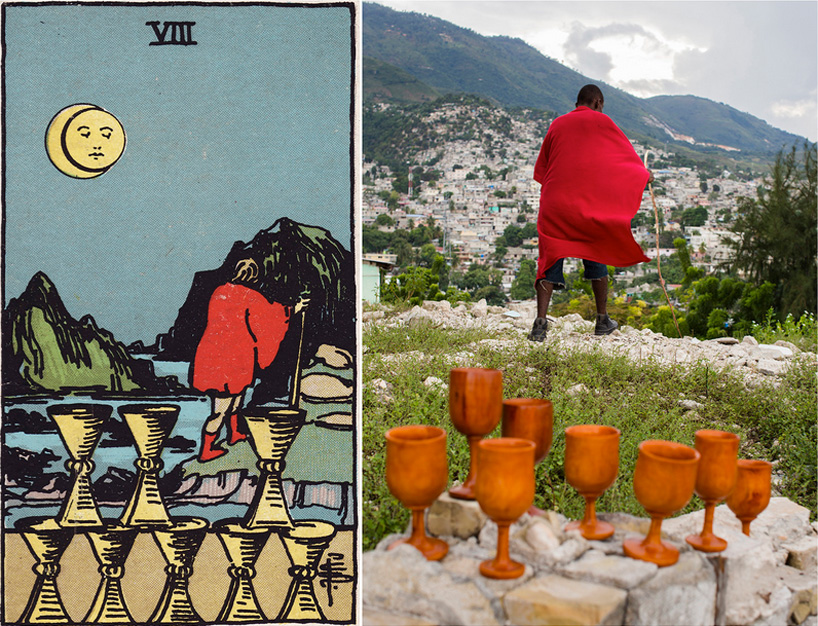 ‘8 of cups’ is photographed on a hilltop in haiti