commissioned by lisa d. frieman, senior curator of the indianapolis museum of art, collaborative artists jennifer allora and guillermo calzadilla created six works for the US pavilion at the venice art biennale 2011: ‘body in flight (american),’ ‘body in flight (delta),’ ‘algorithm,’ ‘track and field,’ ‘armed freedom lying on a sunbed,’ and ‘half-mast/full-mast’. titled ‘gloria,’ the exhibition references grandeur with each of the multimedia works, whether it is military, religious, olympic, or economic. using paradoxical and often absurd aesthetic forms to provoke discussion of critical contemporary issues, the artists demonstrate the central american principle of freedom of speech and the importance of resulting dialogue and debate. 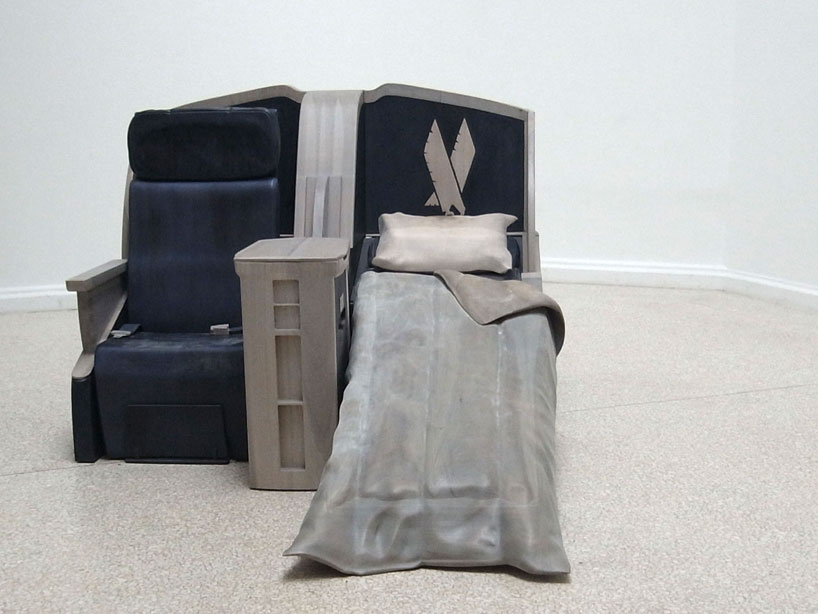 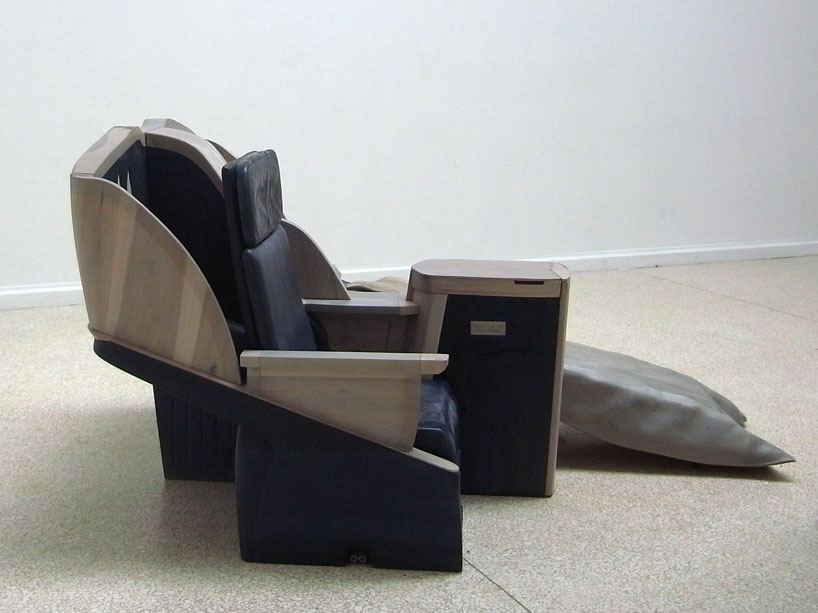 a performance of ‘body in flight (american)’ 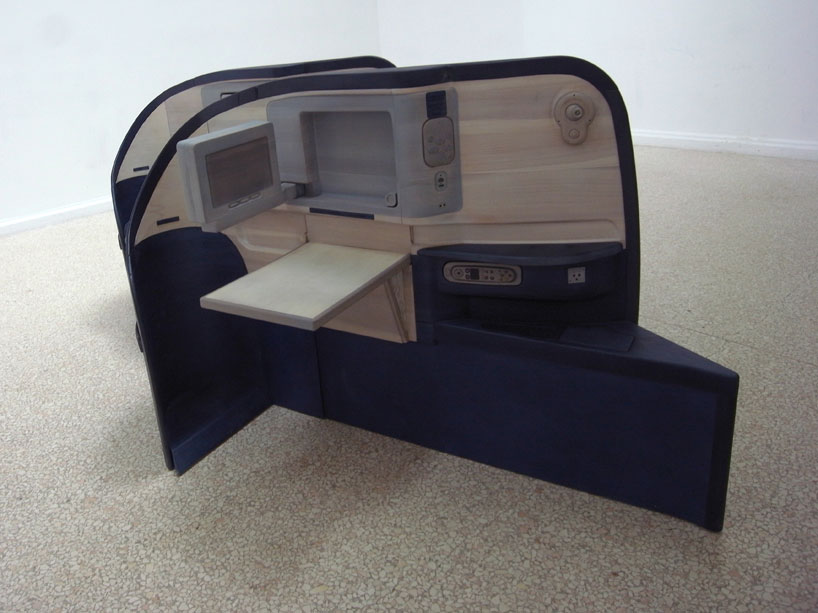 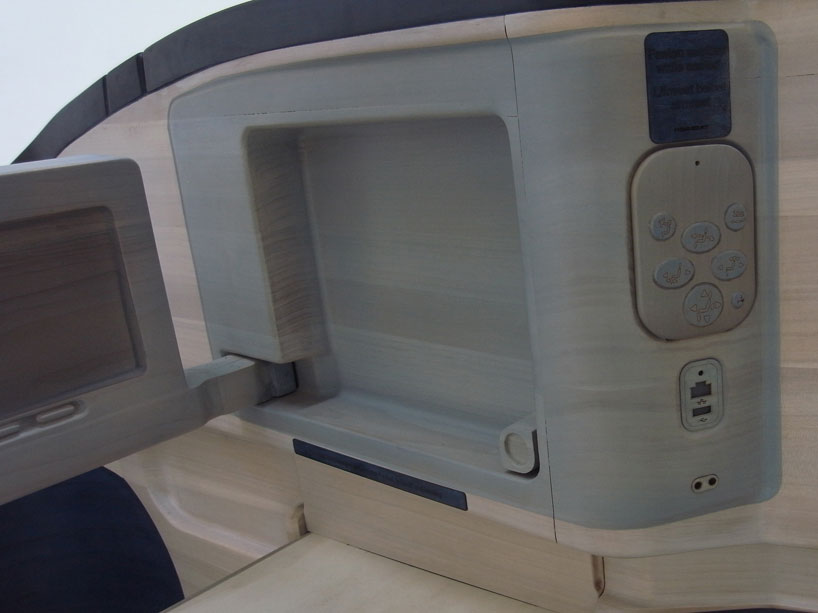 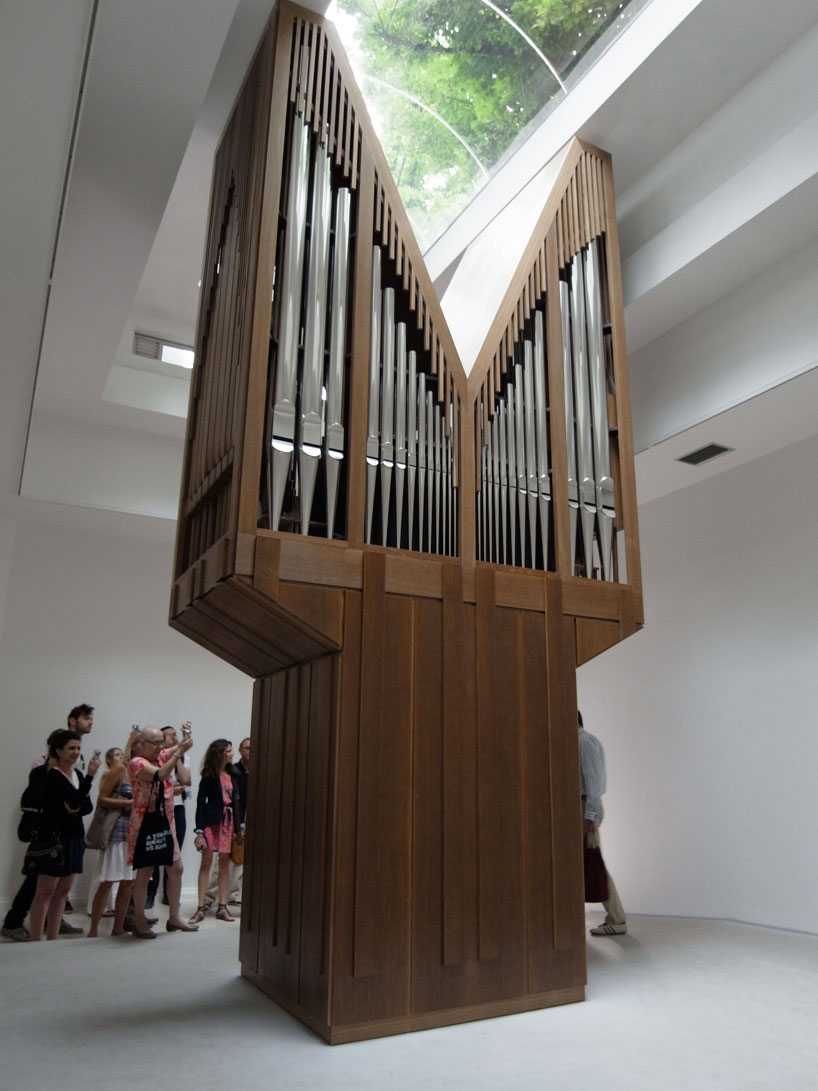 a nearly 20-feet tall interactive sculpture, ‘algorithm’ combines a custom-made pipe organ with an automatic teller machine (ATM). replacing the typical organ’s internal components, the ATM sits inside the organ and takes on its musical functions with corresponding parts such as card reader, keypad, and cash dispenser. scored in collaboration with composer jonathan bailey, the work’s collection of sounds provides a unique musical soundtrack for each financial transaction. 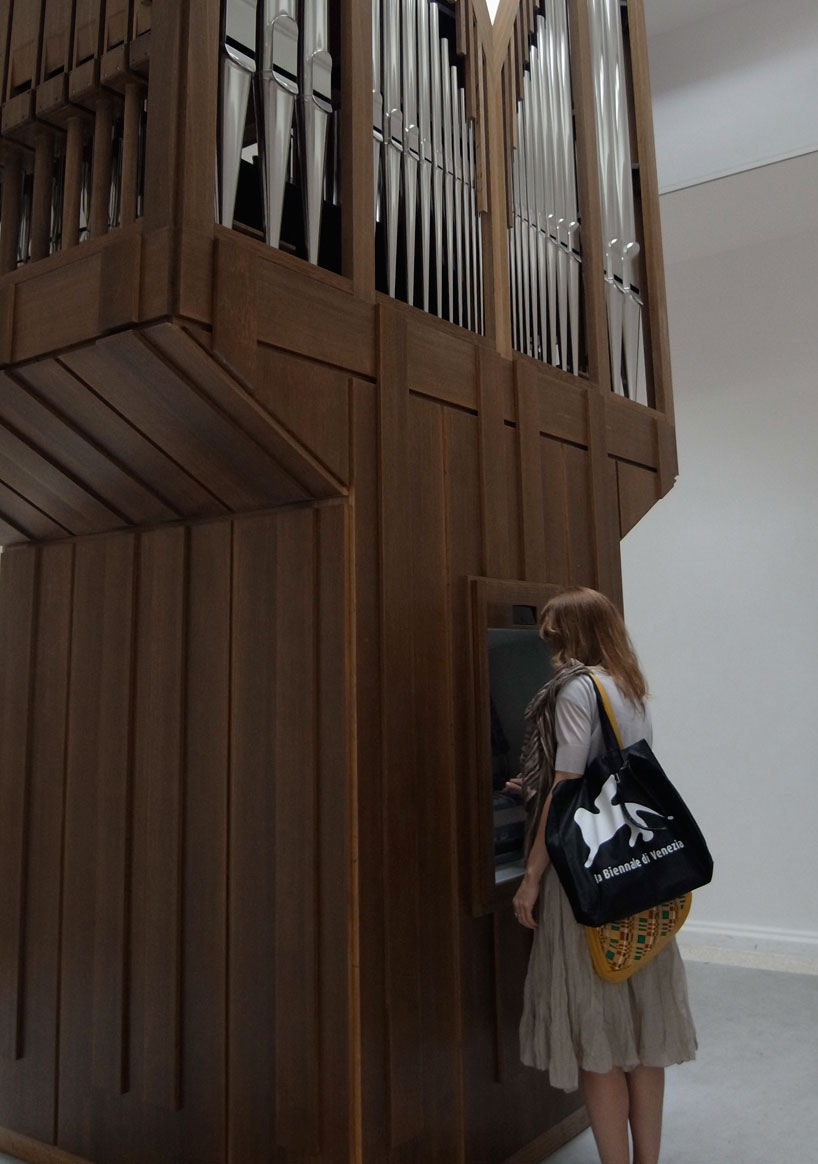 ‘algorithm’ is both a pipe organ and a fully functioning ATM machine. when art lovers withdraw euros from the work, they find themselves engulfed by booming hymn-like chords. 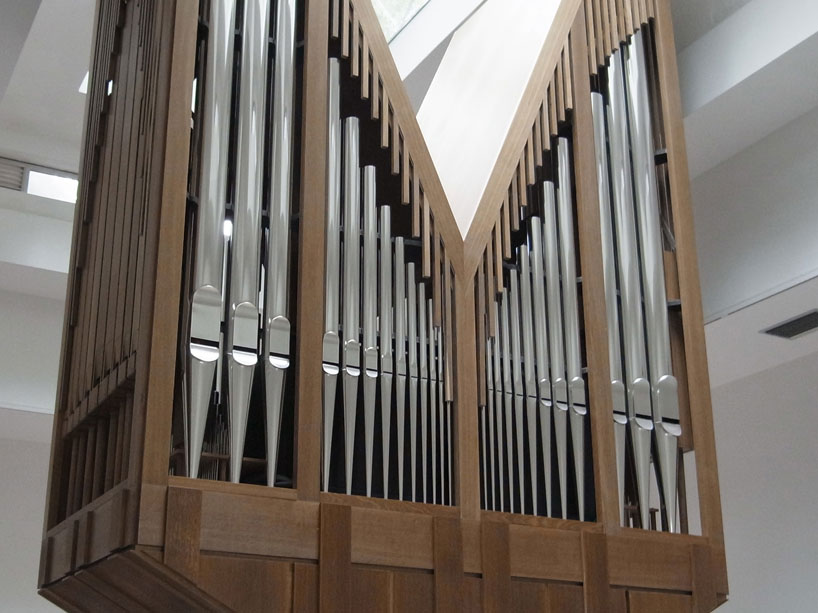 detail of organ, which was shipped from bonn, germany for the work image © designboom 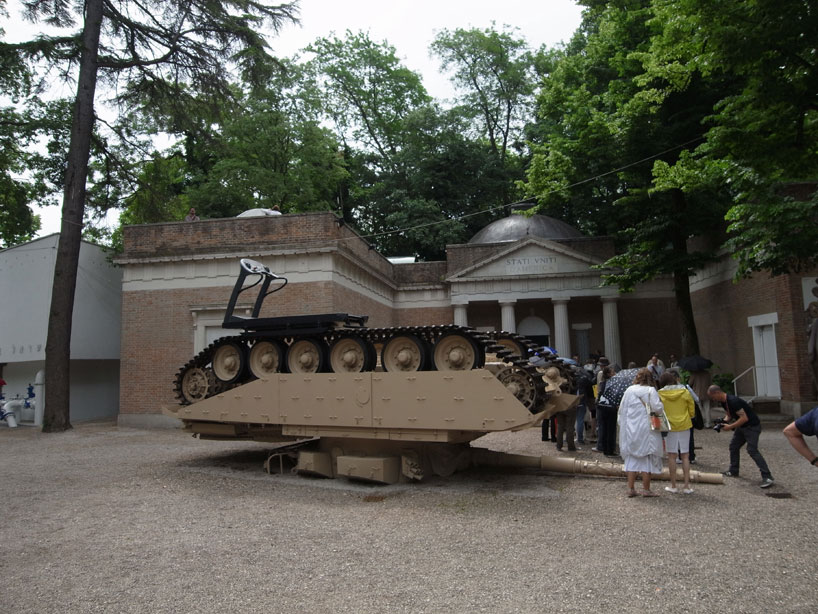 installed outside the US pavilion entrance, ‘track and field’ features a 60-ton military tank shipped from manchester, england, and converts it into a recreational exercise machine by superimposing a treadmill above its right track. olympic gold medalist dan o’brien runs on the treadmill at regularly scheduled intervals, with other athletes from the US track & field team running on it throughout the exhibition.

a performance of ‘track and field’ 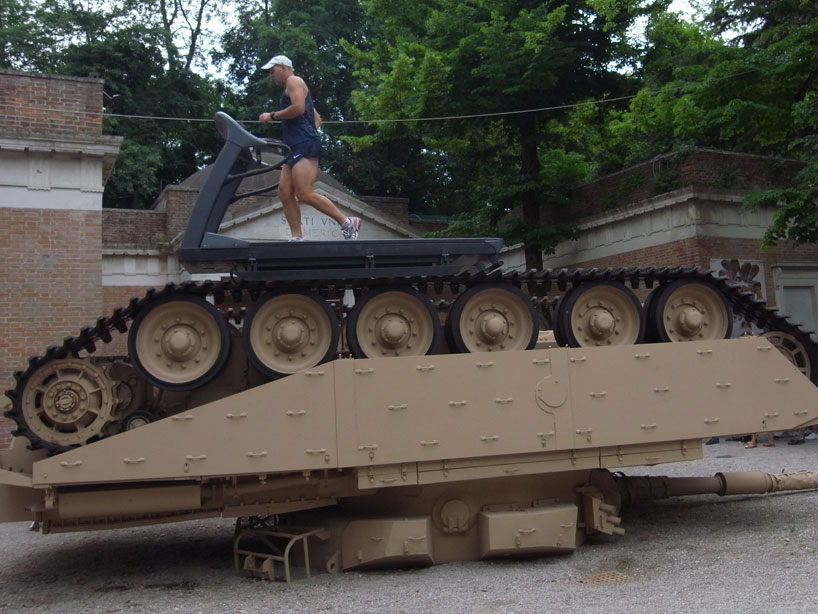 another performance of ‘track and field’ image © designboom 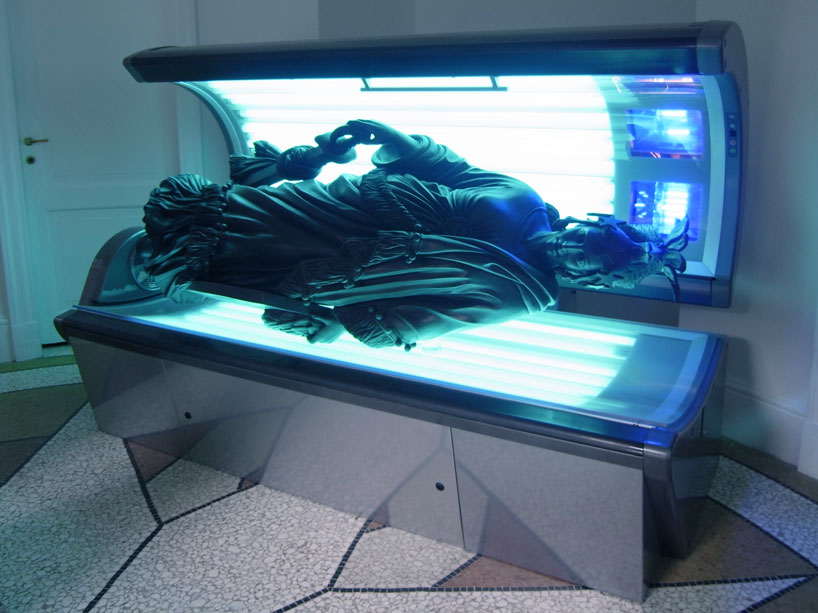 ‘armed freedom lying on a sunbed’ replicates the statue of freedom, which crowns the dome of the US capitol building. cast in a foundry in berkeley, callifornia, the bronze replica is scaled down to 7.5 feet in order to fit horizontally inside a tanning bed. the work is housed within the pavilion’s rotunda, which echoes the architecture of the US building housing the original statue. 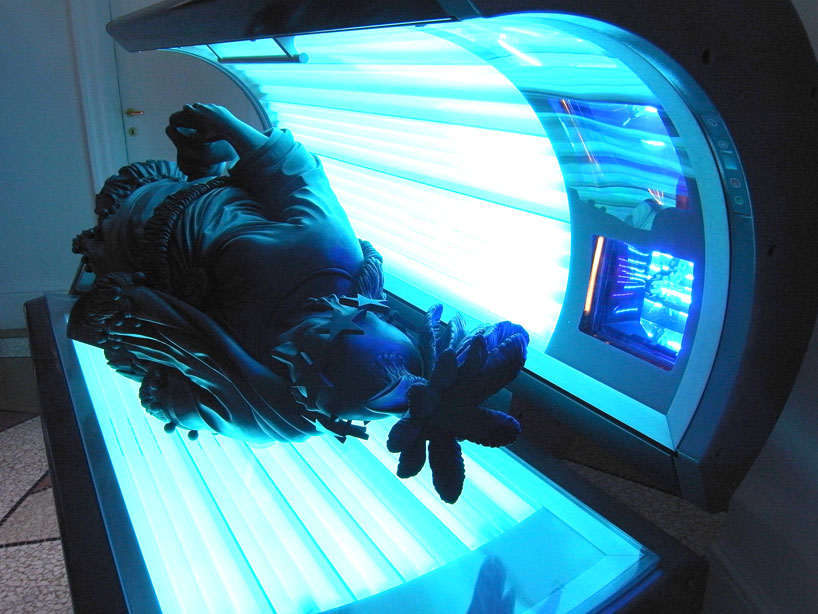 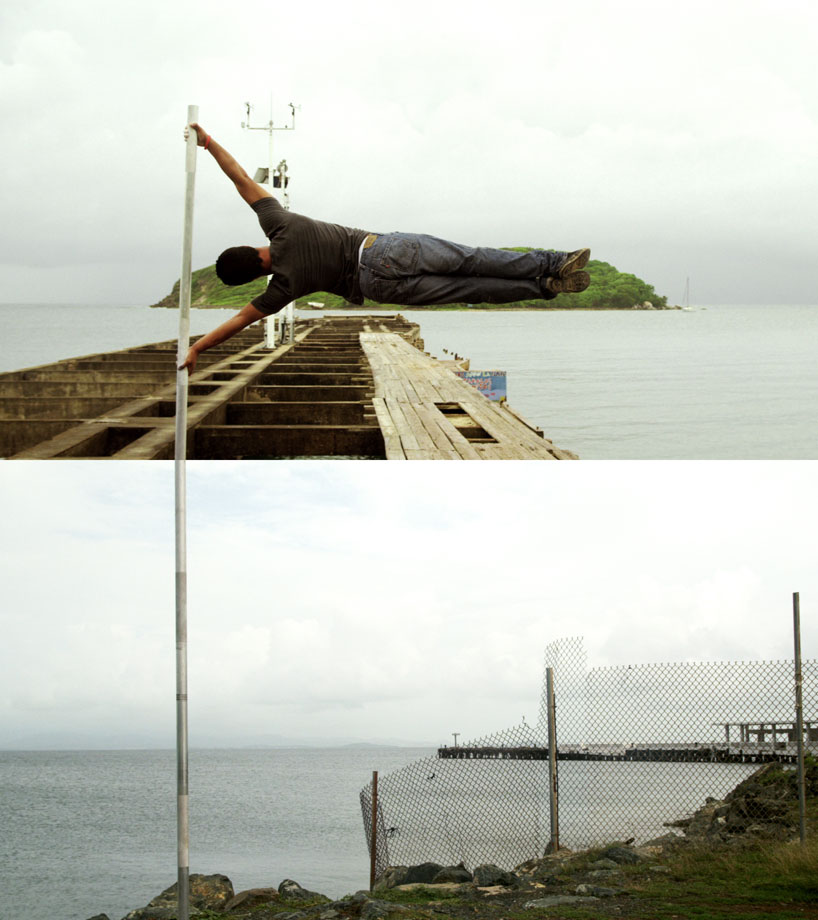 ‘half mast\full mast’ is a 21-minute video, the third in a series about the puerto rican island of vieques. controlled primarily by the US navy until 2003, the island has since begun environmental remediation: the work demonstrates the geography’s transition with two separate video channels projected simultaneously. both share a flagpole in the center of the image, joining the image’s disjunctive backgrounds and transforming gymnasts into flags, ‘flying’ at full mast or half mast in sites of victory and setback in the island’s history. 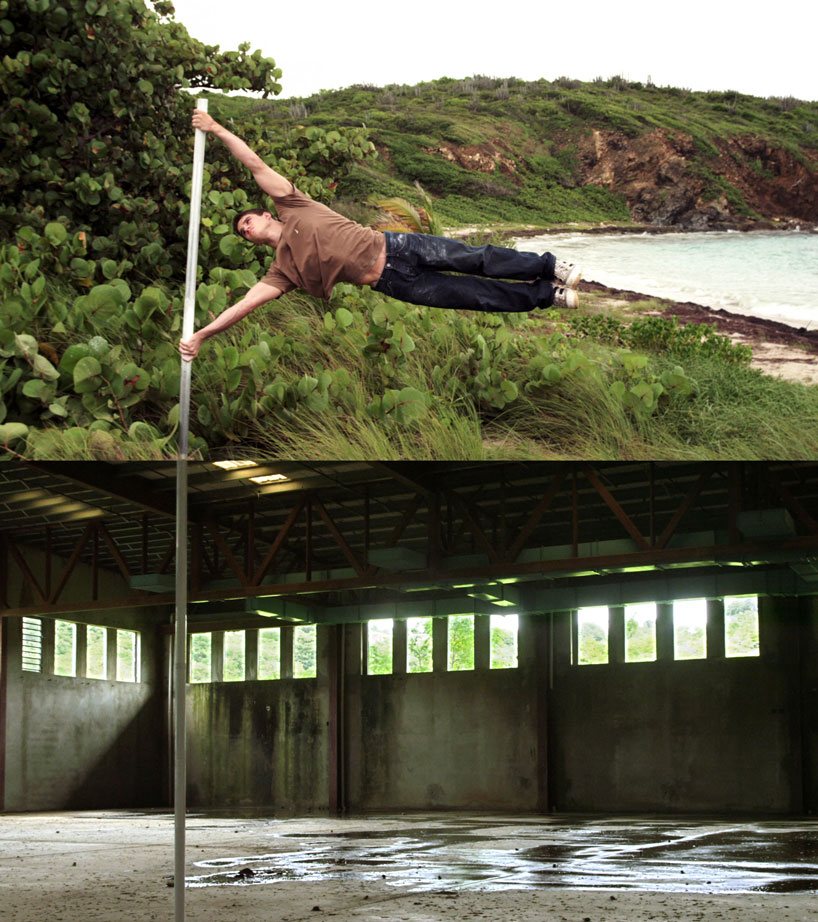