in 2004 the canadian artist adam brandejs created this ‘anamatronic flesh shoe’ in response to issues of sweatshop labour and content ownership. what looks like real skin is actually latex other materials used include steel, gear motors, printed circuit, rio MP3 player, batteries, staples and his friends hair. the shoe’s toe and heel raise and lower as it occasionally vibrates/pulsates, and twitches as if it were still alive.

other than simply being twisted, this piece comments on issues of sweatshop labour and content ownership. each piece of skin is therefore different in colour, size, and texture and the nike logo is done in white, slapped overtop of all the other colours. really, either you’re going to get it or you’re not.while your 10 year old son or daughter whines about not having the coolest shoes for school, another 10 year old on the other side of the world will never need worry about such issues as they won’t get to go to school, they make shoes for 3 cents a day instead. thus, the shoe represents the lives put into it. 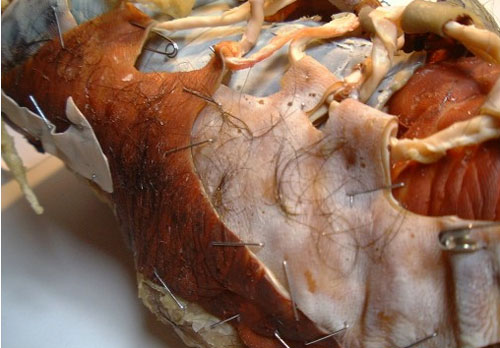 people like to ignore the reality of the issue, or come up with simple solutions such as ‘we’re giving – them- work’ thanks, I’m sure the world would fall apart without such generosity. and I’m sure before sweatshops the world crumbled.

If the flesh disturbs you, then the reality behind the issue would disturb you far more if we opened our eyes long enough to see it. we live in a culture disconnected from what it is doing to itself and others, we choose to ignore rather than deal with the reality we have created for ourselves. this piece ultimately comments on this simple idea’.adam brandej: http://www.brandejs.ca — via neatorama