the new campus features two new monumental commissions, one of which has been created by indian-born UK-based artist, anish kapoor. entitled ‘turning the world upside down, jerusalem’, the large hourglass-shaped object is located on the ida crown plaza, at the top of the carter promenade just before the upper entrance to the museum’s main building. built out of highly polished stainless steel, it stands at a height of 5.0 meters, with a 5.0 meter diameter. 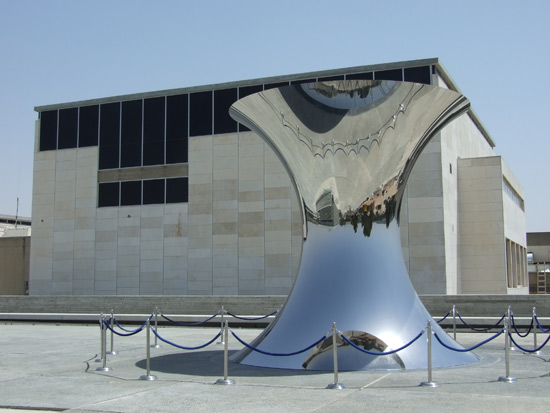 the sculpture is located on the museum’s crown plaza, the highest point of the renewed campus image courtesy of the israel museum

the curved form captures in its reflections, the earth and sky, but because of the shape, these are reversed: the top half reflects the ground (the visitors on the plaza), while the lower half reflects the skyline as it is seen around the perimeter of the museum campus. visually, the reversed reflections of the two halves create a contrast of color and subject matter. the reversal of sky and earth also relates to the spiritual importance of jerusalem as seen in the concepts of earthly and celestial / heavenly jerusalem. 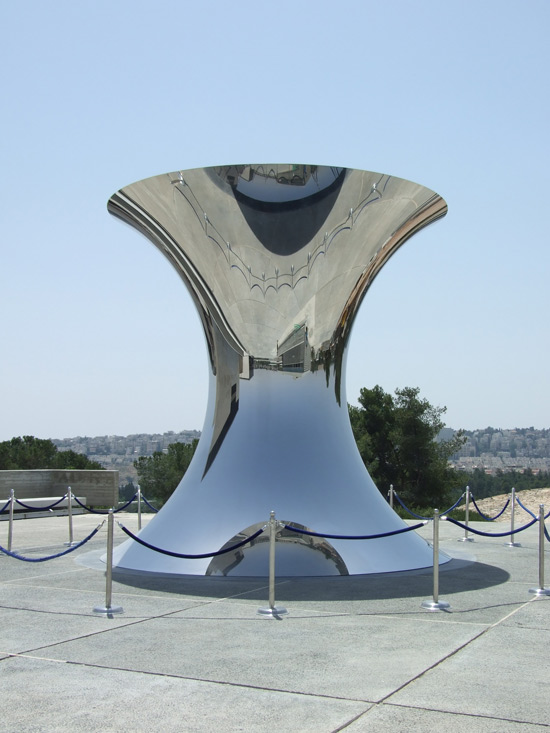 the object stands at 5.0 m x 5.0 m image courtesy of the israel museum

anish kapoor’s ‘turning the world upside down, jerusalem’ is a gift of charles bronfman, new york; richard goldman, san francisco; and lily safra, monaco, with additional support from the barbara and eugene schwartz contemporary art aquisition endowment fund, in memory of the israel museum’s founder and father, teddy kollk, and in tribute to his vision for the museum.

anish kapoor was born in 1954 in bombay (mumbai), india. he has lived and worked in london since the early 1970s when he moved there to study art. his work has been exhibited internationally at such institutions as the tate gallery and hayward gallery, london; reina sofia, madrid; haus der kunst, münich; deutsche guggenheim, berlin. he represented britain in the XLIV venice biennale in 1990, when he was awarded the premio duemila prize, and received the turner prize the following year.