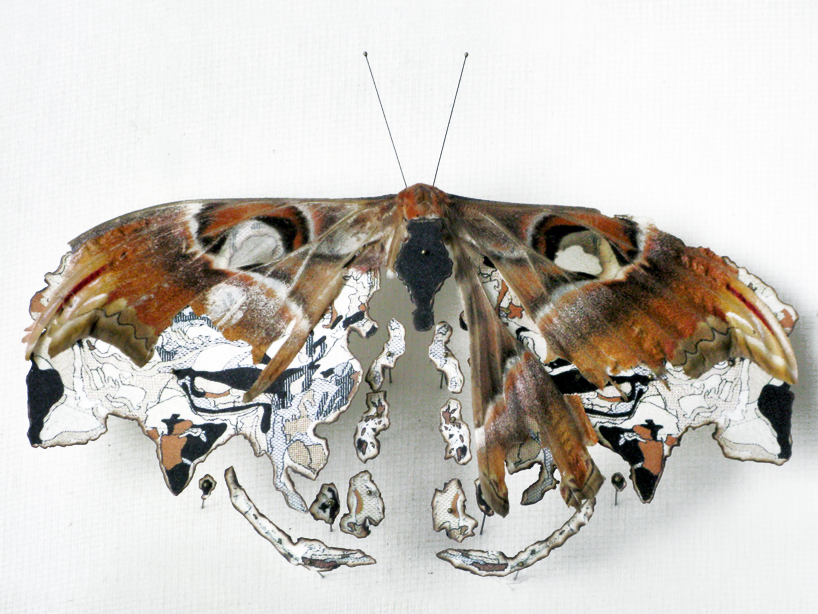 influenced by children’s book ‘the butterfly workshop’ by gioconda belli, where a boy dreams of one day creating a cross between a bird and a flower,
netherlands-based artist anne ten donkelaar has taken this imaginative concept and created ‘broken butterflies’, a series of hybrid insects.
the collection features damaged specimens which are repaired based on their existing condition through detailed pieces of textile,
elements found in nature and mechanical gadgetry.

the original name of the ‘map butterfly’ is the atlas moth which currently lives in asia. building on the theme of travel and location
the artist used cartograms to repair its wings extending its life. the topography lines are rendered in the same color tone as the insect
outlining a new form and identity for the fragmented animal. 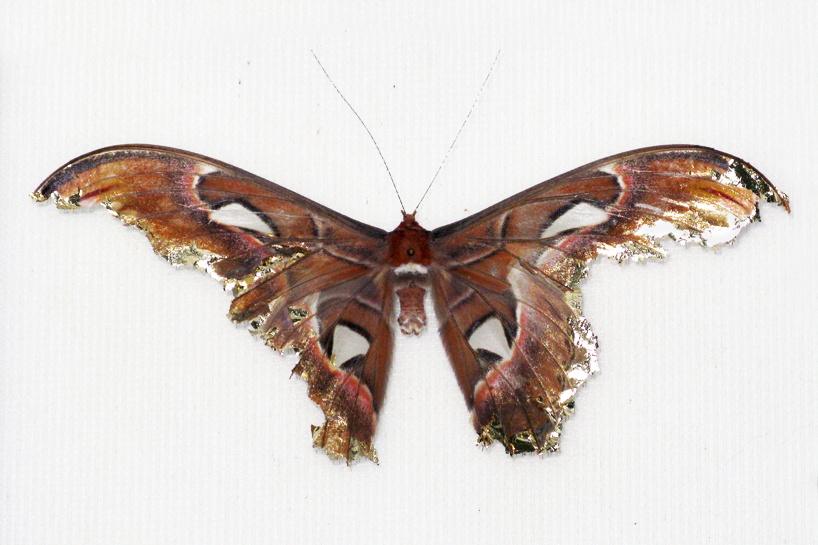 the wings of ‘gold fray’ seem to be worn out, like a garment which has its seam missing and the fabric edges are rubbed through.
from this detail the artist has fixed the extensions with lustrous leaf to stop any further unraveling of the ends.
the glided surface has now created a precious object in shinning flight. 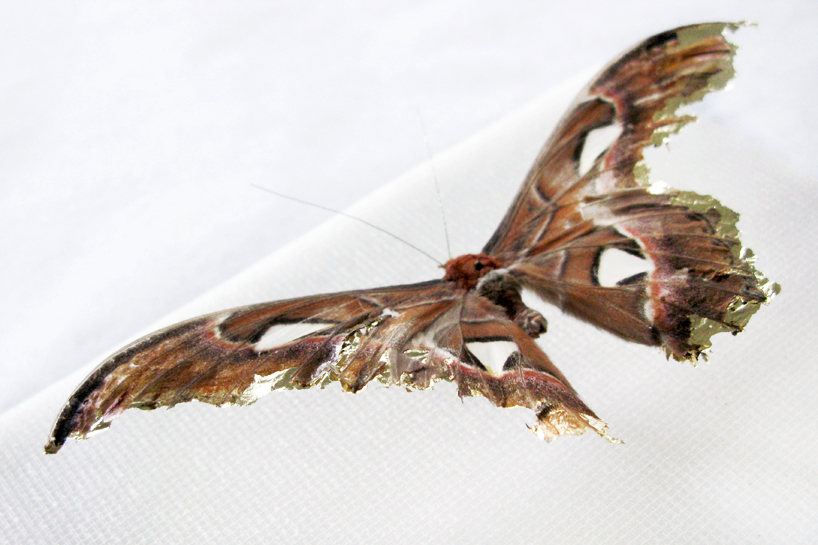 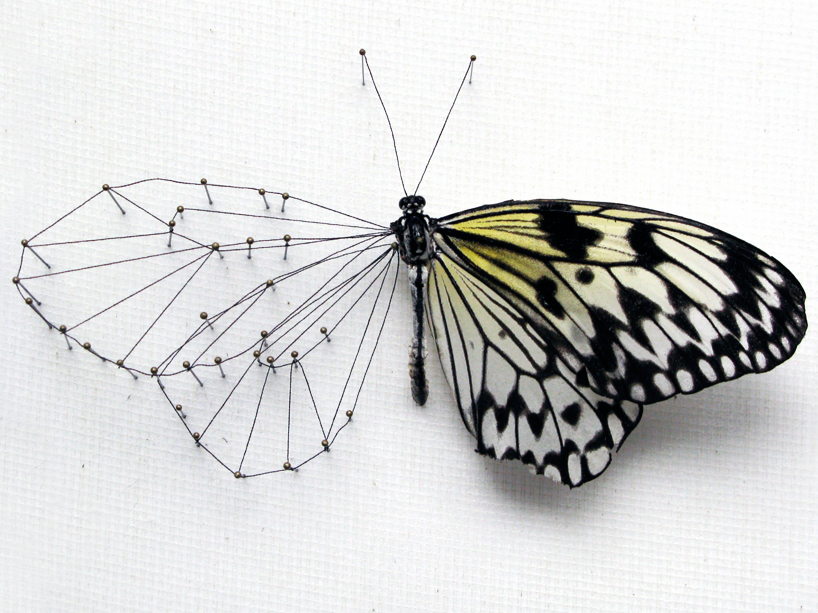 since ‘the treadtensioner’ was missing two of its wings, anne ten donkelaar began a restoration of the insect using thread and pins.
the silhouette of the other half has been carefully constructed to outline the veins of the arm. the delicate structure resembles
museum displays which exhibit the collected characters. 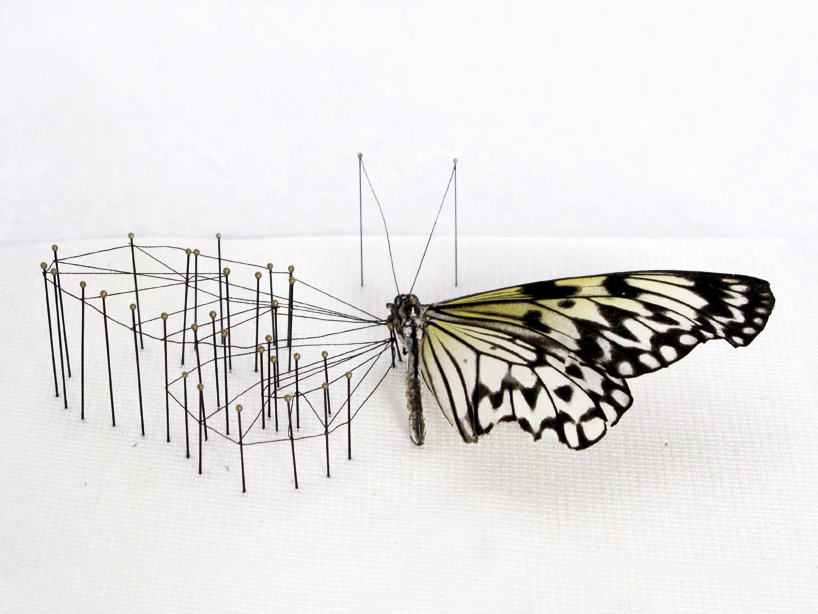 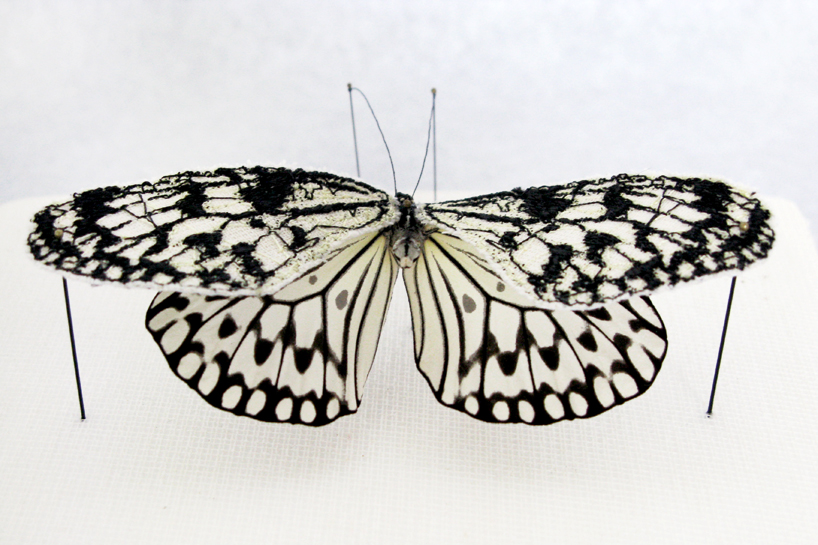 an embroidered black and white textile provides this spotted butterfly with new upper wings which were originally missing from its disk.
the stitched pattern creates a textured dimension on the insect producing mimicking attribute which is often associated with this insect. 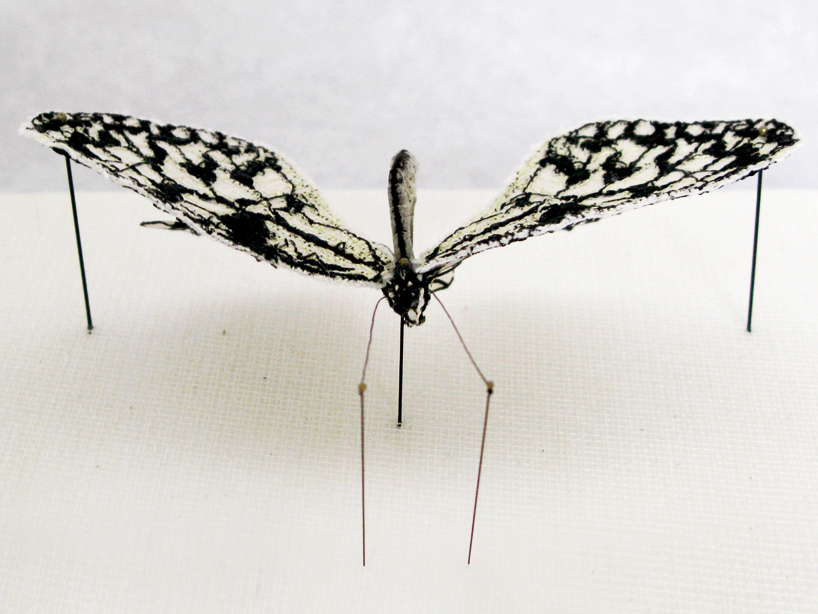 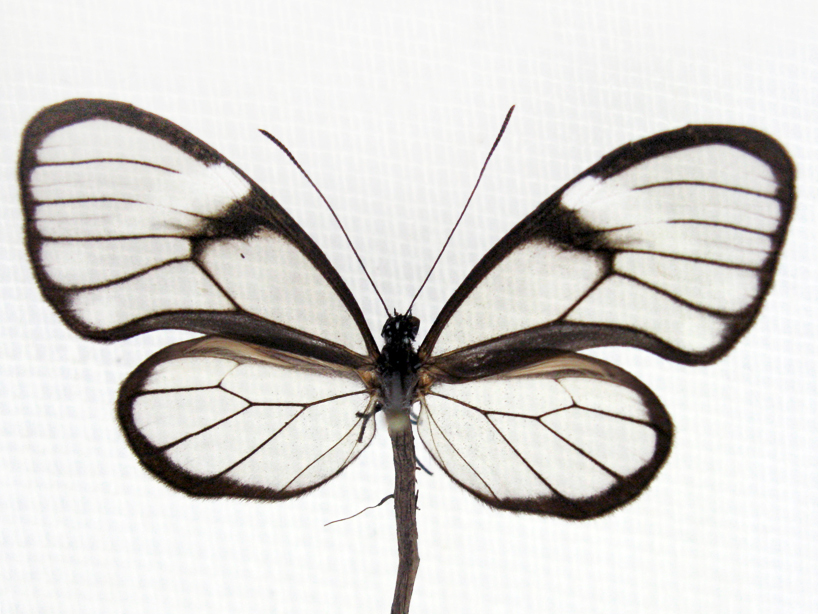 the ‘golden root butterfly’ was missing its body and instead of adding a synthetic element to the reconstruction the root of a plant was attached
to the insect’s torso. the organic appendage which stretches down the frame symbolizes an umbilical cord to the earth.
it indicates the importance of nature and how it must be cherished and maintained to flourish in the future. 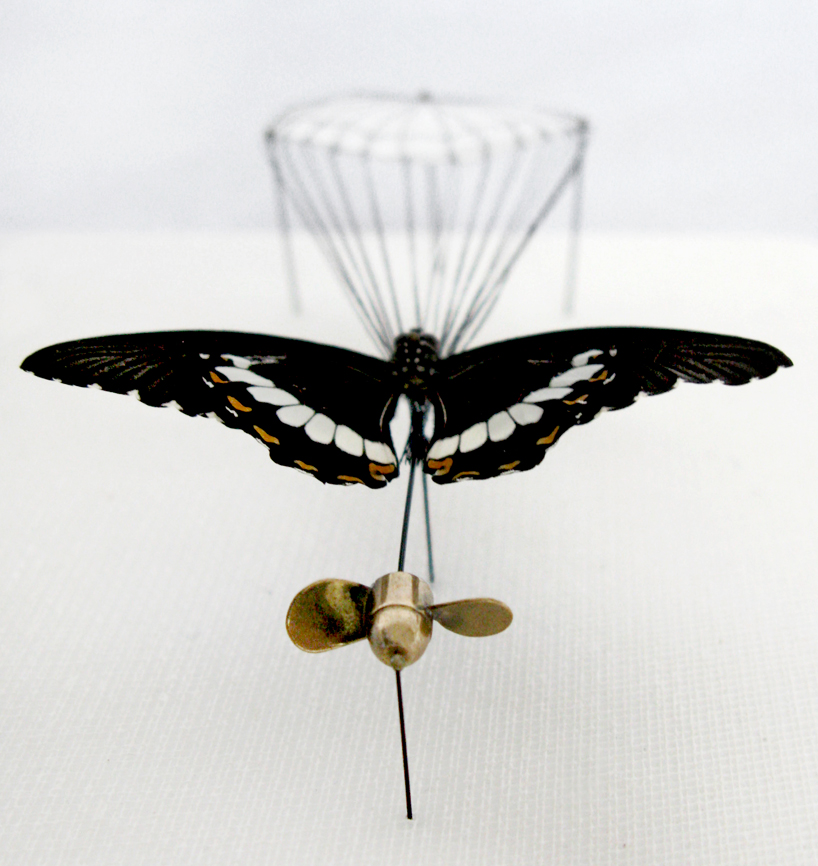 having lost her body and antennae, this butterfly could no longer fly. to remedy her condition, she was given a new set of gliding tools as well as a propeller.
based on the idea of movement ‘medusozoa’ is a now a hybrid insect with airplane qualities. it showcases the marriage of nature and machine
through the construction of this industrialized object. 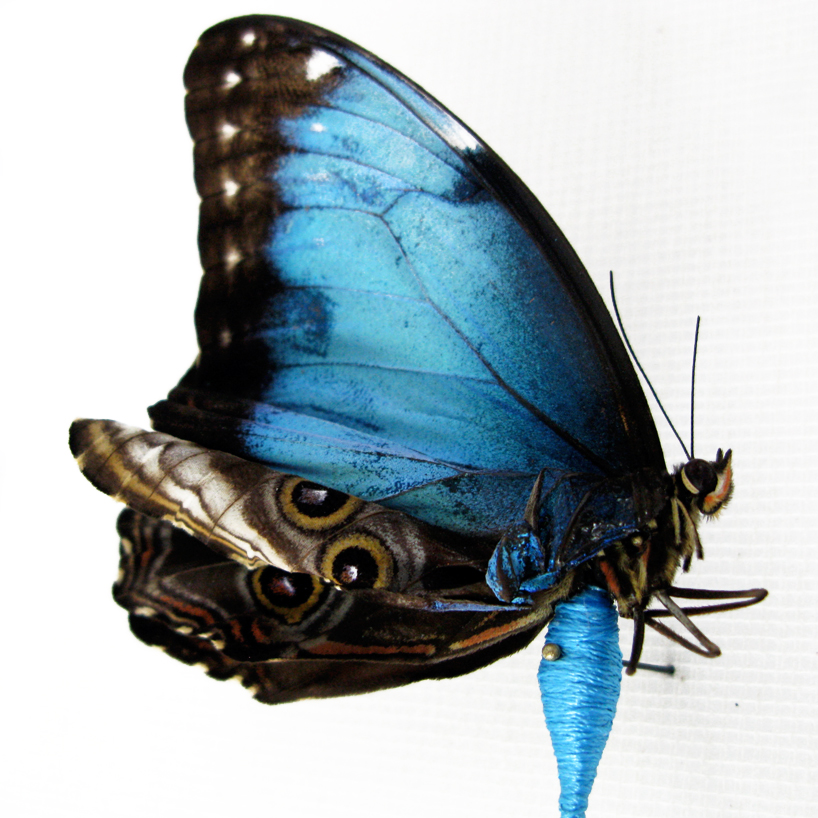 having looked like it died the moment it hatched from the cocoon, the body of ‘blue spinner’ has been recreated from a twig wrapped with blue thread.
a few of the pieces hang loose showing the butterfly slowly unwinding and breaking free from its cocoon. 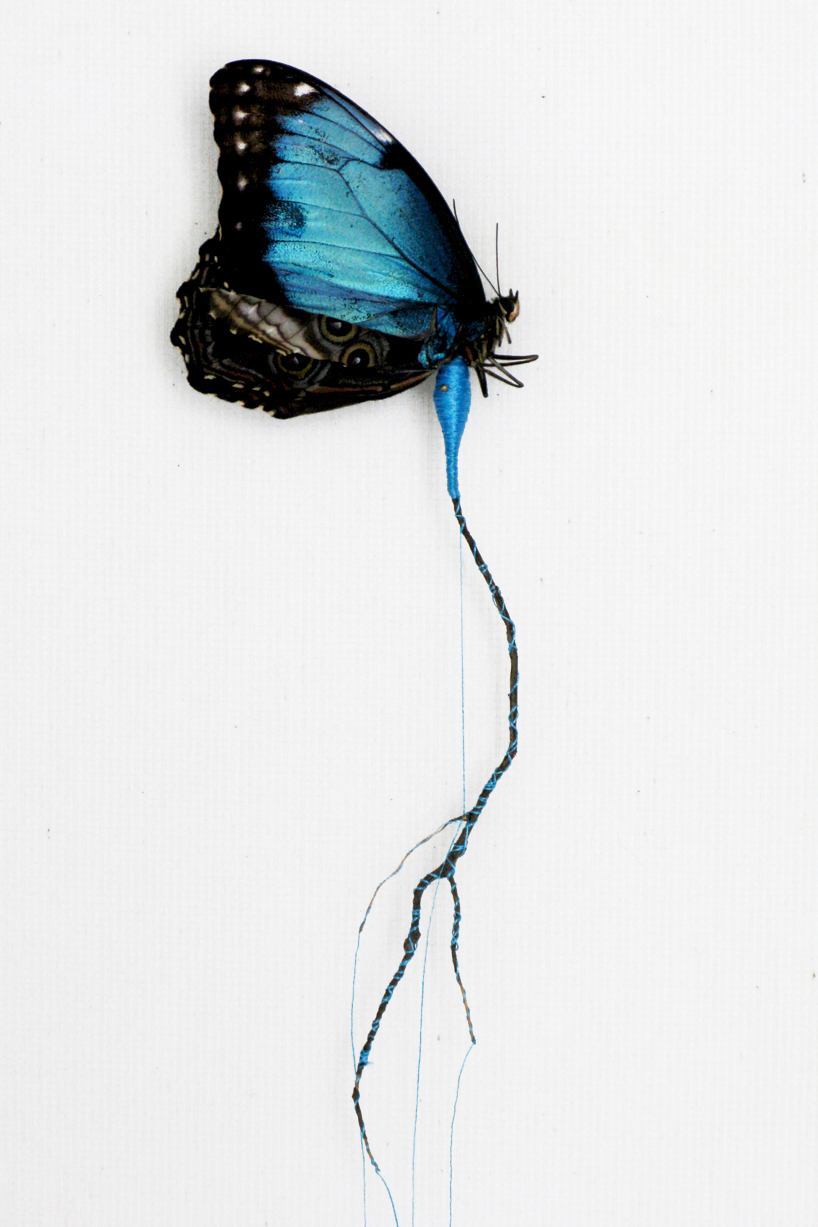 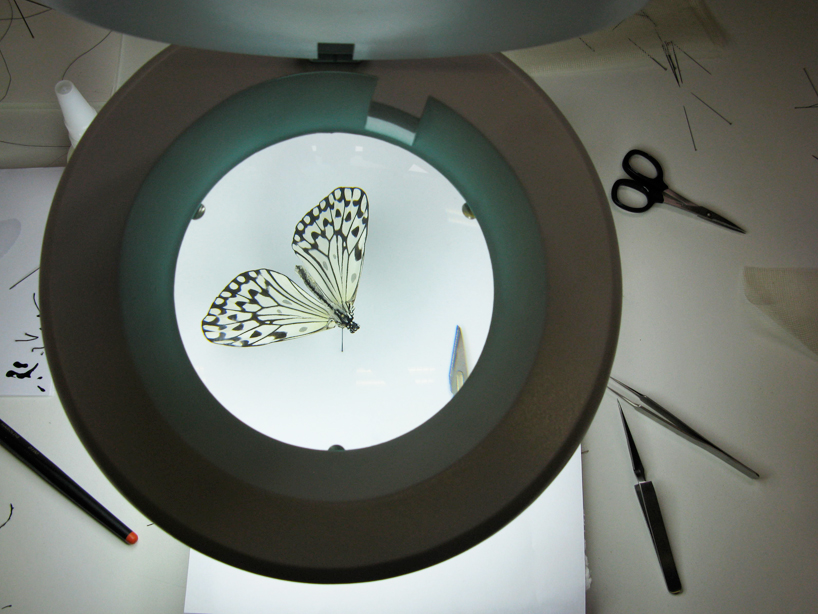 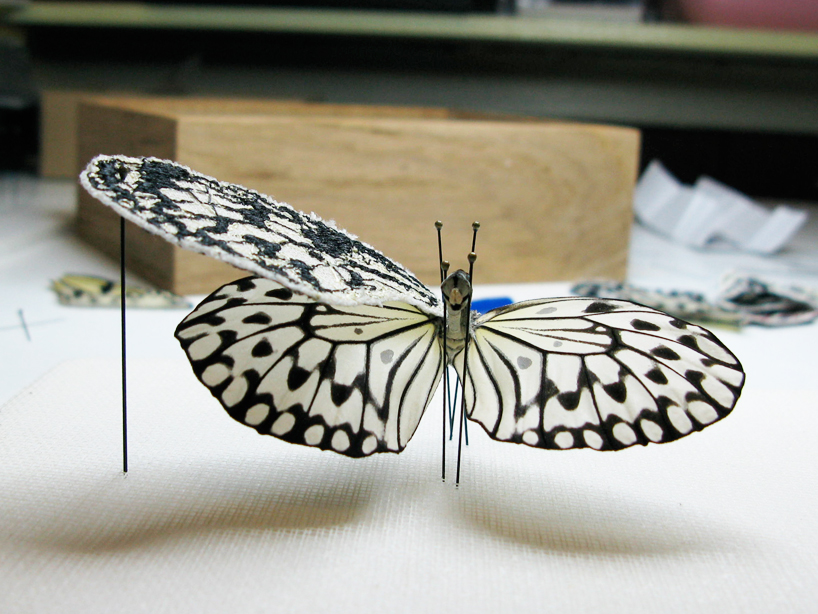 wings are delicately attached to the body of the butterfly 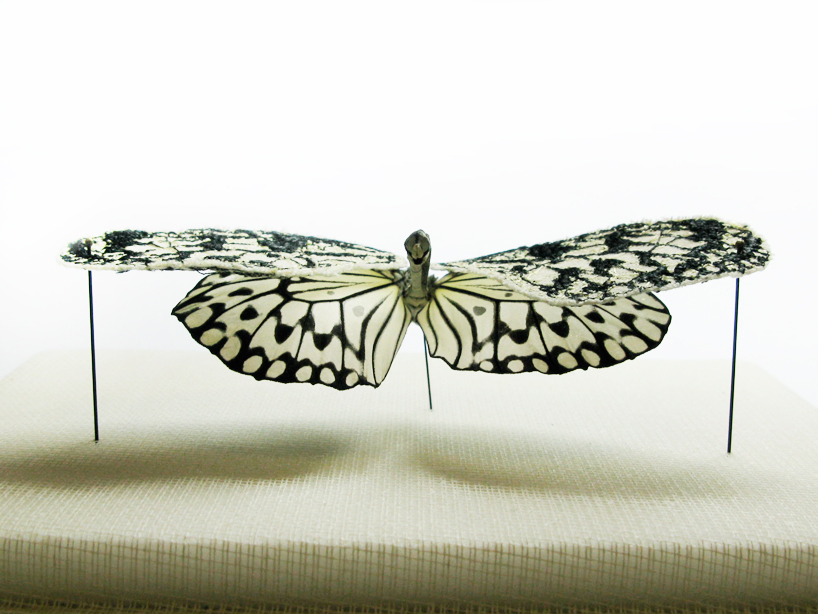 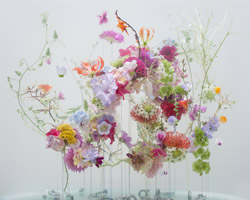 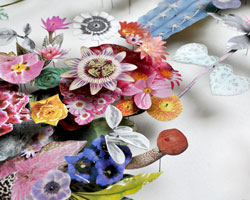