a lost interview with a young man claiming to be the grafitti artist banksy has been discovered in an ITV vault. the interview was shortly filmed before the elusive street artist’s breakthrough exhibition ‘turf war’ in london and shows a man whose face is covered by a baseball cap and a t-shirt pulled over his face. 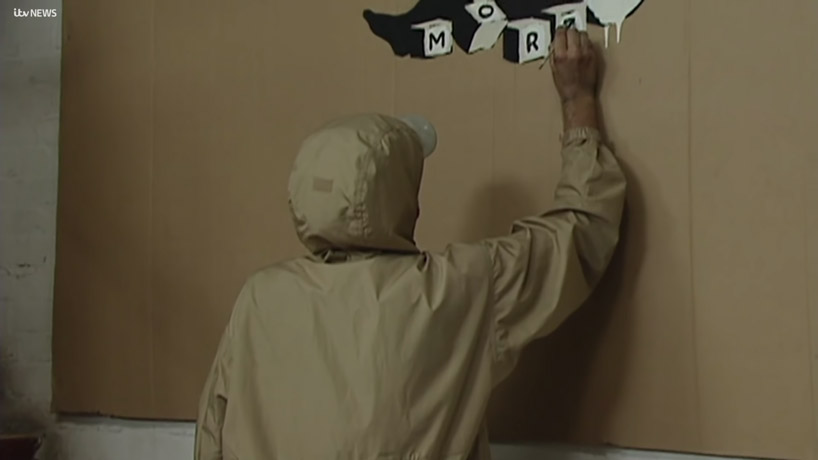 the clip was unearthed by bristol-based ITV reporter robert murphy who found it while researching banksy. ‘he was relaxed, he was laid-back, he was amiable. I quite took to him,’ gordon recalled. ‘I was dreading a pretentious arty-farty type, but he was very pleasant.’

‘I’m disguised because you can’t really be a graffiti writer and then go public,’ the anonymous artist, who is supposedly banksy, tells murphy in the video. ‘the two things don’t quite go together.’

. I made a customised stab-proof vest and thought – who could possibly wear this? Stormzy at Glastonbury.

on his work, the interviewee added: ‘it’s hard to make an entertaining picture at the best of times, but at least if you have something that wanders around and licks its nose and urinates in front of you, it’s going to make the picture a bit more interesting.’

this isn’t the first time reports have supposedly revealed the identity of banksy. another video interview that purportedly featured the artist surfaced in december 2016.

regardless of banksy’s real name, the artist’s politically charged work continues to make headlines. he recently designed a stab-proof body vest for british rapper stormzy, which the grime star wore during his headline performance at glastonbury festival last weekend.