in the north of são paulo, the favela of vila brâsilandia has been given a multicolor metamorphosis by art/design collective boa mistura. as part of the ongoing project ‘luz nas vielas’ — first initiated back in 2012 — the urban works seek to empower neighborhoods and connect residents through strategically scattered paintings across alleys in brazil. when viewed from a specific angle and distance, the anamorphic paintings have spelled out words that describe the daily life of the residents, like beauty, pride, strength, and love. now, boa mistura returns to the favela to add two more written works to the landscape. 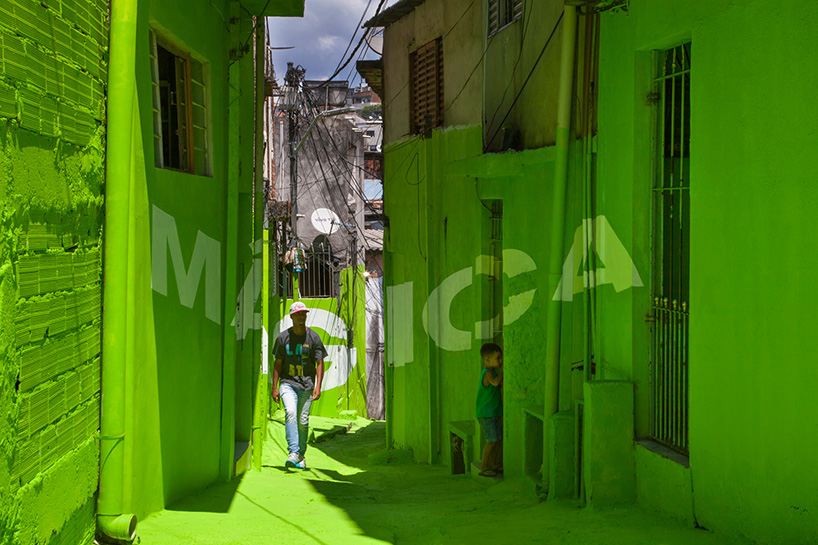 the project seeks to synthesize the essence of the brâsilandia neighborhood

boa mistura has painted ‘poesía’ and ‘magica’ in purple and green respectively, speaking to the magic of the area’s spontaneous urban growth, and the intensity of the relationships between neighbors. the project intends to simplify the spacial complexity of the favela’s narrow alleyways using the technique of anamorphosis to generate a single canvas across the buildings. the collaborative process sees residents and artists as one, taking over the walls and the floor — an event that brings the entire community together under one color field. 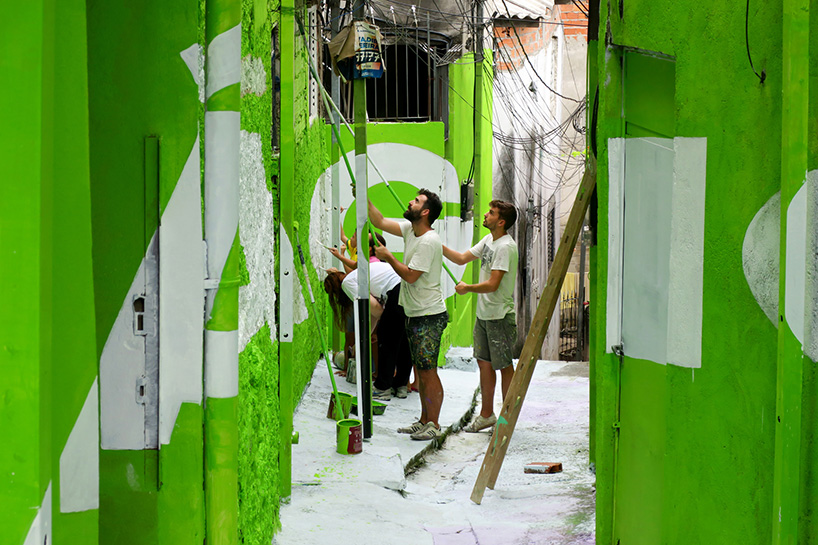 ‘it is in these streets where you get to feel the true life of the hood,’ the team describe, ‘where it truly makes sense to include people, to create change. this project aims to be a colorful shout in the middle of a brick ocean, in which life is on the edge. usually municipal authorities turn their back on the outskirts, which we often get to know because of the infamy from the media. we as urban artists have to reverse that process of negativity, because the favela does not have to be a synonym with violence, because life in this place is more intense and real, because: there is no purest and most sincere poetry, than the one that comes from the favela’. 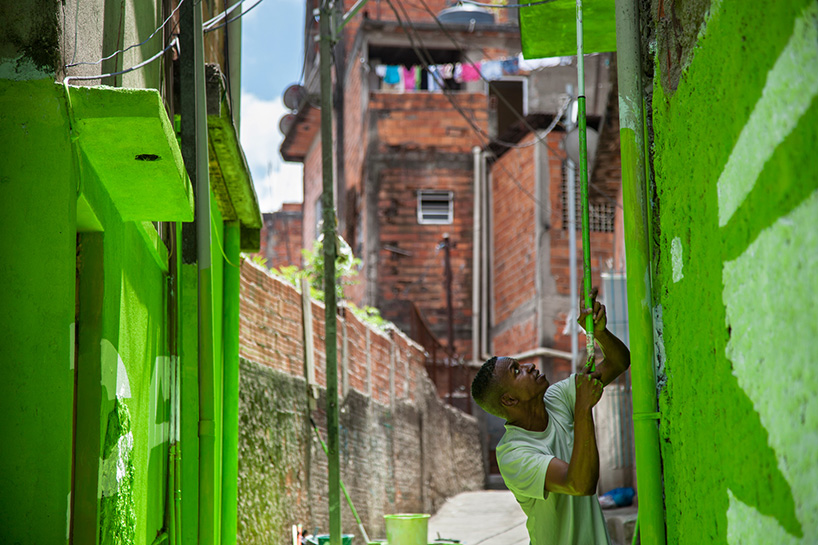 the word ‘magica’ has been painted on a vibrant green backdrop 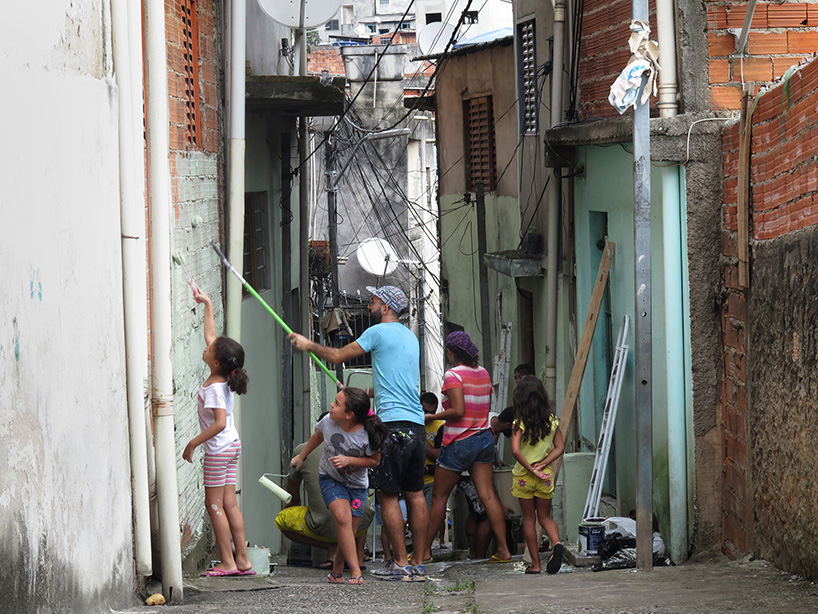 the collaborative process sees residents and artists come together 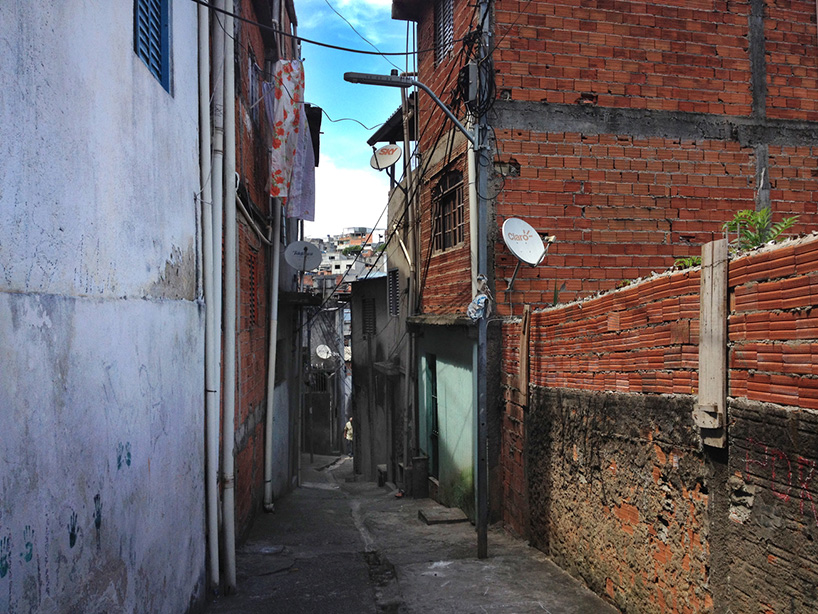 the alleyway prior to the urban intervention by boa mistura 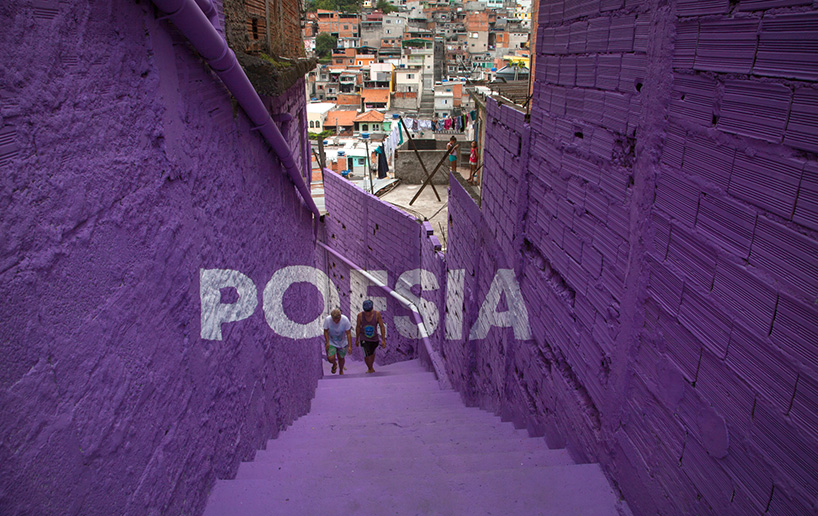 bright purple walls form the backdrop for the word ‘poesia’ 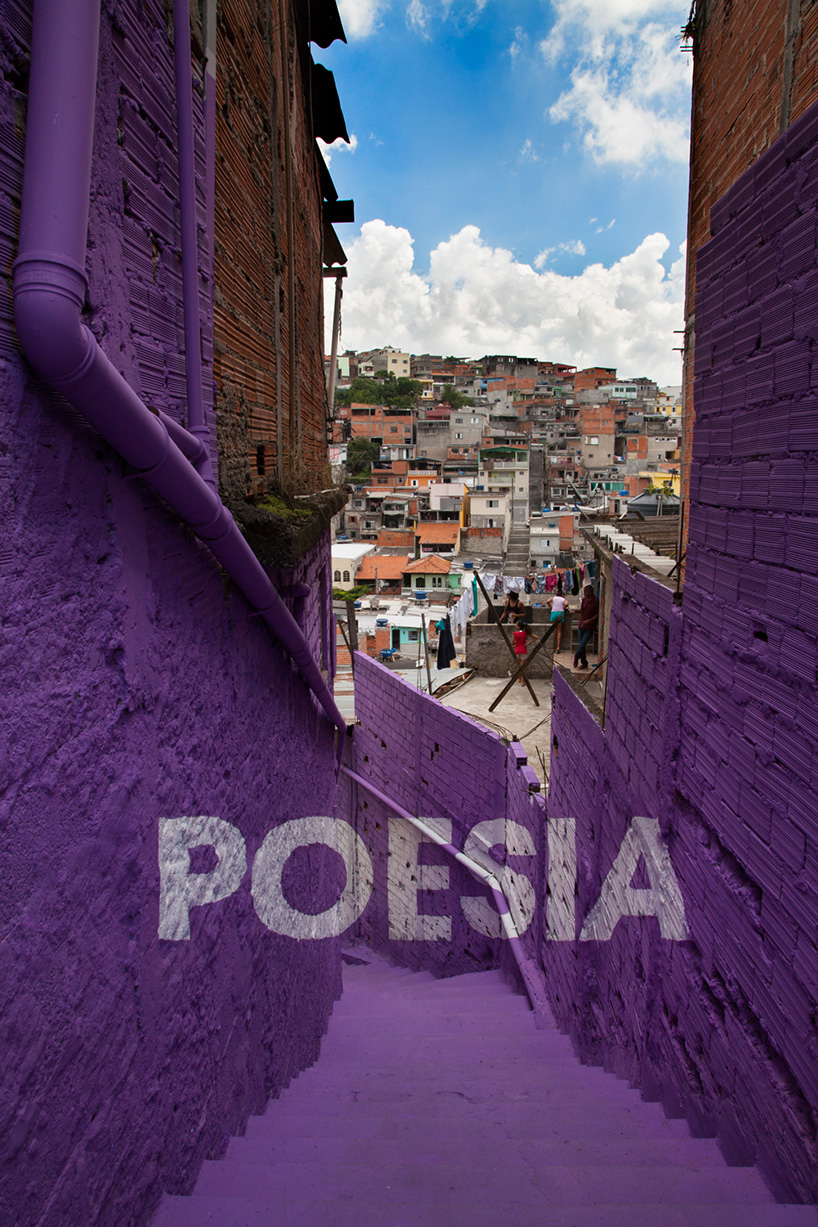 the installation speaks to the intensity of the relationships between neighbors 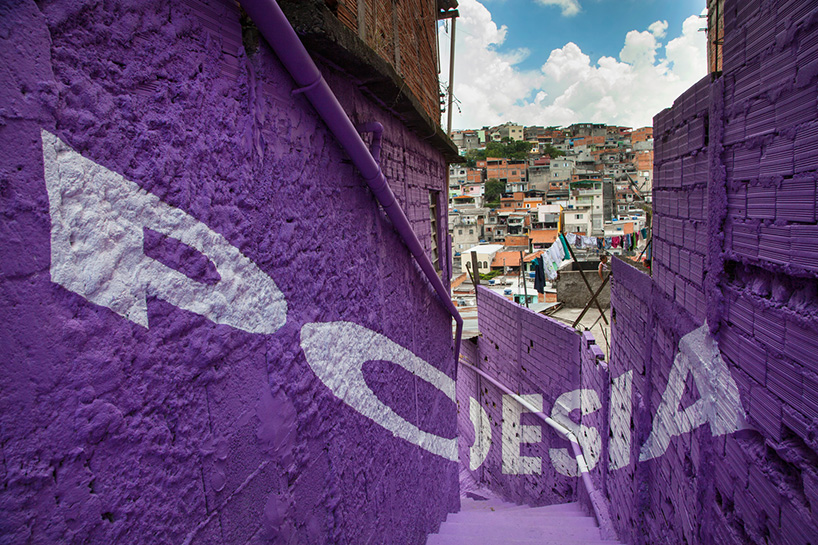 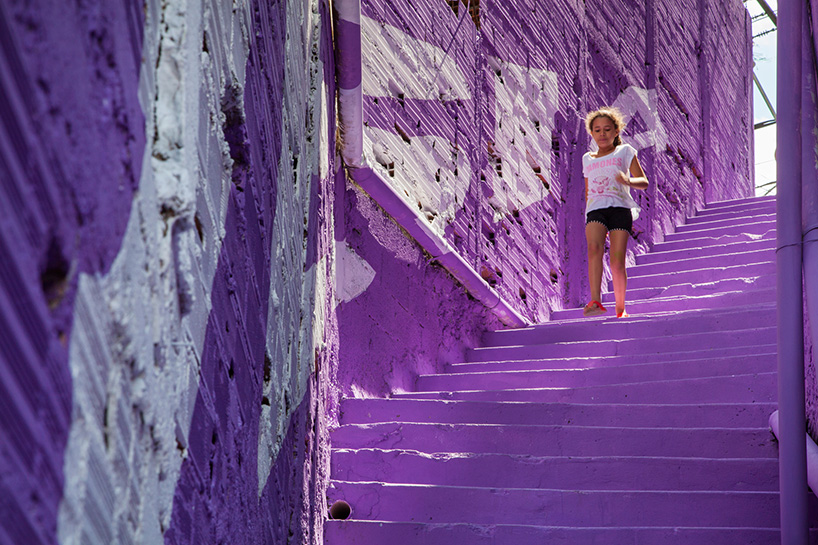 the technique of anamorphosis generates a single canvas across the buildings 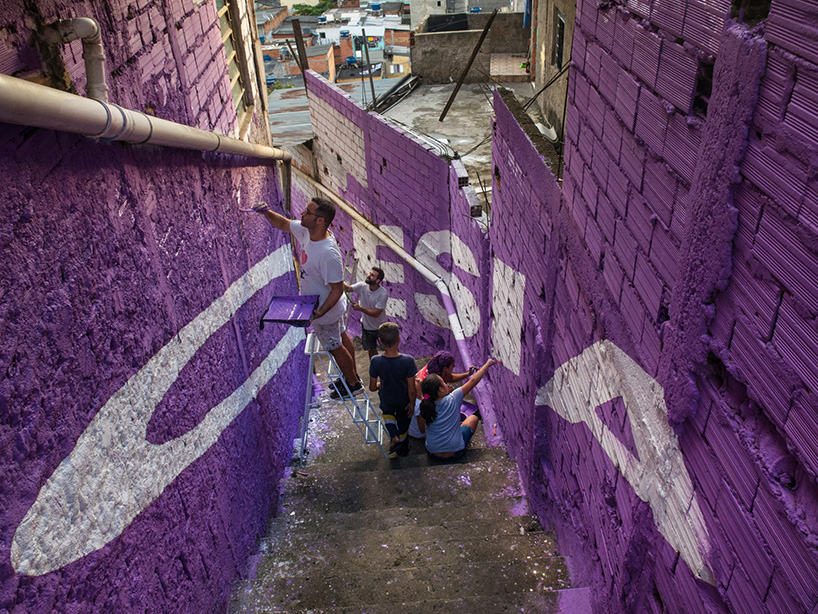 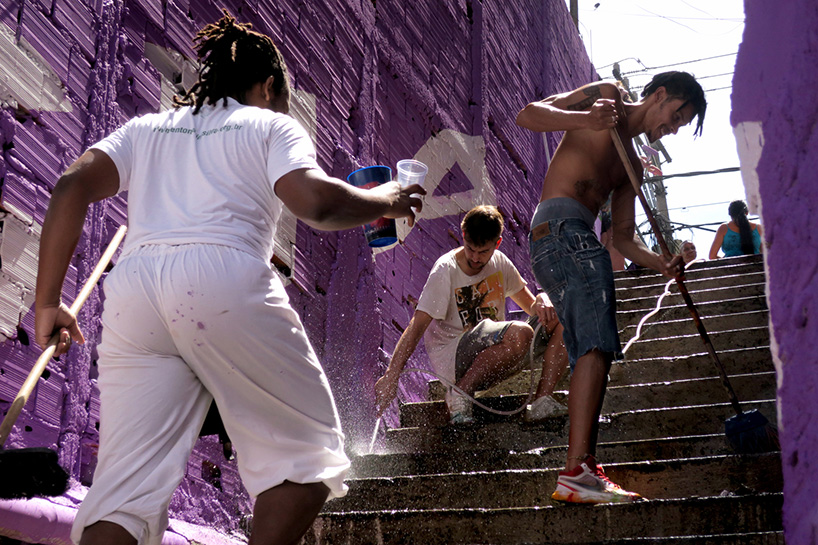 the event brings the entire neighborhood together under one color field 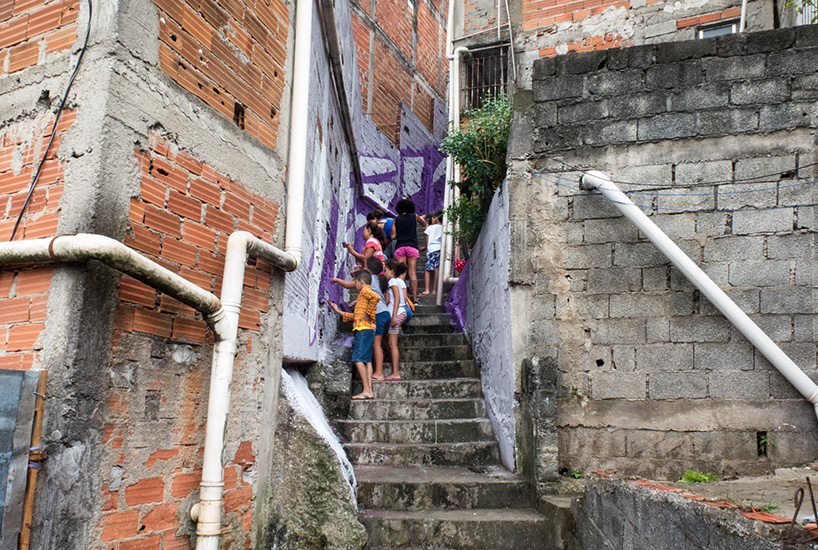 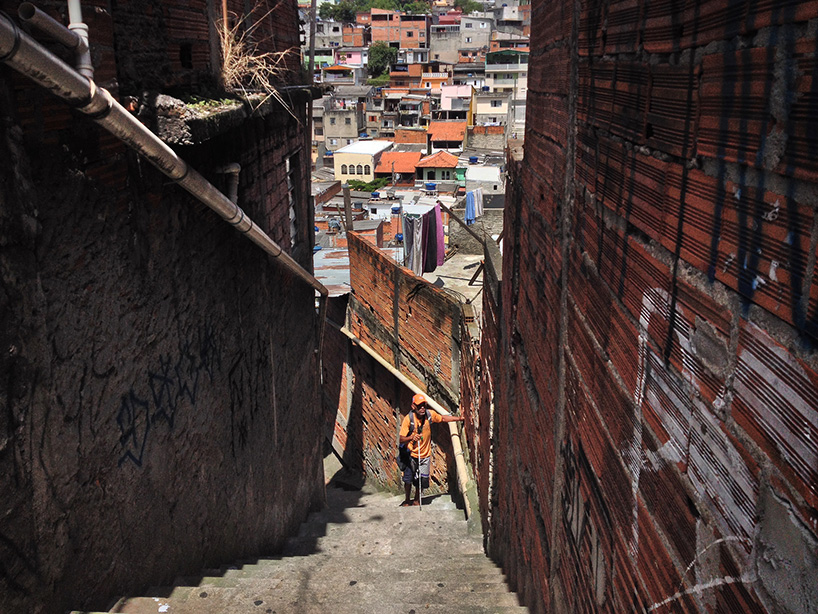 the alley before the painted installation took place 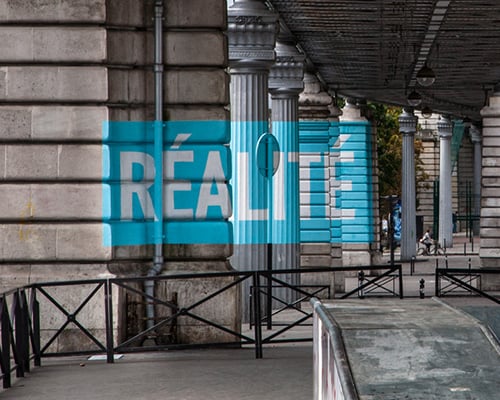