during the middle ages, popular public spaces belonging to all members of a society were coined ‘the commons’ and gave citizens a place to strengthen the identity of their community. these sites all but disappeared around the 18th century under the pressures of population growth and private interest, eventually becoming a symbol of modernity crushing antiquity.

in the heart of the up-and-coming district of zürich west, the pfingstweid is what remains of an ancient common outside the city. part of its plot has been adapted for various temporary initiatives, such as urban gardening, playgrounds, art projects, and ever-changing creative content.

using the site as both a location and inspiration, the project ‘common ground’ — curated by silvia converso, michele d’ariano simionato and caterina steiner — seizes the chance of using the memory of a disappearing society as the catalyst for a future one. its aim is to change the perception of the pfingstweid and transform it into a lively area and meeting point for the whole neighborhood. 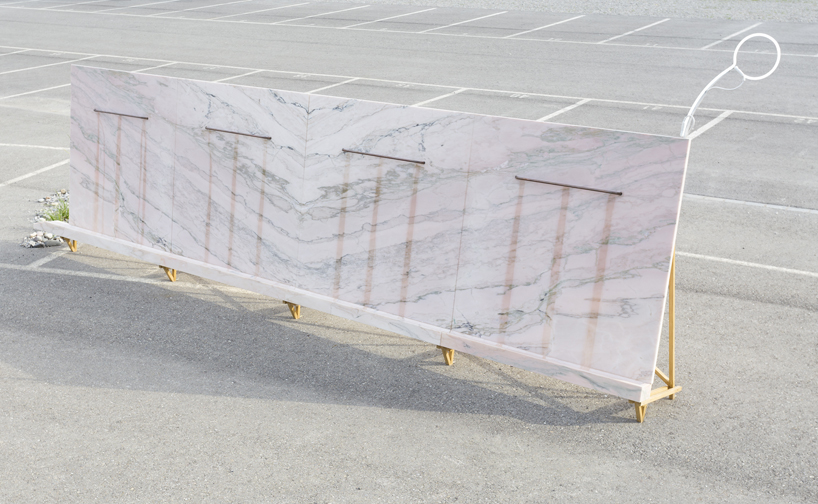 the exhibition ‘common ground’ takes place within a reused container, displaying contributions from different authors and theoreticians. surrounding the temporary gallery, three creative installations interpret the notion of ‘commons’, forming a dialogue with the area, neighborhood and its visitors.

for their contribution to the site, swiss studio bureau A has realized ‘fountain 2017’ — a 6-meter-long pissoir made of pink portuguese marble. the work provocatively adds to ‘common ground’ in order to remind us that public space needs to preserve its capacity to supporting debates and creative proposals of any kind, whether social, political or cultural. 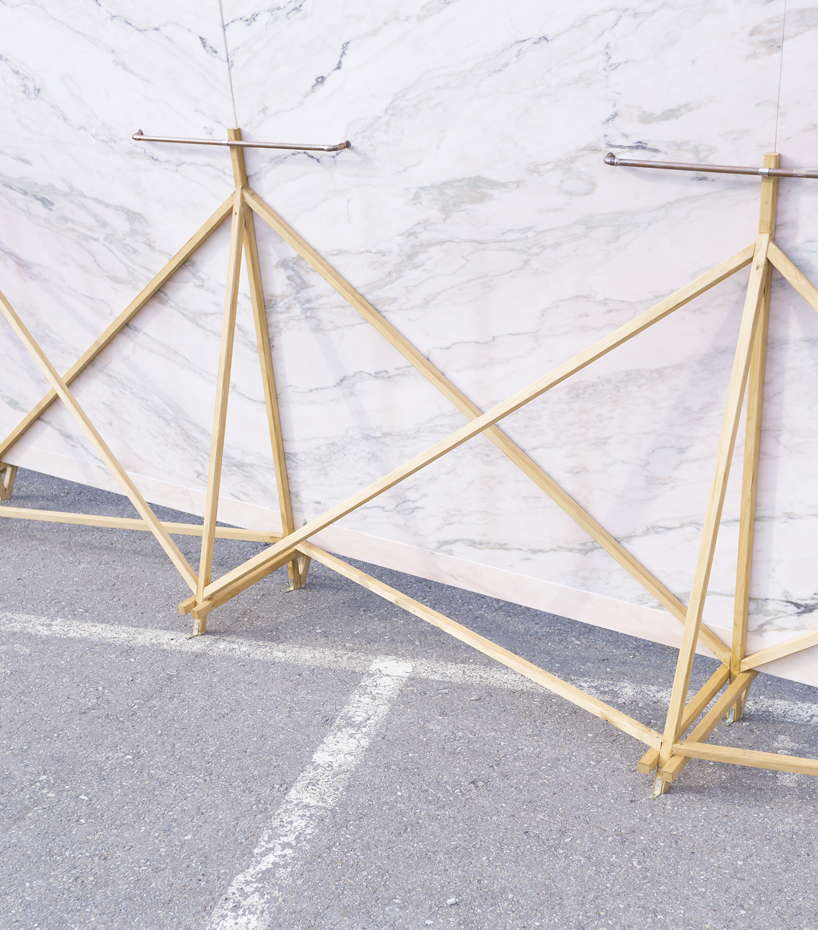 the work provocatively adds to the exhibition ‘common ground’

‘this fountain of youth, a symbol of birth and beauty cannot be filled with crystal water anymore. it is now filled with the dirt of europe’s recent history, where wealthy countries dictate the fate of not-so-wealthy ones,’ bureau A describes of the project.

‘europe is moving. fast. what we thought would be a community of identities has turned into a quite competitive space dominated by financial hierarchies. the ‘community’ follows aggressive financial trends that opposes the idea of a cultural neighbourhood where moral and ethical values are shared. the attack of countries by complex financial apparatuses as the hedge funds and the like has provoked a general disorder and a global feeling of distrust in the civic society. greece’s debt might be saved by crowd-funding initiatives, by large numbers of anonymous international citizens trying to overrule what governments do not seem to deal with anymore: people.’ 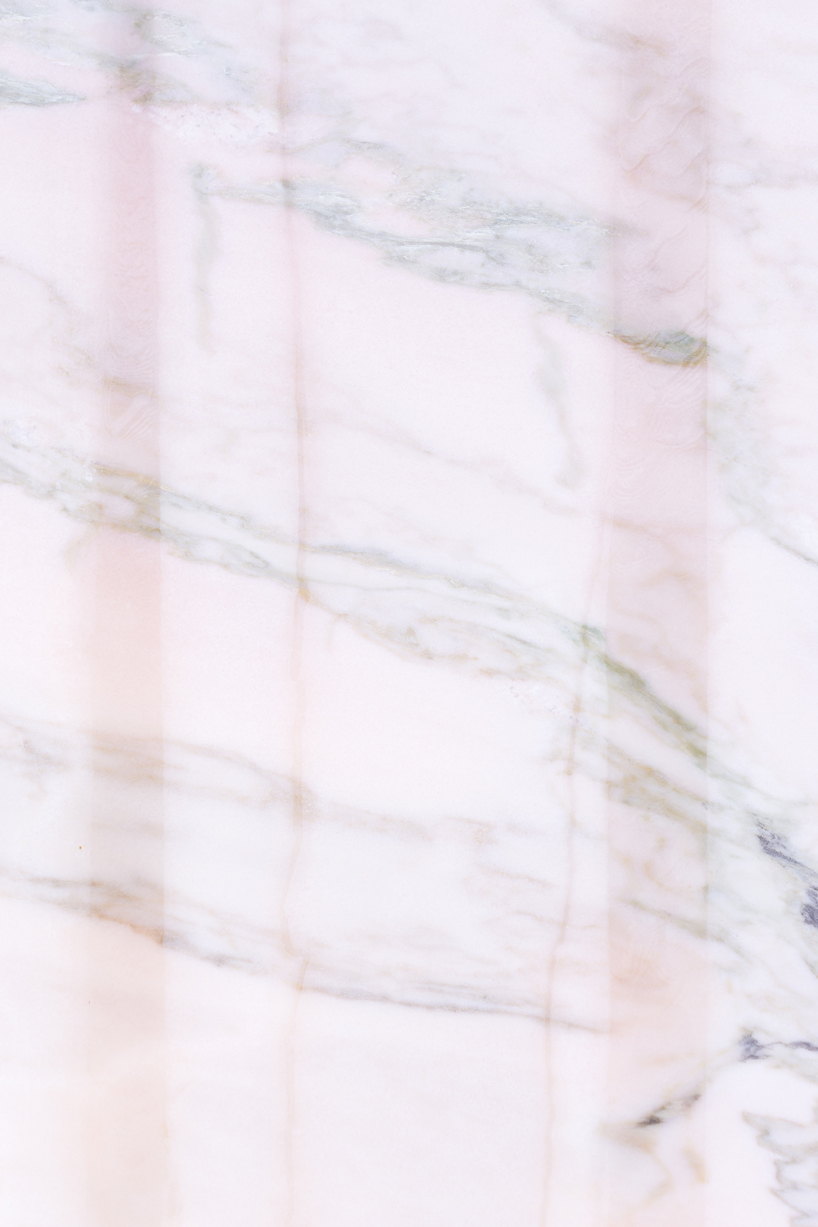 ‘so here’s a present, a cultural gift from one of these countries that is not doing that well to one of the rich companions of the community. in the form of a noble fountain, a classical figure of occidental culture, lisbon sends a solid salute to rich zurich. a contribution to its public spaces where people can meet, be revolted by whatever, play, drink, sleep, love. anything should be possible within a public space. as a slight provocation, celebrating another almost 100-year-old fountain, fountain 2017 sends some marble to zurich from lisbon, so we can all can piss on it.’ 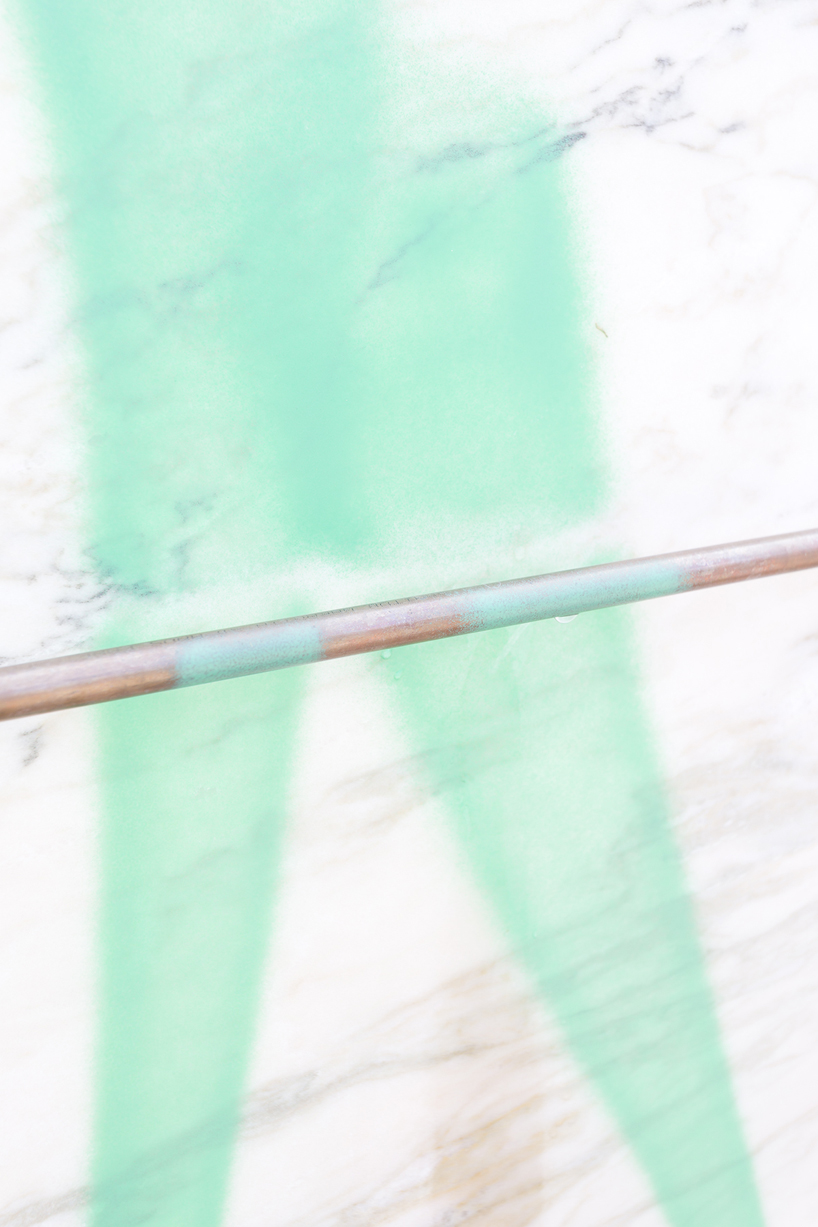 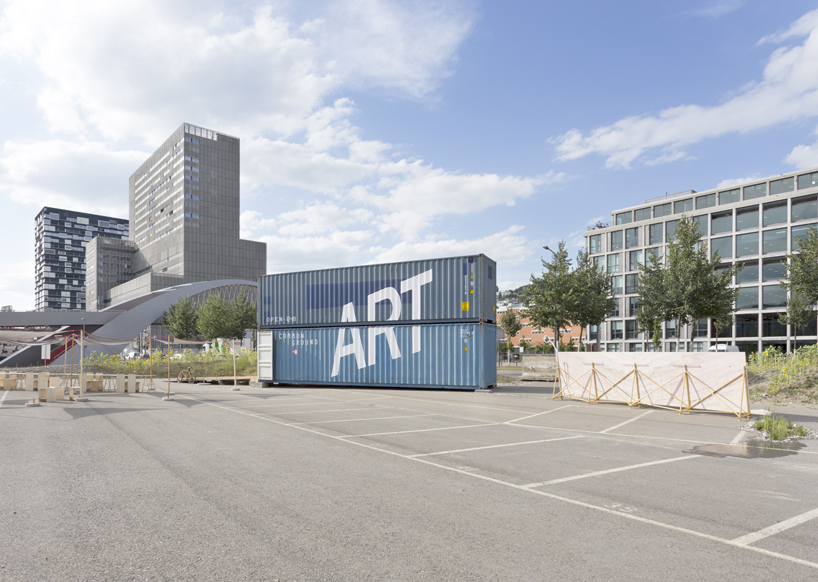 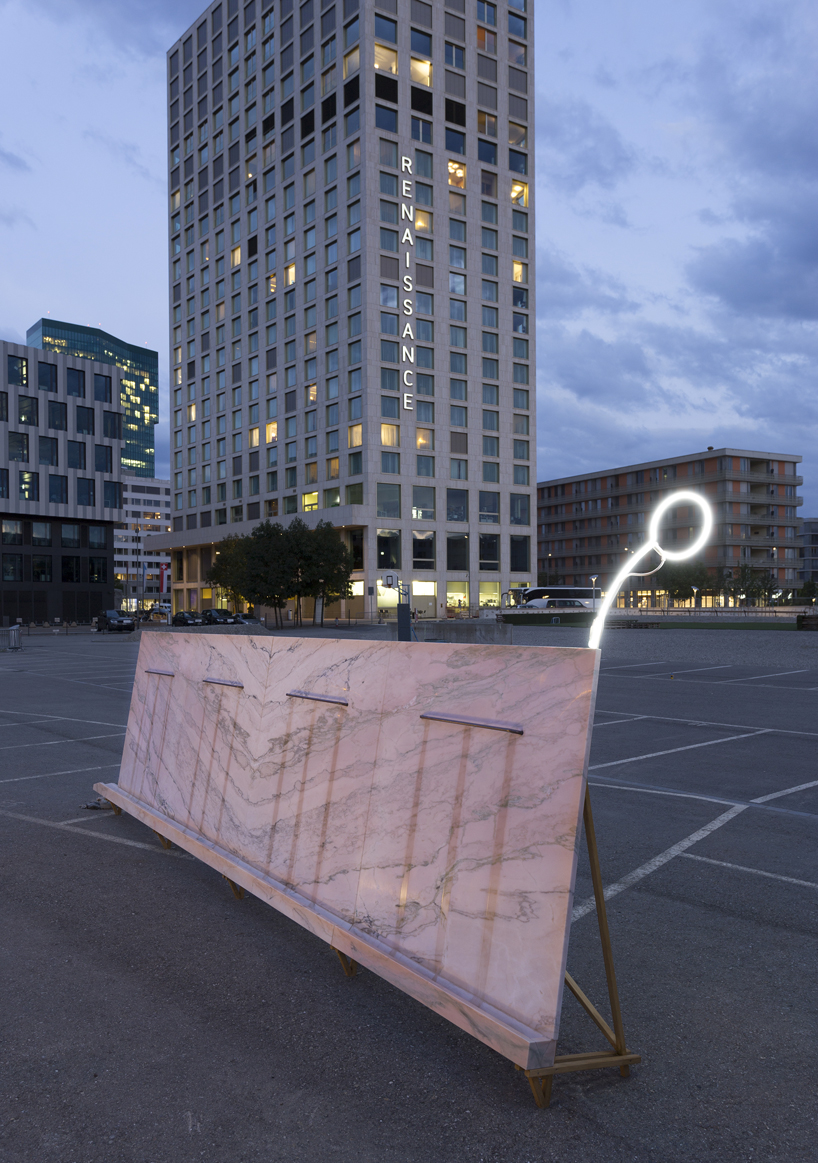 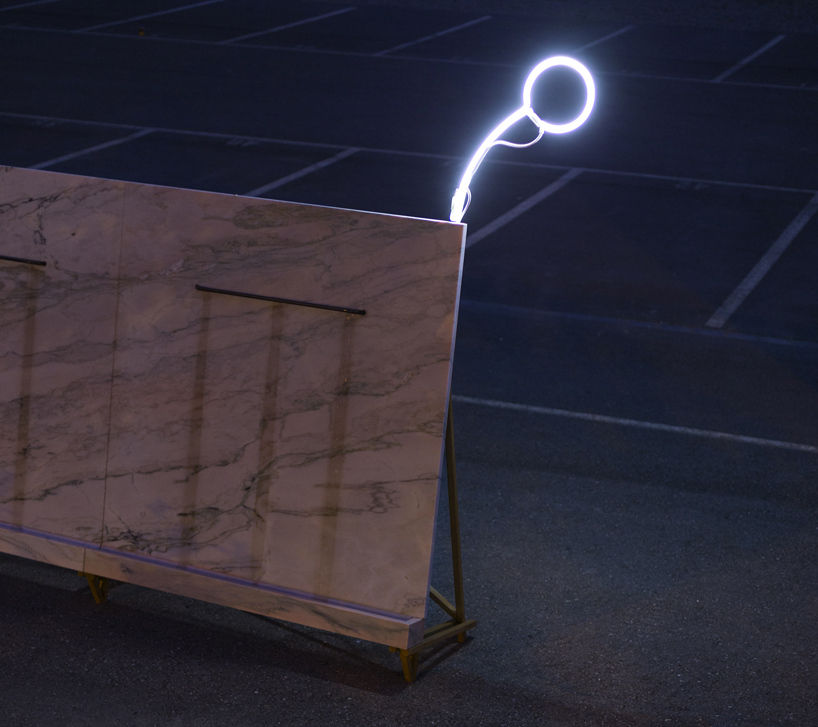 the sculptural pissoir illuminates at night 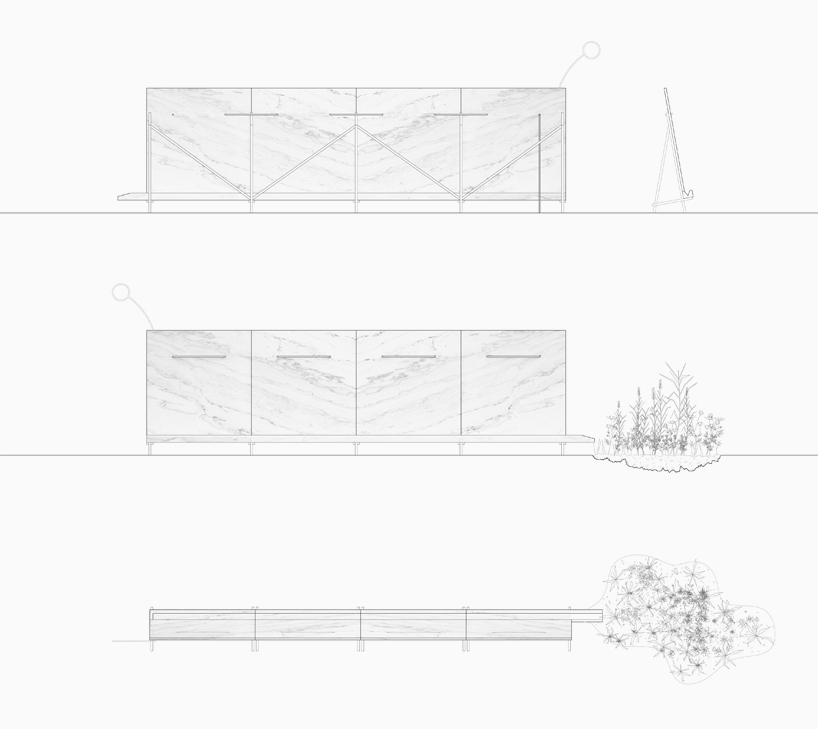 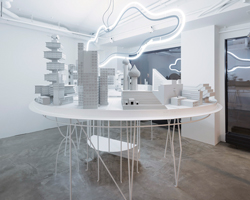