the izolyatsia center has just opened in donetsk, ukraine, with ‘1040M underground’, an exhibition by cai guo-qiang that explores the industrial and mining history of the region through two installations: ‘monuments on shoulders’ and ‘nursery rhymes’

the izolyatsia platform for cultural initiatives has just opened in donetsk, ukraine, with ‘1040M underground‘, a site-specific exhibition by china-born, new york-based artist cai guo-qiang. seeking to preserve the region’s industrial heritage but encourage cultural development, izolyatsia is located on the site of a former insulation materials plant. cai fills one of the center’s warehouses with ‘monuments on shoulders’, a series of largescale gunpowder portraits of local miners whose production took place in front of a live audience; and a second with ‘nursery rhymes’, an installation of old mining carts repurposed to resemble children’s cradles, effecting a montage of film images, found objects, and moving sculpture that compresses the viewer’s sense of history and time.

the title is taken from cai’s experience visiting the coal and salt mines of the ukraine’s industrial donbas region, where he followed a working team 1040 meters below ground level and over 1000 meters deep into the tunnels of the mine. 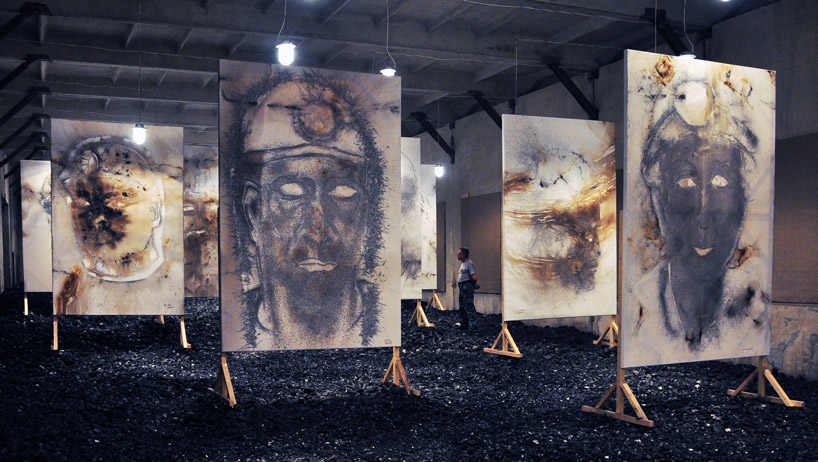 situated in the main gallery of izolyatsia, ‘monuments on shoulders’ is a series of 27 larger-than-life gunpowder drawings, based on portraits that cai asked nine local socialist realist painters to create of 27 different mine workers. cai and a team of volunteers used these drawings as a basis for creating stencils, which were placed over blank sheets and covered in different grades and grains of gunpowder. after layering cardboard over sheet and stencil to control the explosion, cai then ignited the gunpowder below. the works on exhibition are mounted in frames identical to the ones used to hold the portraits of soviet leaders in propaganda parades, set against the light of mining lamps which hang from the ceiling.

documentation of the creation of the ‘gunpowder’ paintings, through ignition (at 6:35) video © izolyatsia 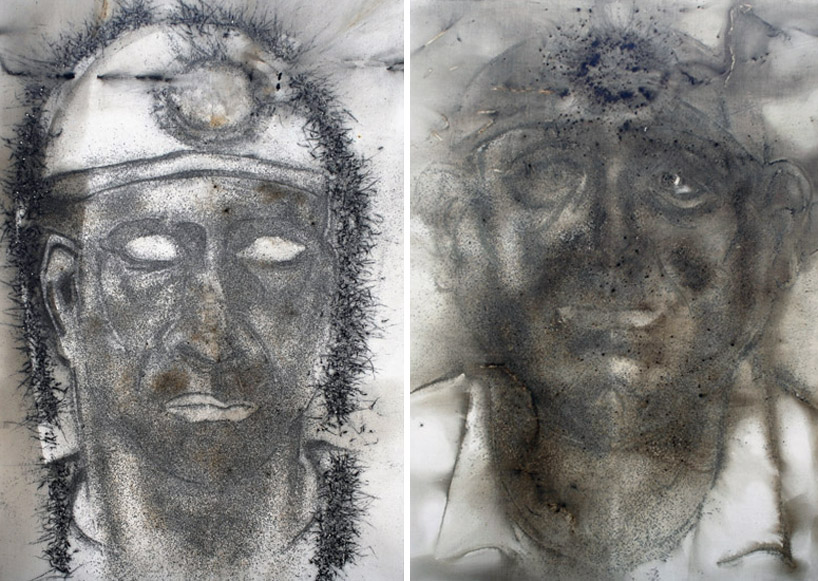 two of the gunpowder portraits

from left to right: the original artists’s drawing; the gunpowder rendition prior to ignition; the completed gunpowder drawing 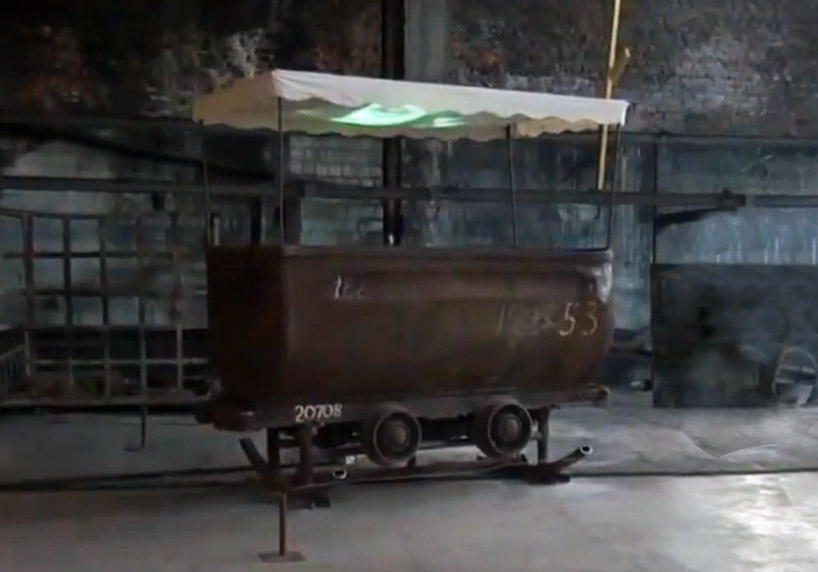 one of the mine carts qua cradle in ‘nursery rhymes’

‘nursery rhymes’ is exhibited in a factory building previously damaged by fire. on an automatically controlled system, nine used mining carts rock slowly, as soviet era film footage is projected unto the underside of their canopies. the films range from depictions of ukrainian musicians and athletes to communist propaganda to art films. on each cradle, cai has also suspended salvaged objects that layer meaning unto each of the film selections: children’s toys, gas masks, war medals, sculptures busts, and musical instruments. artifacts from the factory’s history are also exhibited, including tiny chessboards from the factory kindergarten and old workers’ uniforms and tools.

walkthrough footage from the exhibition, including ‘monuments on shoulders’ (1:18) and ‘nursery rhymes’ (3:24) video © vernissage tv 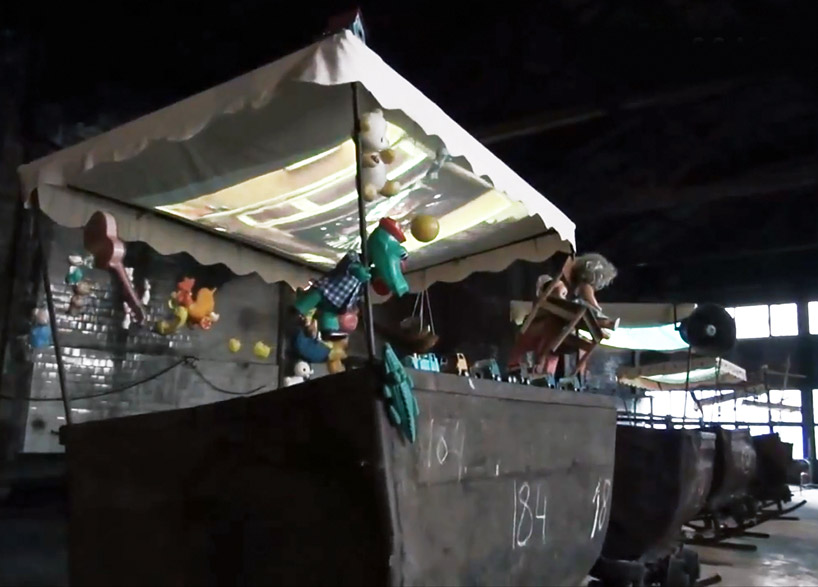 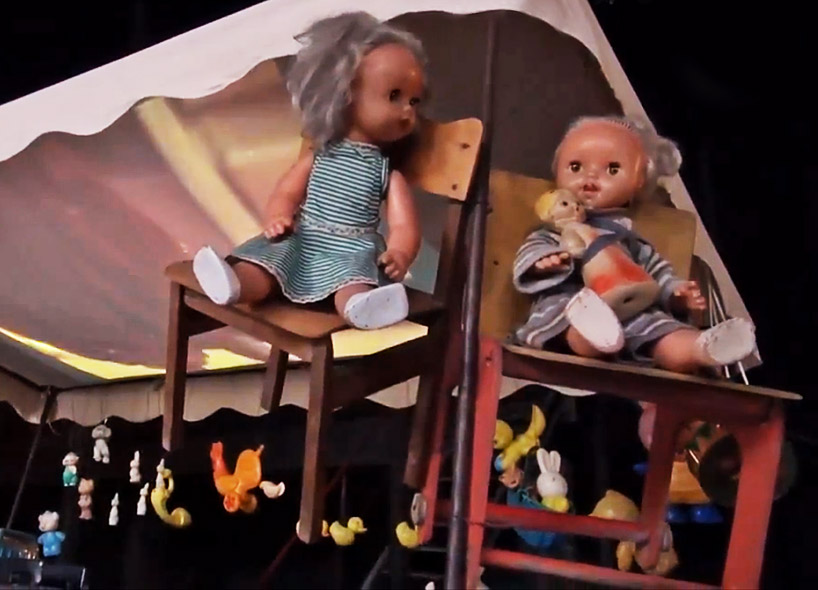 children’s toys hang from one of the ‘cradles’ 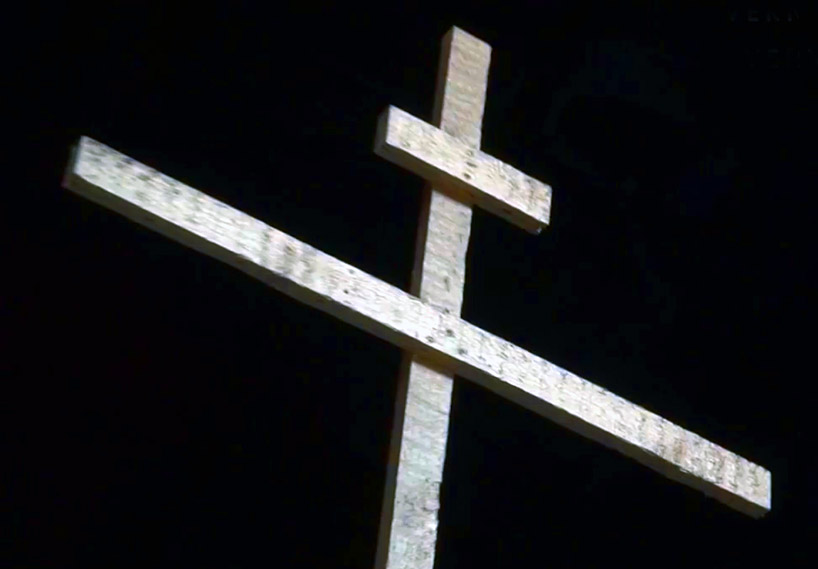 wooden mast atop one of the mine crates 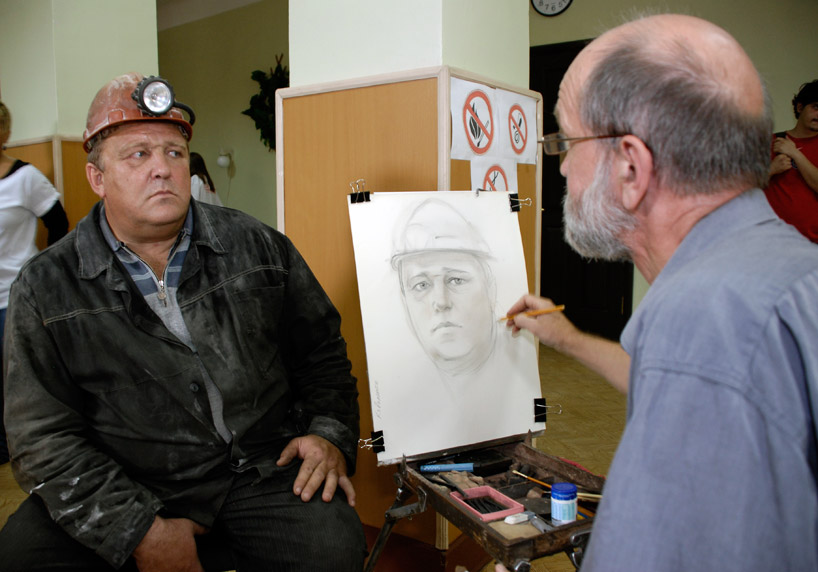 local artist at work depicting a miner, for ‘monuments on shoulders’ 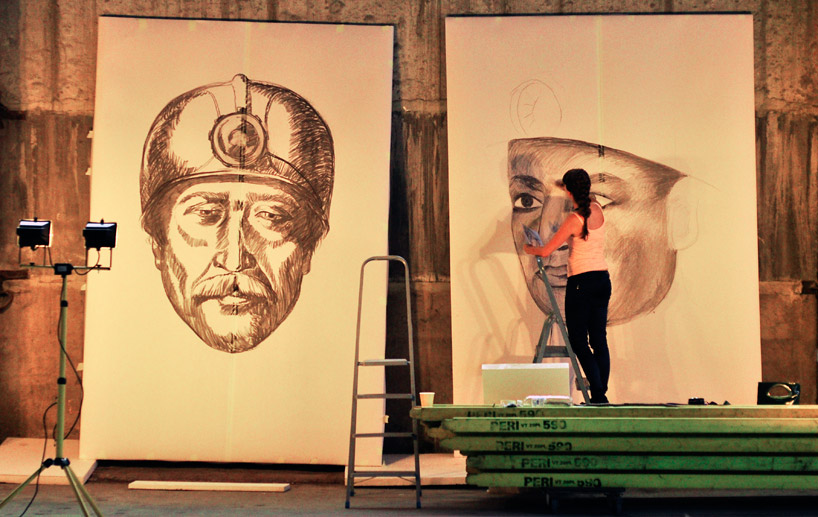 artists at work on the scaled-up portraits 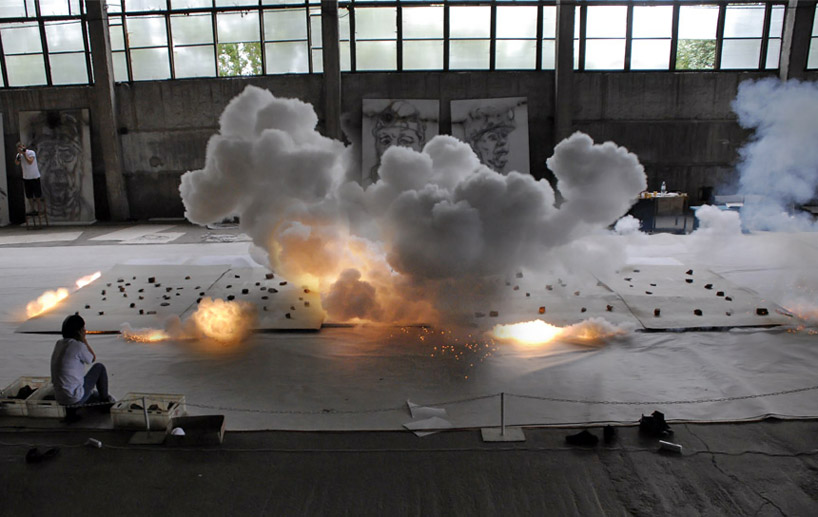 igniting the works to create the ‘gunpowder portraits’ 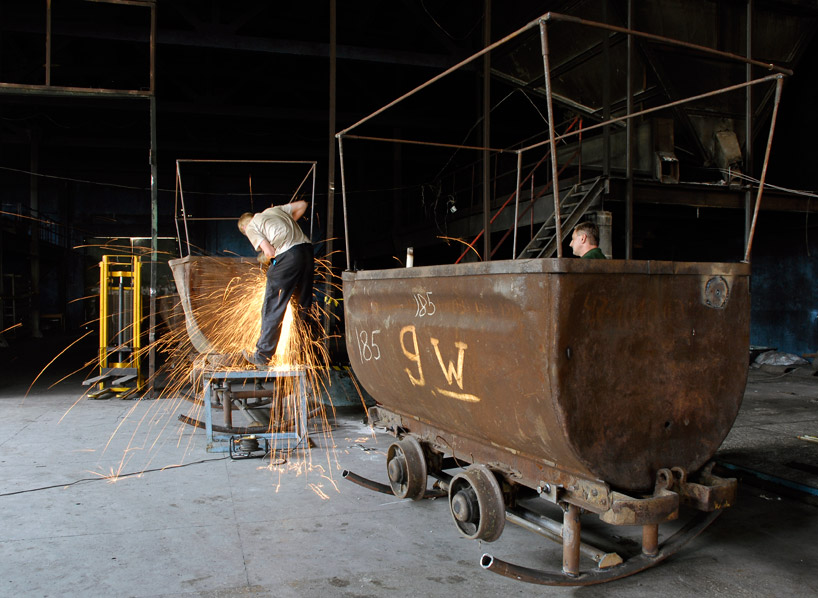